I Was Mobbed by a Gang of Teenagers! 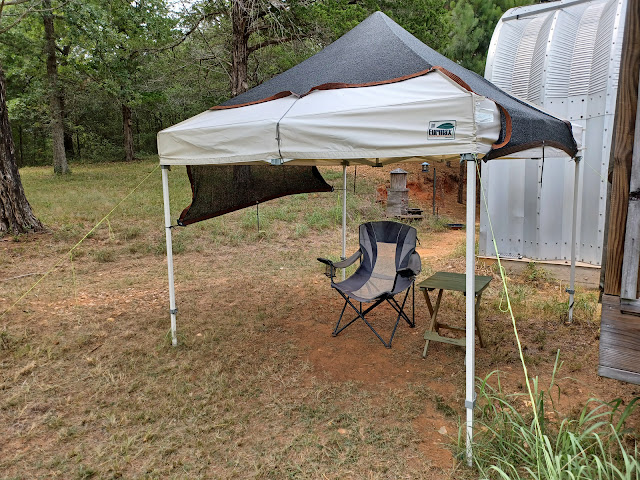 Y'all may have figured out by now that I'm not much one for being inside.

In fact I've talked before about this little set up I have beside the barn so I can relax outside while still sheltered from sun or rain. 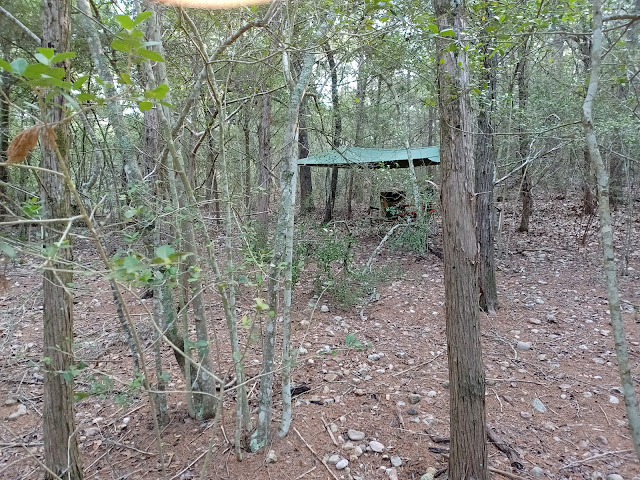 What you may not know - yet - is that I also have a similar little refuge in the woods near the back of the property.

It's about two tenths of a mile from the barn and on the far side of the main ridge.

This refuge isn't elaborate. Just a heavy canvas tarp I had laying around strung up in the trees 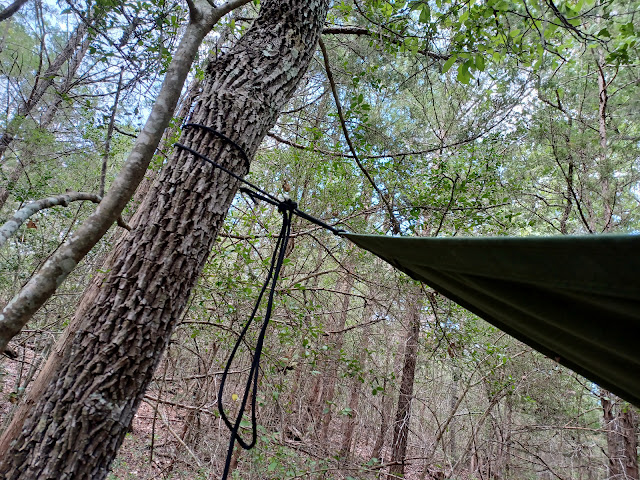 with a mixed assortment of cordage I collected from various scrap piles,

and a couple of old folding chairs. One to sit on and one that serves as a table. (That red one is too straight-backed to be comfortable to sit on anyway.) 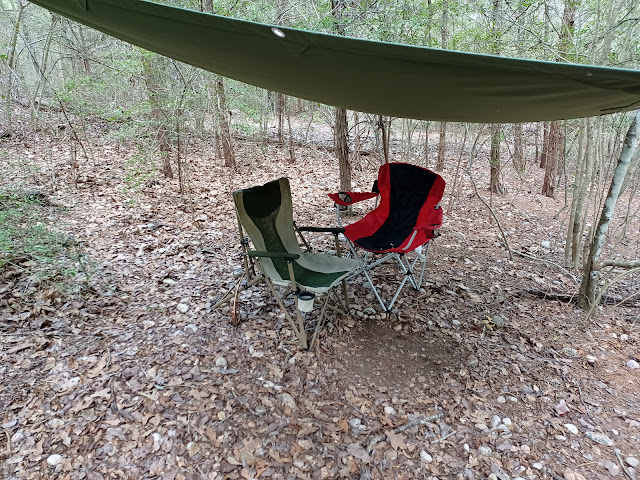 This is where I was the other day.

Just sitting out in the peace and quiet of our woods working through my daily dose of Spanish lesson. 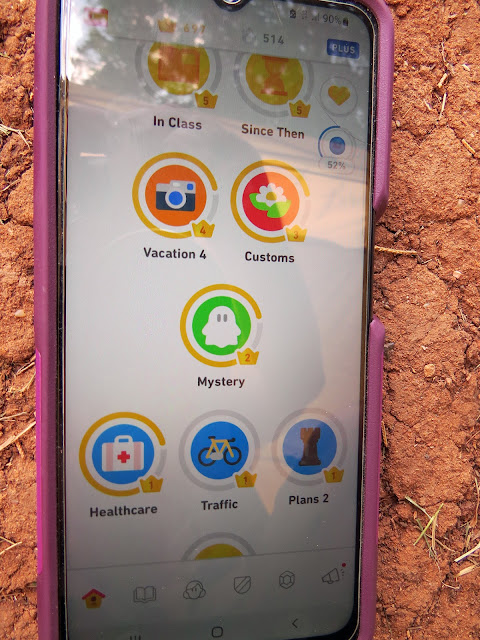 Oddly enough (you will see how this is relevant in a moment) one of the segments I was working on at the time is titled "Mystery".

It is all about killers, shadows on the wall, monsters under the bed, nightmares, and ghosts throwing clothes out the window. You know, scary stuff.

Well normally, especially here in mid summer when winds are hard to come by, other than bird-songs it's really quiet out here in the shelter back there in woods, which is it's main attraction.

But despite the steady stream of Spanish on my headphones and the constant whine of a raging case of tinnitus in my ears that is my perpetual lot in life, (Nope, not rock concerts, but rather work environments) I became aware of a persistent scrabbling going on behind my back - and getting closer!

Taking a quick break from my brilliant mastery of a second language (Or maybe not so brilliant - - - otherwise why would I still be working at it?) I looked up and craned my neck around (I knew those daily flexibility exercises would come in handy!) to see what this intrusion was about because - well, you know - all alone out here in the middle of the woods - - -.

Was it a coyote? 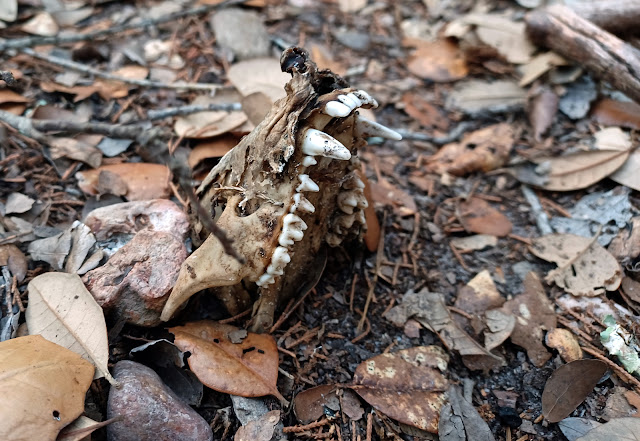 (Three days ago I discovered a fresh raccoon carcass in the middle of one of my trails and this morning this is all that remained, albeit in a rather interesting and slightly scary orientation.) 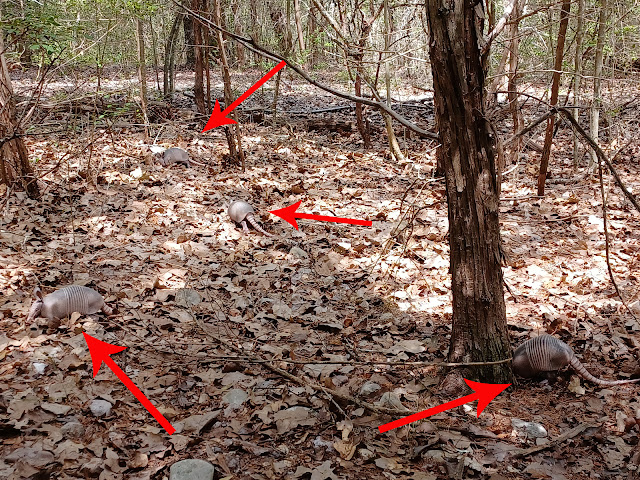 I discovered that I was being mobbed by a teenage gang! 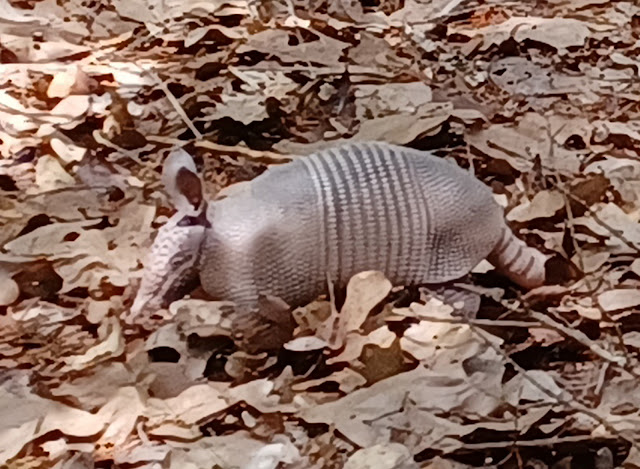 (Apologies for the quality, or lack there of, of the photos. All but the one of the app on my phone were taken with my phone which, not being a $2000 favored-flavor-of-the-current-model-year, has a crappy camera.)

Granted, these guys are only about softball size when curled into defensive mode, but there is nothing more dangerous than a mob of unsupervised teenagers and here I was stranded in the middle of one with no mom in sight! Mine or theirs. 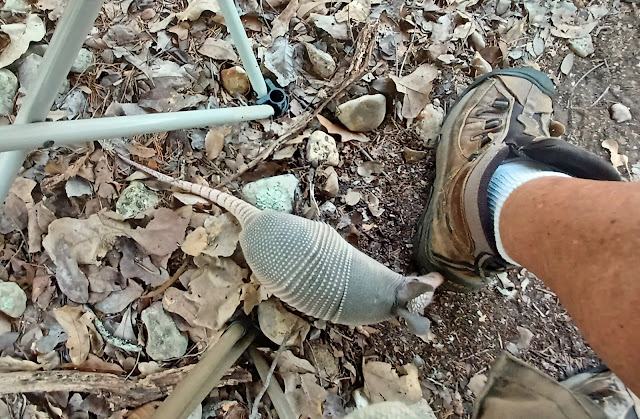 The thing about armadillos is that their eyesight sucks. Even worse than mine when I'm not wearing my glasses! (It's not an age thing. It's always been that way.)

Supposedly they do have a good sense of smell for locating grubs and such and apparently my boots smell like bug (Crap! I hope it's my boots and not my feet!) because this is not the first time I've had one of these armored bulldozers come right up to my feet before they realized that this bug was way too big for their mouth!

Eventually they took their mobbing and swarmed on elsewhere, letting the silence return and leaving me to get back to the business of frying my brain on language. (What do you mean that's the wrong answer? No fair! Trick question!)

Except that later, as I headed back up the ridge to return to the barn and collect my reward-for-a-job-well-done (OK, done, though not always well) of a single fruit popsicle, I nearly stepped on them again right in the middle of the trail.

They stood up and squeaked, I puffed up and growled, and eventually we came to an understanding that let all of us go our own ways with no damage done.

Never a bad outcome after a teenage-mob encounter! 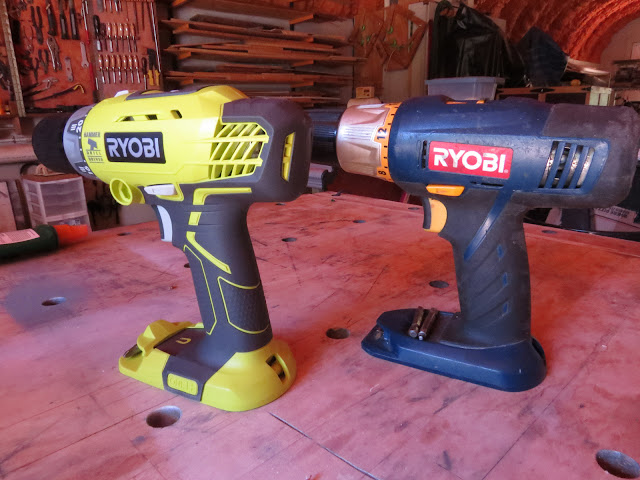 Now this is my kind of catwalk lineup!

Just look at the elegant lines.

The flashy juxtaposition of colors from different eras!

This is the kind of useful, utilitarian lineup worth getting all swoony about!

Far more so than the usual catwalk drivel that only looks good on a certain, limited body-type, will be replaced next season anyway, is only appropriate for occasions that the majority of us will never be invited to, and contributes pretty much nothing to the betterment of society other than moving money from your pocket into someone else's.

Here in our more useful lineup, on the right we have the old guard. Just how old I can't quite remember but I had it before we started building here on the property. So it's at least 18 years ago.

And that was clearly before Ryobi's rebranding of the blue 18 volt tools to the greeny yellow of the ONE+ line of 18 volt tools.

In fact when I first got the blue set, 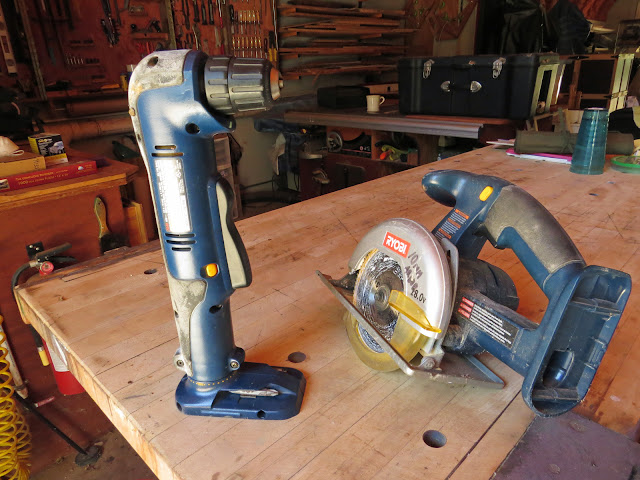 which includes my angle-driver as well as my circular saw, they were powered by 1.4 AH 18 volt NICD's. (Now everything I have, which also includes a wet-vac, is powered by 4 AH 18 volt lithiums.)

So why do I also have one of the new-guard drill-drivers sitting there on my bench? 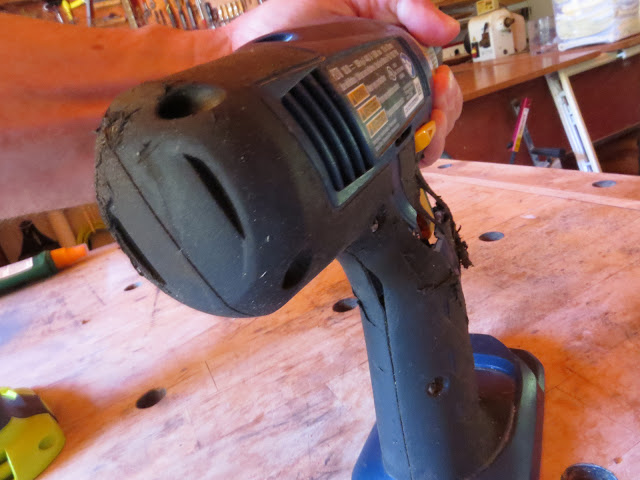 Well, of all my hand-tools the drill-driver is the one that gets used most. And that little 18 volt motor in there is pretty dang powerful and torquey. So after countless screws driven and a few hundred feet of holes drilled that torque fighting against my hand was finally too much for the handle.

The failure was gradual and at first I could still get the forward/reverse switch and the trigger to work if I held everything just right. But eventually the damage got beyond the limits of just-right and I actually had to resort to hand-driving a few screws and dragging out the drill press, because my drill-driver was now just a very awkward manual screwdriver. 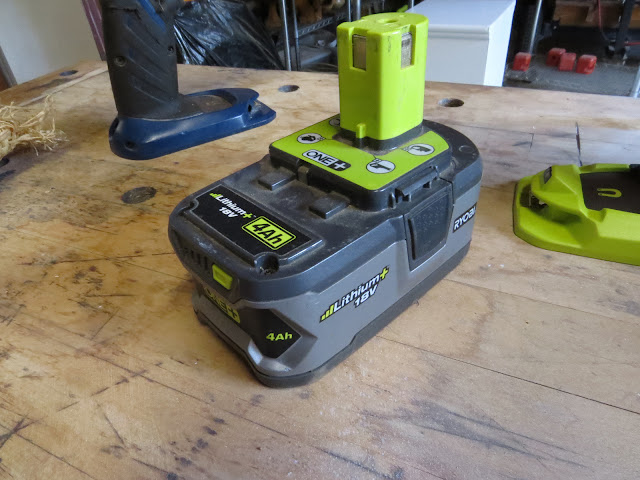 In between the initial purchase and the final failure I went through a couple sets of batteries and am now on a set of two lithiums that are still going strong. 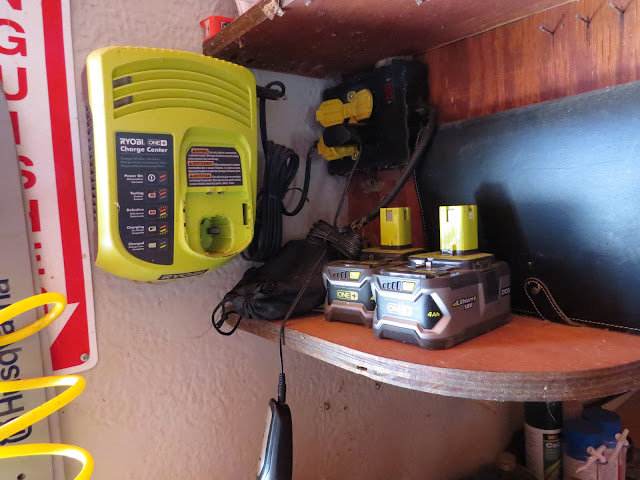 Fortunately, not really wanting to pay for any additional batteries and/or chargers, after a bit of hunting around I was able to purchase, for a reasonable price, (Less than $40) that snazzy new drill/hammer/driver sans battery. (They usually come with 2 AMP hour batteries which are fine if you are close to a recharging outlet but less fine when parts of the property are up to a quarter-mile from the nearest outlet and having enough battery, albeit heavier battery, to get the job done on a single charge is much handier.) 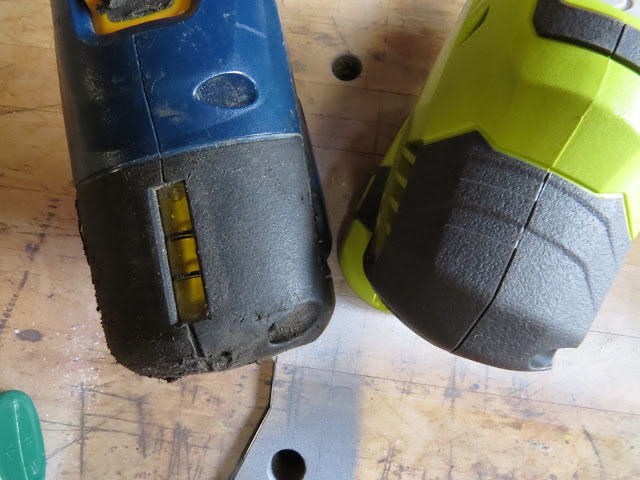 Right off the bat you'll notice that the new unit does not come with the cool little bubble-level that's built into the old one. No big deal, I never used it anyway, relying on eye instead. 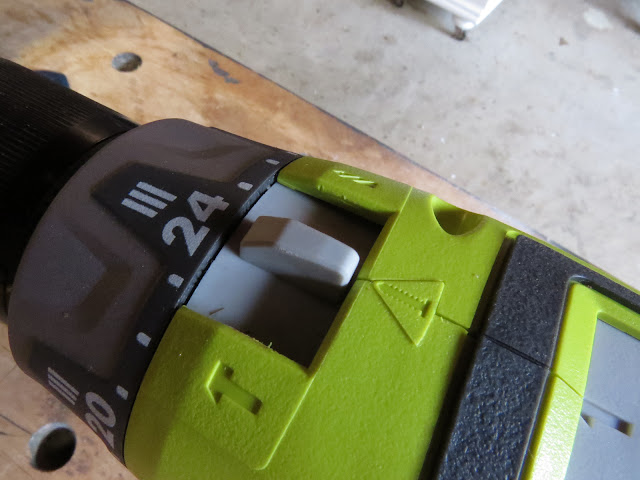 Both have a two-speed switch for changing between fast and somewhat torquey or slow and really torquey. But another difference between the two units, other than color, is that the blue unit had a two position mode-switch on top. One setting that engaged the torque-ring for driving screws and the other which bypassed the torque-ring for drilling holes.

The new unit has a three-position mode-switch on it. The center and far positions (relative to the photo) correspond to the two positions of the blue unit, drive screw or drill hole. The third position, the near one, engages the hammer-drill function for drilling in masonry and tile.

Not sure how useful that will be since I already had a heavier, plug-in, hammer drill for that occasionally used function.

But it's not like I had much choice, as it appears that a two-function drill/driver is no long part of the Ryobi lineup.

I'm hoping that it will loosen up with use, but for now that switch is so tight I have to use a flat-blade screwdriver, the old fashioned kind, to force the switch from either of the two side positions back into the middle. I guess maybe I need to toughen up my thumbs?! 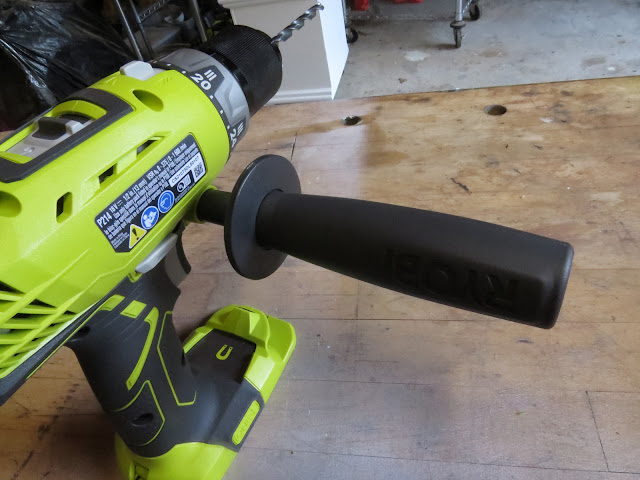 Another feature that was missing in the old unit is this side-handle for really he-manning it when using the hammer-drill mode. 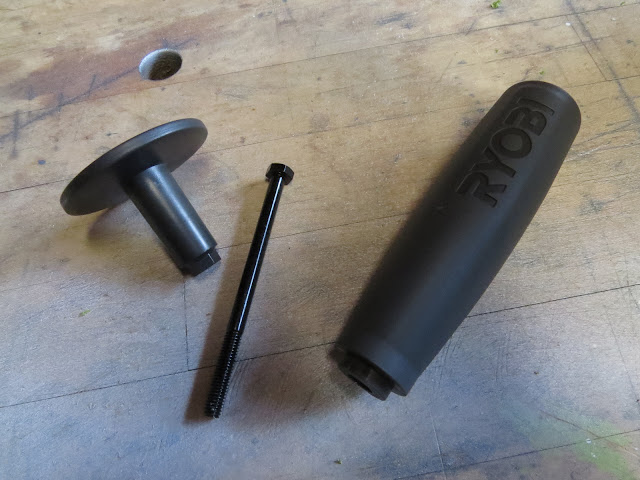 Since it's really just in the way most of the time 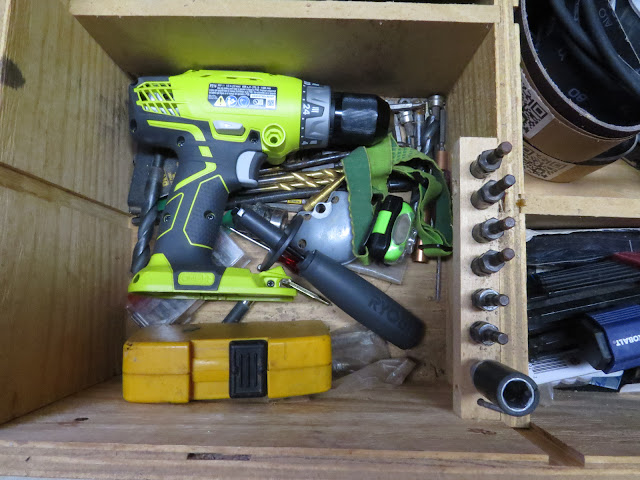 I've removed it and just threw the bits into the corner of the drawer where the drill/driver lives when not in actual use.

Now, it wasn't horribly expensive to replace, but hopefully this is my last drill-driver.

Yet Another Wasted Scream! 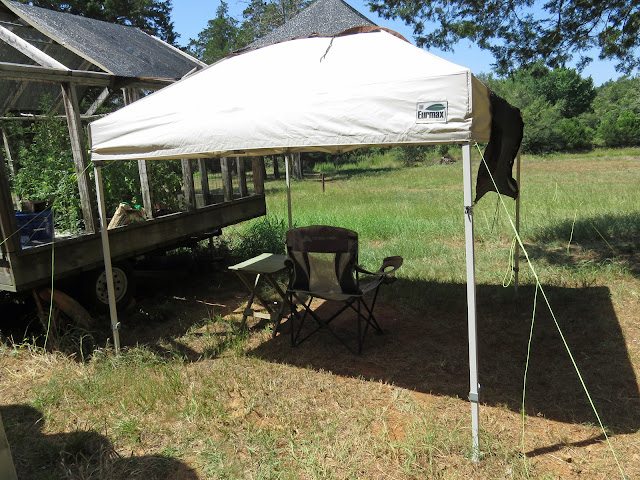 This is my little shelter.
This is where I sit down for an hour or so many afternoons to work on my Spanish lessons. Or to read. Or watch the world go by. 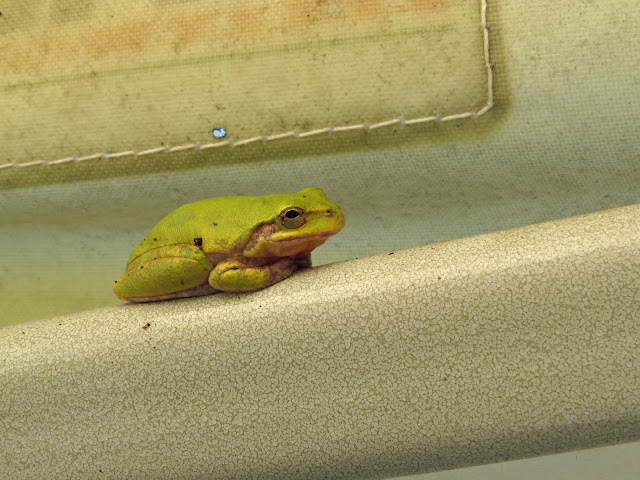 OK, you see this guy?

This is an American Tree Frog.

Neon green and, though not slimy or wet, always cool to the touch, and with suctiony feet that can grab onto just about anything. 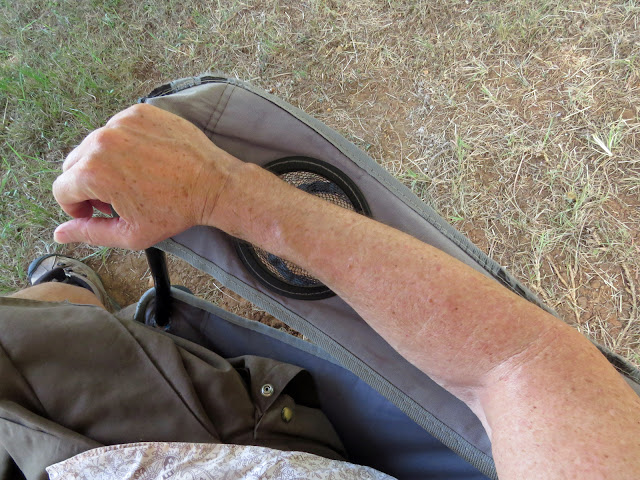 Now, you see this arm? 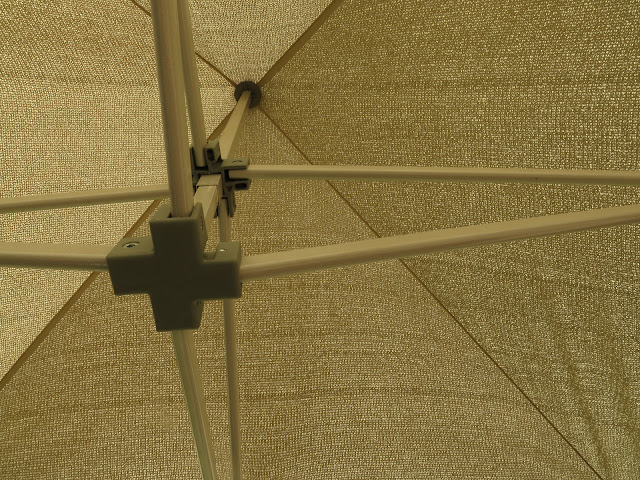 from somewhere overhead, and latched tight to my arm with those suctiony feet despite some heroic flailing and whipping of said arm on my part.

Until I stopped flailing around long enough to figure out what the hell it was, it scared the crap right out-a me!

Now unless you have more than 4 legs and are fly-sized or smaller, the Tree Frog is harmless, so I sure am glad there was no one around to hear my eardrum busting toddler-having-a-meltdown-because-they-used-real-cheese-on-my-Mac-and-Cheese-instead-of-the-powdered-stuff sized scream between the time of the plop and the time I figured out what it was!

If we are issued a finite quota of screams at birth, I just used up one for no damn reason at all! 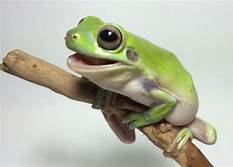 I can't be sure if the drop was accidental or deliberate, but I suspect that latter!

And within moments he'd climbed back up one of the slick metal legs and was perched overhead again as if nothing had ever happened. (Yeah, that's him giving me the I-don't-know-what-you're-talking-about look there in the second photo of this post) 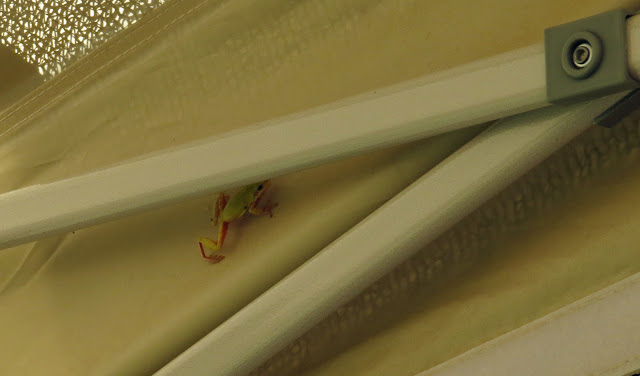