Going Back to the 5 and Dime

I've noticed a trend lately on the Turner Classic Movies channel. You know, that channel that shows black and white classics from the early days of movies. Movies with actors I've heard of but were before my time.

Only lately I've seen some 'classic' titles on the TCM channel guide that I not only recognize, but that I watched when they were new, things like The China Syndrome and the Streisand/Redford version of The Way We Were. 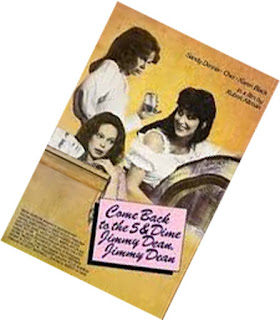 Now this wasn't the shocking revelation of time trudging relentlessly on that it might have been. That happened a couple decades ago when a whipper-snapper little computer operator passed a couple of us in the hall and overheard the subject of our conversation. He suddenly stopped, turned and, with enthusiasm that lacked any respect for his elders, said 'Vietnam? I think we studied that in tenth grade history!'

I'm sure it's happened to all of us, at least those of us old enough to remember The Beatles before they broke up, that blindsiding shock the first time we realize that portions of our lives are now being officially classified as history, but that little kid is lucky we didn't beat him to a pulp right there in the hallway. (OK, so yeah, we might have; if he hadn't easily outrun us. . .)

Anyway, a while back I clicked record on one of those TCM classics that was from my time but I had never gotten around to watching before, Come Back To The 5 And Dime Jimmy Dean, Jimmy Dean. With that list of familiar actors I figured I might as well check it out, some 30 plus years after it's initial release.

Well I finally got around to watching it today and afterwards, as I was reflecting on it, I realized that if I had watched that movie back when it was released in 1982, back when I was 28 and thought I was so grown up but wasn't, back when my daughter was a year old and I was just getting started on a pretty successful 30 plus year career with the same company, that the movie wouldn't have had the same impact on me.

I wouldn't have been able to fully appreciate the significance of the Kathy Bates character angrily screaming out 'I'm happy dammit!', the anguish of Cher's character hiding a double mastectomy for years in fear of loosing her identity. I wouldn't have understood the sense of betrayal and underlying melancholy of the Karen Black character or how the Sandy Dennis character could possibly have deluded herself with a revised version of her past for so long.

As I was sitting there contemplating this I also realized that making me study Ivanhoe in history class or Don Quixote in English class (Which was weird since it's a Spanish novel. . .) only ruined those classics for me. I was way too young to have the kind of experience and personal context necessary to appreciate them at the time, but the memory of struggling through them is still strong enough to keep me from going back and trying them again.

I also realize I made the same mistake with Catcher in the Rye. (On my own this time since in my day many schools refused to keep a copy in the library let alone risk the wrath of the frightened and small-minded by making it required reading,) From where I sit now I realize that the struggles of an adolescent boy are completely lost on an adolescent boy. That it takes time and distance and perspective to fully appreciate the subject matter, regardless of how solid the plot, fine the prose and compelling the flow.

Maybe I'll have to add that one to my current reading list, along with some of Hemingway's, and Golding, and Sinclare, and - - - sorry, got to go. I've got a lot of reading to do.

Seems like for a while there I was on the road when a lot of things happened, but that was bound to be the case given that for a couple decades I spent much of my working life away from home base. Kind of a field-service job with the whole globe as my territory.

With that kind of traveling I was bound to miss a few things. daughter's first steps, a birthday or two, the wife packing up and moving out of the house, you know, the little things. But there were also other notable events that happened while I was on the road, like the bombing of Baghdad in '91 and the fall of the Berlin wall in '89.

In the case of most of those events, I no longer remember exactly where I was when they happened, just that I wasn't home.

But I do know that on Jan 28 of '86 I was in Lafayette Louisiana at the Unocal data center fixing something or installing something or just checking on things. Though not my home base, I spent so much time there that the hotel staff at HoJo's knew me on sight and often gave me one of the 'office' rooms, suites that included a small meeting/office area, for the price of one of the cheap rooms. 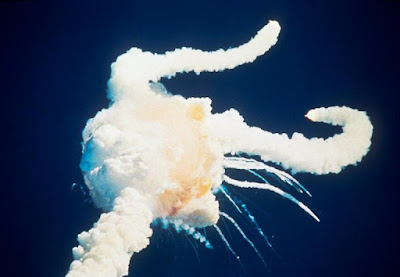 I was there so often that one trip bled into the other and I can't give you specifics about any of them, except for that day.

That was the day I, along with most everybody in the building, spent much of crowded around the small TV in the break room as we watched the Challenger explode over and over again while people, some qualified, others not, tried to explain what happened.

We got no answers that day, in fact it wasn't until much later that we, the general public anyway, knew that the shuttle didn't explode at all but rather was torn apart by the mach 2 airstream as it was ripped away from the failing rocket components.

I felt guilty standing there watching the sudden end of those astronaut's lives over and over again, I felt like a cheap voyeur peering in on a most private moment, but I'm just as susceptible as the next guy to the spectacle of horror, so I watched, and watched, and watched.