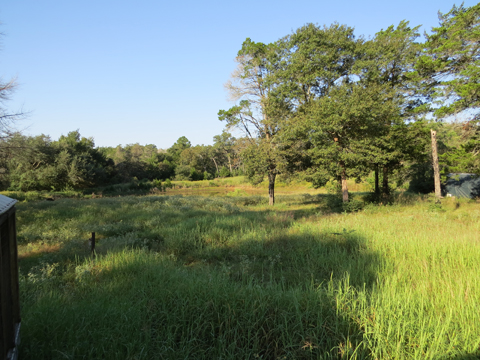 This morning I was taking a 'before' photo out across the field towards the pond for another project I have coming up. 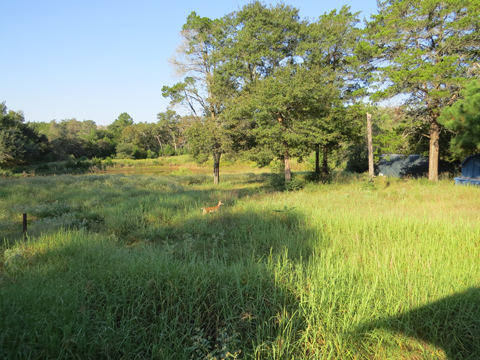 Just after I snapped the first photo this little guy comes prancing into frame. (Look right in the center.) 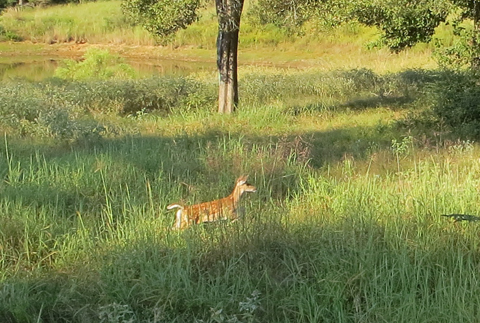 You can see in this crop of the previous photo the way he/she's almost pointing, like a hunting dog.
Well, over there next to the well-house, the blue, barn shaped building partially visible on the right edge of the un-cropped photo above, is another deer. 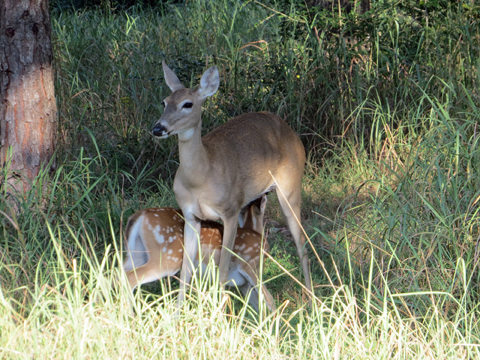 And apparently they are related. I've seen them around for several months (After a while you get to recognizing individuals by the scares and blemishes they carry.) and I'm kind of thinking this is actually not mom, who is significantly larger, but rather sister, but hey, hungry is hungry! 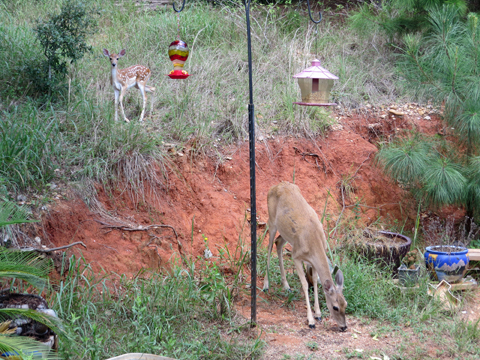 Here's another shot of the two of them from a few weeks ago. Mom is out of frame hanging out in the treeline above the top of the photo. Here you can see the scares on sister's right side, just behind her shoulder. 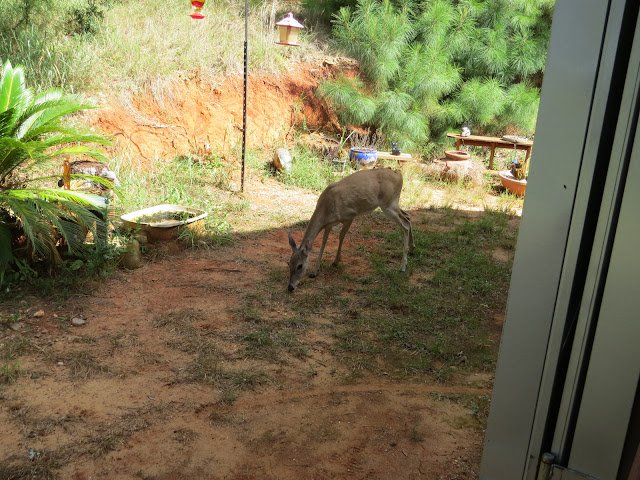 Sis is pretty dang bold. This shot give a better idea of where I'm standing, which is at my computer desk just inside the barn door. Here she's about 15 feet away and yes, though the main attraction is the seed the birds have thrown out of the feeder, on occasion she has threatened to kick my ass unless I throw a fresh handful of corn out there as well.


OK, it's been a couple days now but I've been busy with other things, and to be honest I figured someone else would post something spectacular by now. After all, I follow a number of blogs of outdoorsy type people and this was kind of a big deal, or at least I thought so, but so far, nothing. . .

I mean personally I was out there the night before setting up my tripod and taking some test photos, (Seriously, does the world need any more full moon shots?? I think not. . . unless that's also something that comes in a glass. . . and I'm talking about the drinking kind of glass not the glass in the bus window.) figuring out the best settings on my Cannon SX50 point-n-shoot as well as determining where to best put the tripod and approximately what azimuth and altitude to point it.

I tried to do all that Friday night but it was a day of high overcast that didn't clear in time.

Saturday wasn't looking too good all day either, but just after sunset the sky cleared and the nearly full moon was hanging up there bright and sharp. At a little after 8PM local time I was out there sighting the camera in and putting tape down next to the tripod feet in case I, or a racoon or something, bumped the tripod in the 24 hours or so before the next shoot.

Sunday, daytime: I kept a close eye on the sky, the Weatherbug radar, and the wundergroun water-vapor maps all day. Things were looking bad and I actually checked to make sure we had the NASA channel on our satellite lineup, but let's face it, watching something like this on TV is just not the same as seeing it live! It's my conspiracy theory that that's why there are so many conspiracy theorists that don't believe we actually put men on the moon. If we had just shot a few of them, screaming and kicking, into space and booted them out onto the moon's surface, let them put their own boots on the ground as it were, that whole conspiracy debate would have been a non-starter.

Sunday: moonrise: Absolutely nothing. (Does anybody else find it disturbing and shortsighted that my spellchecker recognizes sunrise as a word but not moonrise??? I think it's some sort of conspiracy. Maybe I should start a web site to get the word out. Oops, no pun intended, honest!)

Sunday: T - 30:  Still nothing, not even a lightening of the thick clouds. Things are not looking good. . .

Sunday: E S time (Eclipse Start time): Is it posible that the sky is lightening a bit??? Aw shucks (Here I turn and kick at the ground.) prob'ly my 'magination.

Sunday: E S +10: I can actually see a fuzzy moon! It's either that or a landing light of some lost airliner headed right for me. I'm hoping for the former because I'm telling you, the latter would just ruin an already sketchy evening.

Sunday E S + 20: Oh wow!! Clear!  OK, so maybe not exactly clear, but pretty close and I'm running out of time!  Snap off a dozen or so shots. All of which look pretty much the same when played back on the camera's LED screen, (I didn't want to demount the camera to plug it into my laptop.) but never mind, you can't have too many shots!

Sunday E S + 30: The haze has thickened, the eclipse is pretty much full, and I can barely make out the moon with my naked eye, which means I had zero luck capturing that nearly invisible object some quarter million miles away in my viewfinder no matter what zoom level I tried. I don't know what happened to the blood, part of blood moon, but all I have up there is a faintest hint of a shape, black on black, and for all I know I could just be looking at one of the motes in my eye!

Sunday E S +70: I should soon be able to see the other side, the left side, of the moon as the eclipse starts to release it's hold. I said I should be able to, but I can't. The l*^%$ ffrassing clouds have completely shot-blocked me, and at my age I can't afford to be anything-blocked because desire, function and opportunity just don't coincide very often anymore, and I don't see that improving any time soon!

Of course come 0330 the sky is crystal clear and the moon is sending taunting moonbeams through the window, across the floor and right into my eyes, but by then all the excitement was long over. (I won't comment on the fact that now, awakened by the moon, I have to lay there, hoping against hope that I will fall asleep again, as I listen to the wife snoring beside me, because, well, that would be indelicate of me. . .)

Let's see, the next supermoon eclipse isn't until when?  2033! Oh crap! On my 40th birthday, slightly over two decades ago, my brother blurted out that I was halfway to dead. Looks like I'm going to be cutting things close!

So after all that, all I have to show for this rare event is one crappy photo, shot through light haze with my 12.1 MP Cannon SX50 at full optical zoom in high-dynamic-range mode. 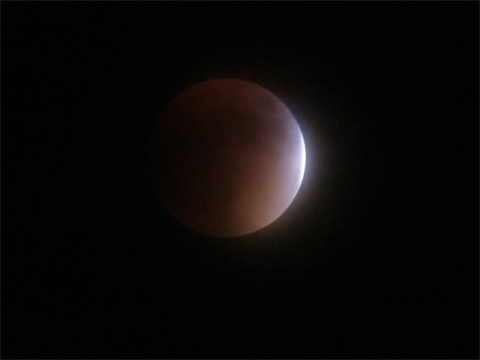