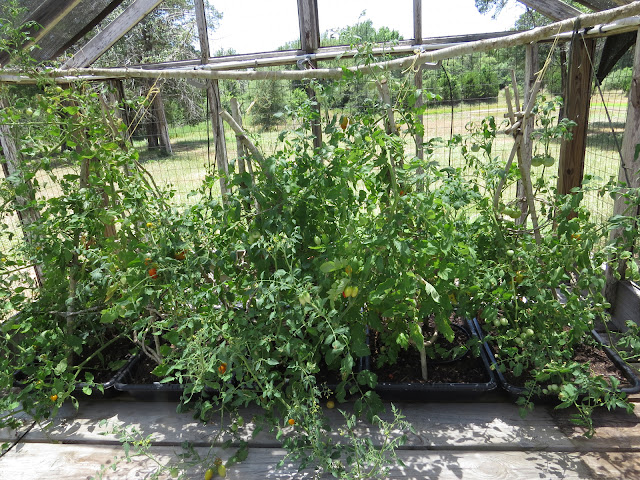 It's June 23rd as I write this and though they have retreated a little from their grandest, all five varieties of tomato are still producing.

But I'm not surprised - about the retreat that is. Here it is with still a week left to go in June, with the full heat of summer yet to "look forward to" (late July through August) and we have already surpassed last year's total number of 100+ degree days. (According to the thermometer right here beside me it's exactly 99.9 degrees at my computer desk out here in the barn as I'm writing this at 1400. Oops, nope. Just switched to 100! - now 100.2!)

In fact so far this month we've had a grand total of two days of sub 100 degree highs.

Since sometime in the last week of May we haven't had a single day that hasn't been above average temperature. Also, so far this month there has been zero, as in 0, rain. 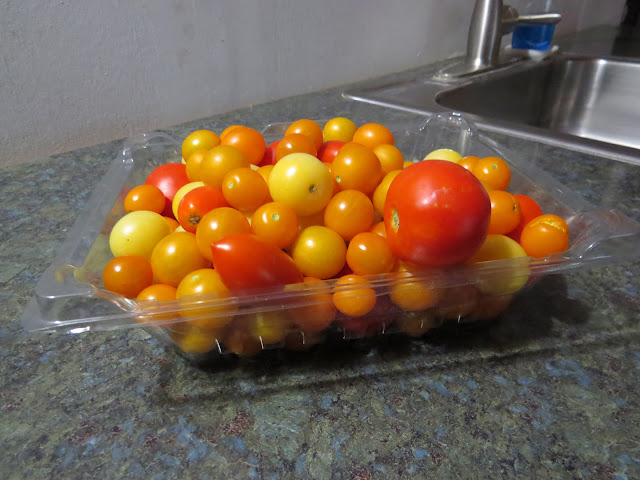 But that hasn't stopped production yet! 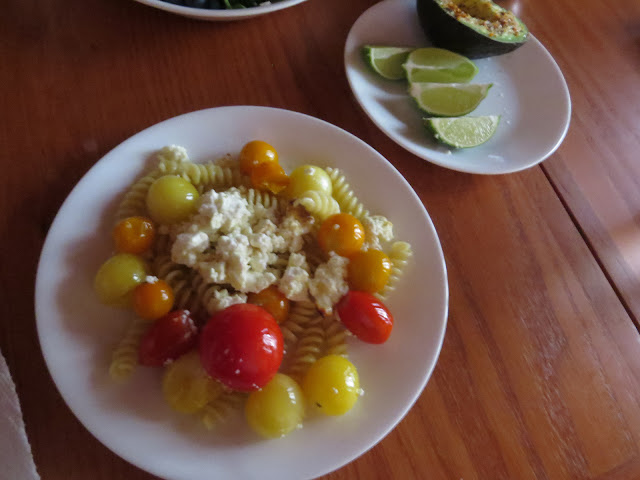 we have been eating a lot of pasta-tomato-feta meals!

Boil up a little pasta, and while that's draining toss the tomatoes and feta on a baking sheet, drizzle a little olive oil and slip them in the oven for a few minutes. Just long enough to drive some heat into them. Combine with the pasta and eat till your stomach hurts!

I anticipate this being the final tomato update because I just expect more of the same, or a little less, from the plants for a few more weeks, then they will start to shut down due to stress until we have to caramelize the scant sugars under the broiler to knock down the bitterness in the last of the green tomatoes.

The bright red oblong Juliet got off to a slow start and showed early signs of blossom end rot but once it hit it's stride it has produced well and contrasts, in both flavor and color, nicely with the Golden Nugget/Sungold Cherry so it too has a spot in next season's lineup.

The Balls Beefsteak was alright, producing a lot of larger-than-golf-ball, smaller-than-tennis-ball fruit that also has a good, if robust and sharp.almost lemony, flavor even when green (A few green ones got knocked off the vine and I didn't want to waste them!) but wasn't anything spectacular so probably won't make it off the bench next season.

The Italian Ice was slow off the mark and confusing to those not familiar with it since the fruit went from green, to crisp and strongly flavored greeny-white, to tender and really sweet whitey-gold. It is producing well and we really like the flavor-contrast with the other tomatoes so it will definitely make the team next season as well.

Who will make the draft to fill the gaps next season?

(Dirty) Dancing in the Workplace 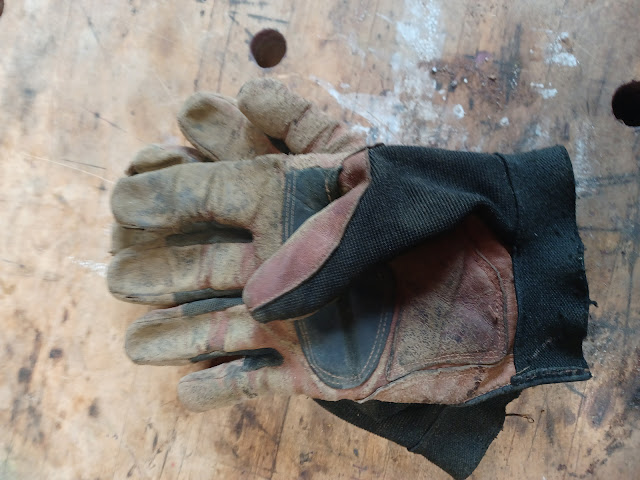 I don't remember how many years I've had these. They were a Christmas gift from Mom. (I know it was her because apparently none of us in this family quite get the concept of 'Secret' Santa - - -)

Good gloves, and after all these years and a lot of service, well broken in and comfortable. 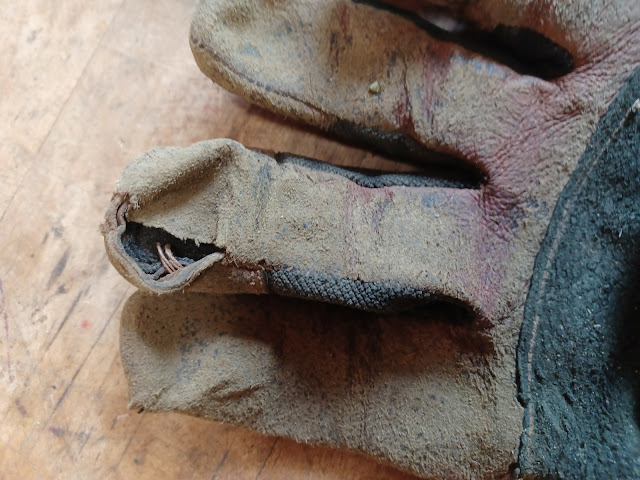 But nothing lasts forever and there comes a time,

in this case marked by some rather intricate, prolonged, and colorful - as in mostly blue, and rather strong blue at that - dancing at the worksite, (I didn't even know I knew some of those words!) 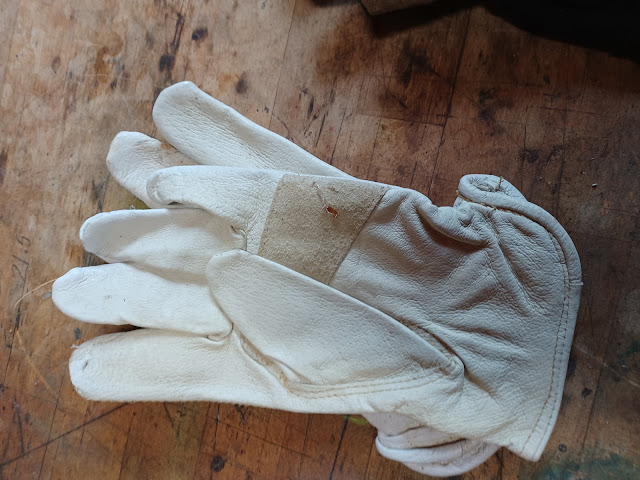 when the old must be retired and the new and untried reluctantly sent in off the bench. 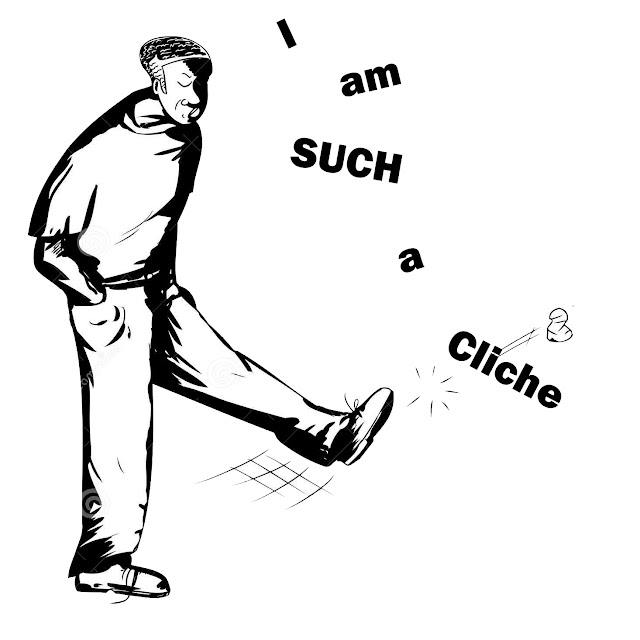 It's often used as an insult.
Personal or otherwise. 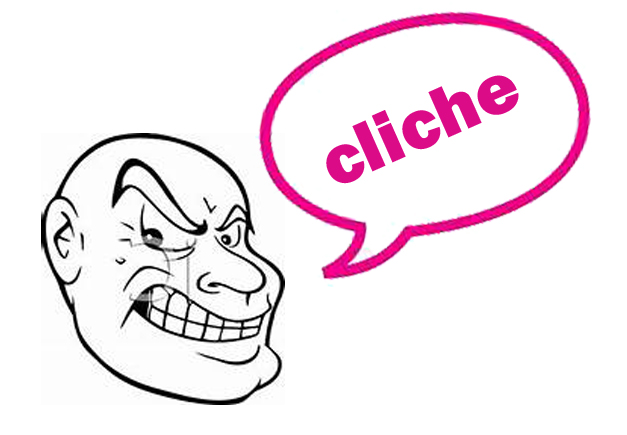 It even sounds like a sneer when said out loud.

Almost onomatopoeic, but not quite. (Hey! don't look at me if you can't pronounce that doozy. I can't either. Besides I'm not in charge of making this shit up! Nobody asked me what we should call words like plunk or cackle or flick that imitate the sound they describe!)

I'm not sure if there's an inclusive term for words that are typically said with an attached emotion. Words like 'sleazy' or 'magnificent'. But come to think of it, 'sparkle' is another one of those attached emotion words that doesn't actually sound like it's definition yet it is often included in lists of onomatopoeic words, so maybe 'cliche' is onomatopoeic.

Regardless of all that crap, which is only important to linguists, the origin of the word - you know, cliche - is slightly fascinating - even if its origins are French. 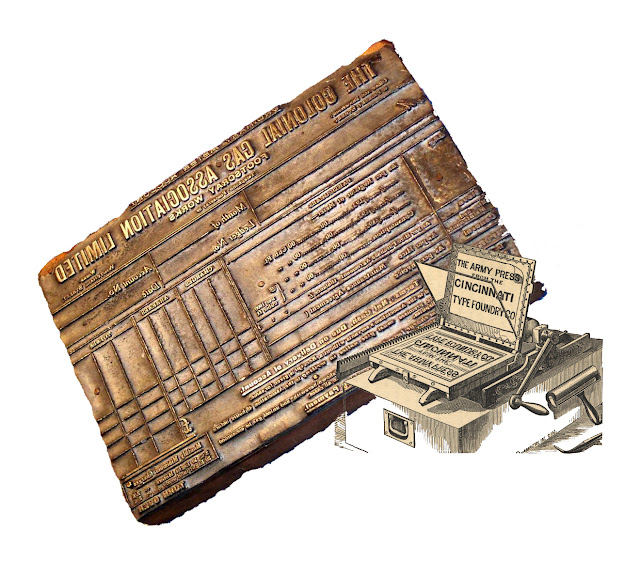 Those big cast iron plates that hold the reversed letters and/or images on printing presses are called stereotypes.

Then - and here's where we get to the French bit - the sound a stereotype makes as it slaps down against the paper on the platen is a click - or in French, a cliché. (OK, I make no secret of the fact, after having been forced to work with them for a number of years, that I am not a particular fan of the French culture so I'm not going to pass up the opportunity for such an easy dig: - Leave it to the French to screw up an otherwise perfectly good onomatopoeia!) 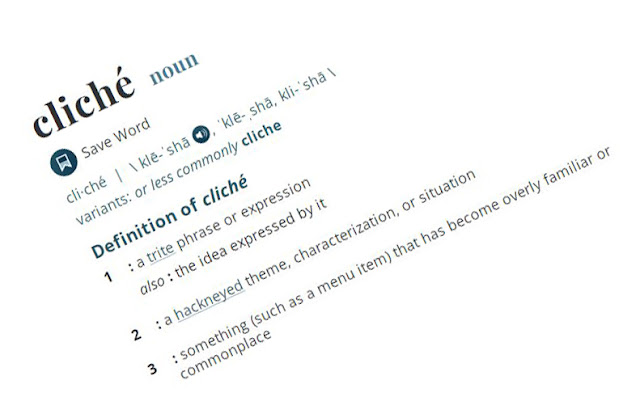 22 years ago William F Buckley Jr. in attempting to make a point about cliches, was quoted in National Review as saying "Non-amateur writers avoid industriously the word Orwellian".

First off, I don't know who he was trying to impress with his hackneyed reversal (See what I did there?) of the positions of  'avoid' and 'industriously' since, unlike Spanish and other romance languages, in the English language (and Buckley would be the first to tell you he was American through and through) the adjective, in this case 'industriously' is most commonly placed before the verb 'avoid'.

Secondly, his pretentiousness is showing.

For someone who's stock-in-trade was words, both written and spoken, his dismissal of the effectiveness of the cliche is baffling.

Orwell was another wordsmith that dissed cliches, (Can you see the irony here!) writing in his Rules of Writing to 'never use a metaphor, simile, or other figure of speech which you are used to seeing in print'.

Well have you ever tried reading either of these men? It's painful! A real slog where you can never get any momentum going because you are constantly having to stop and decipher just what the heck they are saying.

Language is, first and foremost, a tool for communicating, for sharing information.  And shorthand of any sort, be it the classical, squiggly form, or that used in today's electronic communications, (LOL. WTF) is an efficient way of communicating. And cliche's are the shorthand of words. 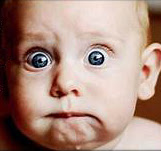 For instance "heart stopping fear" is considered a cliche by those nebulous word-police because it is "over used" (my air-quotes.) But most everyone, sometimes from a very early age, has a personal acquaintance with the visceral effects of heart stopping fear and knows exactly what the writer is describing. If we eliminate that three-word shorthand from our vocabulary it will take several sentences to replace it with something that probably still wont have the same emotional impact because it took so long to get there.

And, since I've already touched on it, almost every English-speaker, at least of my generation, knows exactly what is being expressed in that single word 'Orwellian'. Yet it will take Buckley's 'avoiding industriously' non-amateur writer, such as George Orwell himself, half a book to express the same concept. (He used the other half of the book to detail how to fight back against such a dystopian situation.)

Now I'm not saying there aren't some cliche's out there that need to be retired - badly.

For instance, "If you don't like the weather here in <insert your location> just wait 5 minutes!", usually said with a heavy dollop of perverse pride.

Oh man! Can we just make this spindled, mangled, and abused cliche go away already?!!!

With the exception of a few isolated places, like maybe Southern California, the weather changes quickly all over the world, but wherever I have been in that world I hear this annoying, useless banality repeated over and over again, and every time as if this was the only place in the world that happened.

But there are so many other, useful cliches out there that deserve the respect they don't often get. 'Mad as a hornet'  is so much more evocative and elegant than 'really really mad'. 'A dead ringer' is so much more efficient than 'she looked and acted so much like that other person I couldn't tell them apart'. And, ironically, 'A stitch in time saves nine' takes so much less time to make the point  than 'if you slow down and do the job properly the first time you won't have to come back and redo it again later'.

Gerard de Nerval said "The first man that compared a woman to a rose was a poet, the second an imbecile."

That second man was an unpretentiously effective communicator.