He was trying to protect someone else by talking a gun-wielding man down, a man The Nephew had given a place to stay. The man shot The Nephew instead.

The Nephew was a complicated man who didn't do the best job of taking care of himself, but would give the shirt off his back to help others, including those the rest of us do our best to avoid.

Violent events like this can cut some of the fragile strings that keep us stabilized within our world and that's a helpless feeling, but The Wife, while casting around for some small thing she could do for her sister in the middle of dealing with all this, came across OandBstudios where Vlado will, for a very reasonable price, turn an audio file into a personalized soundwave print.

Vlado works with you, collecting the necessary information and sending samples for approval or revisions, to turn your audio clip into a customized high-res JPEG that you can then have printed on paper or canvas. (He includes two separate JPEG's in the final product, one is for a standard print the other has an additional 1.5 inches on each edge for printing a museum-mount canvas.)

While hunting for an audio file The Nephew's other Aunt located an MP3 of him singing a song he was working on while accompanying himself with guitar. It was a work in progress and now progress has been halted, but in the song, which he titled Our Shining Light, The Nephew sings "Can you see my shining light." which seemed fitting for the circumstances.

(I wanted to include the MP3 here but it turns out that is complicated and involves creating yet another site on an external host, which I'm not inclined to do since I already have more than enough of an on-line presence to feed my paranoia.) 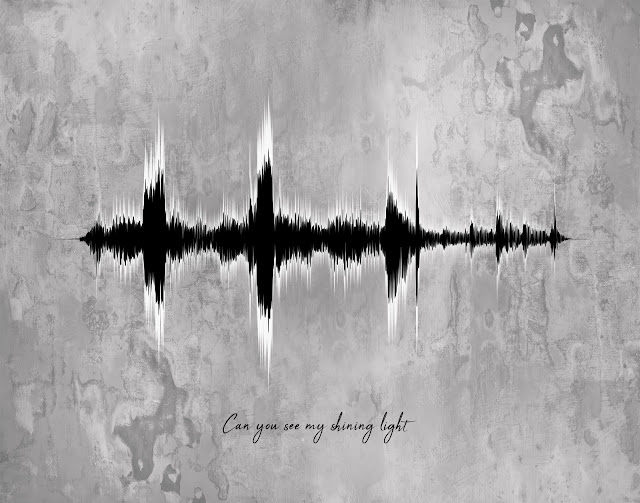 This is the customized image of The Nephew's own words in his own voice.

We sent the JPEG off to CanvasPop to be printed and mounted. Everything went off without a hitch and The Nephew's mother now has it hanging in her hallway.