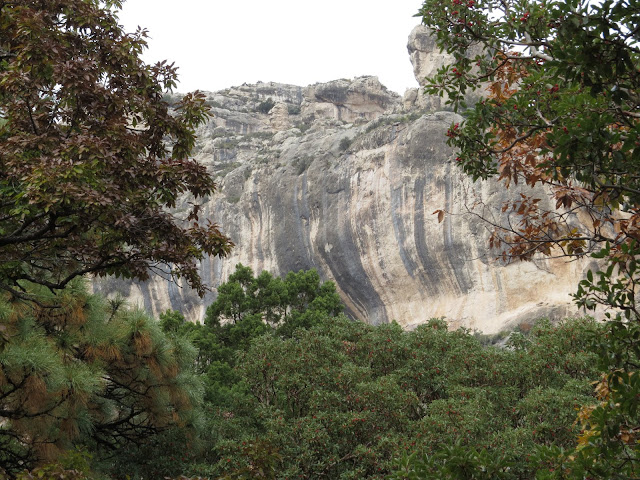 By the time I finish lollygagging over lunch at Smith Spring things have cleared up quite a bit. As in the clouds have lifted off the mountain enough that I can actually see more than just a handful of feet in front of me, though it is still overcast which is muting the colors.

Of course the new and expanded view reminds me of how much mountain there is up there, and I swear I can hear it taunting me, ("That's right old man, I dare you to try me!") 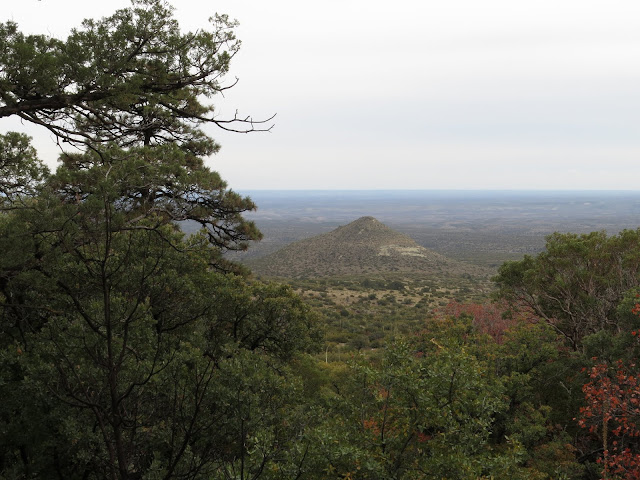 but at the same time, by turning around and looking east I can finally get an almost-glimpse of the Permian Basin spreading out to the east. This is the area that used to be the sea along the shores of which the Capitan Reef behind me formed.

In 1921 the Permian Basin was described by Wallace Pratt (I'll come back to him many posts from now.) as a 100 mile " road-less trek" between Pecos TX and here.

Today the basin is a dry morass (Yeah, I know, since a morass is technically a swamp/bog/slough/quagmire, by definition it can't be dry, but the other, implied, definition of morass is mess/confusion/chaos/muddle, which fits so well I couldn't resist using the word.) of oil-wells, temporary impoundments, (built with tarp-covered earth-berms filled with trucked-in water used for fracking) drilling rigs, pipeline pumping stations, equipment yards, flair towers, and a complicated, unmapped web of roads and tracks over-populated with commercial vehicles of every description, all trying to get wherever it is they are heading in the shortest possible time resulting in many scary encounters and ridiculously beat up roads. So unless you work the oilfields it may be best to give the heavy traffic, potholes, (Tire shops in the remote and scattered towns are doing a booming business!) near misses, and ridiculously expensive lodging a miss for now. Give it a decade or two and things may improve.

And yes, in case you are curious, the official name of that feature out there in front of me is Nipple Hill. 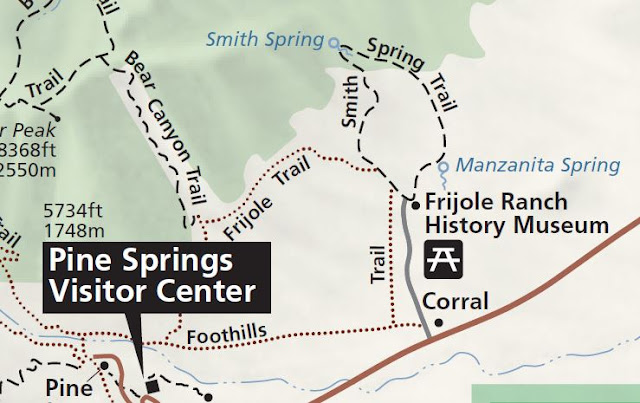 Now that lunch is history I have a choice to make.

Either backtrack the way I've come, and a fine hike that would be, I know since I've already done it, or head on down the eastern leg of the Smith Spring Trail to the Frijole Ranch History Museum.

Only thing is, the museum has no set hours, instead it is posted as "open intermittently - check at the Pine Spring Visitor's Center". 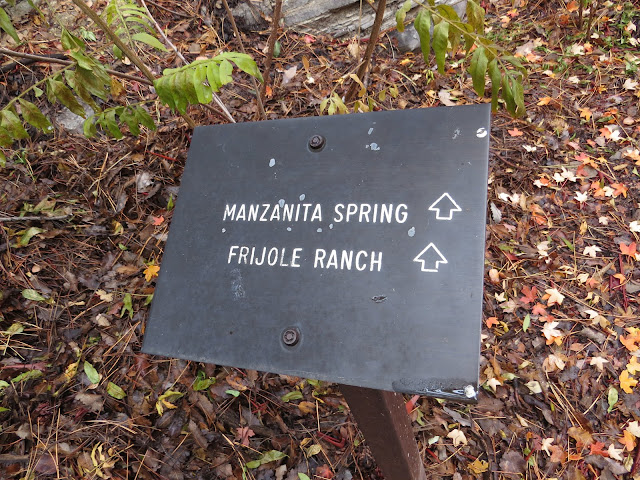 Well the visitor center is farther from where I'm standing right now than the ranch, so I decide to take my chances.

Besides, there's yet another spring down-slope from here, between me and the ranch, and I want to see if it is as good as Smith Spring.


But before I leave Smith Spring I wanted to show you this.

It's not all wind and water shaping the terrain around us. In fact, one of the oldest plants, lichens, a symbiotic combination of algae and fungi, were the first organic terraformers, releasing acids that break down underlying rock. The main reason lichens do this is to get access to minerals and nutrients locked away in those rocks but a side-effect is to decompose rock into soil. 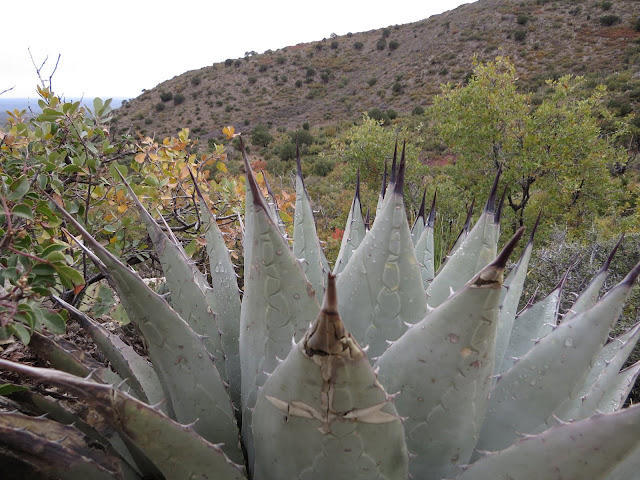 Now that visibility has improved beyond just barely seeing the pointy-thingies before they stick me, 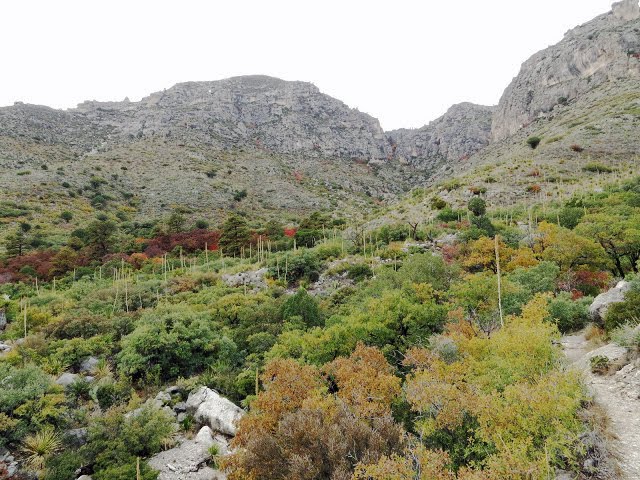 as I hike down towards the ranch I can look back and see what I couldn't as I approached. The swath of trees, many sporting fall colors, (Sometimes I wish I still had my film-camera since digital images don't always seem to pick up the vibrancy of the true colors. In person the fall colors were not this muted.) lining the wash as they take advantage of Smith Spring is quite evident when you can actually see it. As are the imposing ramparts there above the spring. 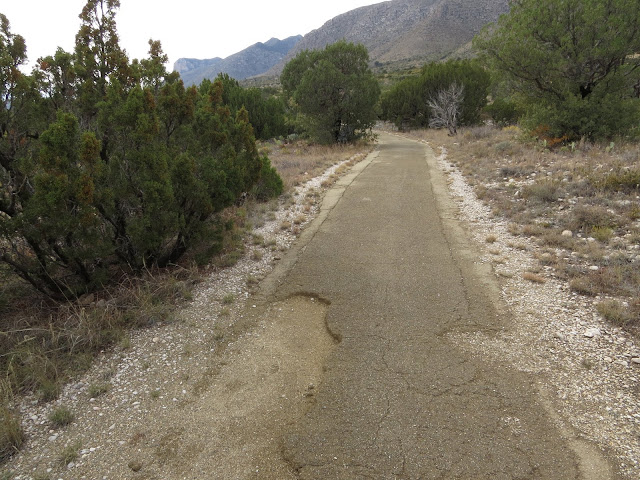 Unlike the trail above this point, the couple tenths of a mile from the Frijole Ranch parking-lot to Manzanita  Spring is paved, more or less anyway, making it accessible for many of the mobility challenged,


but honestly, after chilling out in the glory of Smith Spring, Manzanita is a visual disappointment. I probably should have hiked this loop the other way around to get to Manzanita first, before my senses were spoiled by Smith.

Although, apparently Manzanita made for 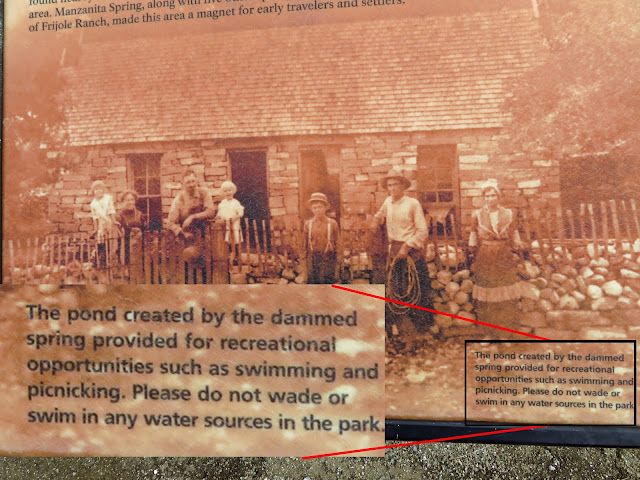 a great swimming hole in its day. 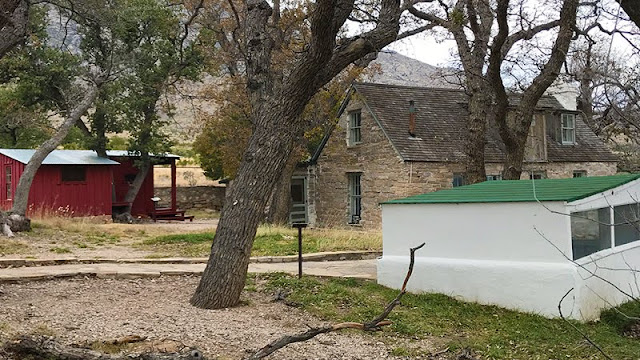 The spring-house is in the foreground here,  the main house behind that, (The unimposing entry door to the house/museum is the green door on the left side almost hidden by the tree and leads into the kitchen) and the schoolhouse to the left. The bunk-house is behind the left-rear corner of the main house. 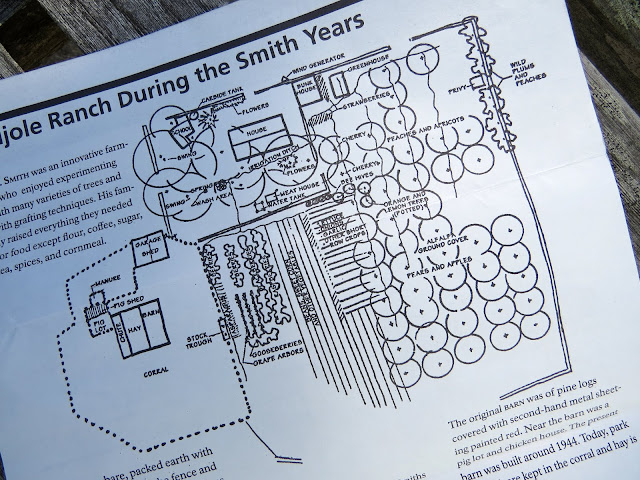 By pure luck the ranch museum is staffed by a volunteer and open when I get there, 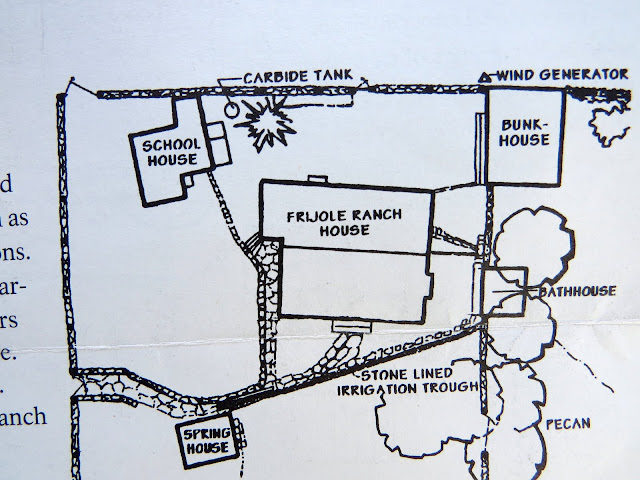 so I'm able to get my hands on the very helpful and interesting printed brochure from which the above two images were taken. 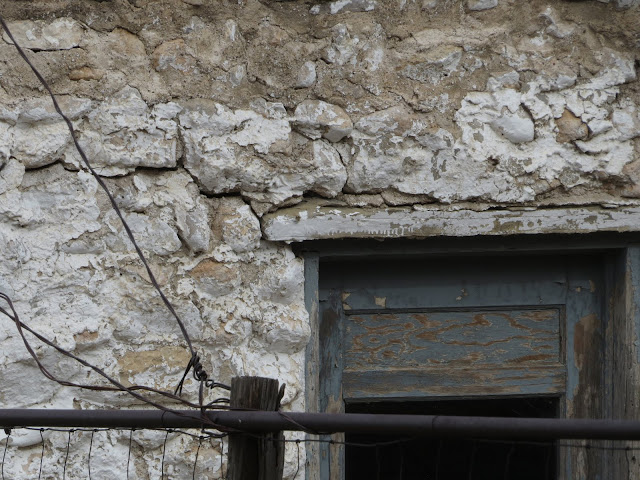 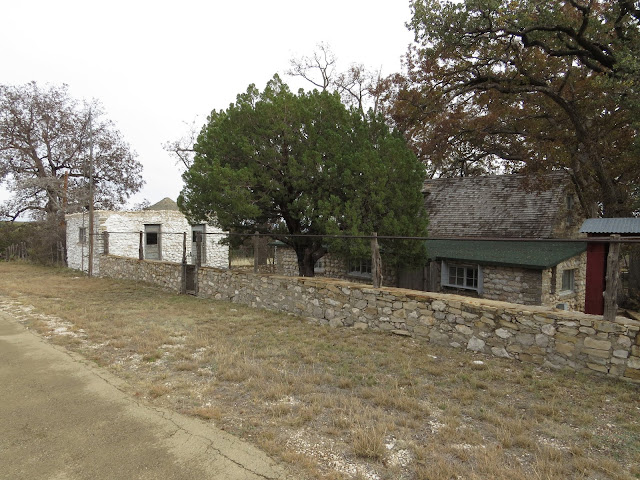 built in 1876 by a couple of brothers that never did file on the land and soon moved on into the obscurity of history.

In the very early 1900s the Smith family filed on the land, expanded the house, including the stone-walled kitchen there on the back under the green shed-roof, 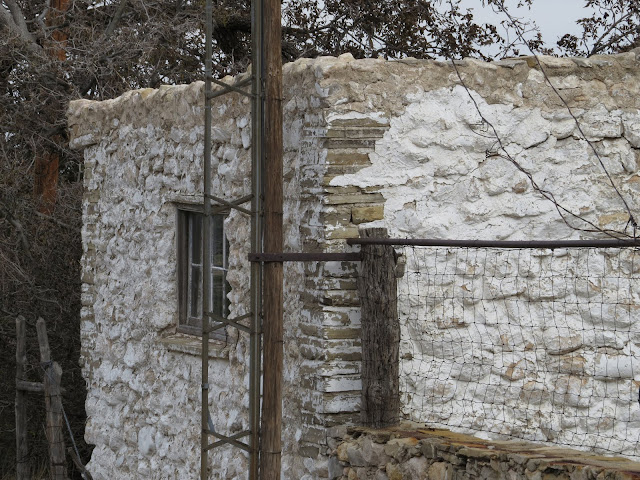 added the separate bunkhouse, (the white building in the previous photo) and 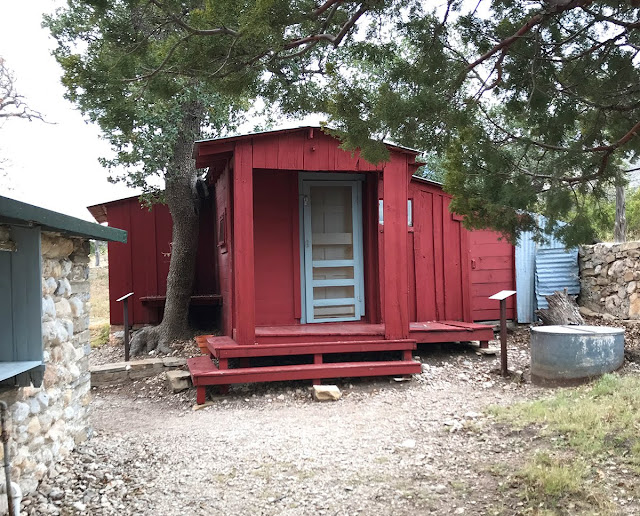 built the red schoolhouse just a few steps from the back corner of the house. 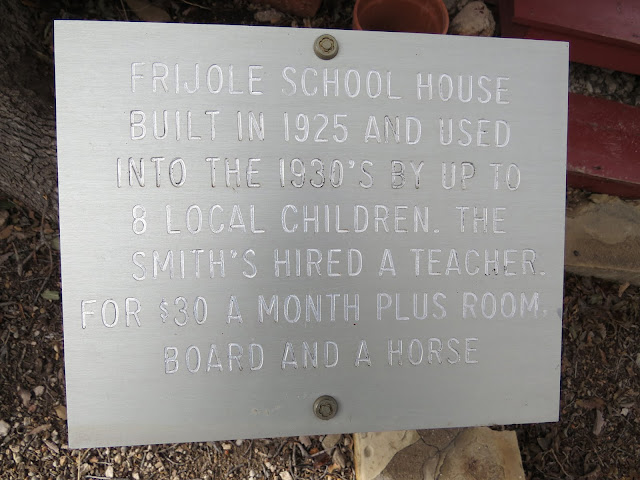 Smith was a bit of an inventor and engineer and set up a carbide generator (a larger version of what the old miners used on their helmets) to provide acetylene-gas to lamps in the house, built a ram-pump to pump water into a raised tank which provided running water in the house, 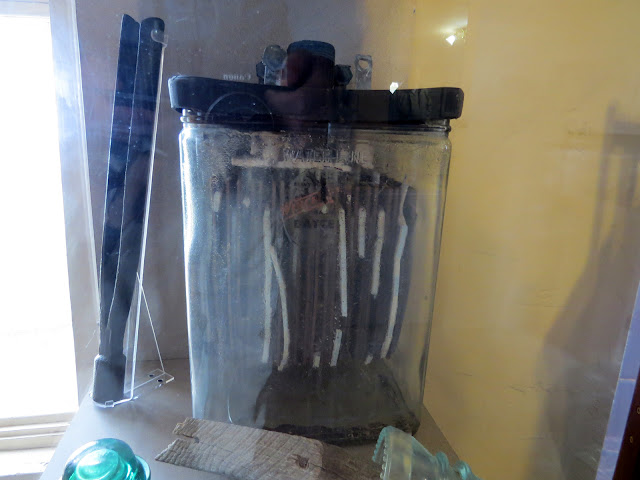 and used a wind-generator set up near the corner of the bunkhouse to charge this glass-jar battery which powered a radio. 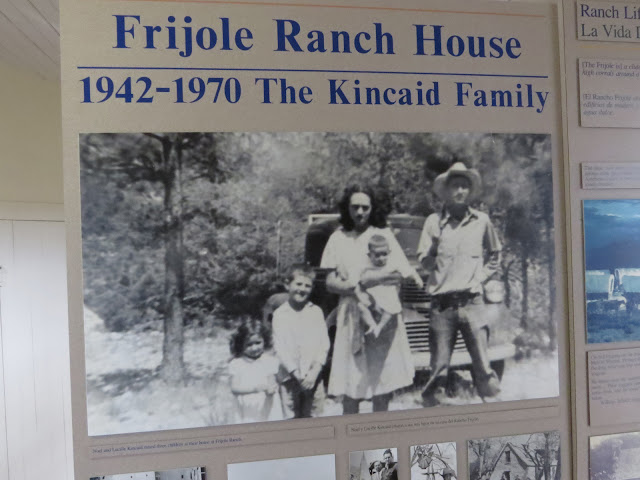 Eventually the Smiths sold up and moved on. In 1942 Noel Kincaid, born and raised in what is now the Dog Canyon area of the NP, became the ranch foreman and moved in with his family and stayed there until 1970.

I have to admit, I'm a little jealous when looking at this photo.

While I was being raised on the edge of suburbia with two siblings, these three kids were growing up on the edge of the wilderness. . . How cool would that have been! (Guffaw all you want. I still think, even at my age when I should be happily embracing the modern comforts, that outhouses and composting are a far superior way to deal with our waste than flush toilets, that heating domestic water on a stove is perfectly acceptable, and carefully managing off-grid electrical power ensures resource-mindfulness which generates good karma.)

I'm fortunate to have stumbled across the ranch when it is open.

The displays and information inside the house are very interesting, but eventually the number of people trying to occupy this small space (Remember, this house was built long before we developed this insatiable need for bedrooms large enough to hold square dances in and living-rooms the size of bowling alleys.) drives me back out the door.

But never mind, it's probably time to head back to the campground, which is still about 4 miles away, anyway 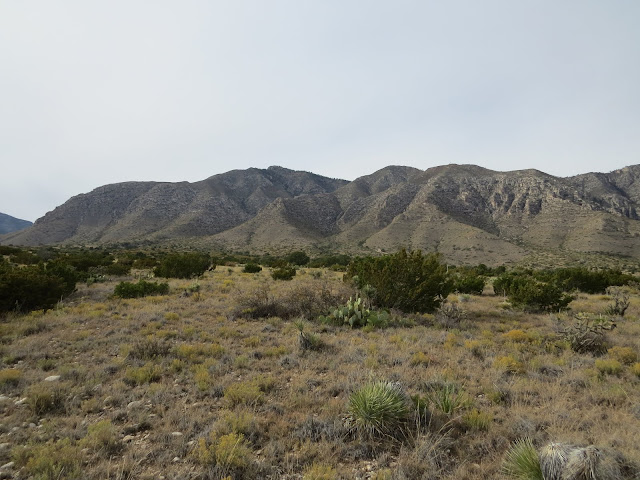 I have the choice to return via the Frijole Trail, back-tracking the way I came this morning, or dropping further south and returning via the Foothills Trail.

I choose the Foothills Trail but frankly it is far less interesting down here on the flats than up against the base of the mountains on the Frijole Trail. It was like walking through a pasture, a rough and cactiky pasture, but a pasture. Nice, but that terrain up there on the other trail is even nicer. 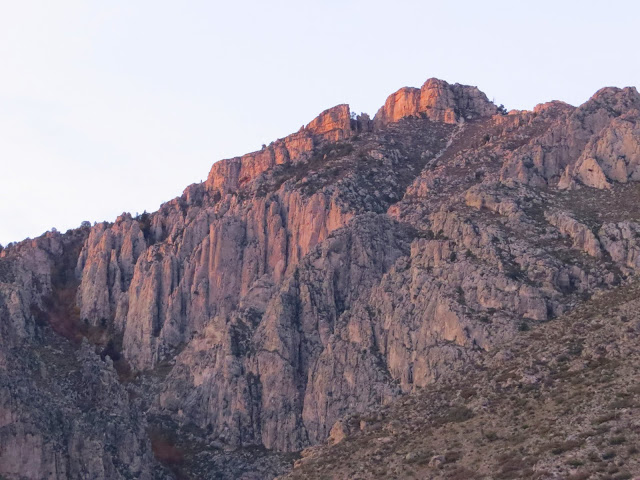 By the time I get back to The Van the sun is sinking and for the first time since I got here I have a clear view of Hunter's Peak looming colorfully up there above the campground. (This is the view out The Van's side door.) 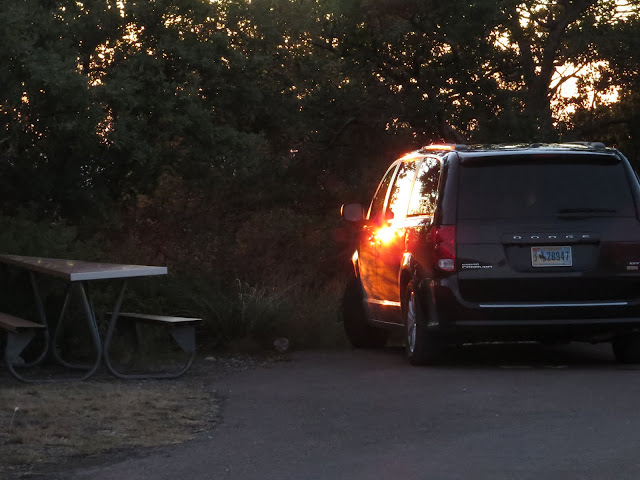 That's all for me today as the sun sinks with a promise of clear weather to come.