After yesterday's ambitious hike on the West Trail, 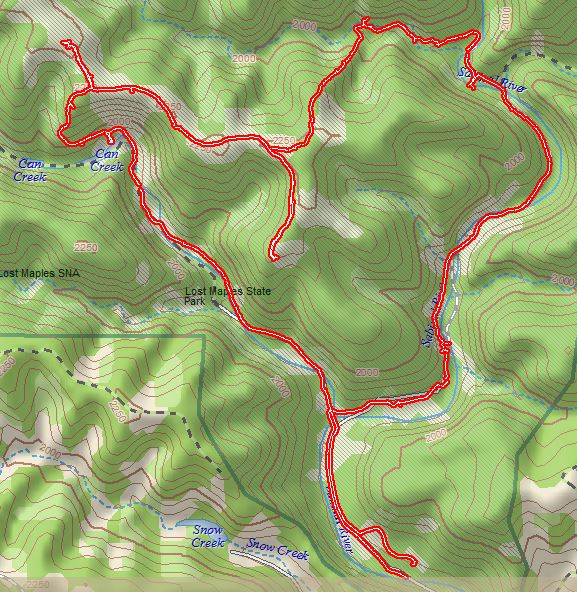 this morning I set out, with surprisingly few aches and pains, with the nearly as ambitious intent of doing the East Trail.

Smart? Not sure about that. 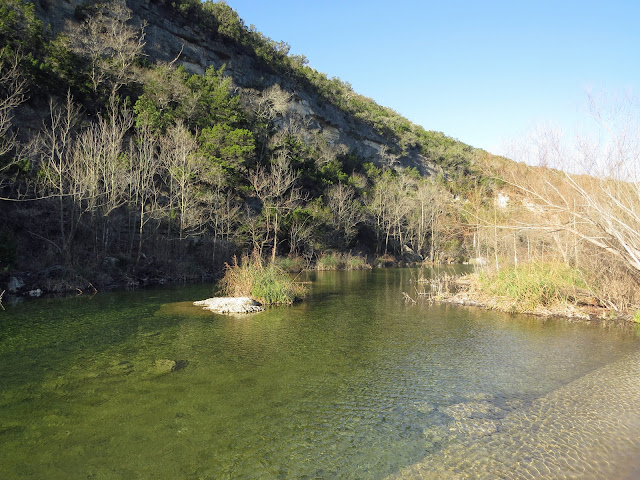 and when I hit the river after coming down a few steps through the trees from my campsite it was clear that yesterdays cloudy-grey had been replaced by more upbeat lighting. 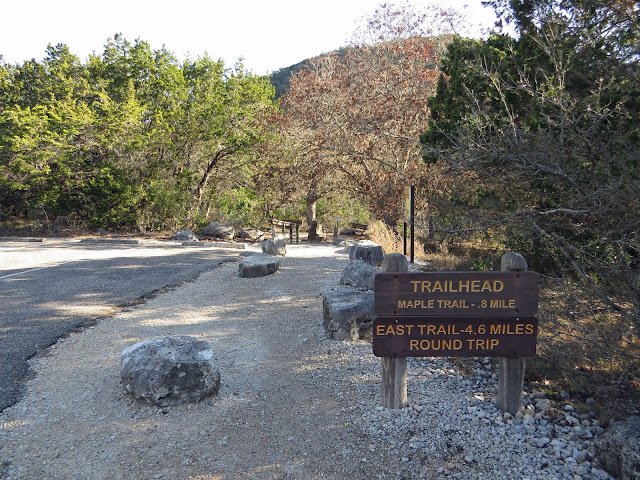 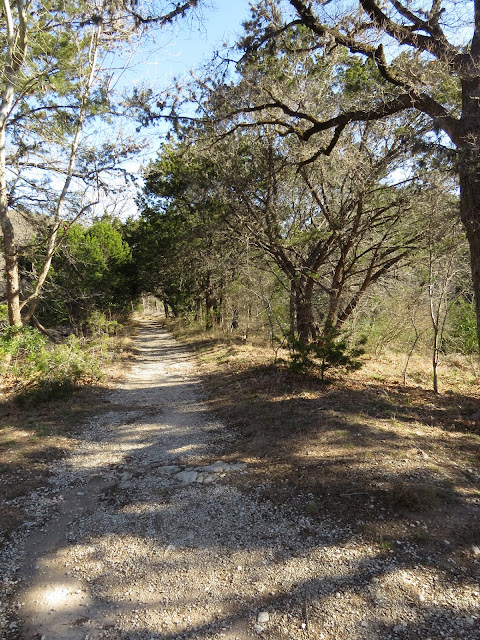 and was raring to go. 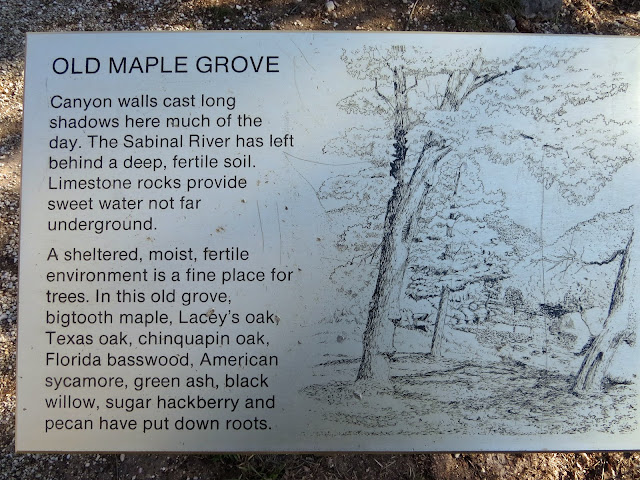 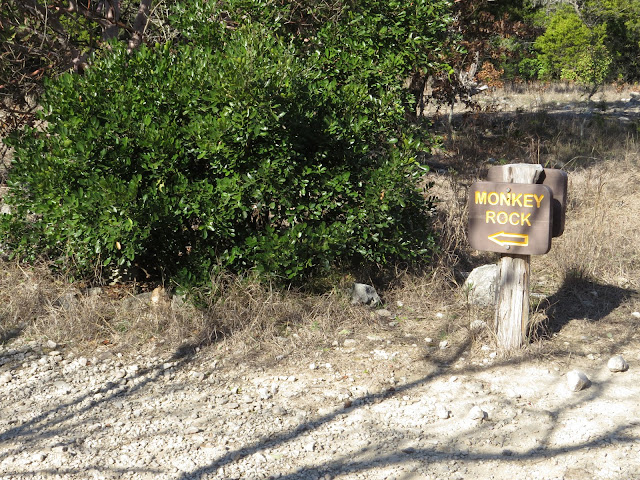 But first an obligatory stop 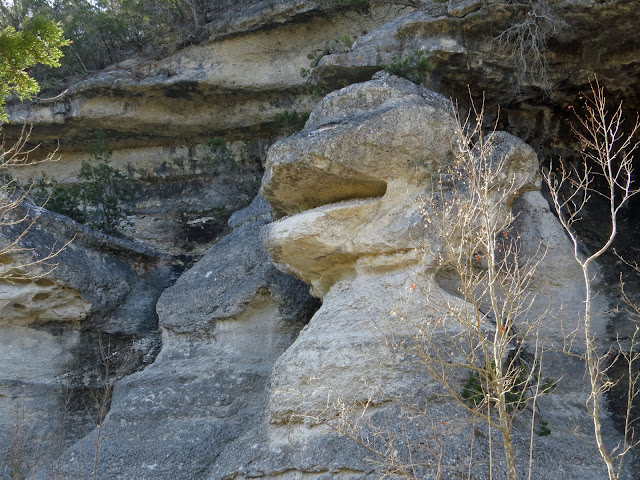 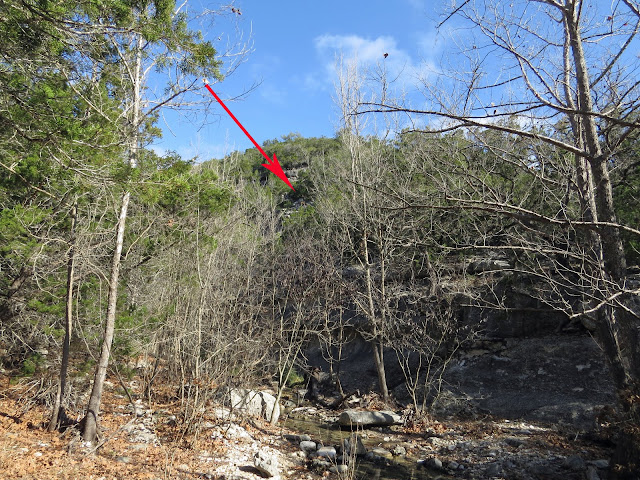 Not long after reaching the site of Primitive Camp A, about a mile from the trailhead, the trail crosses back and forth over a tributary of the Sabinal river three times in quick succession.

While I was lollygagging slowly along between the first and second crossings I noticed some movement far up on the cliffs above me.

Can you see it up there? 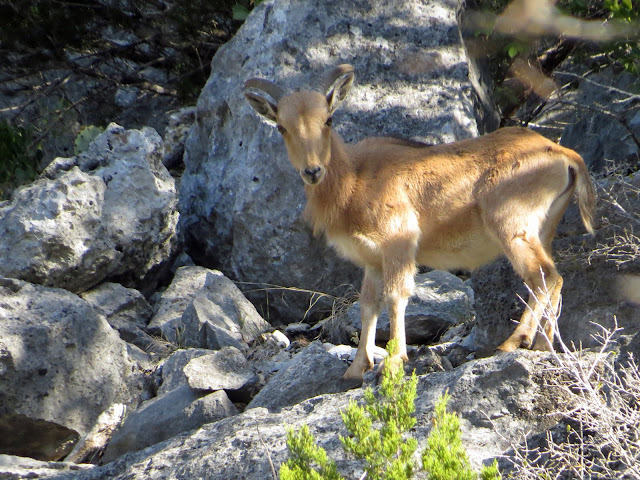 That's a Barbary Sheep, otherwise known here in Texas as an Aoudad. (Yep, pronounced Aw! Dad!!)
Looks cute eh?
Well that dude, or dudet, is anywhere from 100 to 300 pounds, depending on whether it's a  dudet or dude, with a head harder than mine (And The Wife will tell you how hard that is!) and isn't afraid to use it!

Introduced from North Africa because they are tough enough to survive in this habitat, they are particularly adept at rock-hopping and are pretty dang shy so seeing one, or two in my case, was a real gift. 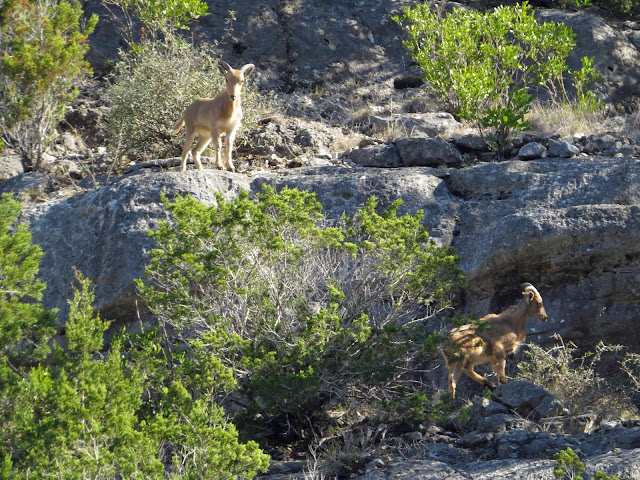 There were two of them up there, that I could see anyway, and when they realized I was looking they got a bit hinky despite being a long ways away, and decided to clear out.

In the process, unlike his companion on the high ledge, the one on the low ledge has just failed to make the leap up and is shaking off the stars before successfully making it on the second try, then, after a little, slightly frantic, milling around, they both disappeared from sight. 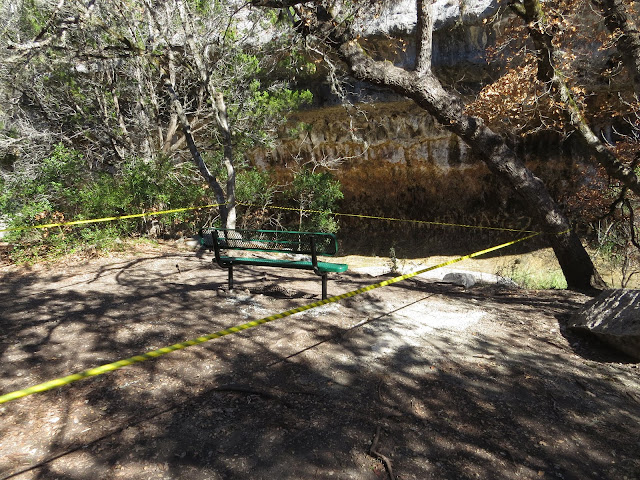 A little while later, just before the trail starts the steep climb up to the ridge above, is a popular spot called the Grotto. For those interested in more civilized activities, using this as a turn-around point makes for a nice out-and-back stroll,

Today the bench had just recently been reset into concrete but I'm sure it's cured by now and the tape removed. 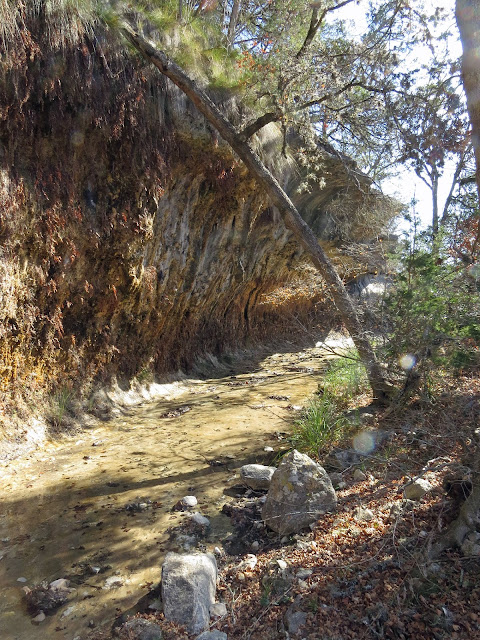 Here the creek has undercut the limestone cliff on the other side and water seeping down through the rock is, in addition to supporting a thriving Maiden-hair Fern colony, leaching out the carbonate and depositing it at the base of the cliff as Travertine, though at this location where the process is due to ambiant temperature water instead of heated water, it is more properly called Tufta. Both are a very soft form of limestone that will eventually, the key word being eventually, harden enough to form a lightweight, porous rock.

In the meantime a single foot-step into fresh Travertine or Tufta can destroy hundreds of years of a natural process. 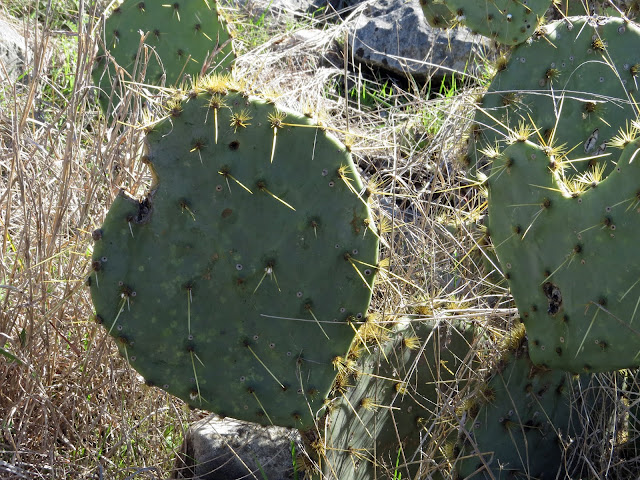 Up on top of the ridge, chewed on prickly pear with their needles shining in the sun 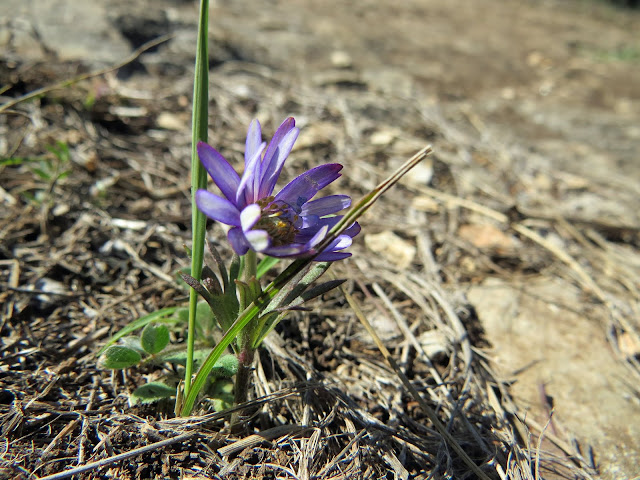 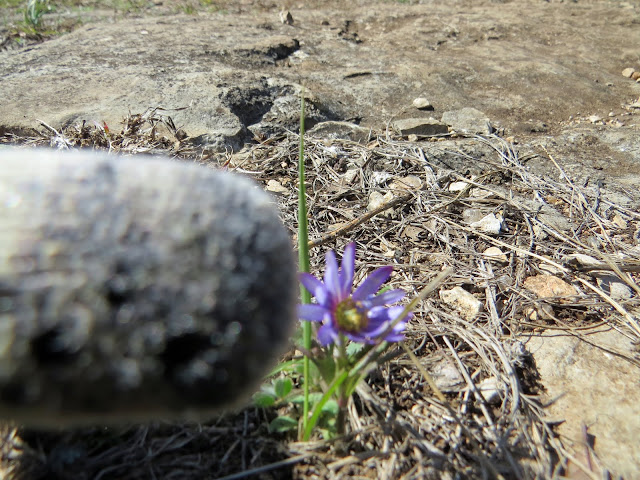 OK, not a great shot but that weird thing poking in from the left to give scale to the photo is my gloved fingertip. (Did I mention that, though sunny, it's a nippy day?) 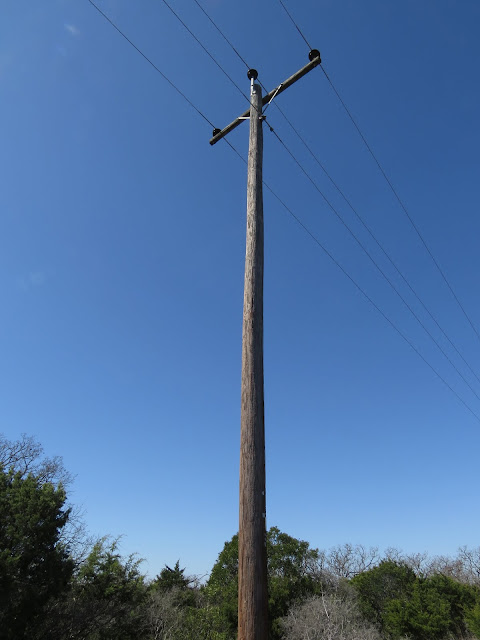 Also running down the spine of this ridge is a Bandera Coop high-voltage electric transmission line. 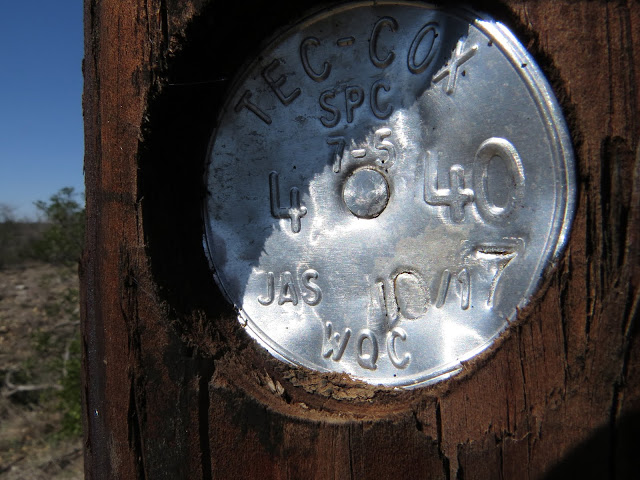 They were clearly up here three years ago replacing some of the poles, 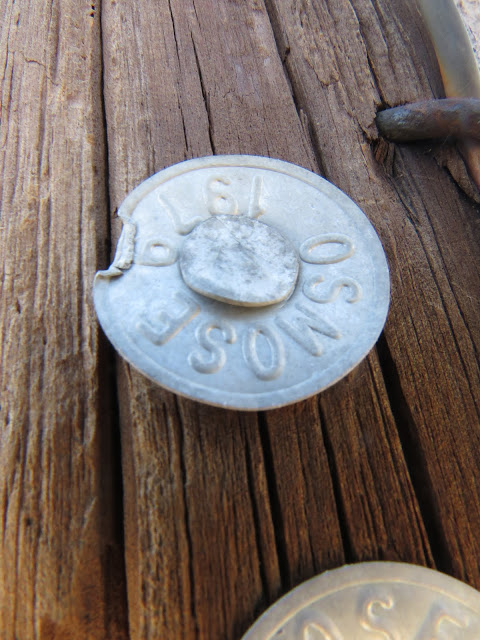 but others have been here since at least 1979. 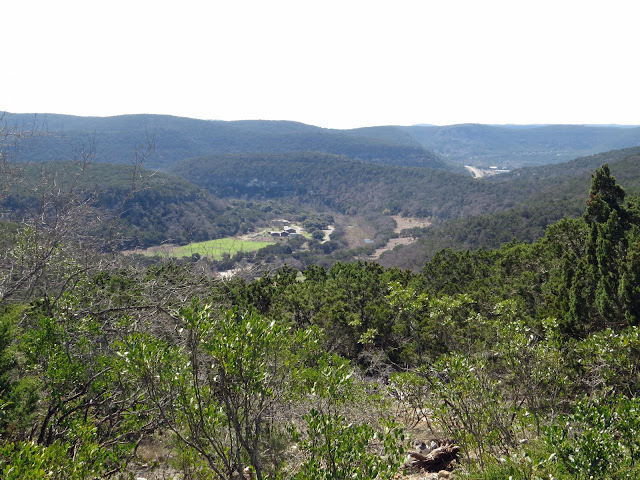 A side excursion along a diverging finger of the ridge resulted in this shot of the park's maintenance facility down in the valley.

Eventually I'll need to hike on past those buildings to get back to the campsite which is further down the river around that bend, 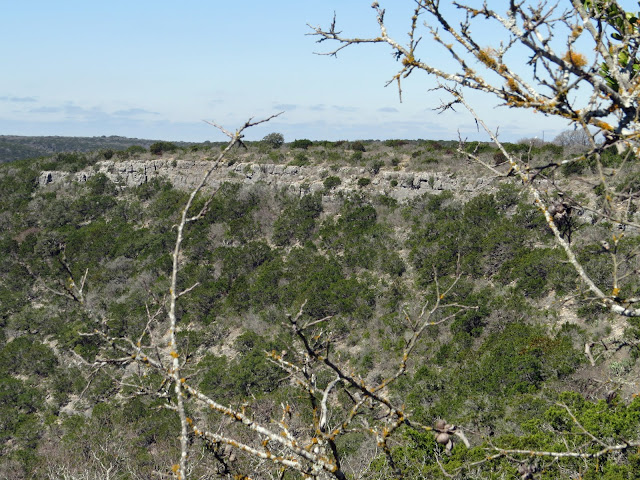 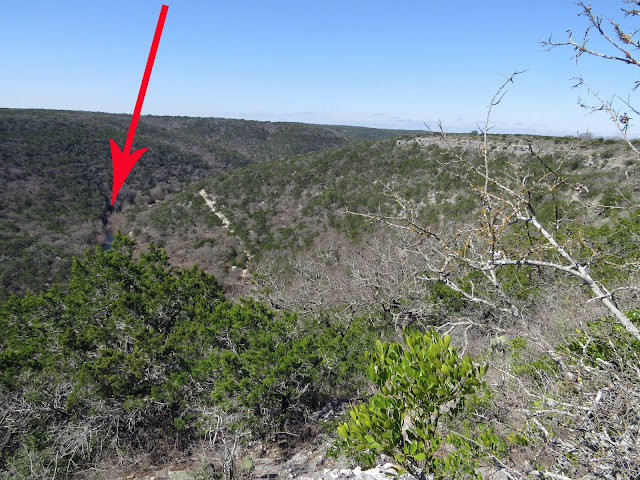 so I can descend along that diagonal slash in the center-left to eventually get back down to the ponds, which you might be able to just see there under the arrow, which I passed by on yesterday's hike. 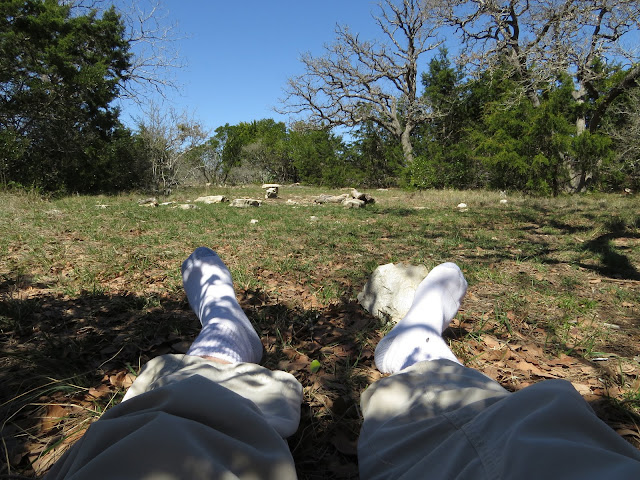 but first - again - there's yet another side excursion, this time to Primitive Camp B which I have all to myself and where I kick back for a late lunch 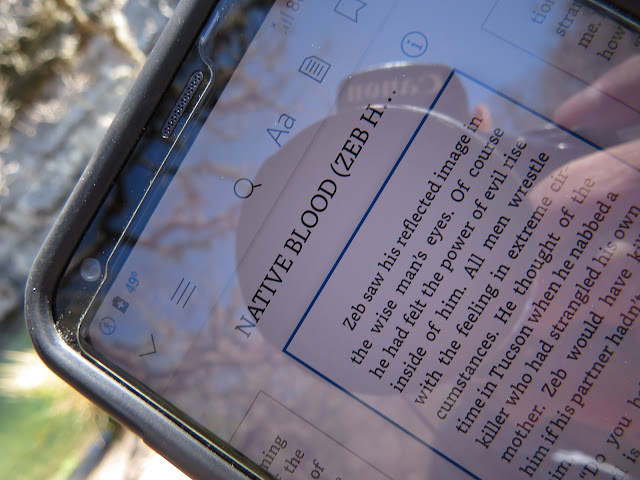 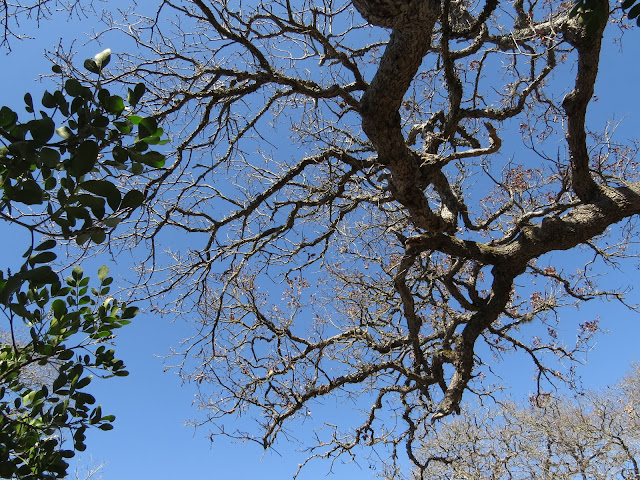 Though the overhead view frequently distracted me from my book. . .
But eventually it was time to move on. 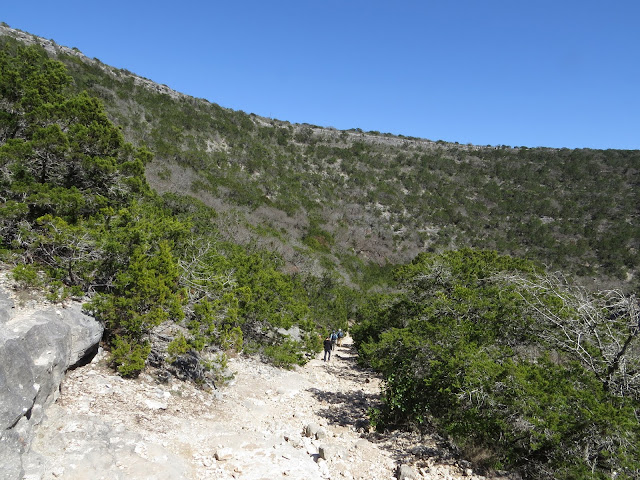 When the four people down there on this section of trail which is that diagonal slash from a few photos ago, an older couple with a younger couple on their heels, and I mean right on their heels, went by me (They passed me up because of my naturally slow pace, not because I was worn out and making frequent stops to rest.  Honest!!) I assumed they were all together. But once at the bottom they split up and went different ways so I figured out that they weren't really together-together, they just hiked that way. 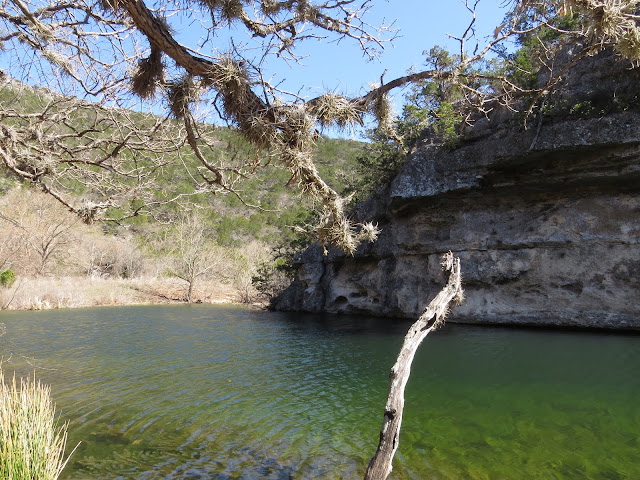 The reward at the bottom of the decent 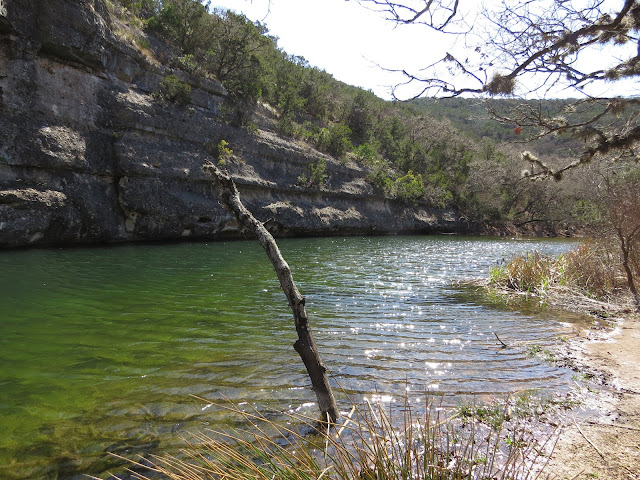 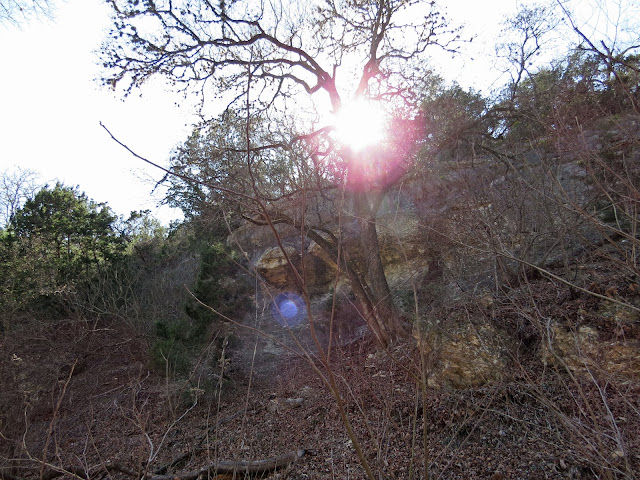 From there it was another mile and three-quarters back to The Van patiently waiting at the campsite as the sun began making it's inevitable drop to the western horizon, a sure sign that dinner-time was coming up, and we already know I don't want to miss that! 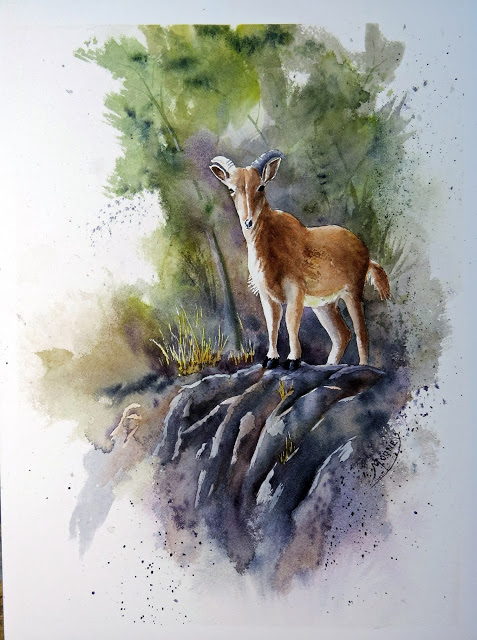