Now there's a word, a manly word if you will, a macho word if you won't, that came by two separate and disparate definitions honestly. But since I'm not into suddenly springing out and attacking people, (I guess my dangly man-parts aren't quite big enough for that sort of activity.) I must be talking about the more legal definition of traveling off trail in wild and/or uncultivated country. At least it's legal here in Pedernales Falls State Park where the tough, prickly land can stand up to a few errant lug-soled boots.

Don't get me wrong, the 5000+ acre park has plenty of decent, if sometimes over-groomed, 'official' trails to keep a person busy for a while, but that's not always enough, at least not for me, (Uh-oh, I'm sure that says something about me that I don't really want to know!) and this last trip seemed to have been more about bushwacking than trail strolling.

Maybe it has something to do with the fact that as I wrap up my third year of retirement I'm even more aware than ever that I haven't figured out what I'm going to be when I grow up and perhaps it's time to walk a few different paths and see what I stumble across. Not that I expect I'm going to find the definitive answer for retirement living by randomly hanging a left off the trail and plunging into the brush, but it's an analogy I can relate to. Besides, it's fun!

Sidebar: A pretty cool game is to pick a 3 to 5 digit number off a random license plate, walk that many paces along a trail, stop, flip a coin, rock, leaf, whatever's handy, to pick which direction to turn, right or left, and head out to see what you find. Well, it's cool to me anyway, gets me to places I wouldn't otherwise be inclined to deliberately seek out. . . (My natural pace is about 4 1/2 ft. from left toe to left toe, close enough to 730 paces to the kilometer or 1175 to the mile, so I convert the number of paces, roughly I admit, into kilometers or miles and tenths which I can keep track of on the GPS without having to actually count.)

And who knows? Maybe there is an answer of some sort to my grown up years out there in the next clearing or on the other side of that next cedar thicket or over that ridge or. . . (Oh, so many places to see and so little time!!!) At the very least there's probably some cool plant or game trail, or view or, as once happened to me, a tiny little, long abandoned cemetery far from any road or trail, marked only by a few rusted scraps of once-fancy wire fencing, a half-dozen depressions in the ground and a few colossal Live Oaks sheltering it in their twisted arms. Bushwacking in the scrub-oak and cedar thickets of the Hill Country can be challenging, like tuck the binoculars, camera, and anything else that's loose, safely into the pack, strap it down tightly, check to make sure all your pocket flaps are fastened, jam your hat on tight, get down on your hands and knees and bull your way along the game trails, kind of challenging. (Is it any wonder I hike alone! What grown person does that sort of thing!!!) 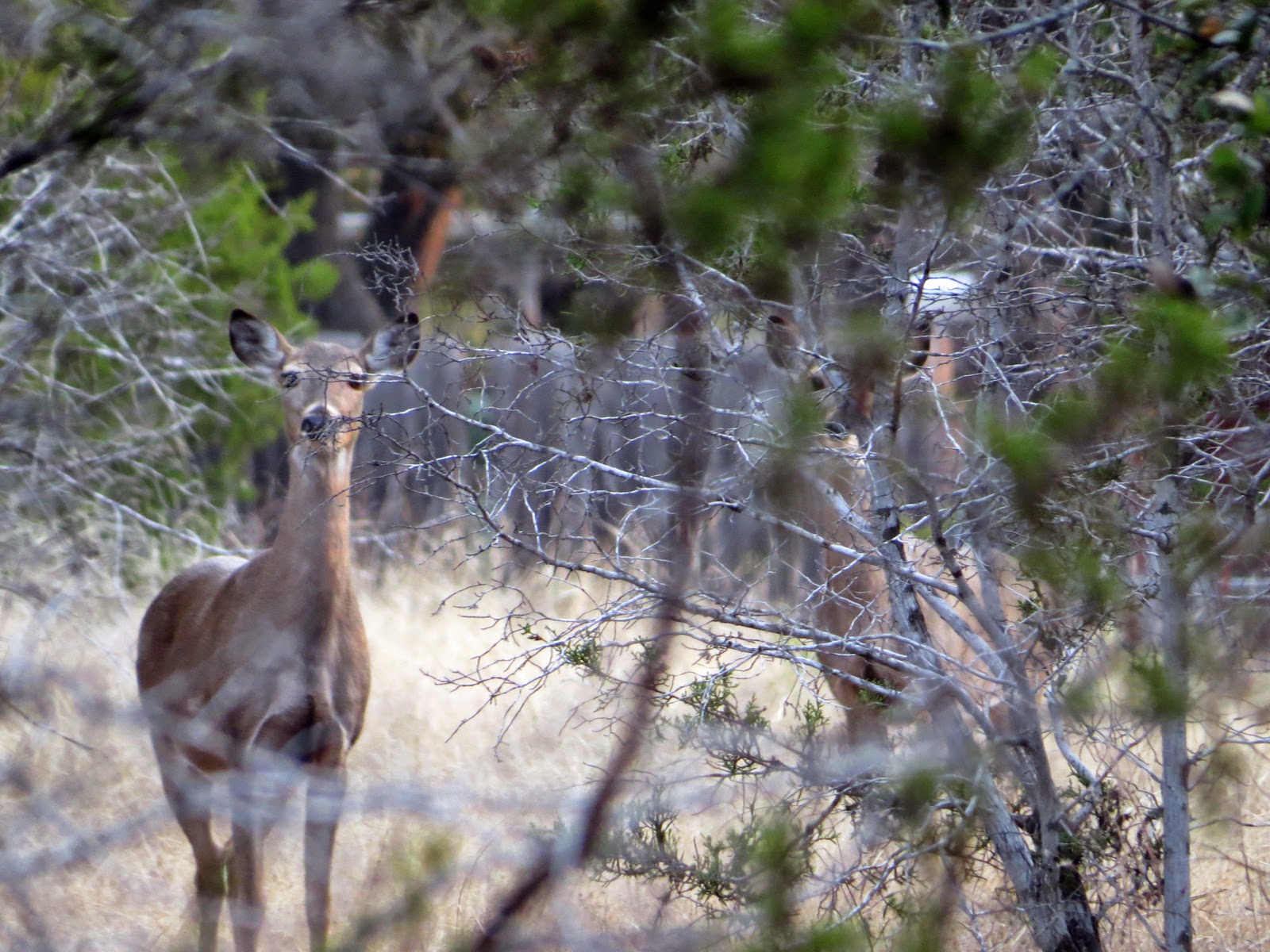 Once in a while I even have to negotiate with the original trail blazers for usage rights. You might have to look close, but there's two of them to negotiate with in this photo. Fortunately they seemed to be in accord with each other and let me pass unmolested.

Later this same day I ran into a skunk, or at least his odoriferous miasma, somewhere near the edge of a particularly thick cedar break. With no prospects behind other than branch-clogged, hands-and-knees backtracking, yet with open meadow in sight ahead, I stood my ground (If a biped can call being down on all fours standing.) and had a quiet but firm discussion with said skunk about why it was in both our best interests to just leave each other alone and go on about our day. It was a one-sided discussion, but after some tense minutes of listening for the distinctive rustling of a foraging skunk and peering around through the dense thicket as best I could, with negative results, (Which, of course, meant I was talking to myself out there like that crazy person other people cross the street to avoid!) I safely scrambled, un-odiforized, the last few feet to the temporary haven of the open ground ahead. 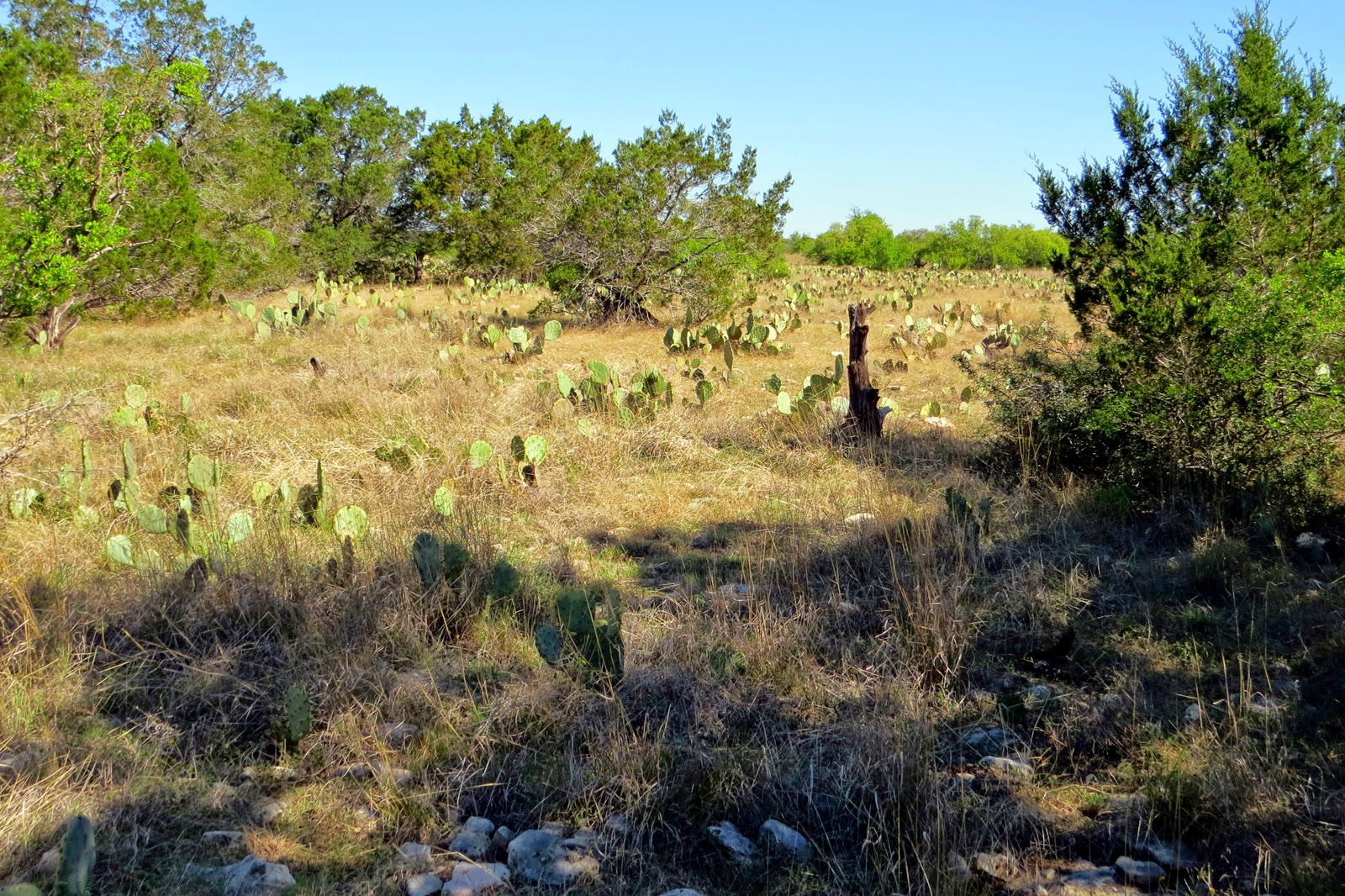 That's right, its not all bulling your way through thickets, but then the clearings and meadows, for all their seemingly open strolling, have their own special brand of challenge with ankle twisting boulders strewn randomly about and prickly pear to dodge and tiny little Lace Cactus, small enough to be hard to see but just tall enough to reach above the protection of your boots and bite the crap out of your ankles with little hair-like needles that can't possibly hurt as much as they do! 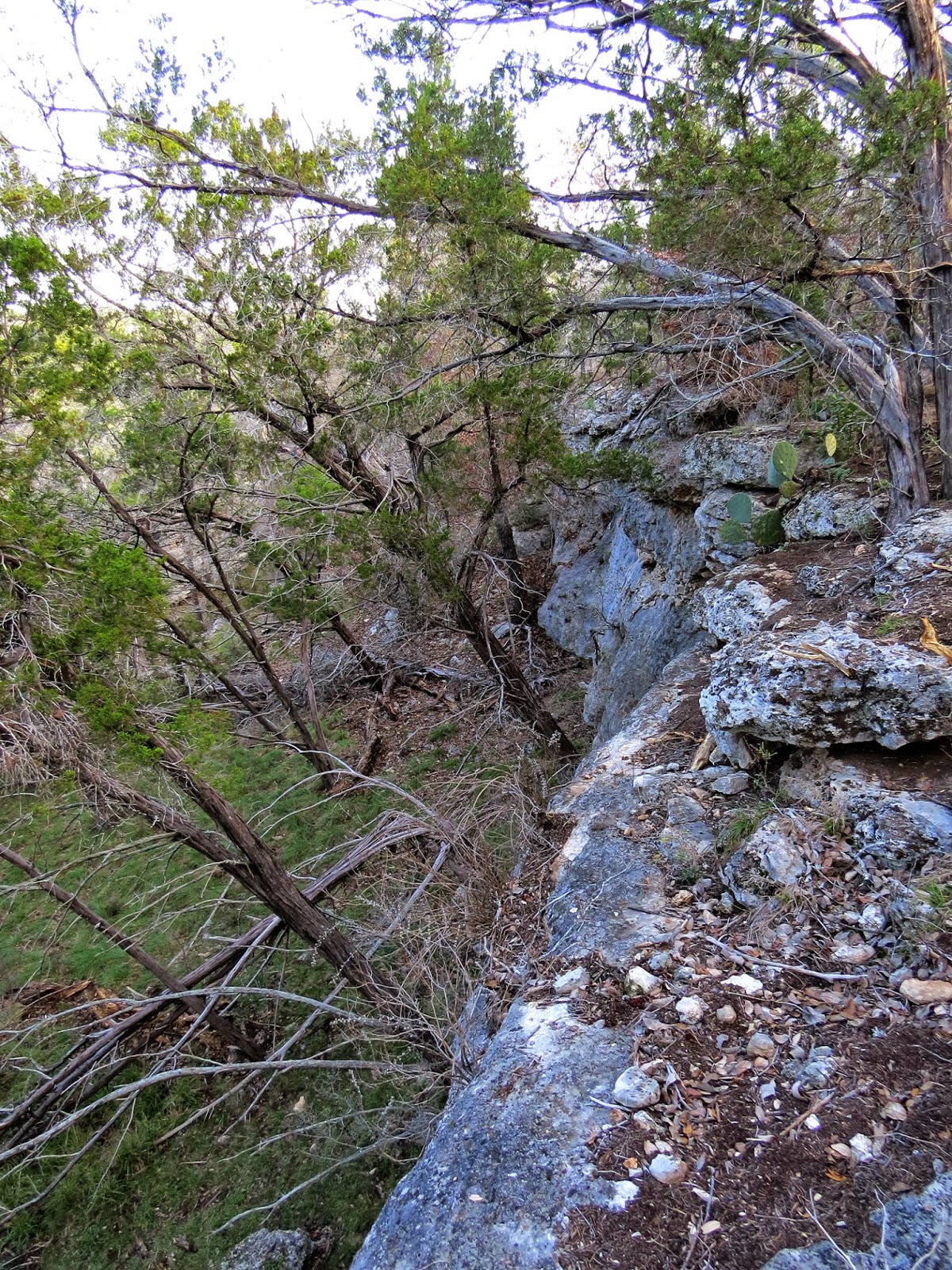 The many bluffs and ledges found here in this limestone country can also be an issue for us wingless creatures not blessed with a cape that allows us to leap tall buildings. 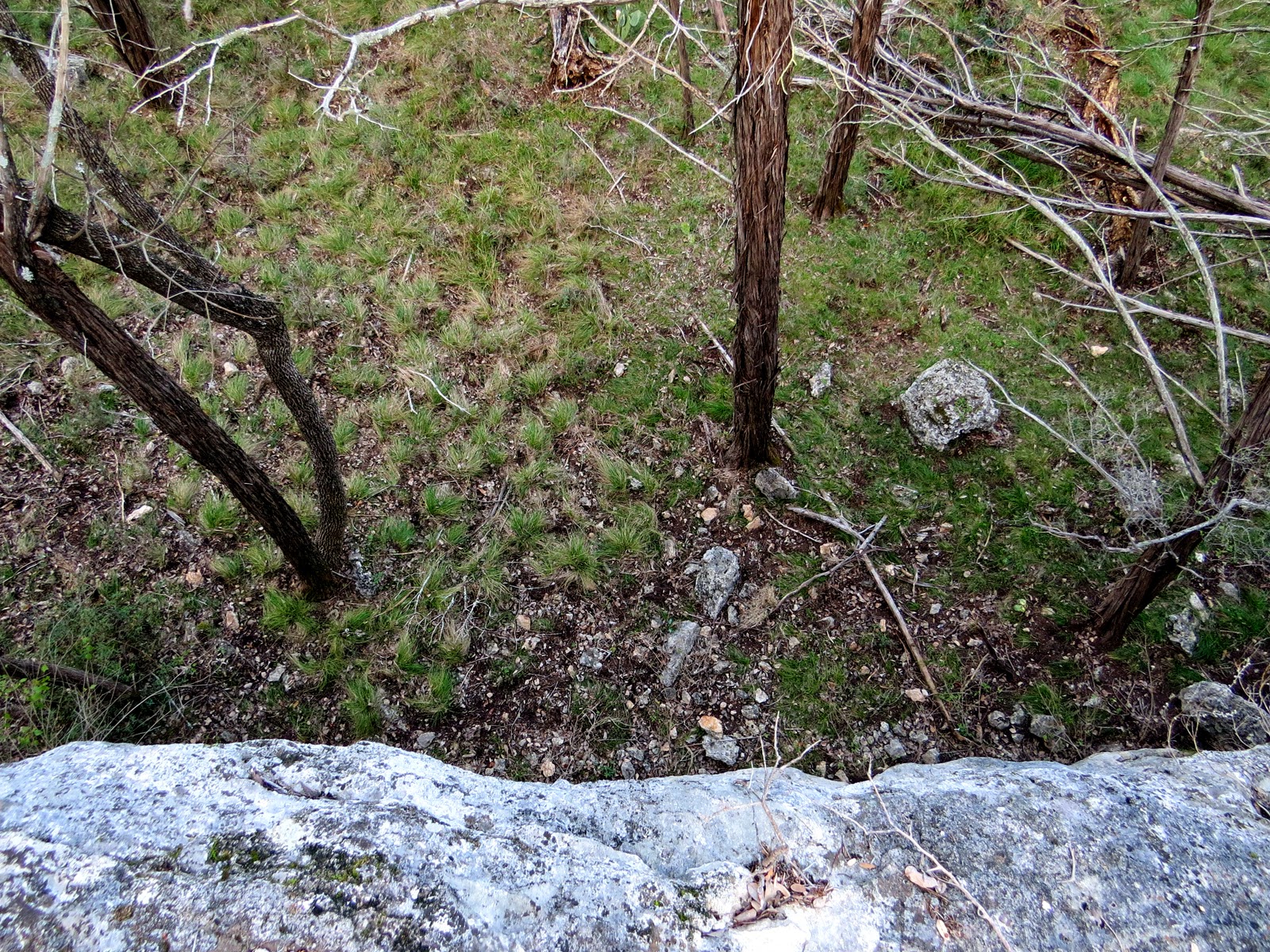 It's not uncommon to find myself standing at the top (Or bottom) of 30 or more feet of shear limestone cliff and having to make the decision whether to scale it or turn around. (I almost always turn around. . . free-climber I'm not!!) 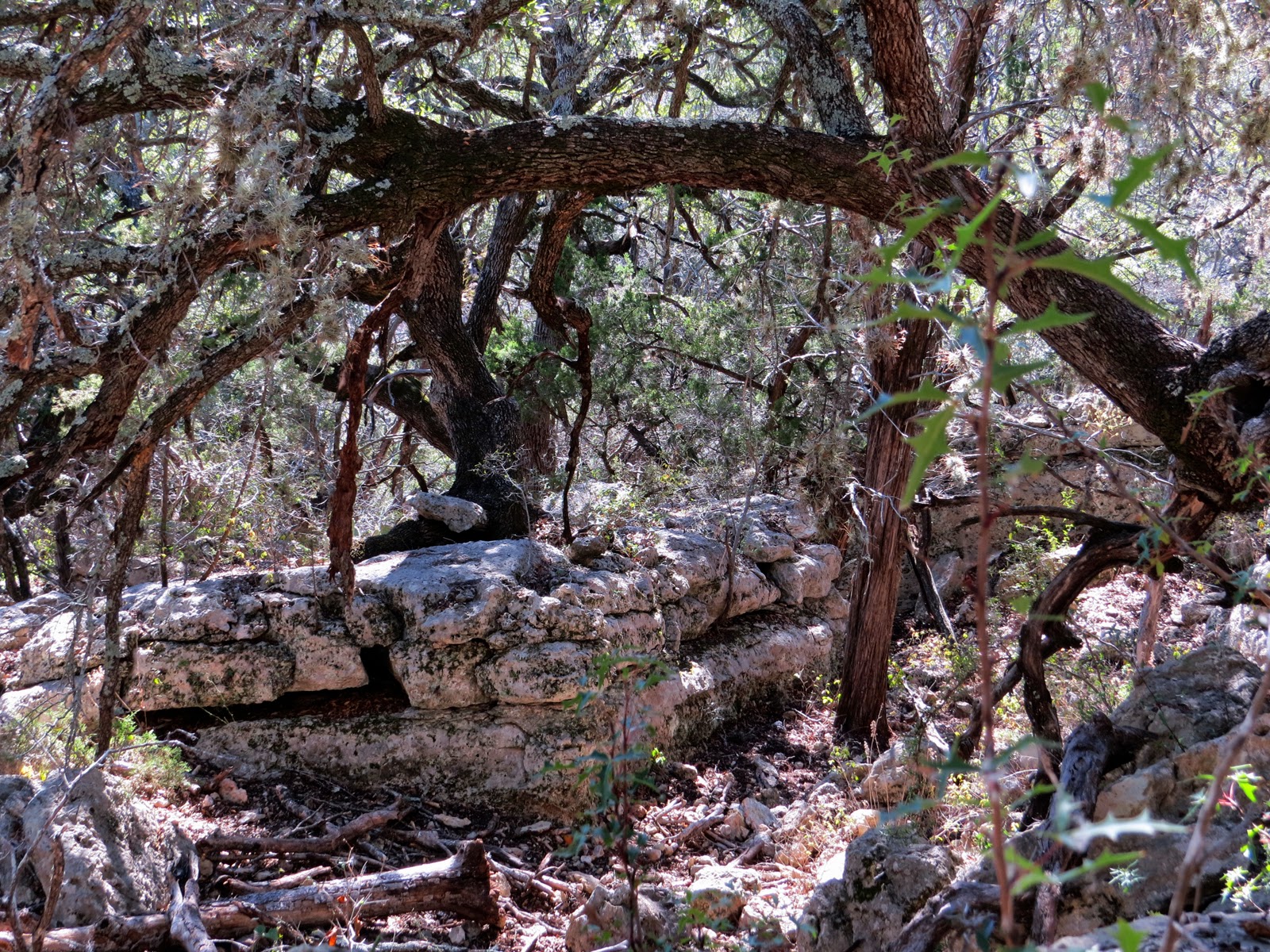 Some of of these bluffs can be quite fractured, as in this case where an entire section has split away and begun to lean out as it starts the inevitable downhill journey. It's not always a fast trip, as evidenced by the good sized cedar growing there to the right of that big ol' oak perched out there on this slice of ledge which has opened up a 20 ft., debris filled crack between where it is now and where it started from many, many years ago.

Just the other side of that oak is a steep slope falling off into a nearly shear 40 ft. drop down towards the river. I know because, unable to resist, I climbed out there to take a peek, testing every foot and handhold twice and doing my best gecko impression as I clung tight with my belly pressed flat to the rock like - well - like a gecko.(OK, OK, I admit my belly hasn't had a very close association with flat for a while now, but you get the idea. . .) 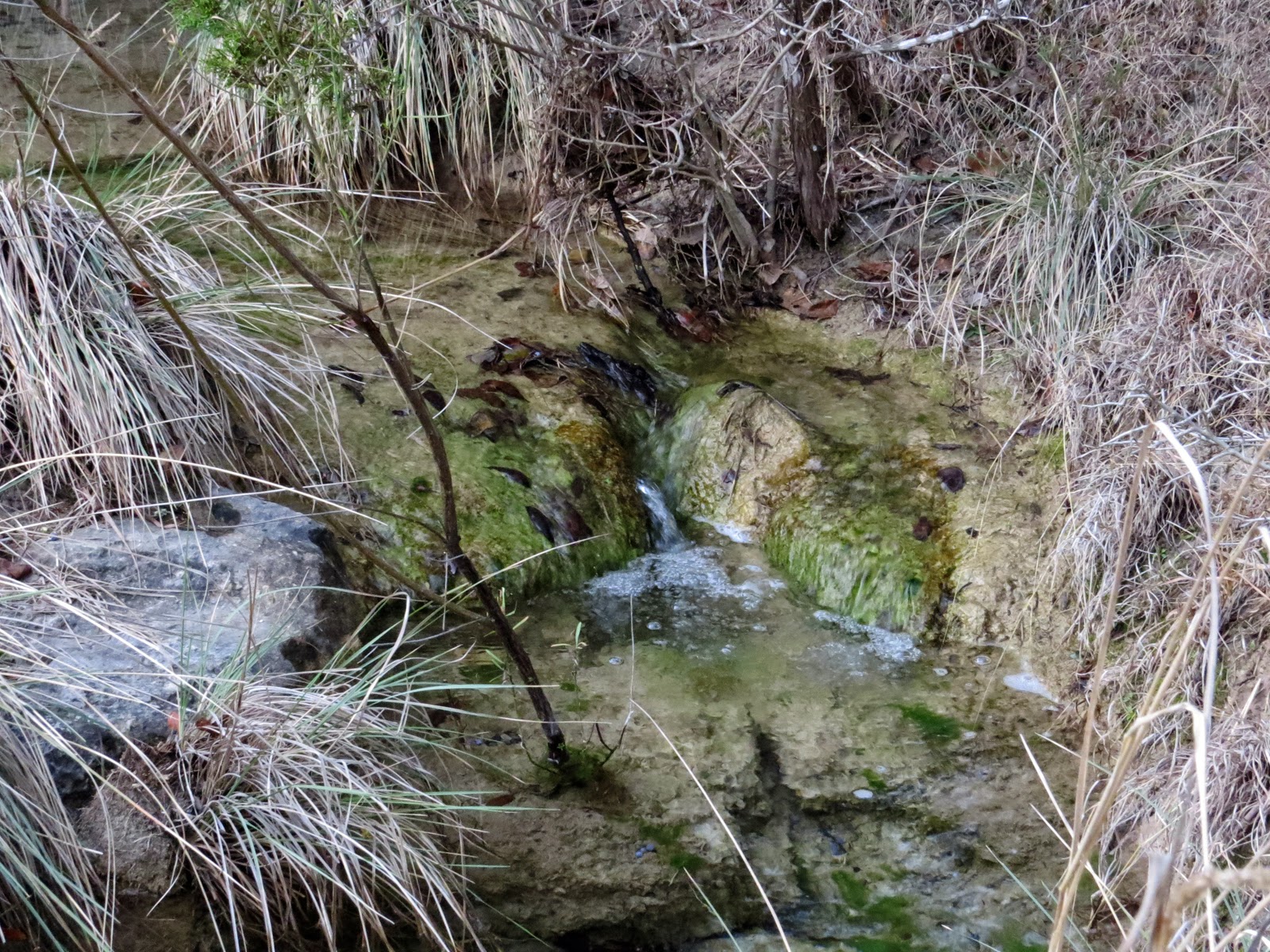 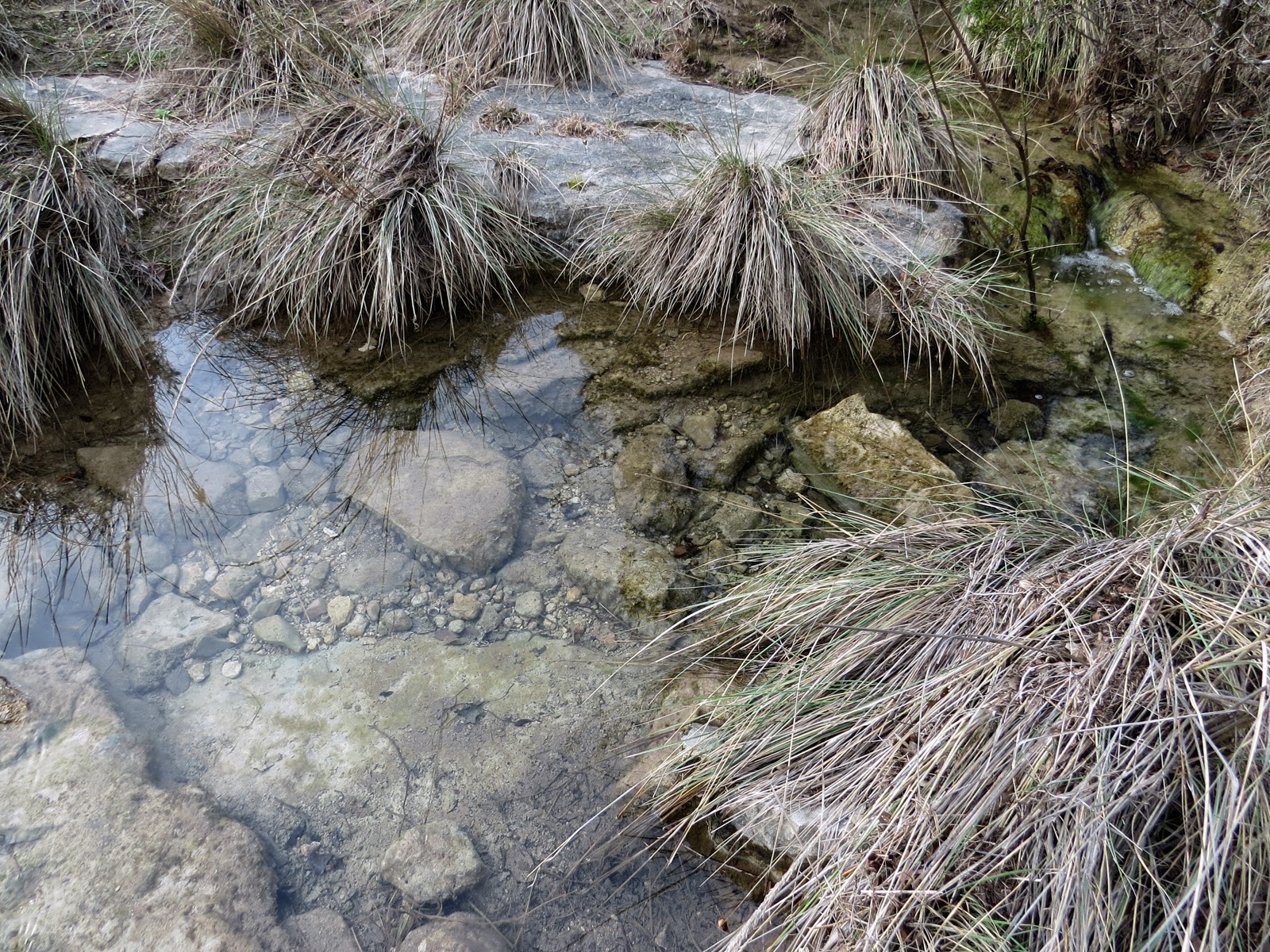 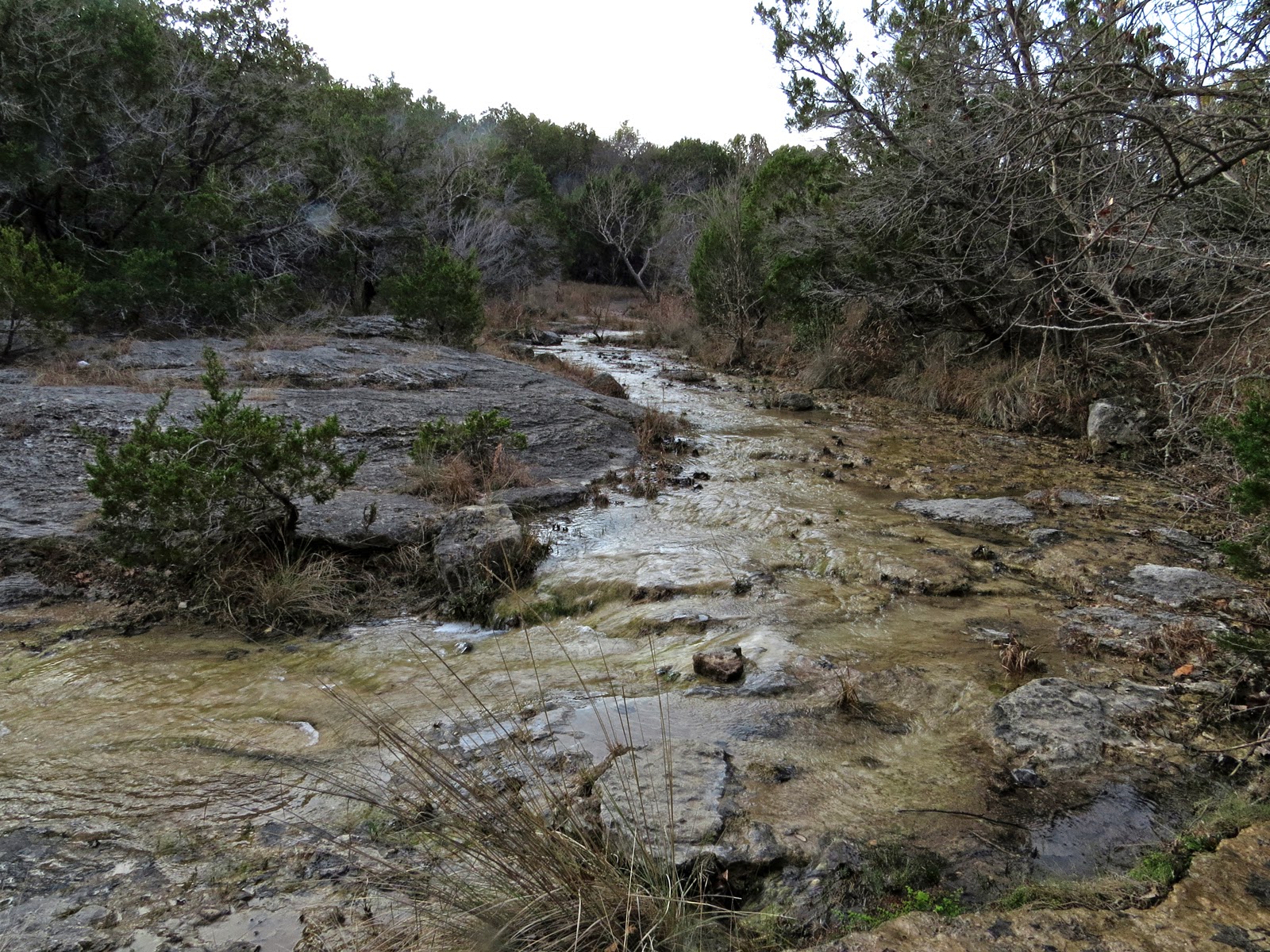 So, in addition to the 8 miles of Pedernales River within the park boundary's there's probably at least twice that of more negotiable secondary streams and waterways running through it, creating another bushwacking option. My hiking boots give me about 6 inches of waterproof stream-wacking and the limestone bottom provides good solid footing, though it can be a little slick in places. 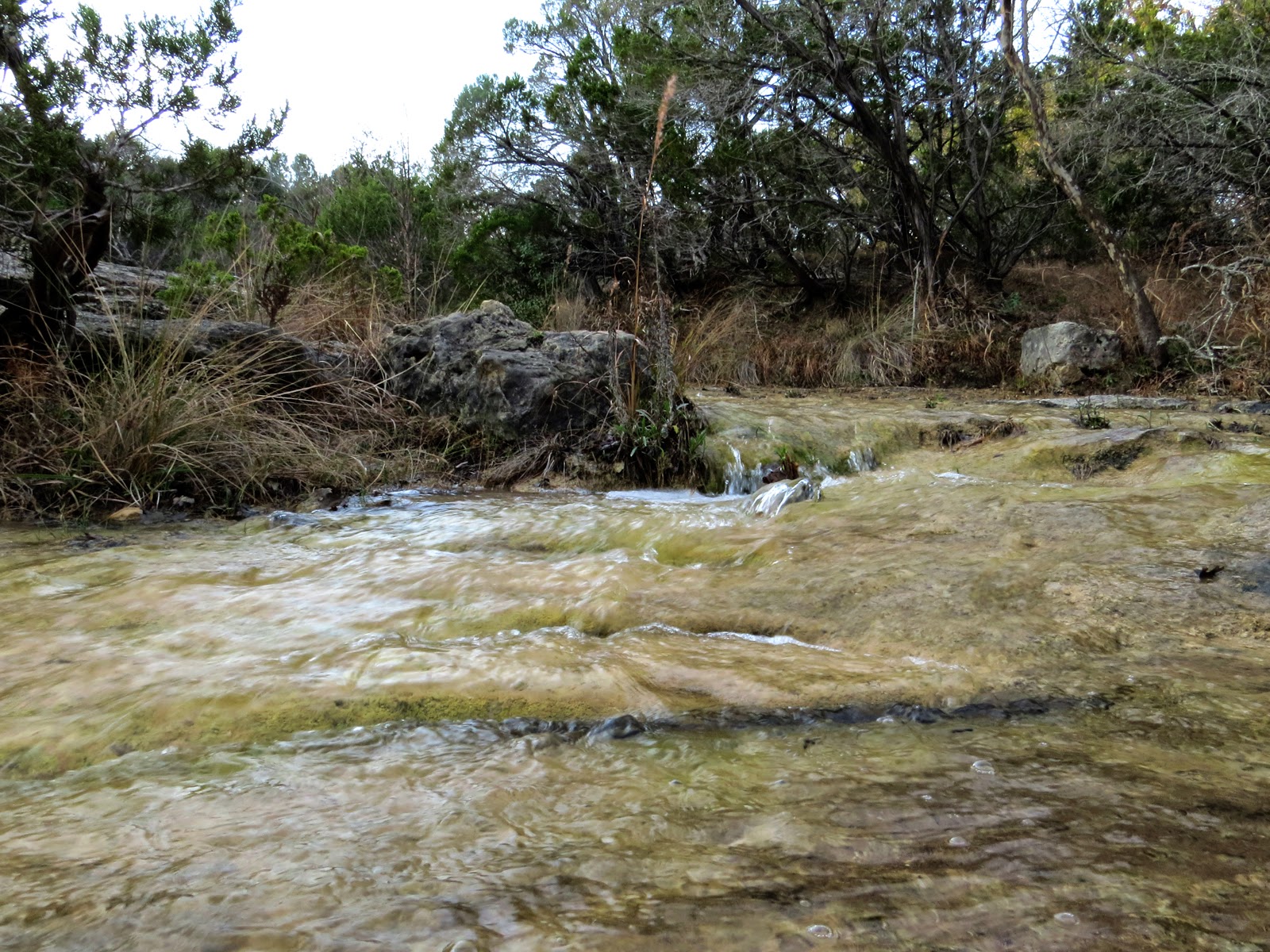 But there's a limit to that too. At some point I'm bound to end up at the bottom of a narrow, vegetation-choked V-shaped ravine choked off by grapevines, fallen rocks and dead trees that's going to stop me unless I'm willing to get down and belly-crawl through the water. (I'm usually not!) Or I'm going to hit a spot like this one with too much water, either in depth or velocity or both, to safely negotiate. But finding the limits is at least half the fun! 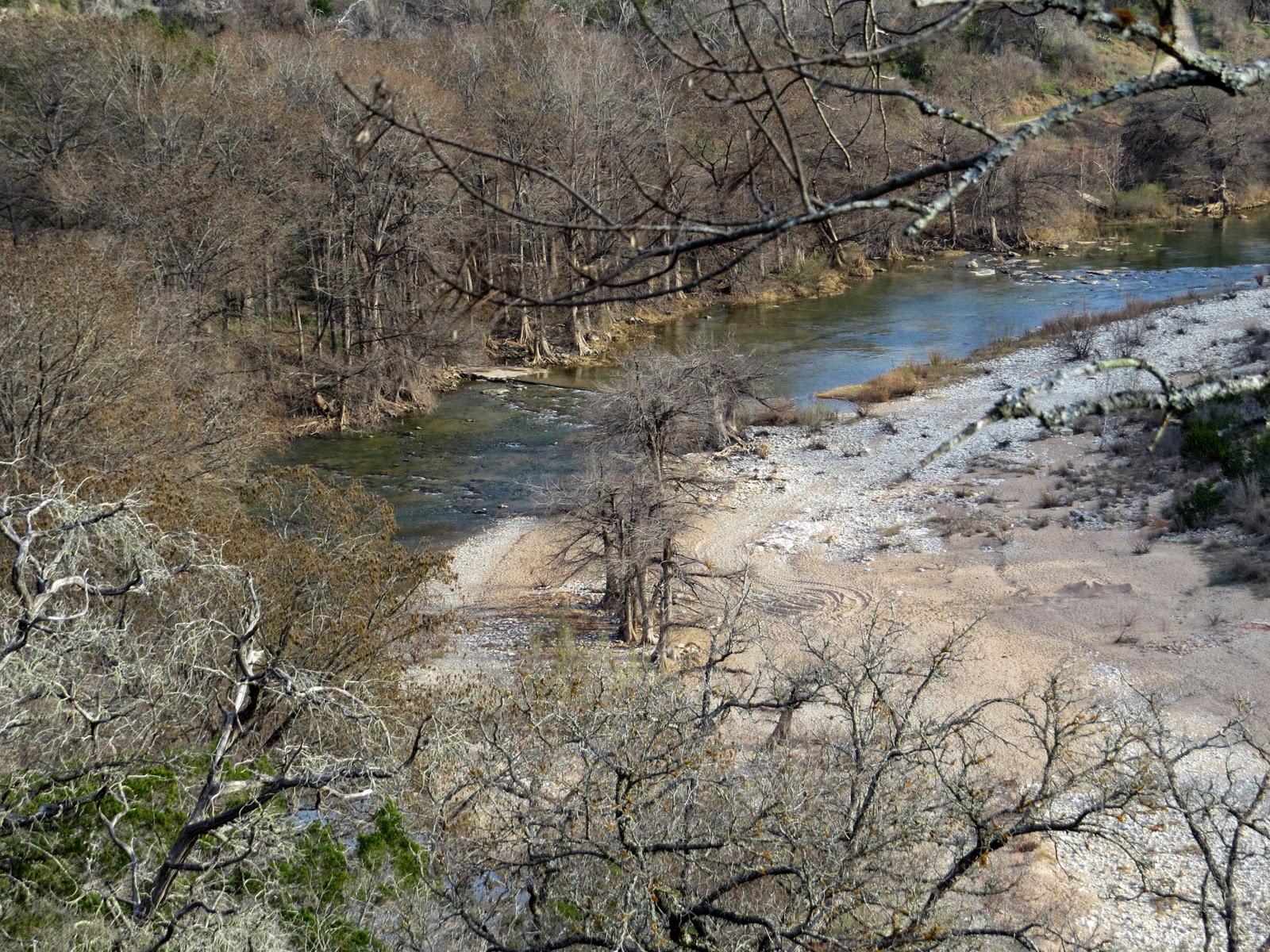 And the rewards are worth the cuts and bruises and sticks in the eye and sweat and backtracking, such as the view from this otherwise unreachable bluff looking down on Trammel Crossing (Visible just above photo center if you know what you're looking at.) 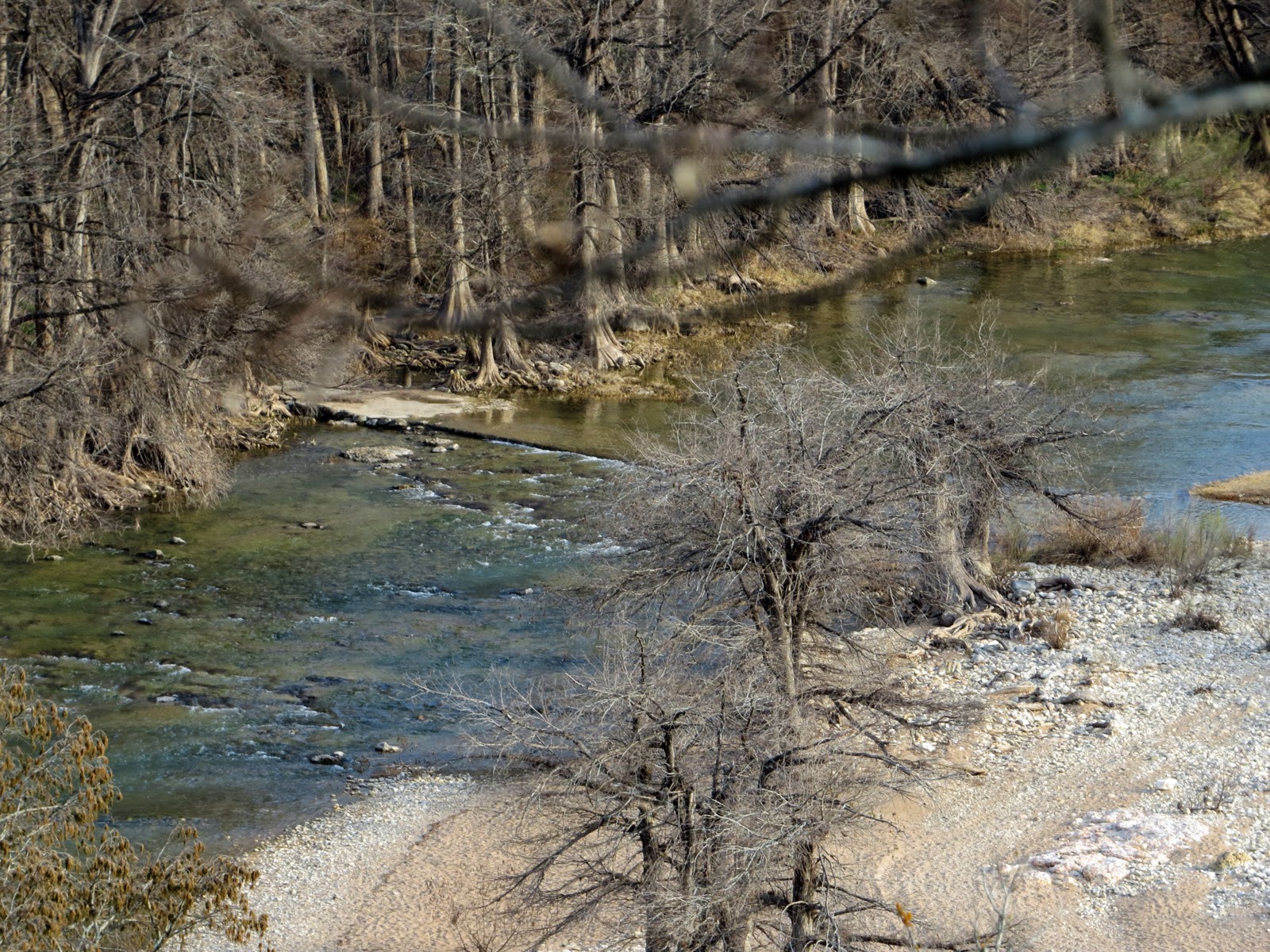 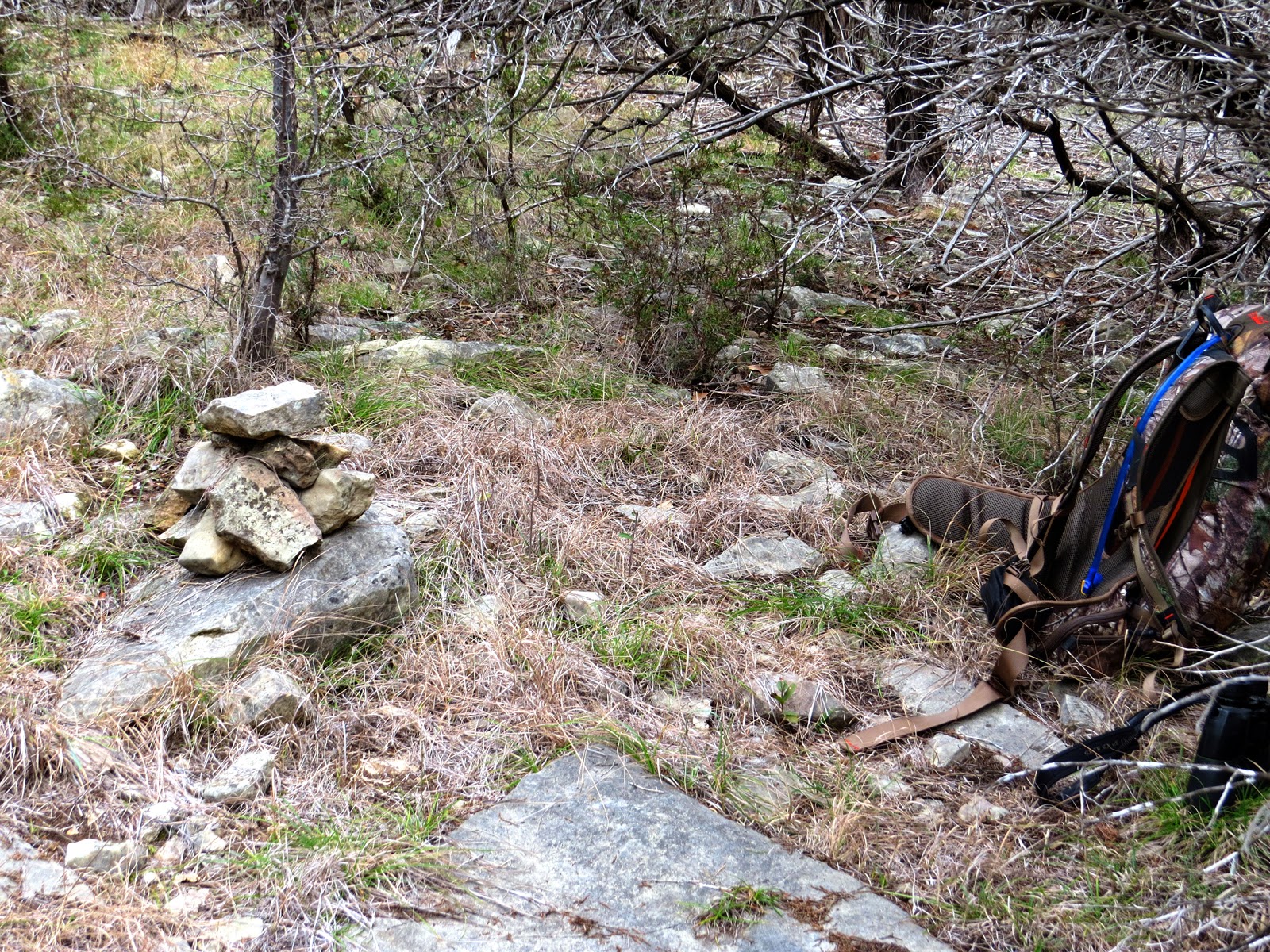 Or here at the top of Wolf Mountain where the pack has been shed while I rest and enjoy in solitude. (The cairn is someone else's from another time. My preference is leaving as little trace as possible.) 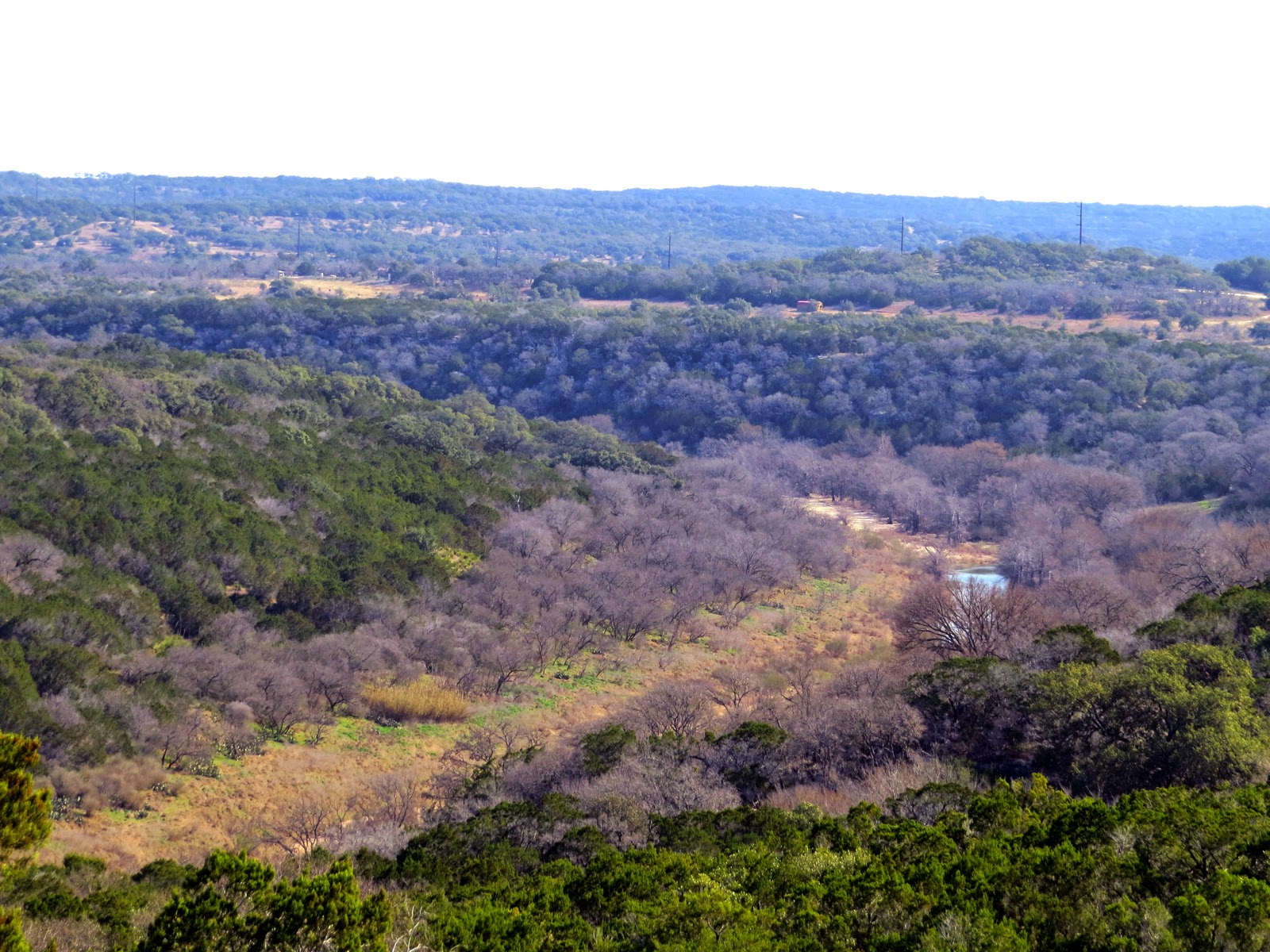 The rounded top of Wolf Mountain is pretty heavily wooded so you have to drop down off the shoulder a little to find this view. That is still park-land over there on the other side of the river and from here it looks like the bluffs on the inside of that bend are scrambleable. There's no maintained trails to get there but that's what makes it worth while!! 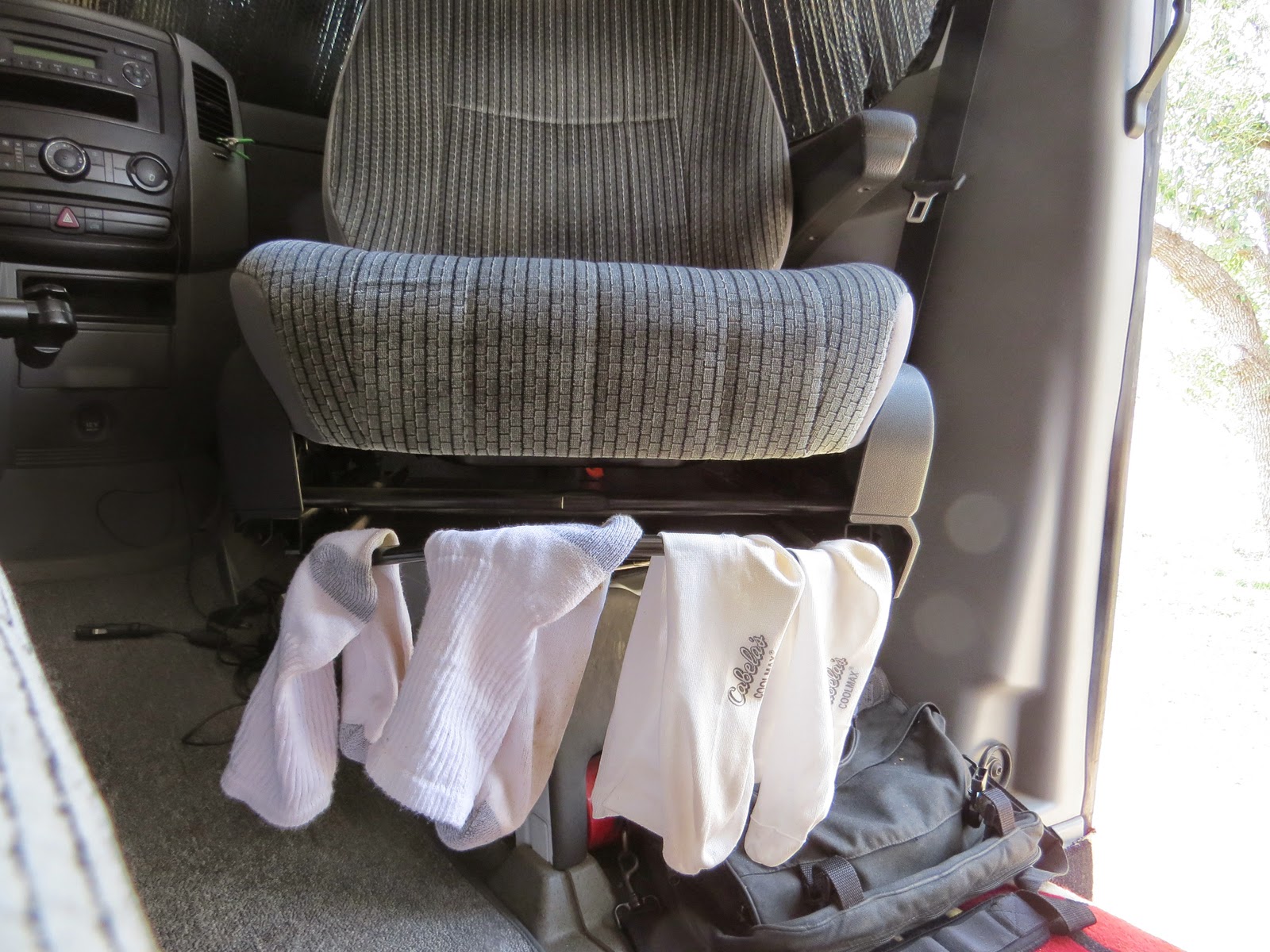 But for now it's time to head back towards the campground  and the Van where, as needs to be the case when living small, everything, including the bar used to slide the seat forward and back, serves double duty. In this case drying out the socks after a full morning of hiking so my feet don't molder when I put them back on for an evening hike. (Only one set of socks allowed per day!) 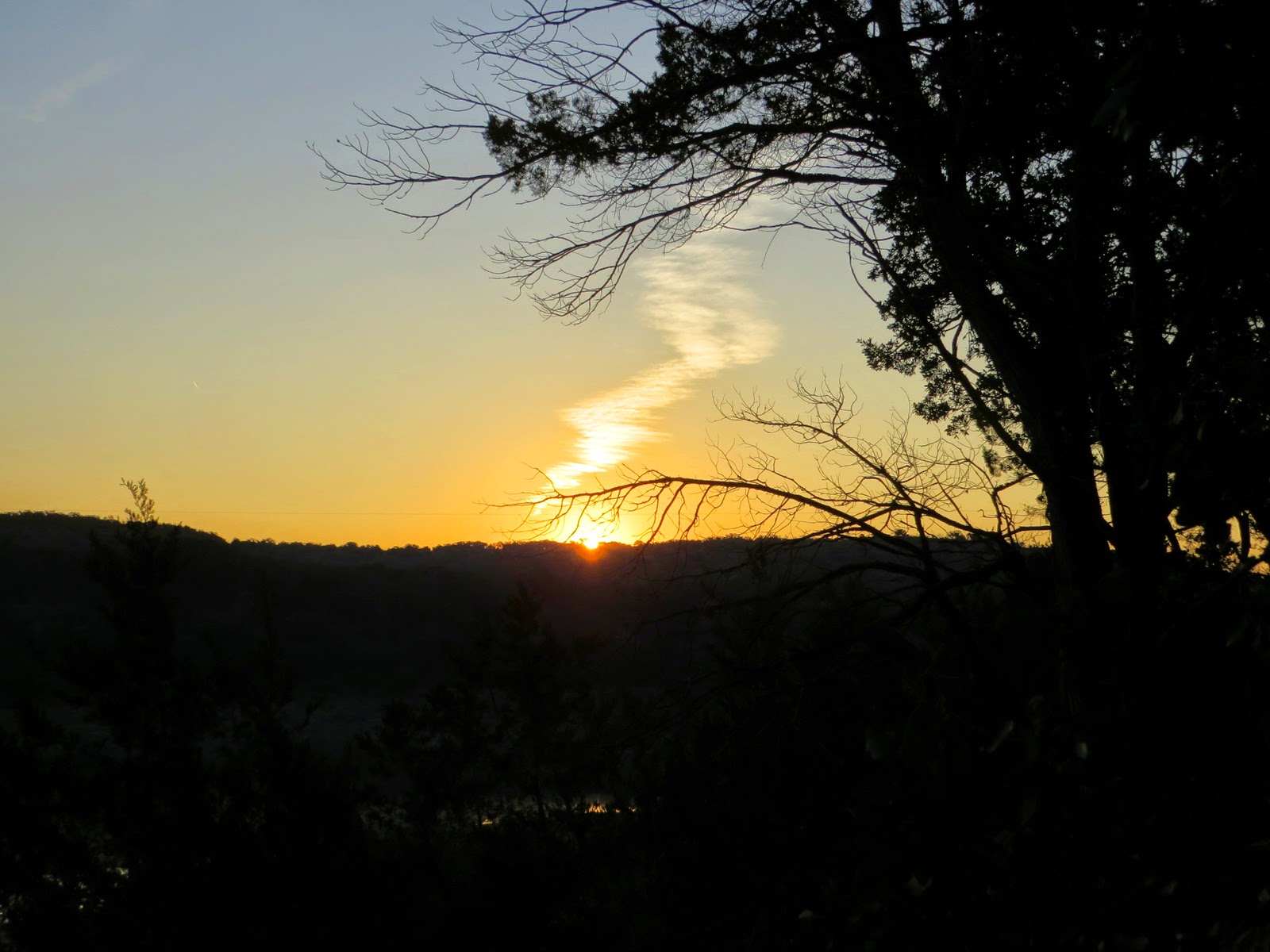 It would have been classier to bracket this post with that sunrise photo at the beginning and a sunset here at the end, but it's difficult to get a dramatic sunset, or sunrise, photo out of the clear skies that dominated on this trip. So instead of the sunset I would have liked, after a 2 mile pre-dawn hike from the campground to the falls at the north end of the park, via the road this time since it's a lot easier to follow on a moonless night than a narrow trail, I made do with the tattered remains of a contrail while the sun threw a few scattered sparks into the river below as it came up over the ridge-line.