It was the early 1870's and a new wave of settlers plodded and rattled and creaked their way into Blanco County west of Austin on iron-clad wheels turning on greased wooden bearings. The war was over and the Indian troubles were winding down. The barely established but growing Germanic settlement of Cypress Mill, centered along the more pastoral Cypress Creek, was about 4 miles to the north, but this new wave of settlers clustered around the more rugged Pedernales River area. 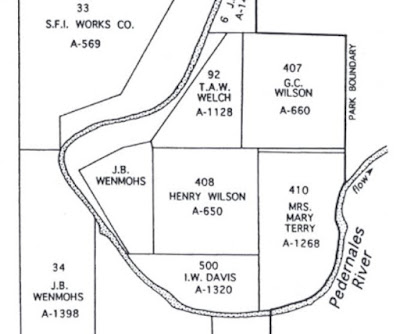 Unlike the cedar-choked thickets of today, (Technically Ash Juniper but called Cedar locally.) back then the land was more savanna-like with open, native-grass fields veined through with mixed Cypress and Oak forests along the rugged creek-bottoms.

Almost overnight, what is now the isolated northeast corner of Pedernales Falls State Park was divied up into 7 tracts of land, and the settlers built houses, fenced fields (They used predominantly stone fences in those days) and planted crops.

They also built a schoolhouse so they wouldn't have to send their children four miles away over a rugged wagon road to Cypress Mill where the classes were taught in German. Interestingly, though Cypress Mill was large enough to be assigned a post office and the area around the Pedernales never did warrant a town, or even a settlement, name, the schoolhouse they built was about the same size, and had just as many students, as the one in Cypress Mill. 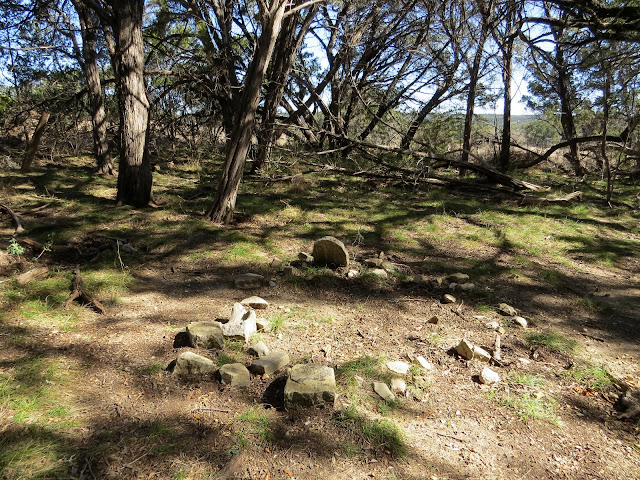 These settler were hearty stock, many whose parents and grandparents had been slowly homesteading their way steadily westward from the east coast generation by generation, but death is inevitable so down the hill from the schoolhouse, which also served as a church, a small cemetery was established.

The settlement didn't last long, 30 or 40 years, before drought forced the survivors to move on. When they did they left at least 19 of their own buried in the ground down the hill from the schoolhouse.


Drought. along with farming practices of the day and over-grazing had drastically changed the ecology of the area and the savanna was eventually choked with cedar thickets. Virtually all trace of the wooden cabins is gone, the stone fences are well on their way to melting back into the earth and any remains of the several small lime kilns built in the area are hidden in the unruly tangle.


The cemetery they left behind isn't particularly difficult to find, but it doesn't necessarily jump out and grab you either. I have watched people walk by on a well-marked trail within a hundred feet of it, apparently totally oblivious to it's existence.


The first time I discovered it, totally by chance, was in the early 80's and at that time even the permanent park staff didn't seem to know anything about it, not even that it existed. Clearly though, there were some people somewhere that knew it was there. Several of the graves, both individual and joint, presumably family plots, have been enclosed in wire fencing supported by T-posts. T-posts first turned up in the very early 1900's so it could well be that this was done nearly 100 years ago, but there also exists a photo of Annie Raines' (1887-1892) toppled tombstone taken in 1944, and someone had to be there to take it.

In the mid 90's John Leffler put together a history of the Pedernales Falls area and around that time the park service installed a low wooden post and carved-plank sign along the nearby trail's edge pointing out the cemetery. 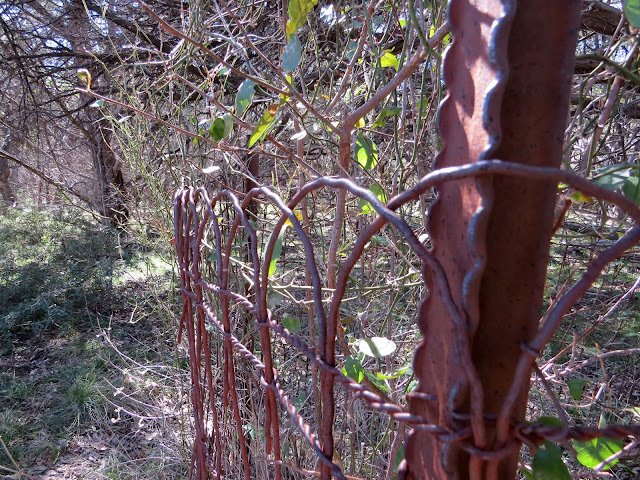 Today the sign is gone and the post is laying mostly hidden in the weeds, so once again, this reminder of those that ventured beyond the post-civil-war city streets, this little bit of their story, is something that you have to be looking for to find. But it's a place I like to come and sit. A place where, if I'm quiet enough, I can hear the echos of the past.