Once again I'm on that familiar road to Michigan, but this time within a couple hours of leaving the house I'm off the map!

My GPS insists, even at zoom level 11 where all the roads, and even some driveways, are visible, that I've left any and all known roads and am now traveling at 65 MPH across open land. At least that's the case with the Delorme Topo 10.0 running on a laptop that I use as my GPS when on the road - or not on the road as the case may be. Maybe if I used a Garmin or some other big-name, small screen GPS some sort of regular update would have let it know that the latest segment of 99, the Grand Parkway, a loop road arcing around Houston at a jagged radius of some 25 to 30 miles from the city center, opened up last month, But I like my Delorme Topo. 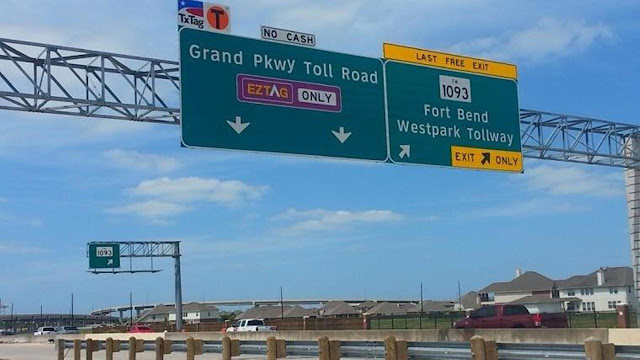 True, it seems to take Delorme forever to add new roads to the map, and Delorme doesn't support a typical update protocol, requiring me to buy the latest version all over again instead, (At around $40 every 5 years or so that's not as bad as it might sound.) but I like my nice big, laptop sized map that I can split between wide-angle and closeup views. I like being able to put permanent pins in my map marking places that interest me. I like being able to download the tracks of my hikes and paddles from my portable GPS onto the Delorme to create a composite record of my treks on the big map. So no, I don't have any immediate plans to change things up, besides, I've gotten kind of used to driving off the map, like US50 west of Jeff City Missouri, SR25 between Lafayette and Logansport Indiana, I49 between Shreveport and Texarkana or I69 slicing across southern Indiana.

Meanwhile, back on the Grand Parkway. With the completion of this latest segment, I can sweep my way from I10 on the west, all the way around to I69 to the north (Which, in my day, was just US59.) and avoid any entanglement with the city whatsoever, which is a good thing since it's the nations 4th largest!!

Of course this is a toll road, almost the only kind of major new road being built anymore, and it's one of those new-fangled no-booths kind of road, one where if you don't have an electronic tag on the windshield you can't use the road, which kind of leaves out the entire demographic most likely wishing to avoid the city altogether, the out-of-towner just trying to pass through, but I've got one of those tags because it works on all toll roads in the state, so here I am, zipping through swamps and pastures and the backside of the occasional subdivision, rather than crawling past strip centers and hospitals and car lots and office building, twisting and dodging a seemingly endless onslaught of on-ramps and unpredictably darting vehicles.


On the other hand - I'm pretty sure not everybody can be happy with the whole deal. I don't know of many that buy remote homes out in the country in the hopes that one day a major highway will come slashing through their back yard like a dull, dirty, perpetually noisy, knife, or ranchers looking forward to having their grazing land split in two and big chunks forever lost to massive ribbons of concrete, and I'm pretty sure I wouldn't be thrilled with having a 10' high concrete 'sound barrier', one that's never going to be completely successful at blocking out the constant whine and growl of of hot tires going too fast on textured concrete, erected down the side-yard of my once near-country suburban home. 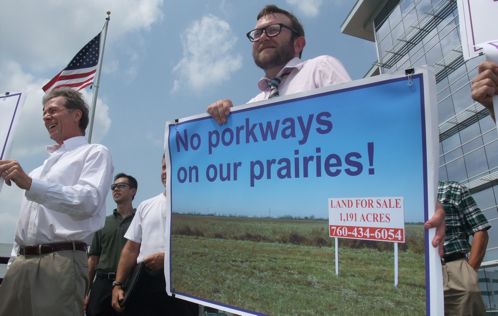 But then again, even the empty land isn't going to stay that way now. I wasn't on the new road more than 5 minutes, looking out on pastures and swamp previously only known to a select few, before I started passing signs for something called Bridge City, (Confusing since there's already a Bridge City in Texas. . .) a new "planned community now just minutes from downtown!" (Of course they don't advertise that it's actually more like 90 minutes during rush. But hey! That's still minutes!!) And it looks like this developer has it right. The first thing going in are the shopping centers. Once those cathedrals of consumerism are up the homes and schools and parks are sure to follow, because who among us can resist the opportunity to buy an oversized house we can't really afford (So in reality it's more like we're renting it from the bank while taking on the full responsibility of upkeep, taxes and repairs.) that's only minutes from places we can spend more of the money we don't really have in order to increase our stash of baubles? Because we all know life isn't worth living without more baubles!

But it all works out fine for me! Now I can slip around the city fairly unscathed and be on my way, all for a handful of bauble-buying deductions on my EZTag account.