Remodeling The Van: The Plan 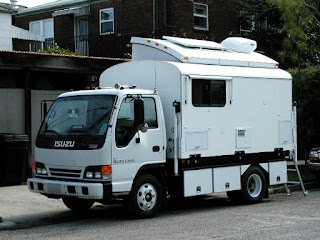 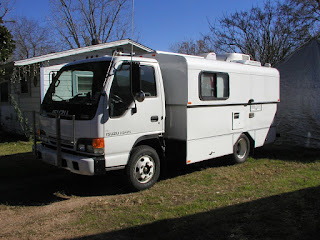 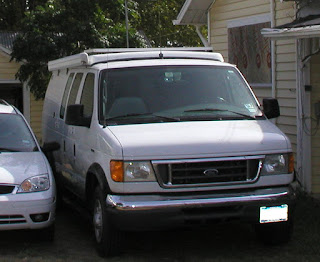 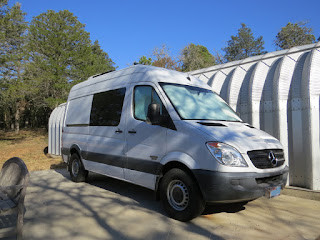 Over the years I've built or modified a number of slide-ins, campers and/or vans. (I know, I know. What is wrong with me?!!) And in these small spaces there's not always much room to show off any styling or design elements, but in what little space there is, the cupboard doors and drawer-fronts do stand out so that's where I've tended to focus my efforts.

Maybe because I'm still trying to 'find' myself, maybe because I get bored easily, or maybe because I have the attention span of a gnat, whatever the reason, over those years I've used a whole range of styles for my doors and drawers.

I've done everything from crude plywood (Which I was too embarrassed to photograph.) 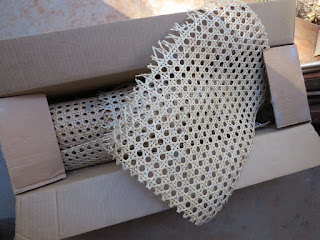 to cabin-in-the-woods with cane inserts, which I'm sure I photographed but can't seem to find any record of now.

But, even though it's going on 2 decades since then, I do still have a box of leftover cane tucked away on a high shelf because - well, you never know. . . 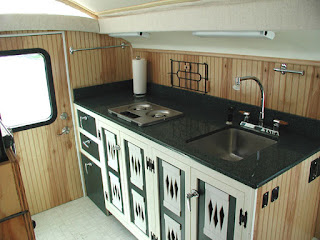 then there was beach-front rustic, 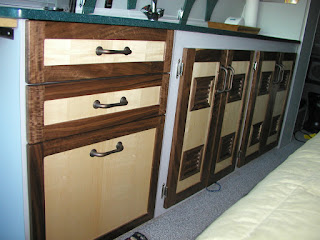 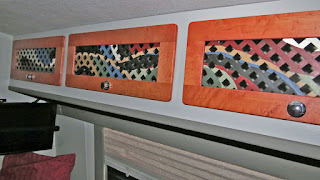 and the current doors, whimsical contemporary with hand-made lattice inserts (The only way to get the proper scale, besides, in my perverse way they were fun to build, stick by sick - I mean stick. . .) painted to match the rugs.


But I've been looking at these latest doors for over 6 years now and that, in combination with the overwhelming urge to do a real shop-project this winter, (It's a sickness best not denied.) has driven me to yet another iteration of cupboard doors.

When casting around for a style for this new project it didn't take me long to zero in on the Arts and Crafts movement of the late 1800's early 1900's.  Basically Arts and Crafts came about in counterpoint to, or protest of, the industrial age and its soulless cookie-cutter mass production. The movement got it's start in architecture, most commonly of the private home, but quickly spread into furniture, built-ins and lamps as well.

On the furniture side, probably one of the more widely known variants of Arts and Crafts is Stickley. This is because, good or bad, right or wrong, Stickley was not at all adverse to taking his designs to the factory and churning them out at prodigious rates, despite the anti-industrial age leanings of the very movement which drove his design decisions. In fact Stickley furniture is still being factory built today under license.

Lesser known are the Greene brothers, or Greene and Greene style. They started as architects but soon branched into the world of furniture, built-ins and lamps as well. The reason they are not that well known today is that they insisted their pieces be hand built, most of them by the brothers Peter and John Hall. As a result, the number of authentic Greene and Greene furniture pieces number in the hundreds, not the tens of thousands-and-counting of the better known Stickley. 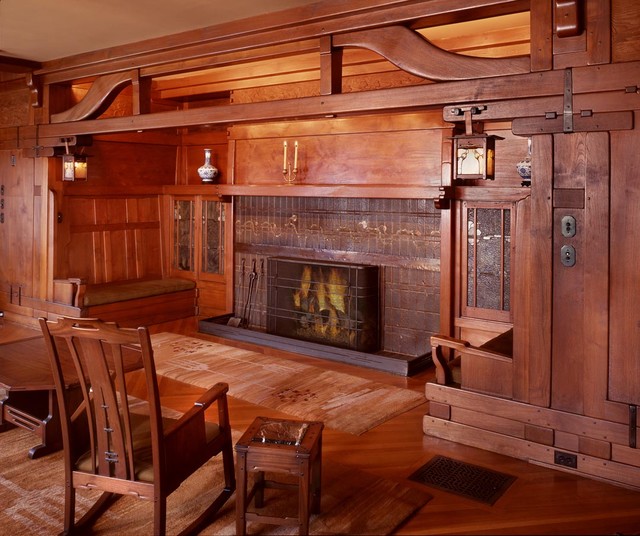 Just exactly what defines the Greene and Greene style is not an easy question to answer, but there are a few details that stand out and I've chosen to focus on four of them.

First, true to the Arts and Crafts movement, oak was predominant (Although here I'm actual getting a little off the Greene and Greene track since more of their work was built of mahogany or teak than oak, but hey, it's my project!) And in those days good straight-grained oak was the first choice, none of this cathedral-grained plain-sawn stuff. Figuring was also highly sought after for the more informal pieces. 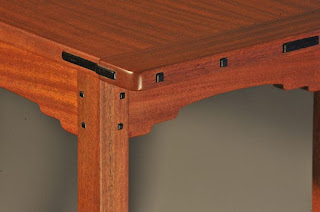 Second, in 1904 Charles Greene visited an expo in St. Louis and came away with some significant Japanese influences, one being the cloud-lift, an example of which can be seen in the aprons of the table above. (Those steps or notches are cloud-lifts.)

Third is the use of ebony plugs and accents, also seen in the piece above. 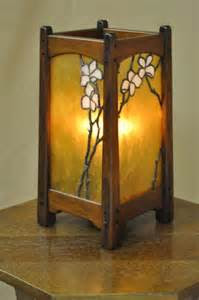 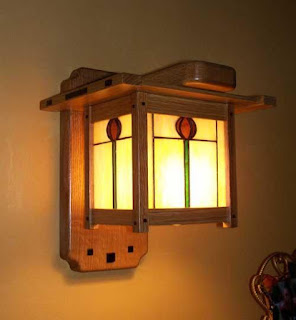 I chose to go with more linear accent elements in the hopes of retaining some sort of sanity. (At least that was the plan. . .)

If you look close at these light fixtures you see that each of them incorporates at least three of the four elements I've picked out to focus on. 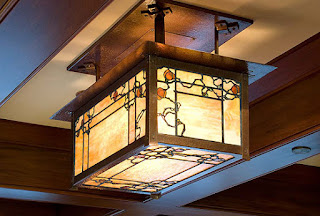 Now all I had to do was retire to the drawing board and churn out my brilliant  design, or at least a design. . .

Now all I have to do is translate that from the drawing board to reality. . .