A Fitting End To An Era


Well, it was bound to happen.

When we collected the mail today there was an official looking envelope from some outfit back east we didn’t recognize.

That’s not all that unusual. Somebody is always hawking something at us, extended warranty on the car, (Danger Danger! Our records show your vehicle is, or soon will be, out of the manufacture’s warranty, leaving you exposed and vulnerable. Give us money so you can feel secure again! If you actually want us to pay out one day --- Ha Ha Ha, that’s a good one! --- just read the fine-print! In the meantime we’ll be spending your money on ourselves.) extra life insurance, (Warning!! Don’t leave your loved ones in debt. Instead, give us money so you can feel secure again. After all by the time you figure out it’s a bad investment better spent on retiring that dept you'll be dead!) or 'Let us convert all your excess gold into cash!!', (Give us a lifetime of jewelry (Oh, clearly they don’t know us. No frivolous jewelry laying around here at all!!) and we’ll treat you to a few modest dinners out. In the mean time we will be reaping the true value of what we took from you by doing the same thing you could have done yourself, and stuffing the profit in our own pockets.) and for maximum sucker-hookage, they almost universally make these envelopes and the contents look garishly official and intimidating.

But when we opened this one to separate recycling from shredding (You don’t ever throw anything with your address or name on it straight into recycling do you??!) the contents understated simplicity immediately made it look more official than all those others. 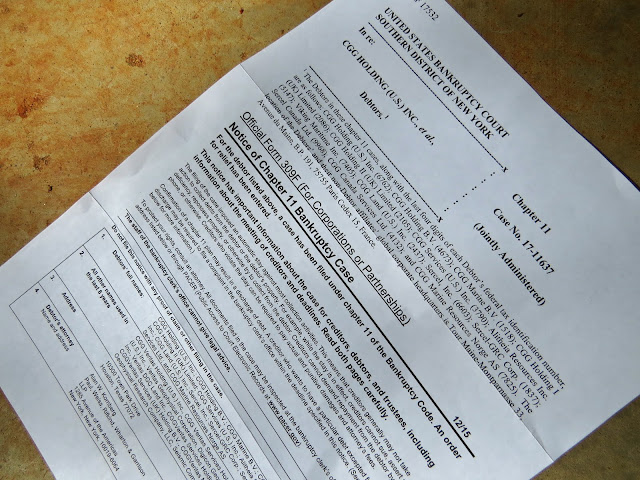 The company I put 31 years into has gone bankrupt.

I put year after year of 60 hour weeks into this company. I traveled countless domestic and international miles for it, and in addition to my usual duties, for nearly a year and a half I was on 24-hour call every other week, much of the rest of the time I was on call every 4th week.  (Much of this was back in the days of beepers and I literally slept with a beeper set to vibrate clipped to my pillowcase every night.) While working there I developed several unique technologies and processes for this company, sticking my neck out when all the so-called experts laughed me off.  (This was a time when Robert “Dr. Bob” Sullivan, staff scientist of the Uptime Institute, claimed the max power density of a data center was 150 watts per sq. foot, yet we were already running at 220 watts and continued to go higher every time we reconfigured or built a new data center.)

Now in no way am I claiming to be instrumental in what this company accomplished, after all, over those 31 years there were anywhere from 500 to 7000 other employees, many of them also working their guts out,  but I certainly did my part.

I started with Digicon Geophysical Company in ’81. These were the wild-west days of oil exploration and Digicon was right up there at the front of the pack. Days of couriers carrying the Venezuelan payroll from Houston down to Caracas in cash every month. (And you can imagine what was being carried back!!)  Days of working shoulder to shoulder with the company CEO on the pitching deck of a seismic vessel out in Cook Inlet trying to untangle the switchboard that directed the signals from all the sensors in the 5 kilometer long cable we were dragging through the water. Days when the hotels in Bogata had chain-mail blast curtains over the windows and the staff would get pretty upset if you pulled one aside to peek out.

But those days were short lived and by the mid to late 80’s things were settling down. By that time, due to the excesses, Digicon owned, in addition to the usual seismic exploration equipment and divisions, a shipyard in Louisiana and two private jets. All this excess weighed heavy on our core business and we went through a couple lean years of retreat and restructuring. We came out of this so strong and cash-heavy, we were very attractive for a hostile takeover, so did an end-around and formed a partnership with a Canadian company thus becoming Veritas DGC.

After a prolonged ‘adjustment’ period  between the conservative Canadian culture and the gung-ho US ‘way’, the resulting amalgamation was nicely balanced with a propensity  for taking intelligent risks and staying out ahead of the competition, which gradually built Veritas DGC into the, or at least one of the, premier seismic data acquisition and processing companies of the world.

But then the CEO, Dave Robson,  (Canadian) retired in 2004 and in a surprise move, instead of tapping the highly groomed Tim Wells for the position, went outside and brought in a frenchman, Thierry Pilinko  (I know french and frenchman are supposed to be capitalized but I just can’t bring myself to do it.) I really would like to sit down with Dave over there on one of those golf courses in Phoenix he’s so fond of and ask just what the hell he was thinking. And I do hope that he is as unhappy with the results of this bone-headed move as the rest of us are.

You see, within a few years Pilinko turned around and sold the company to one of his cronies.  You need to understand that In the french business world cronyism is rampant. (and to be a crony you have to have gone to the same school as the other guy, otherwise it’s a no-go, a no-crony as it were.) This is so deeply ingrained in the french psyche that when a frenchman  moves in as CEO he brings his whole crony-crew with him, replacing all the top officers.

In the press the CGG-Veritas thing was classified as a merger but the french were so intimidated by the culture of Vertitas DGC that they, under the leadership of frenchman Robert Brunck, turned it into a rout. Fairly early on in the process of this ‘merger’ in which one top position after another was filled with a french person, I and a whole bunch of other US, UK and Asian leaders of the company had to sit there in a dim meeting room in a crappy hotel south of Paris as Brunck threw what amounted to a tantrum because we all wouldn’t just roll over and do it the french way.  Quite a few of us were ready to walk right there, but through some misguided sense of loyalty to the people working for us, we stayed. But that didn’t stop the rout . (BTW, I don’t know who started that whole french food is the benchmark crap, my personal experience from my three trips there is that the food sucks. It was so bad we insisted on going off the set menu a couple days into that first conference but were told that would have to wait until after tomorrow because tomorrow night’s Chicken Cordon Bleu was already defrosting. Defrosting!!)

You see, the french are far more into ‘face’ than any Asians I’ve ever worked with, which is quite a few, and the idea of being on the cutting edge of anything scares the crap out of them because ‘what if we are wrong?’. (Being wrong is about the worst thing that can happen to a frenchman.) They would much rather sit back and let the other guy try first, once they see it really works then it’s OK to go there, but of course, in the world of high-tech, this means you are always trailing behind.

So the crushing of this terrifying, forward-looking Veritas culture continued and a few years after I retired in 2012 Veritas disappeared completely as the company was officially renamed, at no small expense, back to CGG.

And now I hold the results of all this in my hand. A single page proclaiming to all the world the sort of miss-management that took one of the premier geo-physical companies all the way down into the mud.

And yes, I’m aware that this sounds like I’m whingeing, (That’s Brit for whining.) and I suppose I am.

True, I severed all ties with CGG 5 years ago. I hold no (worthless) stock, have no equally worthless options laying around, they offered no health insurance once the paychecks stopped, and I’m not beholden to them for my pension. (My Aunt and Father-In-Law have had nice reliable company pension incomes for many years, but there is no way, in this day and age, I would ever trust my entire future to a company or union pension!!) 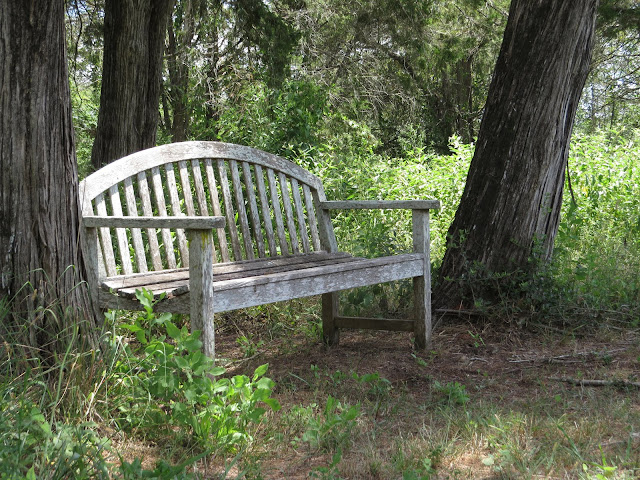 This bench is one of several installed that were installed in the courtyard of the Veritas DGC world-headquarters we built in 2000. Eventually the teak benches became redundant when they were replaced by cast aluminum benches and I managed to snag this one. It now sits in a little grove looking out on our pond and is a reminder of the glorious days I lived first-hand, and there's nothing the french can do about that!

And despite what they did do, destroying what many of us struggled to build, I worked hard, was paid well, and we saved hard while living modestly, so by the time I'd had my fill of frenchmen at age 58, we were able to retire completely on our own dime, our own savings, beholden to no-one. dependent on nobody, completely free of that world.

After all this time I should be over mourning the loss but even so, receiving this bit of paper, this official notice, kind of put a pin in the whole thing and left me feeling melancholy all over again. I suppose it’s analogous to reaching the anniversary of someone’s death. The reminder dredges it back up again.

Of course filling chapter 11 doesn’t necessarily mean the official end of the company, (As far as I'm concerned the unofficial end has come and gone.) but if it does survive it will take years to recover from the bankruptcy, and then, as long as the french are at the helm, the recovery will never result in anything more than a gutted shadow of what Digicon and Veritas DGC were.