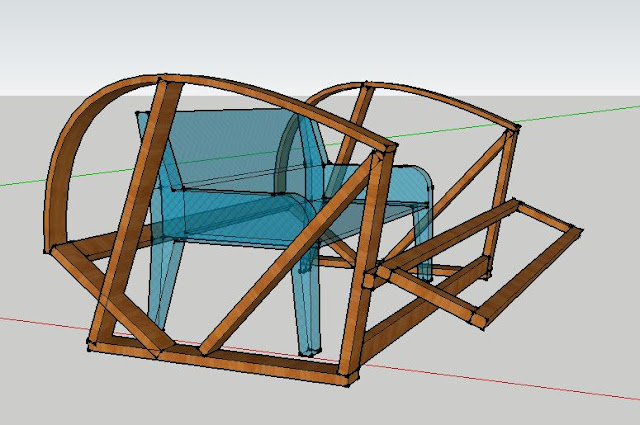 OK, last time I managed to make up the two arches for the Cat Couch Cover. The next step is to put some structure under those arches to hold them up.

I suppose that might seem like a simplification, a lot like saying "We have the roof-rafters, now we just need to put a house under them." but really, the structure to go under the arches was fairly straightforward. Not as straightforward as simple vertical studs would have been but - well - here, see for yourself! 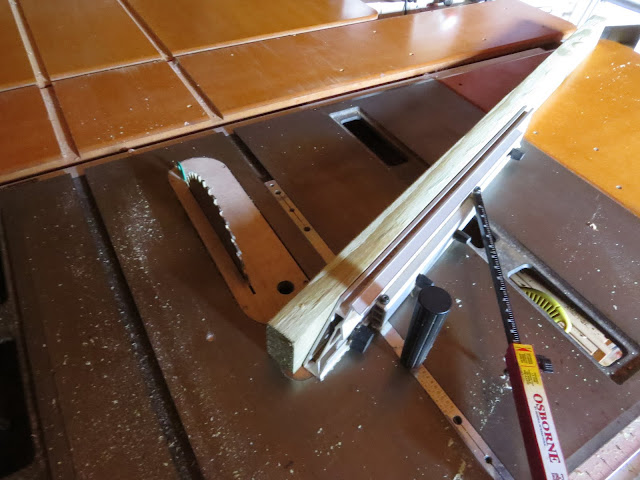 The first step was to rip my 2X6 lumber down to narrower widths and this is so simple I didn't even bother with a photo. Just set up the rip-fence, a feather-board or two and feed the lumber. Easy-Peasy.

Except!: See the little green doohickey there right behind the saw-blade? That's my reeving-knife and has no purpose when crosscutting as in the photo, but is a very important safety device when ripping lumber. The knife is exactly the same width as the cut the blade makes and keeps the freshly cut lumber from pinching in on the back of the blade which will then lift the lumber, violently, and pitch it right back in the face of the operator. Reeving-knives come in various forms but whichever form you find on the saw you are using, make sure you use it!

I could have stared with 2X4's, and even left them 2X4, but 1) 2X4's are milled from the leftovers, in other words, the worst wood from the tree, so 2X6 or larger is generally better wood; straighter, cleaner and less twisty, and 2) As you will see in a moment, I have a thing about blindly using dimensional lumber as is.

Even if I had bought twice as much 2X4 lumber instead of the 2X6's I did, I still would have ripped them down to get sticks that are proportional to the project. I have this thing about using full-dimension lumber where it isn't necessary. It drives me nuts to see 'professional' builders using full 2X4 lumber to build closets, vanities, cabinets, and couches, especially when they are going into tiny-houses!! The resulting structure is cheap and clunky-looking, way over-engineered, weighs more than it needs to, and sucks up valuable space that could be better used for storage.

Anyway - point is, ripping dimensional lumber down to proportional sizes is far more professional looking and dead-easy to do.

For this project most of the sticks are finished out to 1 1/2" X 2 3/4". Even this is chunkier than strictly necessary but since this project will live outdoors, exposed to the merciless weather, and even more merciless cat-claws, the extra heft will help it last just that much longer.

The next step, since all my verticals are wonky and have no right-angles, was to trim one end of the slightly over-length sticks to the proper angles. (Finally, text that is relevant to the photo above!) I took the angles directly off my SketchUp drawing and transferred them to the sticks with my cross-cut guide on the tablesaw. 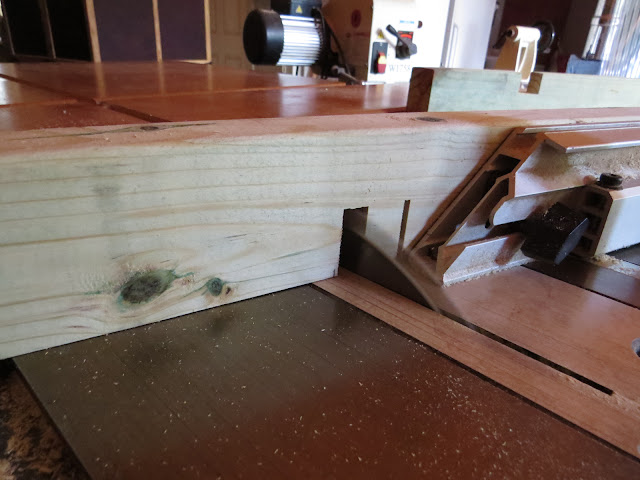 I also have one half-lap joint under each of the two arches where two of the sticks cross each other.

After setting the proper angle on the cross-cut guide, cranking the blade to the proper height, (One half the thickness of the stick) and marking the position and limits of the half-lap on the relevant sticks, I carefully nibble away the excess wood by making multiple passes over the blade shifting the wood about a blade's width for each pass.

Note that my first cut is not quite to the limit that I marked. Once I get the rest of the wood nibbled away I'll try to fit the notch over the other stick. It won't go because I cut short of the mark, but I will make additional passes across the blade, each one taking off a very thin slice, and test fitting again until I have a snug fit that goes together with a gentle wack from the heel of my hand. (Any tighter and there's no room for glue and I risk spitting the wood. Any looser and the long-term integrity of the joint won't be as good as it might be.) 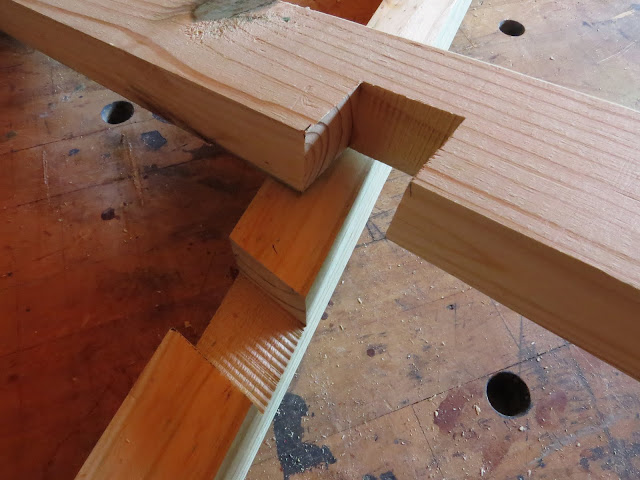 Once both sticks are notched 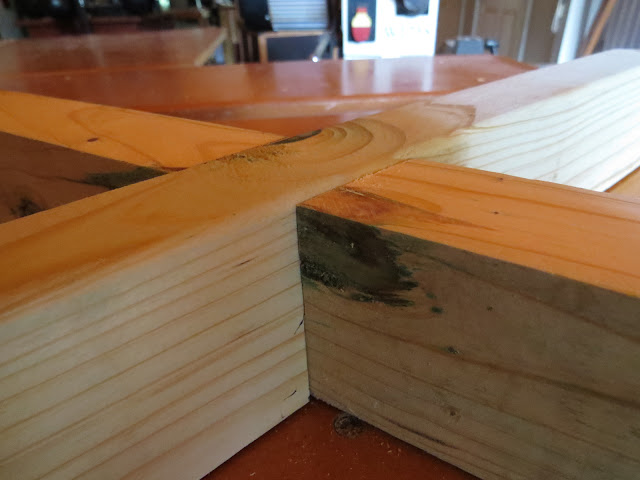 they slip together with a good wack, forming a nice tight, strong joint, 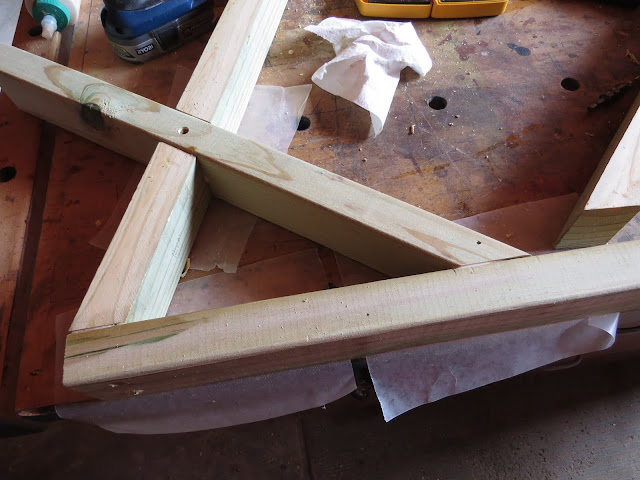 especially once glue and a single screw are added.

This all might sound complicated but the reality is that in the time it took you to read about it (That's assuming you're still reading. . .) you could have had the joint half completed. 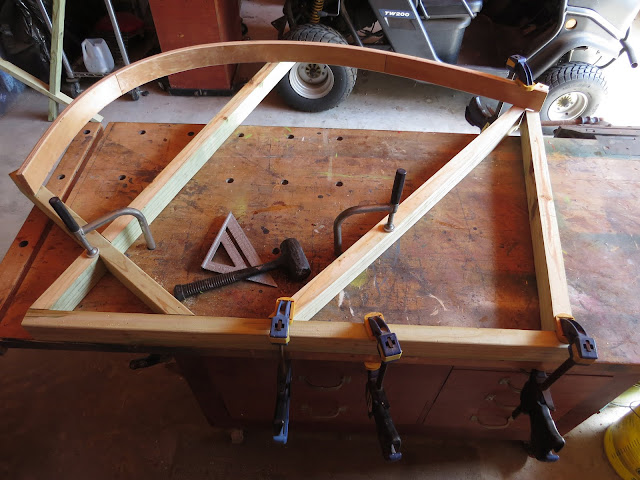 With all the angles cut where the vertical(ish) sticks meet the base I clamped everything down in it's proper position then laid the arch across the overly-long ends of the sticks so I could mark and cut them to their final lengths. 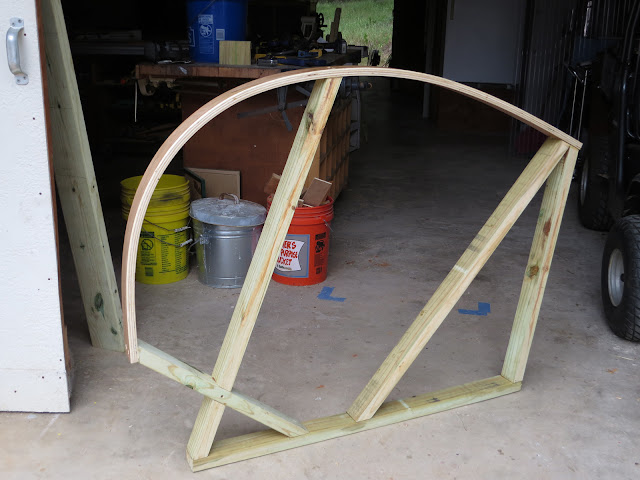 After that is was just a matter of gluing and screwing everything into place then repeating the whole operation for the second arch. 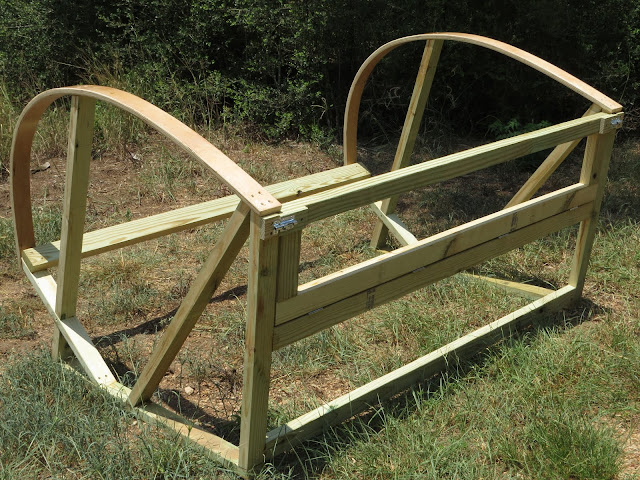 After that it was a simple process to connect the two arches together with a total of three straight cross-members, make up the simple hinged access panel with more straight sticks, 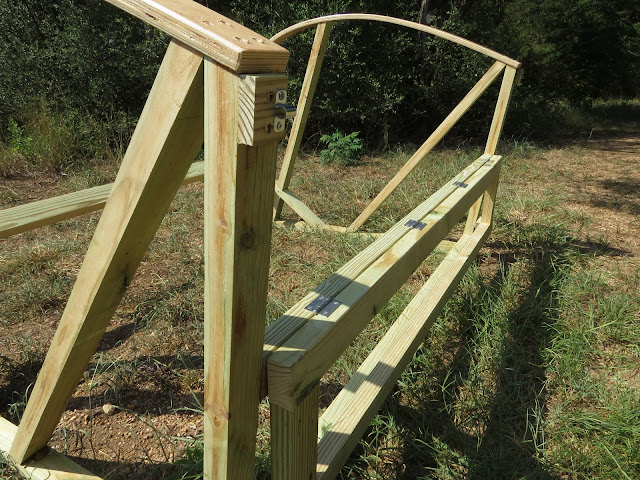 then add the hardware to hing and latch the access panel.

By now the temps were bouncing up against the 100 mark and the sun was pretty-much straight overhead which meant The Wife's side-by-side, which had been kicked out of the shop to give me some assembly space, was sunburned to the point where I could smell the vinyl seat cooking, so I tossed the assembly out beside the driveway and rolled the side-by-side back into the shade of the shop.

Tomorrow I'll finish the project up by putting the PVC roof-panels on.