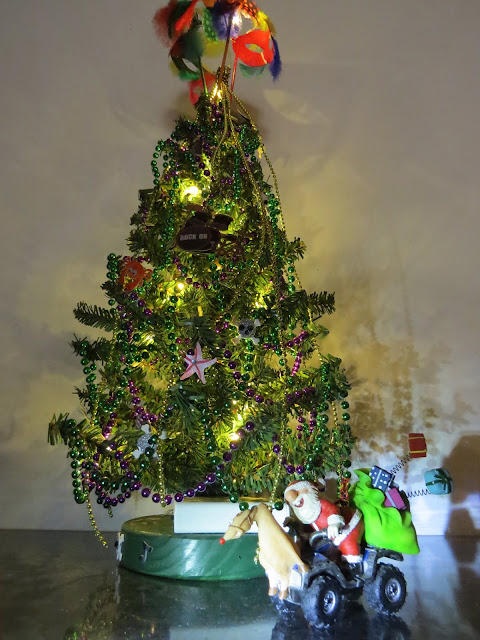 These miniature trees, though very inexpensive if bought in January, tend to come with rinky-dink little plastic bases and and the first task for most of them is to pull off the plastic base and switch them over to simple wooden bases like you see above, 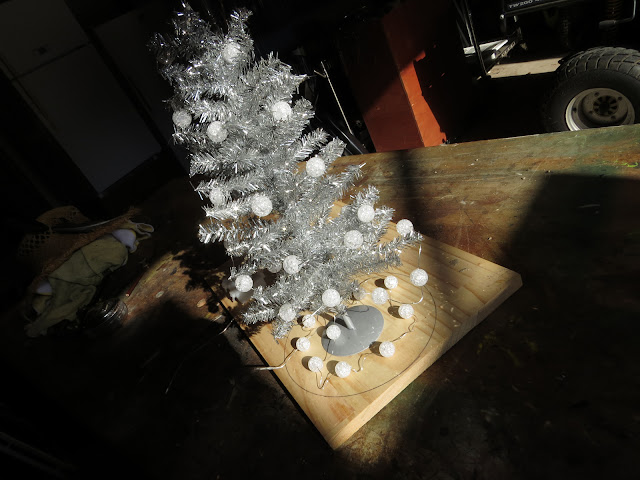 but this tree came with a metal base that was spot-welded into place. The base was too light and small for any sort of stability (and since this tree was destined for Elmer down at the travel trailer it needed all the stability it could get!) so we had to come up with something a little different. Oh, and The Wife had determined that there were 9 lights too many for the tree on this string so we came up with the idea of embedding the extra bulbs into the stand. (The Wife will string lights, strip them off, and string, strip, string, strip over and over again as she frets and frenzies herself into finding just the perfect arraignment.)

We started by scribing circles on paper with a compass until we both agreed that we had the right diameter for the base, then scribed that circle onto a bit of scrap wood. 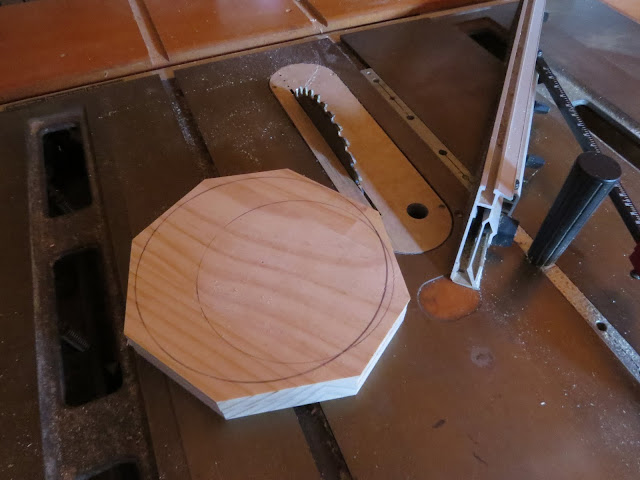 Since the stand was going to be two layers thick I stuck another scrap of wood to the first with double-sided tape, then rough-cut them down a little on the table saw. 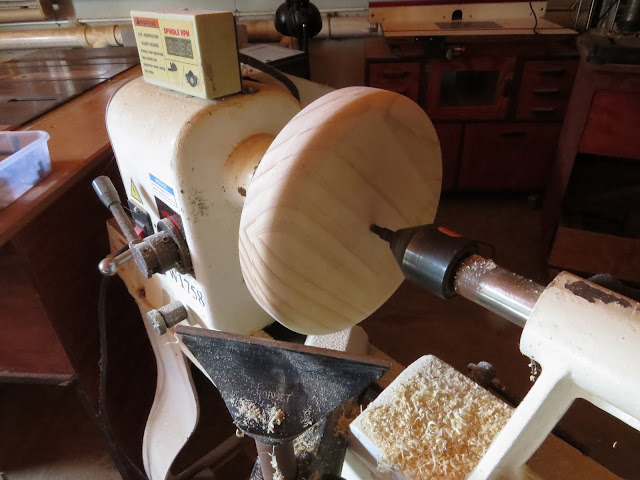 Then it was on to the lathe where I cut them down to the scribed circle and rounded over what will be the top edge. Notice that it's a little difficult to differentiate between the grain of the sandwiched layers here. That's because when I taped them together I matched the grain as best I could because - well, why not?

What is nearly invisible here is a small V-notch I cut along that seam between the two layers while I had it on the lathe. This creates what wood-workers call a reveal where the two pieces meet.  Wood constantly moves which makes hiding a butted seam, such as here between the upper and lower pieces, nearly impossible over time. Rather than trying to hide the seam and ending up with what looks like a mistake, a reveal turns that seam into an architectural detail that's supposed to be there. 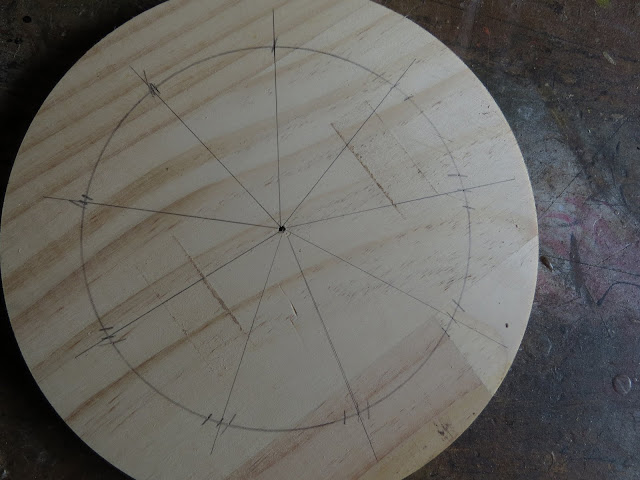 The next step was to turn the blank face down and mark 9 evenly spaced spots that would be where the extra lights from the too-long string would go. There's several ways to divide a circle into evenly spaced segments but my favorite bench-top method, though simple in practice, is more of a blog-post of it's own to actually describe.

Once I had the segments marked I drilled a small hole straight down through both layers where each ray crossed the scribed circle, then I marked a line, a witness line, on the outside edge of both layers so I could put them back together again in the proper alignment, before prying the two layers apart. 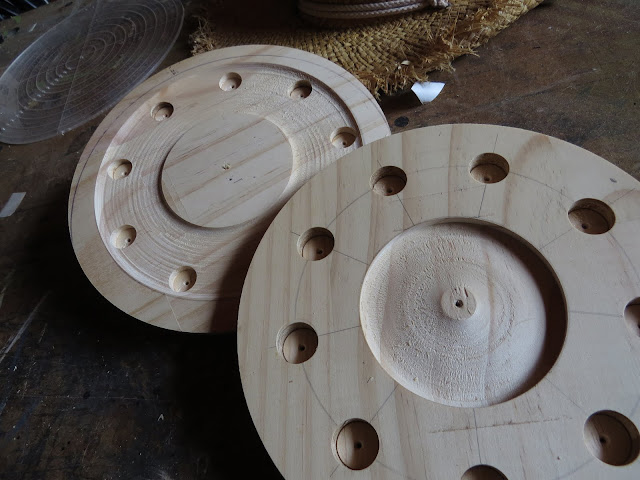 I needed them apart now because I would be doing different things to each one.

The bottom layer, the one closest in the photo above, got pockets drilled into it where the nine lights would eventually sit, then it was back onto the lathe to carve out a central pocket where the base of the tree would sit.

The top layer, farthest away in the photo above, also got pockets drilled into it for the lights then it too went back onto the lathe so I could cut a relief into it to make room for the wires running between each light. 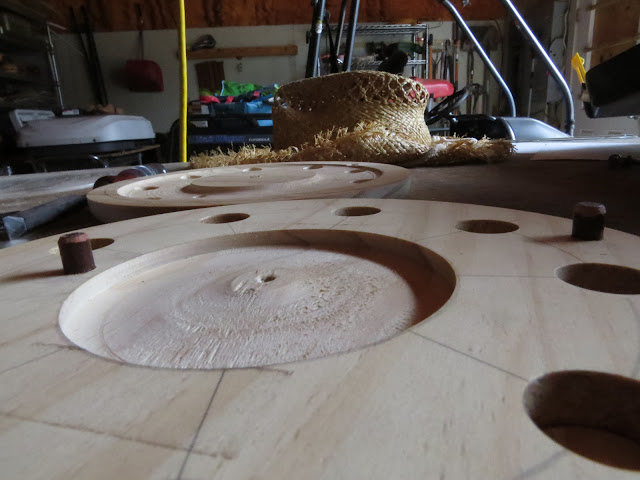 Now that I knew where the lights and wires were going to fall, I added a couple small dowels into the bottom layer with matching sockets in the top layer so that getting the top and bottom back together in the proper alignment in the future would be simple. In this case I used short lengths of a round pencil because it was handy. One of the dowels is near the outer edge while the other is closer to the center. That way 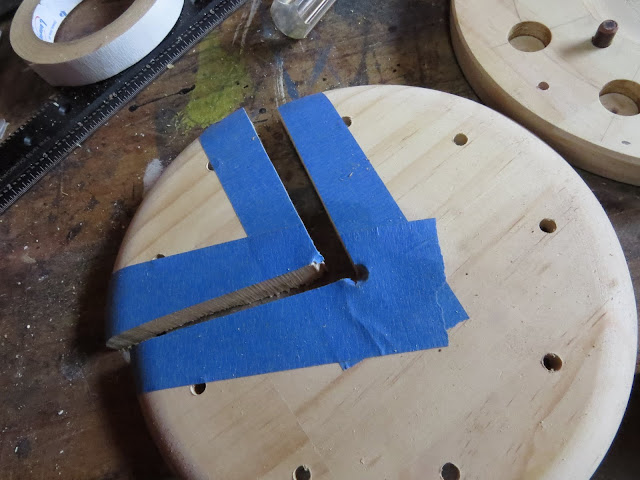 when I cut a pie-shape out of the top layer, there will be no question as to which piece goes where on the bottom layer. Before cutting the wedge out of the top layer I drilled the center to fit around the stem of the tree and also enlarged the holes from the bulb pockets through to the top to let light shine through. After cutting the wedge I carved a notch along one edge of it for the wire coming out from the bulbs to the box containing the batteries 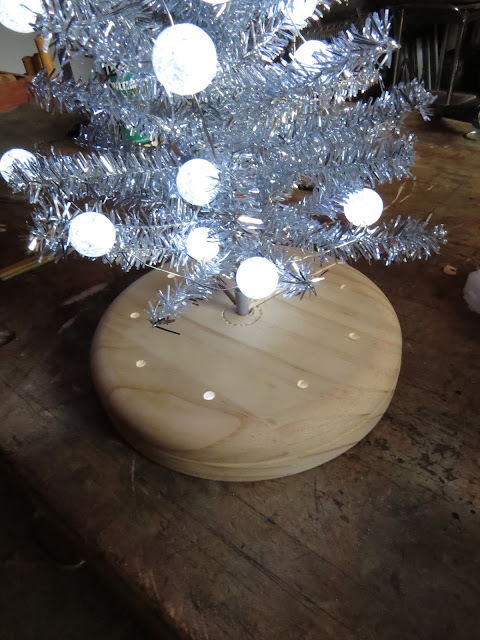 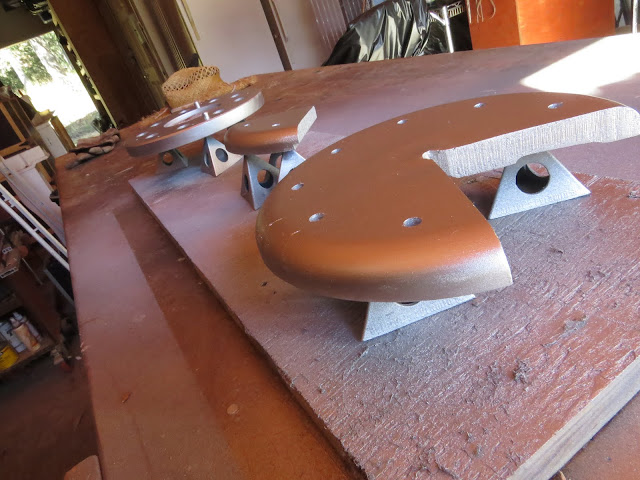 The final step was to fill any stray tool-marks with wood-putty, do some sanding and spray on three quick coats of a metallic silver paint.

Actually the final step was to assemble the finished tree and stand and deliver it to Elmer, but I managed to forget to take any photos of that. . . figures. . .