When out and about with The Van I’m either hiking or biking most every day, so ‘working out’ is just part of the lifestyle, but when I’m hanging around the homestead (and the three or four regular readers I have might remember that I burned the hell out of my travel budget by mid-2017 so have been spending a lot of time hanging around the homestead since then waiting for the budget to trickle-charge.) staying in condition is something I have to pay attention to.

It wasn’t always that way.  Up until a few years ago (OK, maybe more than a few but I can still remember those days so it can’t have been all that long ago!) I was able to coast along on the remnants of my youth so ‘working out’ was a nice, responsible, grown-up thing to do, but not necessarily required. But now that I’m old enough that I will soon be shifting from years to months as I count my way down to Medicare, if I don’t stay on top of it, if I allow too many of those well it’s a little wet, or cold, or hot, or late, so I’ll do it tomorrow days to slip by without moving the muscles, banging the heart, and just generally getting’ the blood flowing, I find myself needing a rest-break on the journey from one side of the grocery store to the other. And let me tell you, it’s highly embarrassing to be pointed and laughed at by a cart full of sticky-faced rug-rats pushed along by a frazzled, and judging by the looks I get, disapproving parent, because I’m sprawled across a nest of family-sized bundles of toilet paper I’ve pulled down off the shelf (Clean up on isle 5!) since the floor is just too damn hard and far away to lay down on anymore, gasping for breath as I try to recover enough get-up-and-go to get-up-and-went all the way over to isle 8! 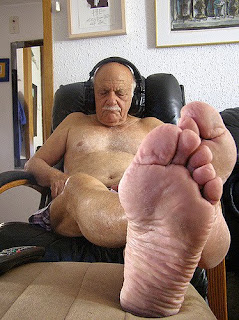 By the way, I’m not at all convinced about this shrinking-as-you-get-older crap. If that were the case then why does the floor, and everything floor-adjacent, such as my feet, keep getting farther and farther away every year??

(Nope, not me. Just something I stole off flicker)

Anyway – over the years I’ve done a lot of ‘fitness plans’, the Royal Canadian Air Force Fitness Plan (Screw this! I’m not Canadian!!), Billy Blank’s Tai Bo videos, (Dude! My legs wouldn’t go that high even when I was a kid!) Bo-flex machines, (Oh the hell with it, I’ll never look like those guys.) and the like, but the one thing that I seem to be able to stick with on a regular basis is cranking out a few sub-20 minute miles sandwiched between a warm-up during which I try to convince my body that it really can move that way, and a cool-down during which I gasp for every breath as if I’m about to go under for the last time. (And yep. This spectacle is also highly embarrassing which is why I prefer to do it in private.) 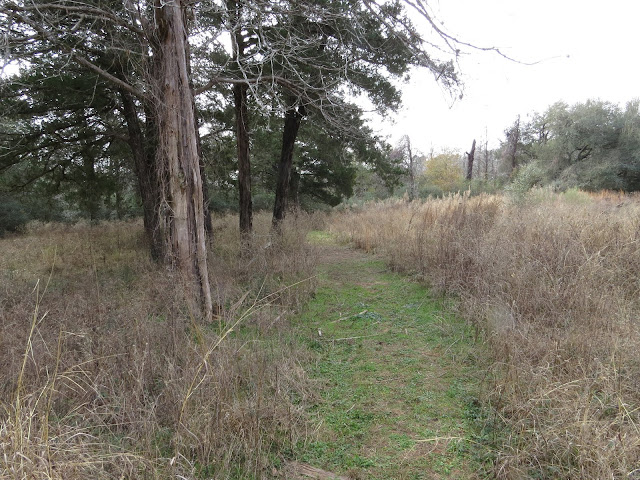 Here on the near-side of the property, the side of the pond where the barn, driveway, electric easement and meadow create some open spaces, I’ve mowed a looping track from the gate (east) to the pond (west) and side-to-side between both the north and south fence-lines that adds up to just over a third of a mile. It’s not quite mall-walking, there’s a little bit of up and down involved and the ground under foot isn’t paved, but except for that climb up to the gate, which is a 9 percent-er, it’s pretty mild and even my mother was out there on it last time she visited. 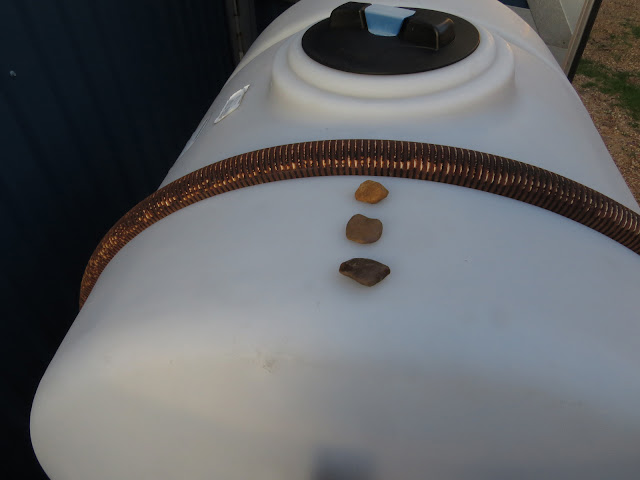 But after the first lap or so it gets pretty mindless and boring. So much so that in order to keep track I have these three stones sitting on the water tank we use for the fire-pump. As I pass the tank at the end of each lap I grab a stone and put it in my pocket. If there are no stones left I pull one back out  and leave it on the tank. When all three stones are back on the tank I know I’ve made right around 2 miles and can switch over to my combination yoga and tai-chi cool-down. (which makes up part of a desperate attempt to remain flexible and retain some balance into my older years)

There used to be more trail on the mostly wooded back-side of the property. In fact years ago I had a little over a mile’s worth of walkable trails back there, but then one day, down in a ravine on the back side of the main ridge, a pair of trees fell during a storm, stacking themselves like dominoes right across the trail. The lower of the two trees was propped up on it's own branches about 8 feet above the trail with the upper tree sitting about 6 feet above that.

There was no way I was going to mess around under those unstable trees and risk ending up looking like road-kill! I suppose I could have cut a bypass around them but they were pretty big trees and it’s really difficult to cut trail all the way around them down in that thickly vegetated ravine, so, what with plenty of traveling and large shop-projects to keep me active at the time, I took the easy way out and abandoned the back-side trails. 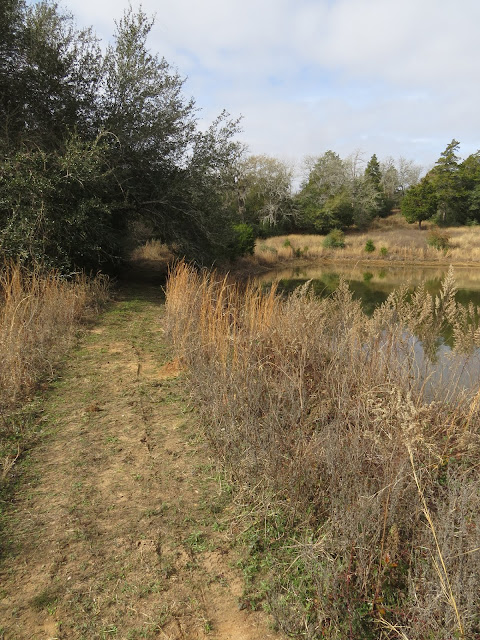 But now, forced by budget into a long, unbroken stay at home, and with my current string of projects shrunk down to a non-aerobic table-top sized, the idea of opening up those old trails again was looking better and better.

Since the dam is the only connection between the front and back sides of the property, the first step was to carve a tunnel through the Live Oak that drapes over it. 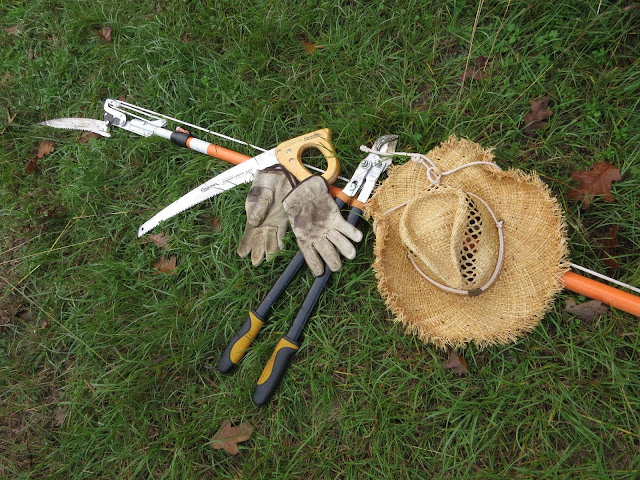 After that was cleared I could throw my tools over my shoulder and trudge off up the hill like some mutant cousin of the 7 dwarves and spend a couple hours at a time opening up those old trails again,or, in some cases, cutting entirely new trails. 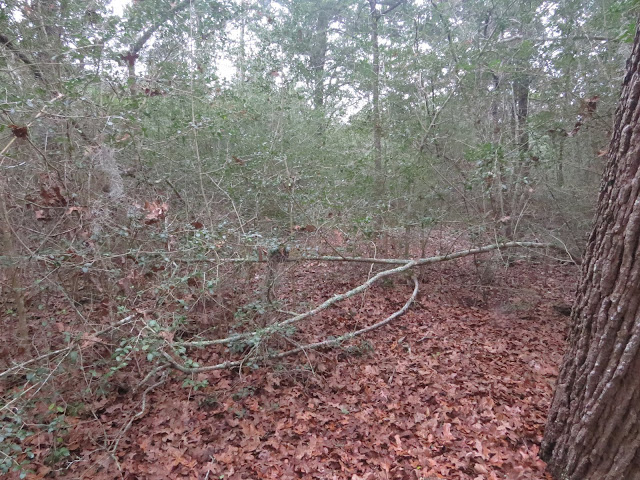 Depending on where I am back there, in a couple of hours 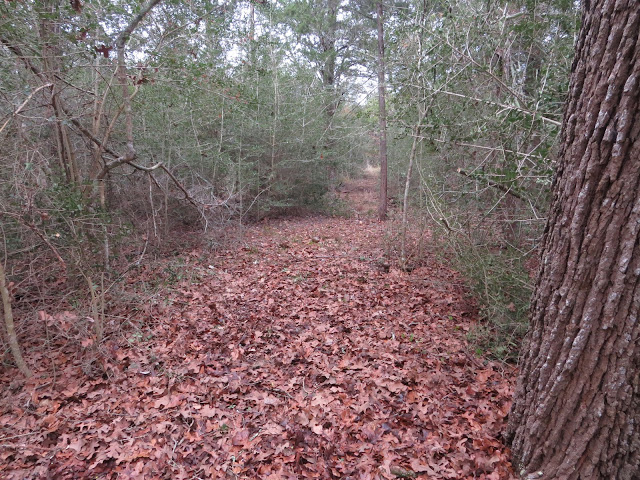 I can clear as much as a few hundred feet of trail per session, or as little as 20 feet.

It may seem a little perverse in this modern age, but I prefer clearing trail with hand-tools. It is slower, but it’s a lot quieter, and one heck of a lot less risky, than using a chainsaw. Besides, what’s the damn rush anyway? When finished I will use the trails to help maintain my physical conditioning and all that lopping and sawing and bending and straightening and pushing and pulling and lifting and dragging is a pretty good workout too, so why waste the opportunity?

But there was one spot that required more than my puny little hand-saws.

After 6 or 7 years the domino’ed trees have settled to the point where they are fairly stable and the lower tree has sagged down to about chest high, 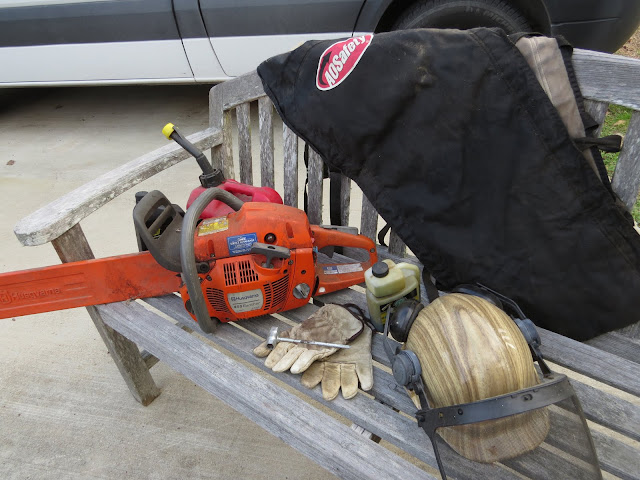 but I clearly needed to drag out the big guns if I was going to cut my way through. I had hoped my small, 14 inch chainsaw would do the job, but a quick measurement slapped that idea into the debris underfoot and I had to drag the bigger, and way heavier, 24 inch chainsaw up and over the hill 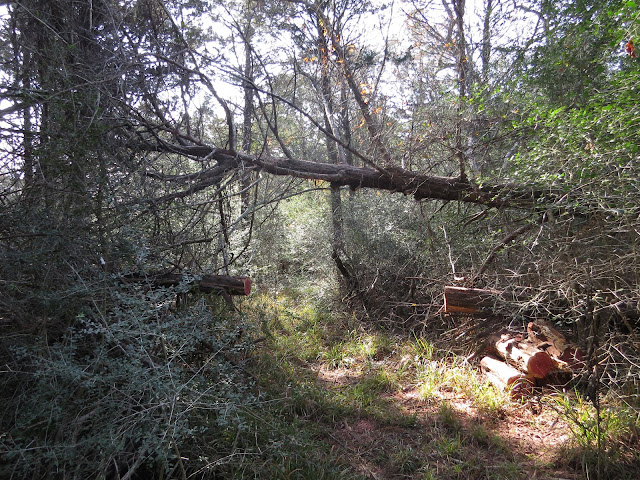 to clear the way instead.

After 3 to 4 sessions per week for a couple months I have managed to open up old, or cut new, trails as shown in blue. The next step is to cut another new trail along the red line and create one more option for getting to the back fence-line. (You know, in case some other tree decides to come down over one of my fresh new trails, which, since we had 45 mph winds around here overnight, is certainly a possibility) but I already know that’s going to be a long slog to clear because of a steep-sided and heavily overgrown ravine right about where the jog in the red trail is.

You see, walking these trails isn’t a stroll around your Grandma’s retirement community, dodging golf-carts driven by the mostly blind and waving to all the porch-perchers so they don’t talk bad about you at bingo.  Though the difference between the low and high points on our 14 acres is less than 100 feet, there are no flat spots anywhere. (We had to carve into a hillside in order to create a spot for the barn to sit.)The average grade overall works out to about 5% but there are a few 12% hills out there too. Steep enough to generate a little burn, in both thighs and lungs.

Speaking of which, it’s time to stop writing and get back to work.