I understand that some may not consider the recent actions of a 'professional' driver (and I use the term with more than a touch of sarcasm here) as dangerous. For instance I assume that the driver in question didn't think of his/her actions, excessive speed, failure to maintain safe distance from other vehicles, failure to maintain lane, as reckless, or at the least thought those actions were justified in some way, but from where I sit; you know, down here close to the road in a smallish car; those actions were highly questionable and downright scary!

I was eastbound on a piece of I-10 where the speed limit is 65 and while doing the speed limit I was in the left lane passing a cement truck. Notice the K-barriers on both sides of the main lanes in the image below? That's because, not only is the speed limit here 65, but this part of I-10 is currently under construction which makes this a double-fine zone. 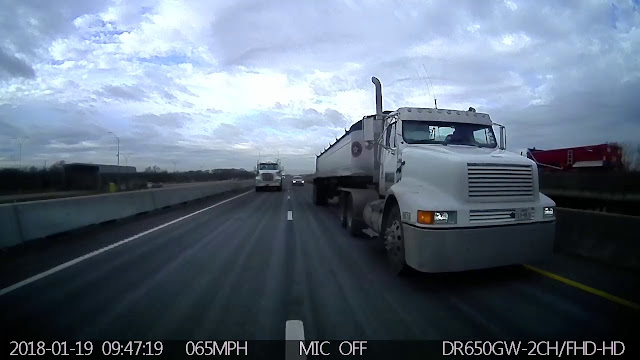 How do you know how fast I was really going? Because our front and rear dash cams are equipped with GPS so date, time, and speed are embedded in the video. (And with the proprietary app rather than a generic MP4 player, so is location) Another feature of the cameras is that because of the 160 degree viewing angle, things are a lot closer than they appear in the video. A lot like that right-hand side mirror.

As I was passing the cement truck another truck was coming up behind me at a high rate of closure, which means he/she was doing well over the posted speed limit with no visible intention of slowing.

Because of this I signaled and began to move into the right lane before I was comfortably clear of the cement truck, but that clearly wasn't good enough for the approaching driver who moved partially onto the left shoulder and proceeded to pass before we had cleared the lane. 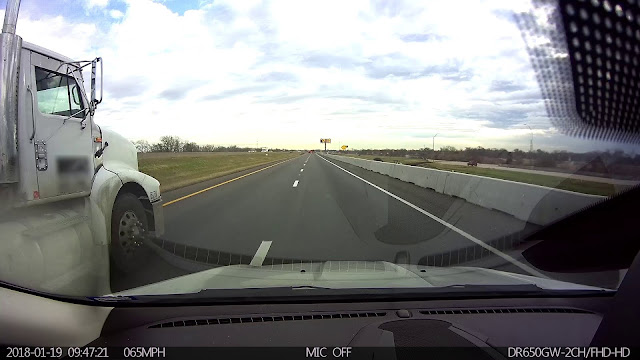 Yep, this was my driver's eye view as the 80,000 pound truck (heading into the city like this these gravel trucks are carrying a full load) blasted by a few inches to my left, roaring along the rumble-strips out there on the left shoulder.


Taking the tractor # and the door plaque, DOT number and TXDMV numbers off the recorded images as this driver blew by me, (OK, time to change the underwear!) I contacted the trucking company with the details of the incident, including the fact that I had GPS-confirmed video:

Since I did get a response back from them, albeit several days later, I've blurred the company name as well as DOT and TXDMV numbers in the image above. If they hadn't responded my plan was to plaster their details here and on other social media sites.

I am a skeptic by nature, so maybe it's just me, but though the trucking company responded with all the right things: thanks for taking the time; safety is our number one concern; the incident has been reviewed with the driver; etc., I still have my doubts since they were not interested in a copy of the video.