OK, after my brutal ‘bike encounter’ yesterday I did eventually manage to drag myself up out of my chair, though it was hours later, and painful. I’m pretty sure my original intent was to do something about dinner, but some masochistic streak buried not-quite-deep-enough inside me saw me picking the Quad-B up off the ground where, in an earlier fit of spite, I left her when the wind blew her over. Then, instead of doing something sensible like crawling into The Van and preparing my dinner salad, I found myself mounting the Quad-B instead. 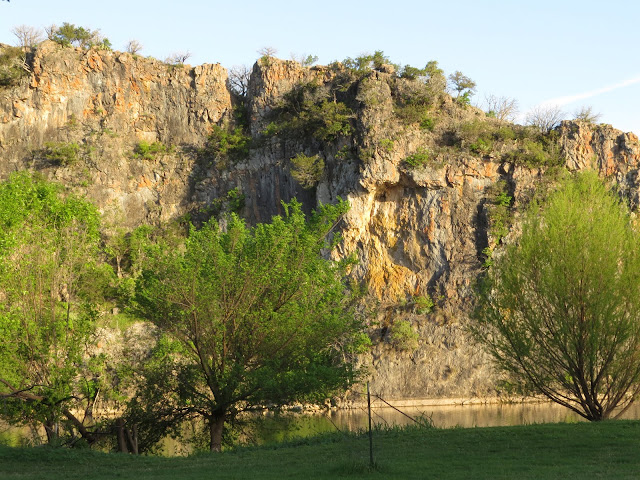 The two of us, once more joined foot to pedal and saddle to butt, limped our weary way down along the river where we could watch the sunset away from the other campers. 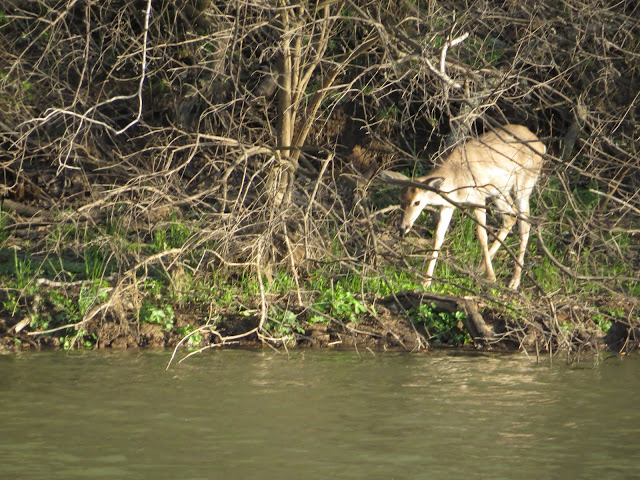 It was quiet enough that this girl tip-toed her way along the opposite bank apparently unaware of my presence, 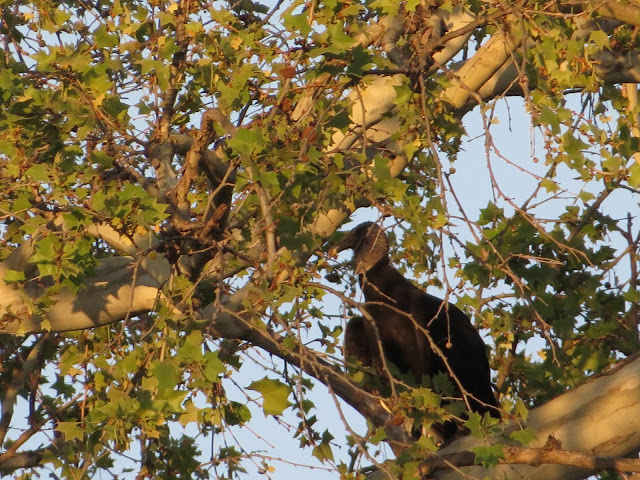 and this guy, his kind usually much more shy than this, didn’t seem to mind sharing a little quiet-time with me in the last of the rays. 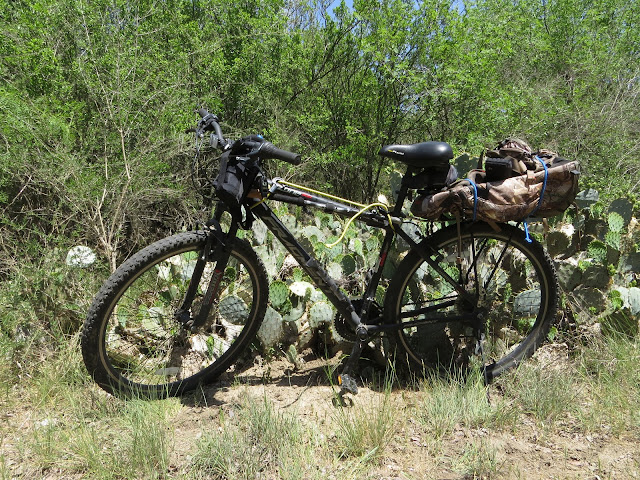 That quiet little ride must have mended things between the Quad-B and me because the next morning found me loading her up for another attempt at Plan A.

Pack strapped to the rear carrier, water-bottle/camera carrier on the handlebar, straw hat dangling down my back by its chin-strap, Tractor Supply ball-cap on my head with bike helmet over that, (For some reason most bike helmets don’t have a proper bill to shade your eyes) and most importantly, hiking sticks bungeed to the bike’s crossbar. (I double-checked that last point just to make sure this time!)

That 3-mile-plus ride/walk up the River Trail wasn’t any easier this morning, but since I knew what to expect this time it somehow wasn’t as bad as yesterday. 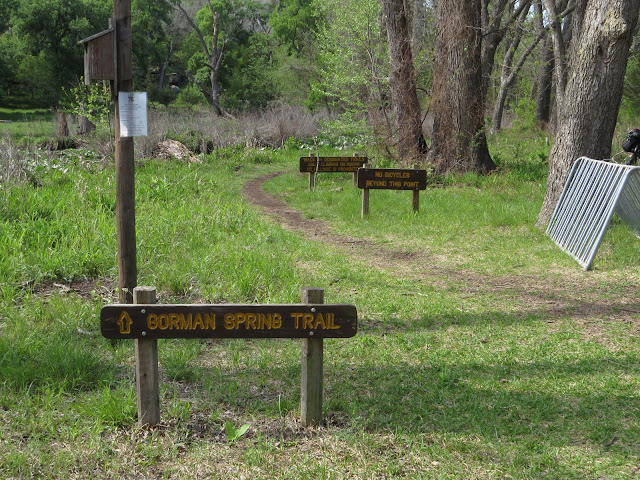 This time I had all my gear with me, like I was supposed to yesterday but didn't, and when I got to the trailhead of the Gorman Springs Trail I was able to morph from trail-rider to hiker.

To get here it’s either the 3.4 miles up the River Trail or a mile and a half down the Gorman Falls Trail, both of which are bikeable, (Hey! If I can do it after that fiasco yesterday pretty much anyone can!) but since the Springs Trail is not bikeable a handy bike-rack has been provided.

Oh, and see that little white paper posted there just below the bird-house? That’s recommending you not let your little children run on ahead because there’s mountain lions in the area. . . 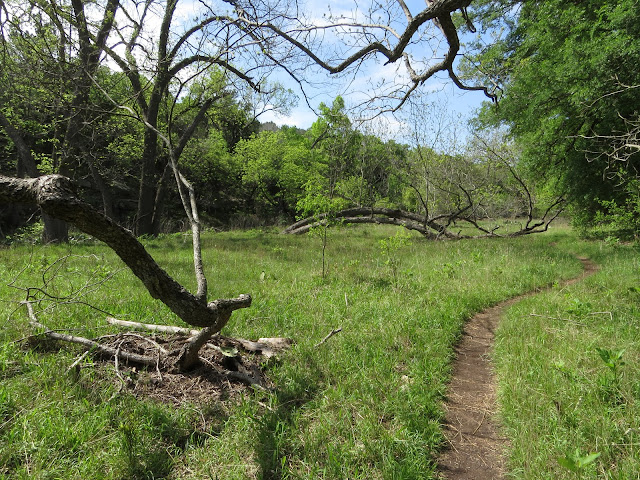 The Gorman Springs Trail meanders up the pleasant little valley/canyon formed by Gorman Creek which, 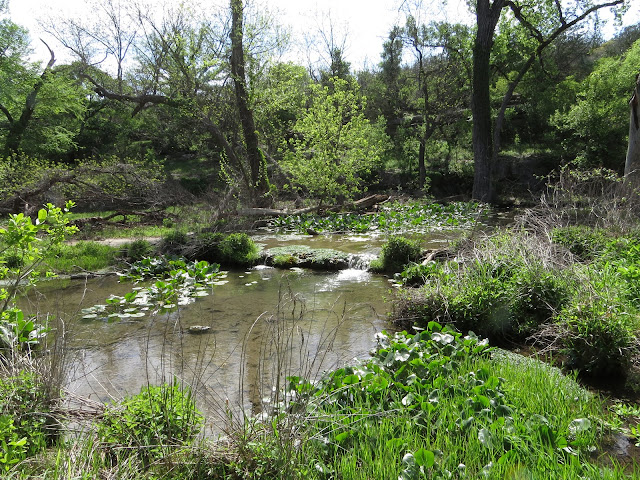 thanks to the strong spring at its headwaters, has a pretty decent flow for its relatively short length. (About a half mile from spring to trailhead then another quarter mile to Gorman Falls where it drops 65 feet into the Colorado River.) 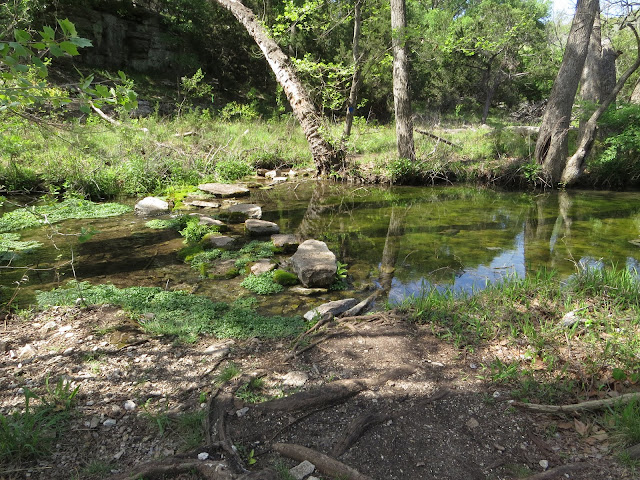 The trail crosses the creek twice but at normal water-flows both crossings are dry-feet as long as you can stay on the sometimes slippery rocks, which, if you remembered to bring your two hiking sticks along, is easy. 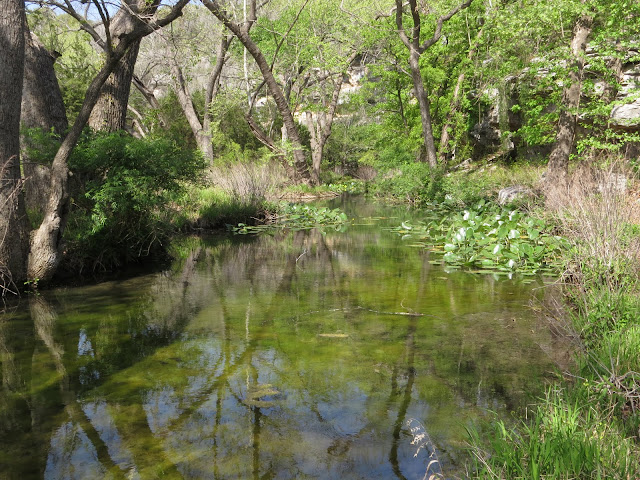 The lower end of the watershed is a picturesque, pocket-sized valley, 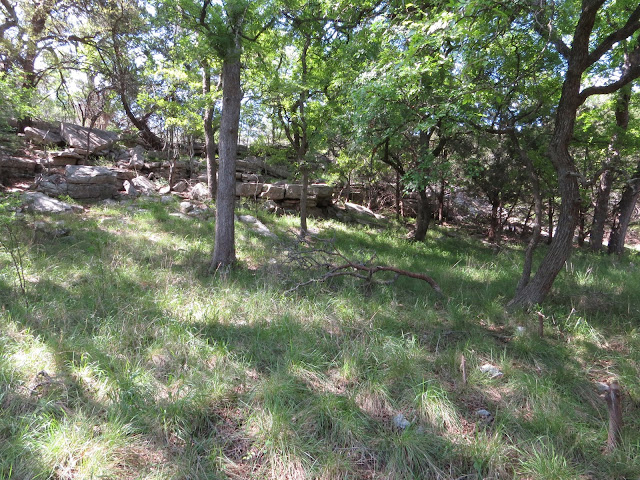 that quickly starts morphing into the kind of limestone lined canyon which is more common for the area. 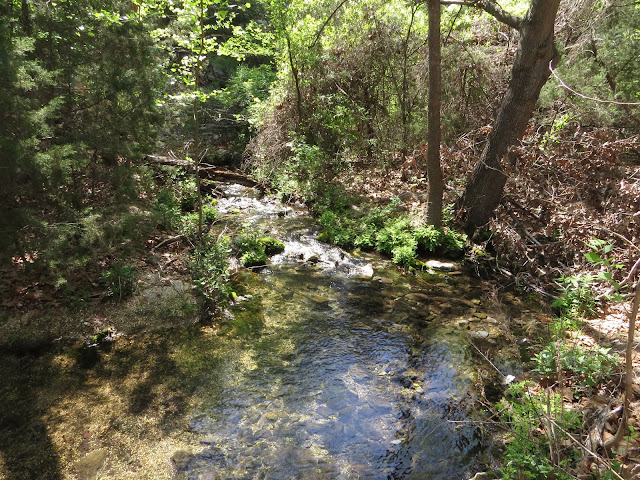 But other than a few riffles, there’s nothing ‘wild’ about Gorman Creek. Even when it goes over the falls (a different hike) it’s very measured and orderly about it. 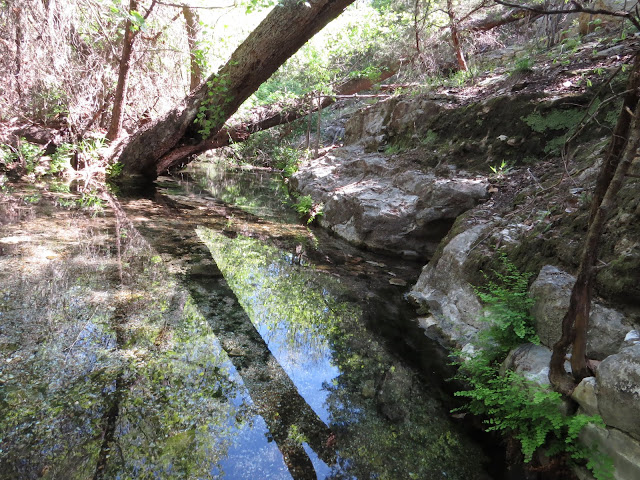 The headwaters, where the trail ends, are a rock-lined pool into which the spring flows 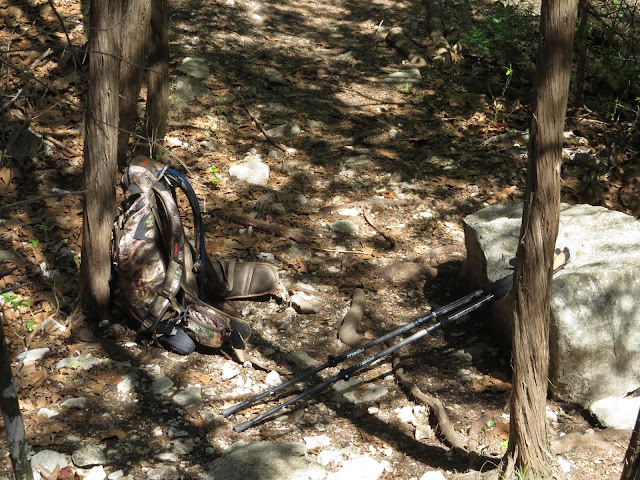 and this is a good spot to shed gear and relax for a while.


I tried to include the toe of my boot so this photo would ‘read’ better, but I don’t think I was very successful. This is shot looking straight down along a foot-pipe that has been dropped into the pool right where the spring is bubbling up. 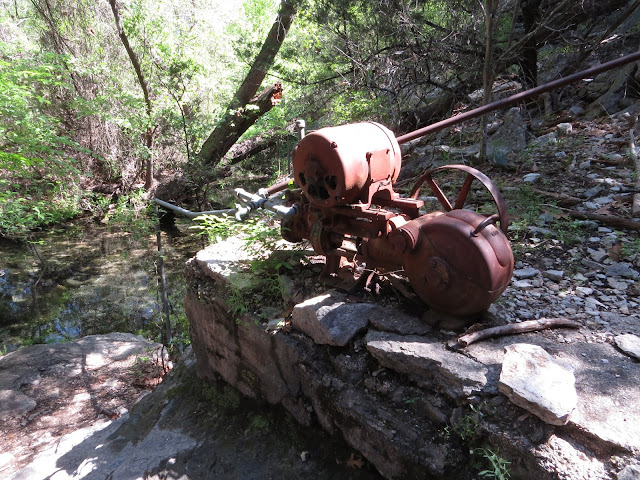 The other end of the foot-pipe is attached to this horizontal piston pump driven by an electric motor via a (missing) belt. The piston is tucked down there just below the electric motor and driven by the geared crank encased in a protective housing to the right. 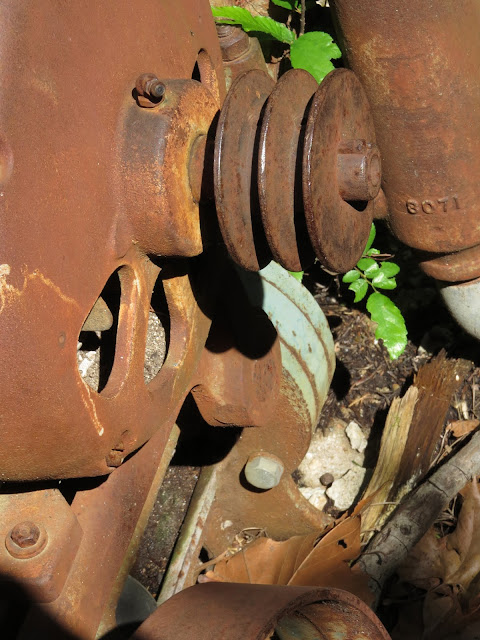 Confusingly, the motor seems to be set up for a couple V-belts while the large drive wheel (a small piece of which is visible at the bottom of the photo) looks like it takes, or once took, a flat belt. 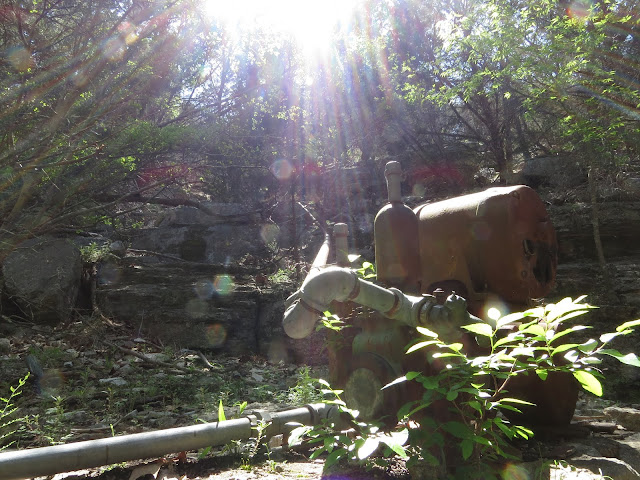 The discharge pipe, barely visible beyond the pair of 90 degree elbows where it arches up through the center of the photo, snakes its way up and over the edge of the canyon-rim above.  The Gorman homestead was up there somewhere but I suspect this pump hasn’t been used since at least the mid 80’s when the state bought the land. 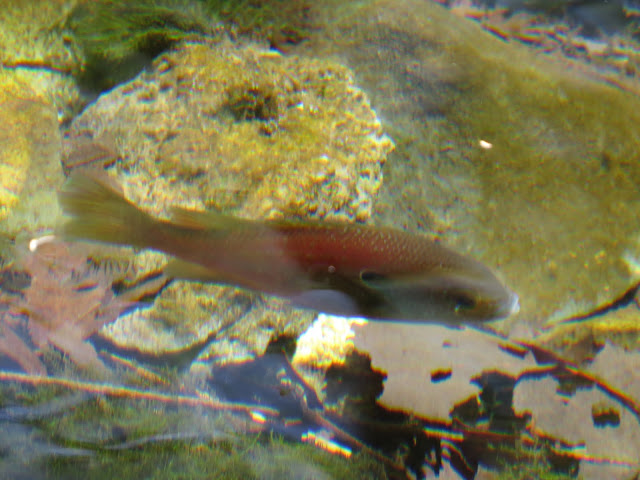 If you're patient enough to sit still along the deeper parts of the creek you just might get a glimpse of the purest strain of Guadeloupe Bass left in the State.  I’m not sure if this is juvenile or breeding coloration, but the Guadeloupe Bass is generally greenish. 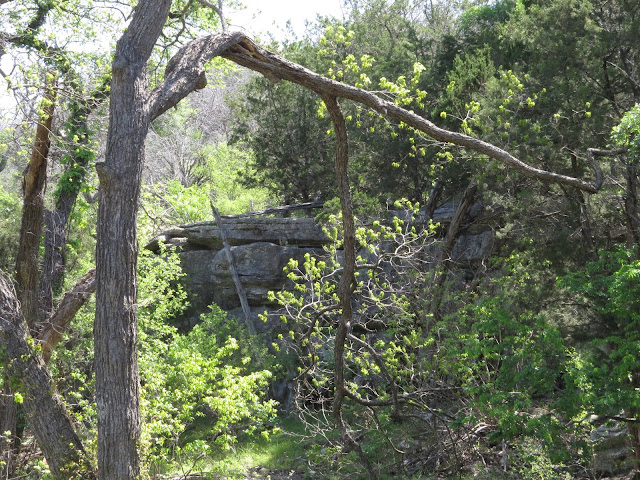 Later, as I was working my way back down the creek towards where I left the Quad-B a large bird noisily flapped its way out of the tree there in the background on the left and flew across towards that ledge just left of center. The noise initially made me think vulture, but as I briefly saw it in flight I thought Turkey?!

Turkeys don’t usually roost in the middle of the day, preferring to be on the ground foraging instead. 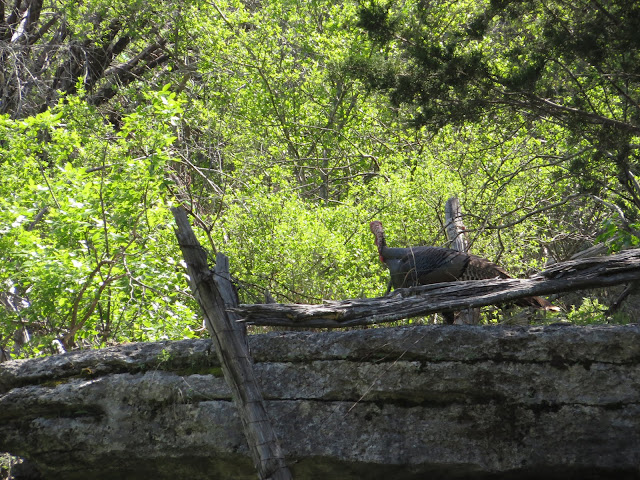 But I parked myself in an inconspicuous spot and settled in to wait for a while just to see what might happen.

Eventually, fooled into thinking he was alone again, this guy leisurely sauntered into view, though when he realized I was still there on the valley floor he did a double-take, turned, and head-bobbed back out of view as fast as his feet would move.

Not long after the turkey encounter I once again mounted up on the Quad-B and prepared to retrace my route back down the River Trail, pointed to there by the big red arrow on the right, battling up and down the various obstacles between here and and the campground, including heaving the Quad-B across that gap in the ledge over the mouth of Gorman Cave.

But  I had barely got my feet on the pedals when I was faced with my first challenge.

If you look close at the circled bit of trail, really close because the grey contour lines are kinda hard to spot, you’ll notice that that last little bit, the tail-end or the beginning, depending on which way you're going, of the River Trail is a bit steep.

In fact this is the lower end of the old Gorman Road where it switch-backed down the final plunge  off the bluffs to the river. That last drop is about equivalent to a 5 or 6 story building and now is a rutted, hard-packed chute of dirt and rock that is only vaguely related to a road; and it is really steep! (No photos because I was too busy surviving, both going up and down.)

Now here is where I broke my rule, the one that says if I would have to walk the Quad-B up then I also need to walk it down.

I don’t know why I broke my own rule. Maybe it was because I had just now got my butt on the saddle and was too lazy to get back off again, or maybe it was just because I’m a man and men do stupid crap. After all, it’s kind of our thing!

Remember the man’s prayer said at the beginning of every meeting of Red Green’s Possum Lodge? “I am a man: But I can change: If I have to: I guess” Well we have to say it every week because we actually never change. . .

Whatever the explanation for ignoring my own rule, I crept up to the edge of this downhill, grabbed for the brakes, and went over, desperately trying to pick out a line to avoid the worst of the ruts and biggest of the rocks while at the same time struggling to remember to keep my eyes open so I could look where I wanted the tires to go.

The motto of that same Possum Lodge is, ‘Quando Omni Flunkus Moritati’ – when all else fails, play dead – but there were a few times on that long slide down where I figured if I screwed up I wouldn’t have to ‘play’ dead at all!

But I made it unscathed.

You see, shortly after making it to the bottom in one piece (which I had to check a couple times before I believed it) I passed a family, mom, dad, two young children, and a terrier-sized dog, hiking the other way and I’m pretty sure they were well within earshot as I screamed the whole way down.