The Regency Bridge, Up Close and Too Personal!


The day after hiking the Spicewood Springs Trail I thought it prudent to give my bum leg a break.

Oh. Did I not mention I was hiking on a bum leg? Well that’s probably because when a guy gets injured he really wants a story to go along with it, ideally a heroic story. Well I don’t have one and frankly, that sucks!

I just woke up one day, stood up, took about three steps, and realized my leg hurt like hell. Not only do I have no idea what I did to it, I can’t even pinpoint when. Other than sleeping on it wrong, which is just - well - wrong in so many ways, the likely culprit is when I was lifting the pieces of Elmer’s porch into the trailer so it could be moved. But we didn’t take him to the airport for another couple days after that and I don’t remember being damaged goods (any more than normal anyways) at that point. And considering how much shit that leg was giving me you’d think I would remember.

Anyways, by the time I headed out to Colorado Bend State Park I was no longer falling to the ground and screaming loud enough to make dogs run for their mommies every time I tried to put weight on the leg, but it still wasn’t quite right.

So Tuesday morning I left the hiking gear stowed and saddled up The Van for some internal-combustion ambulating instead.


About 25 miles northwest of San Saba (pop 1000) is the little community of Regency (pop ~50). Actually, since the Post Office closed sometime in the 1930’s and the last store in 1971, now Regency is more like a named area, a loose collection of driveways and ranch gates, but ranches were, and still are, an important part of the economy in these parts and the nearby single-lane, wood-deck, Regency Bridge is the only crossing on a 30 mile stretch of the Colorado River.

If you’re not from Texas you’ve probably never heard of the Regency Bridge, but if you’re a Texan the Regency Bridge is semi-famous. In fact it features prominently in the opening sequence of the current episodes of the TV show Texas Country Reporter.

The first bridge here, a through-truss built closer to the river, was built in 1903 but fell down In 1924 under a herd of cattle (and a 9 year old boy). The second bridge opened in 1931, another through-truss built on the original abutments, washed away in 1936. The current bridge, a wood-decked single-lane suspension bridge 403 feet long (325 feet between the towers) and about 80 feet above the river, quite a bit higher than the original bridges, was built in 1939 for $30,000. With the exception of one gas-powered cement mixer, a winch-truck and a steam-shovel it was built by hand by workers earning 30 cents an hour, 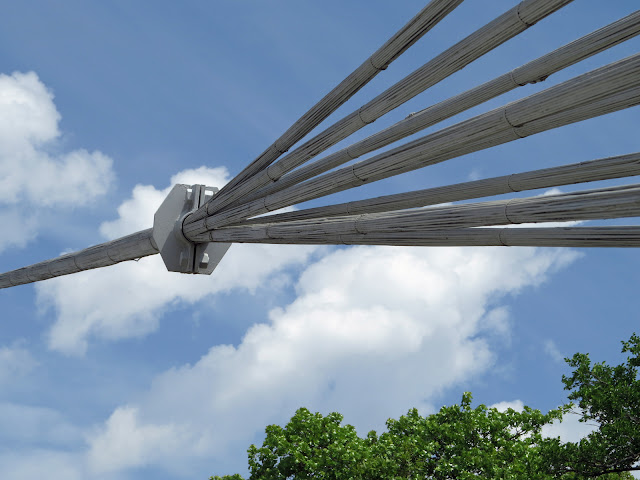 and working hard manually stringing the nearly 1000 wires that make up the main cables because there was always someone nearby that wanted one of these New-Deal jobs. 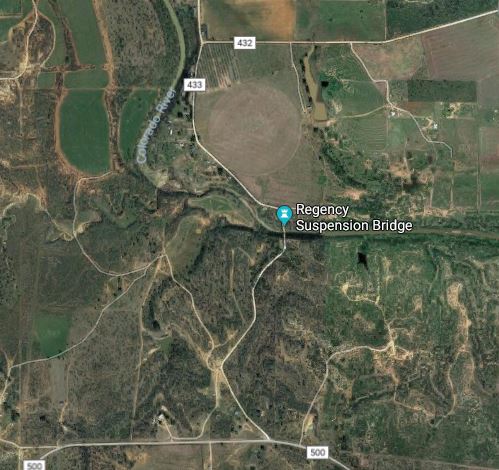 The roads have been readjusted since then and the importance of the bridge faded along with its paint. While not impossible to find nowadays you do have to work at it a little.

From the north there’s a sign for the bridge at the intersection of the paved FM-574 and the gravel CR-433. The bridge is about 4.5 miles to the south.

From the south, just north of San Saba at the intersection of SR-16 and FM-500 (Both paved) there's a sign for the Regency Bridge pointing north down FM-500. But the bridge is not on FM-500. To get there you have to turn off of FM-500 onto CR-137 (gravel).  There is a sign marking the county road, but no sign for the bridge. And most maps don’t identify CR-137 at all, including Google Maps which shows the road but doesn’t properly identify it.

Google Maps would trick you into looking for CR-433, which is identified there on the north side of the river, but the river is also the dividing-line between Mills and San Saba counties, which also changes the name of the road.

Once you find CR-137 it’s not quite a mile to the bridge, but this is a narrow and sometimes steep road so if it’s been raining hard, which is not unknown around here, you might want to walk it first before you get stopped by a wash-out and have to try to retreat, up-hill and backwards.

Both CR-433 and CR-137 are narrow with no shoulders, therefore no place to pull off. The exception is a wide-spot in the road, a sort of pull-out, on the south end of the bridge that will accommodate 2 or 3 cars, but this is not a place you want to be trying to get to with a motor-coach or travel trailer.

There are two private driveways near the north end of the bridge but do not park in them!  It pisses off the landowners. 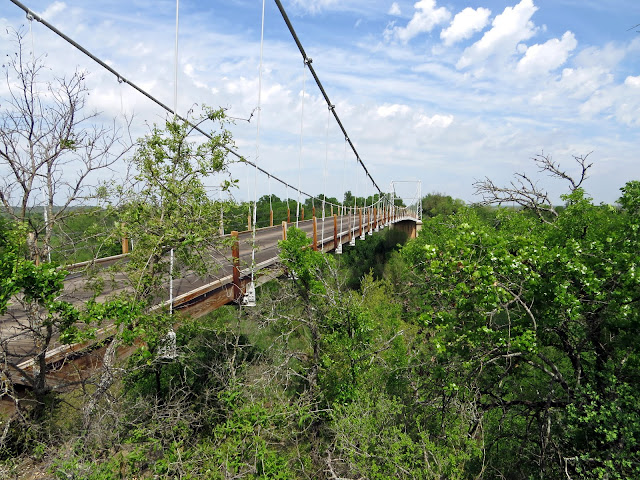 The bridge is surrounded by private property, which is why this is the best I could do for a side-shot of it. 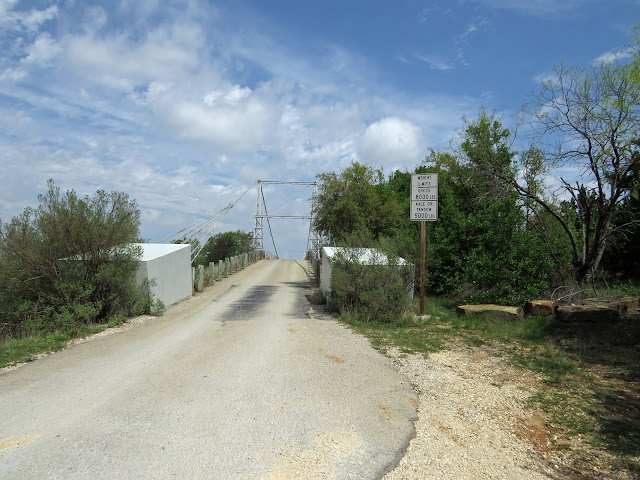 So did I drive The Van across this bridge?

As you can see, from one end you cannot see the other. The way you tell if there’s a car coming across at you is to watch the cables which will dip and sway as the bridge ripples under the weight of a vehicle. If no dipping or swaying feel free to drive on out there, but only if your gross weight is less than 8000 pounds.

Since The Van comes in right at 8000 pounds, or at least did many years ago when I trailered a load of scrap metal over the scales at a recycler, I decided to err on the side of conservancy and stay off the damn thing! 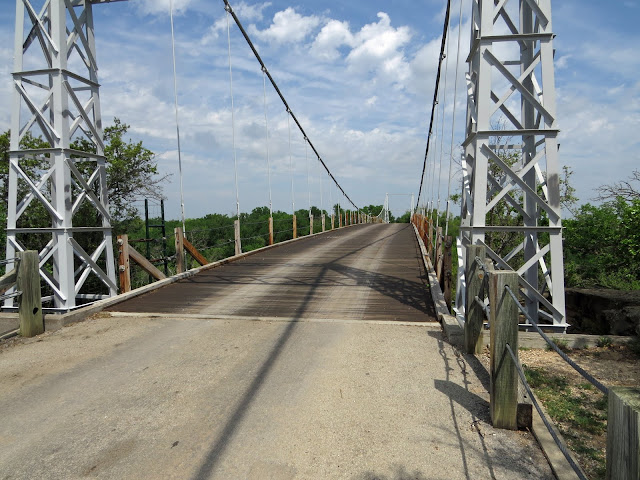 OK, you’re right, that’s just an excuse. Truth is I'm pretty sure The Van comes in more like 7500 pounds with me in it, but the thought of driving out there in The Van scared the crap out of me.

I know that as a member of the male subspecies I’m not supposed to admit things like that, but it is what it is. Hell, just walking out there with nothing more than the weight of my camera and hat scared me bad enough! 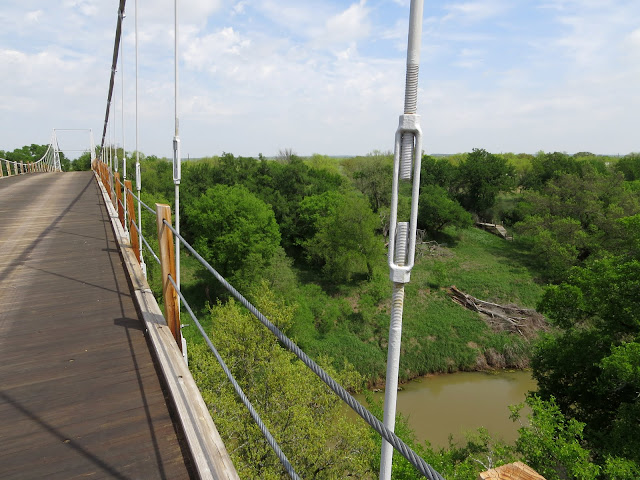 But in order to reclaim some tiny little remnant of my male dignity, sidle on out there one half-step at a time I did. 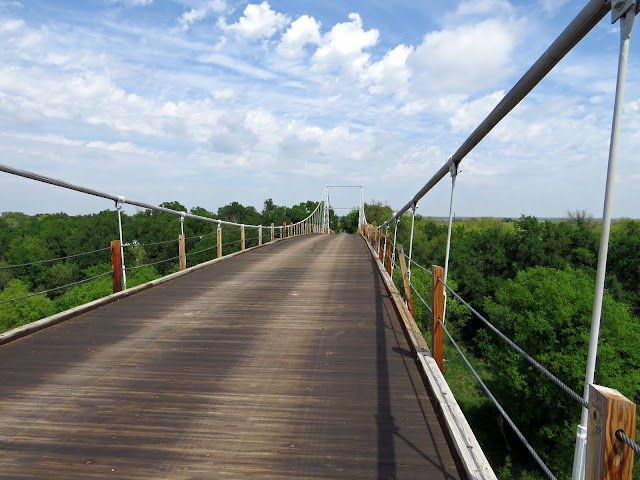 Of course the sight of one of the wooden supports holding up the guard rail, such as it was, dangling out there in mid-air like that didn’t help quell the fear-factor. 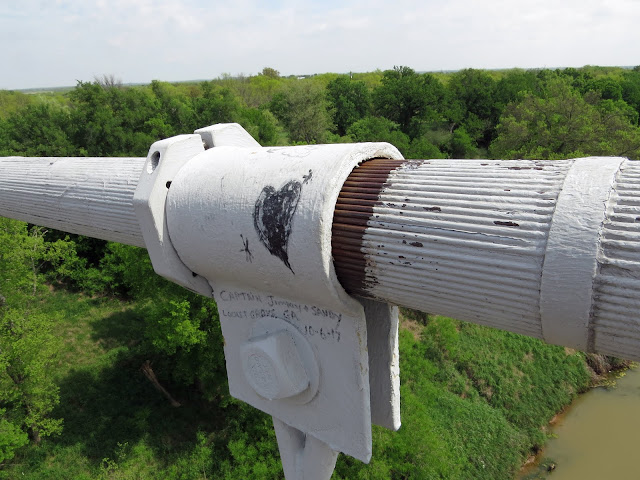 Nor did discovering that this saddle, you know the one holding up one of the iron rods that's supposed to be holding up the deck I’m currently standing on, has slipped a couple of inches down the cable since the last maintenance. 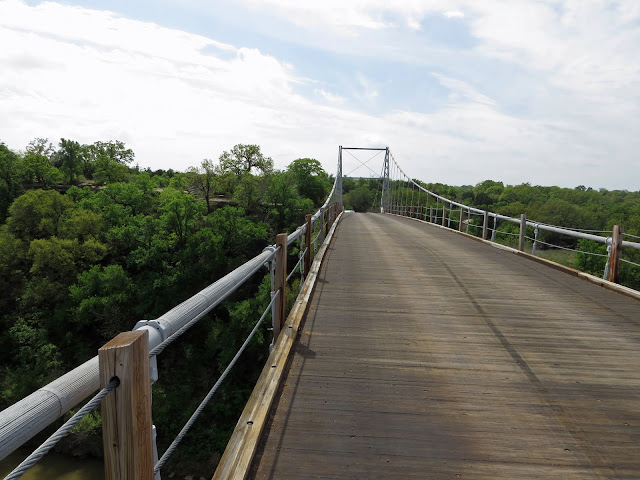 I tried moving over to the west rail and ignoring the major defects over there along the east rail, 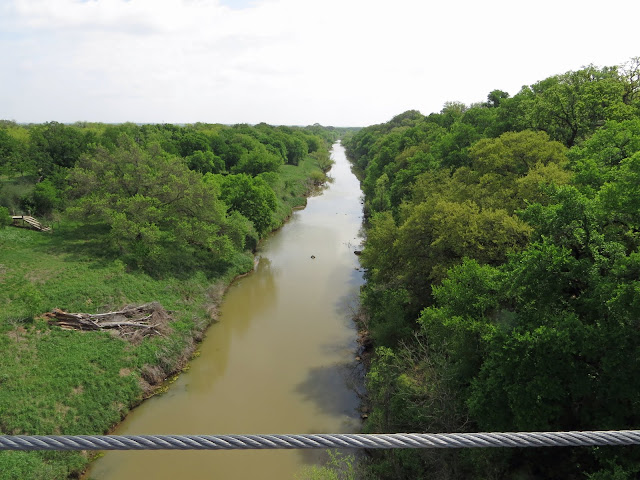 but you know what? It’s still pretty damn high up here and you can’t see it in the photos, but the wind is brisk (OK more like a gentle breeze) and there’s definitely some swaying going on! 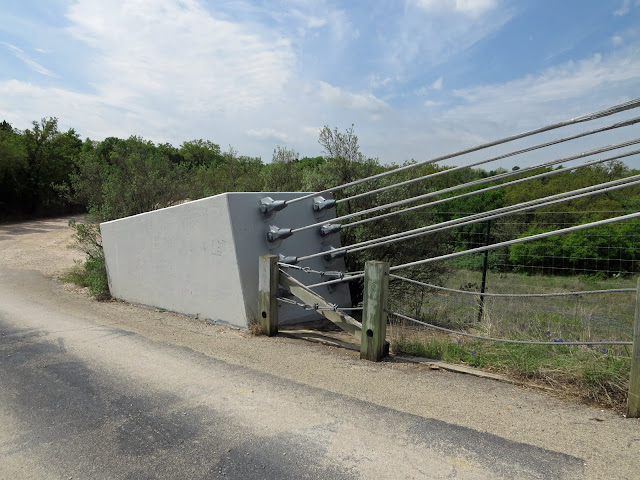 But wait! Between wind-gusts can I actually hear those cables creaking?!