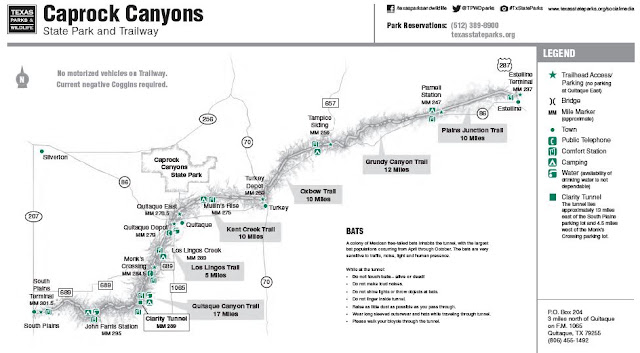 One of the attractions of Caprock Canyons State Park, one of a couple of things that has me returning to this state park rather than the similar, better known, and reasonably close (About 85 road miles) Palo Duro Canyon State Park, is the proximity of the Caprock Canyons Trailway.

A 64 mile stretch of the former Fort Worth and Denver South Plains Railway now turned into a rails-to-trails route administered by the Texas Parks and Wildlife Department.

And my favorite (and also longest) segment of this trailway is the climb from the Monk's Crossing trailhead down on the rolling plains at the bottom of an escarpment, then up to South Plains which is up on the high plains a couple of miles beyond the top of the escarpment.

So the morning of my first full day at Caprock finds me pulling into the large, but always empty, at least when I've been there, parking area at Monk's Crossing.

After filling out the paperwork at the self-pay station (With a Texas Parks Pass there is no actual pay but the paperwork needs to be taken care of anyway) and sticking the cover-sheet in the windshield as proof that I have done so, 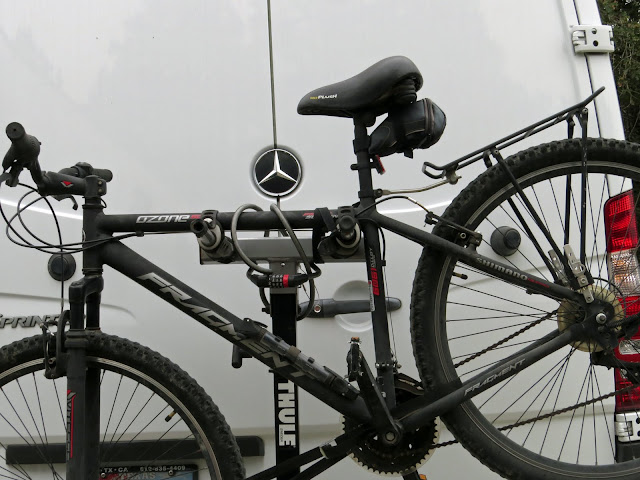 it was time to take the Quad-B (Big-Box-Beater-Bike) down off the rack, load her up with water, snacks, camera, and of course me, and take off.

So where does the Idiot part come in?

Well - the last time I even thought about throwing a leg over the Quad-B was way back on Memorial day weekend when I rode a few bits of the Tunnel Hill Trail in southern Illinois. Between then and now the Quad-B has been moldering in the barn with the air slowly seeping out of the tires while my time in the saddle has amounted to a big fat zero.

And here I was, with no pre-conditioning whatsoever, setting off on a 30 mile ride on a cheap bike that doesn't fit me well at all.

And it's not like there's spots to bail out if I find I've bitten off  too much. This is an isolated trail and the only way out is at either end.

And yes, I know, the map says this trail segment is 17 miles which is a 34 mile ride out and back, if my math is right, but the last time I rode this trail I learned that that last 2 miles into the virtually non-existent town of South Plains (A couple of worn-down houses and a single, unattended self-serve fuel pump.) was not at all worth the beating, (for some reason when the rails were pulled up on that final few miles into South Plains the ties were left in place making for an unpleasant riding experience!) so my plan is to turn around once I've made it all the way up the escarpment and onto the high plains, which is at about the 15 mile mark. 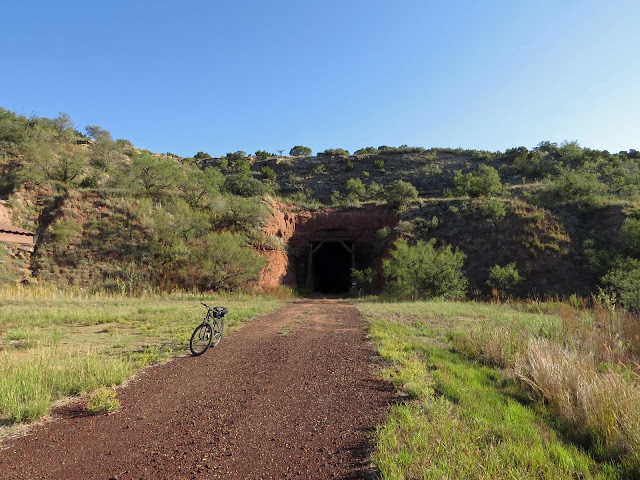 In the interest of not repeating myself, I'm not going to go into old details about the trail in this post. If you want more follow this link to an earlier post, which also includes a link to an even earlier post with additional info. 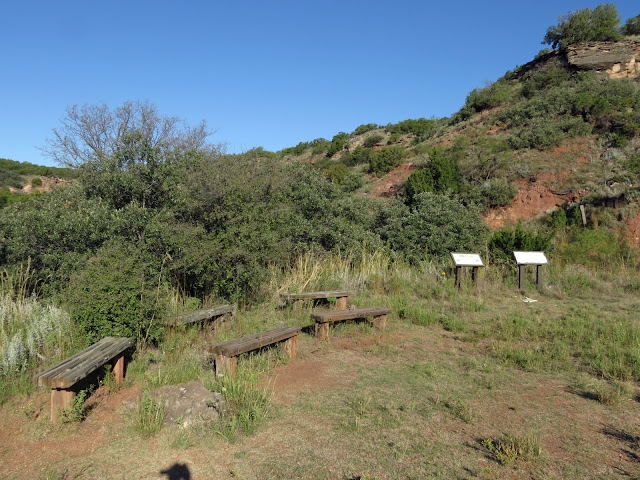 What if you build it and no one comes??

This miniature amphitheater is located on the uphill side of Clarity Tunnel where I imagine that a Park employee would give talks about, among other things, the bats that now seasonally live in the tunnel. But, like the watering stations along the trail that have been bone-dry for at least 4 years now, this venue also looks abandoned, and of the two info-plaques in the background, the one on the left is faded into near oblivion, and the other one is just blank.

Which brings up another abandonment point. There are a few pit-toilets along the trailway but bring your own Sears catalog, or toilet paper if you prefer.

Abandonment of amenities is the inevitable consequence of shrinking budgets, but that is, I think, in large part a result of flagging interest in nature over the ubiquitous electronic screen. After all, who wants to look at rocks and trees and listen to birds and the wind when you can be stalking former classmates on Facebook or wielding your blood-soaked sword in horrific battles from which you magically come back to screaming life over and over again?

Over the last 4 years I have now spent most of three separate days on this bit of trail and not once have I seen anyone else out there. Not that I'm complaining about having the place to myself mind you, but if we aren't going to use places like this how can we expect funds to be spent to create and maintain them?? 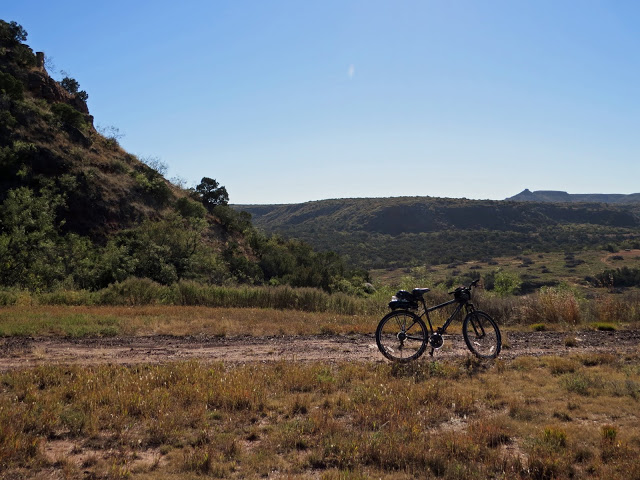 This photo was taken in 2016 from almost the same spot 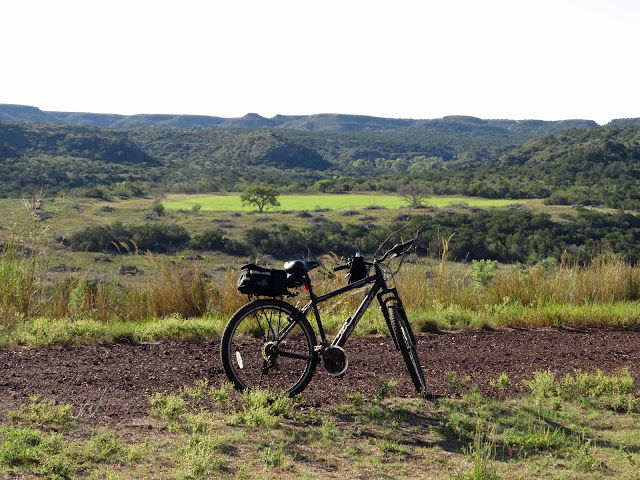 as this photo taken this month. (See the flat-topped mesa on the horizon above and to the right of the Quad-B in the previous photo, the right edge of which is showing on the far left of this photo.)

I'm not sure what went on in between these two shots, but it sure does look like a big-ass putting green has been plopped down out there in the middle of nowhere. 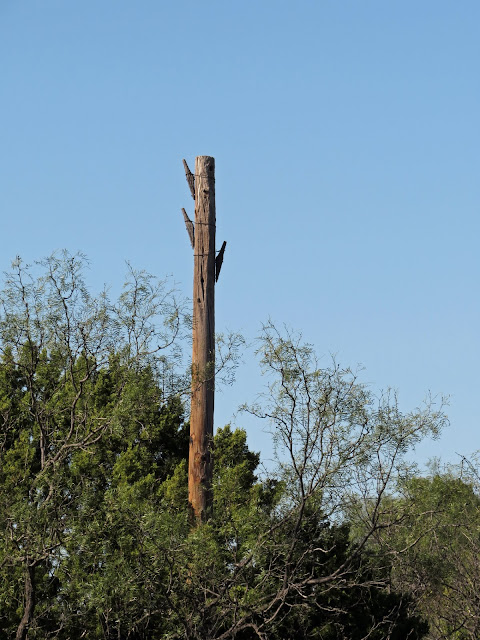 This lonely pole, out there between Clarity Tunnel and the John Ferris Station used to be a very important part of the communications link that helped fuel and facilitate commerce out here in the plains. 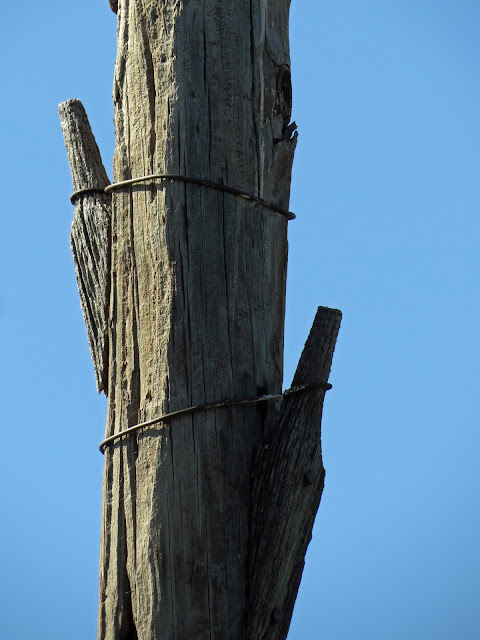 Back in the day hollow-bottomed glass insulators would be slipped over the tapered pegs to carry the wires that formed the information highway of the day. It's possible that this pole was fashioned and set in place by calloused hands 5 generations ago now, (the railroad was built in the 1920's) and though abandoned and neglected since at least 1989 when the railroad called it quits, it still stands, ready to do the job it was designed for. 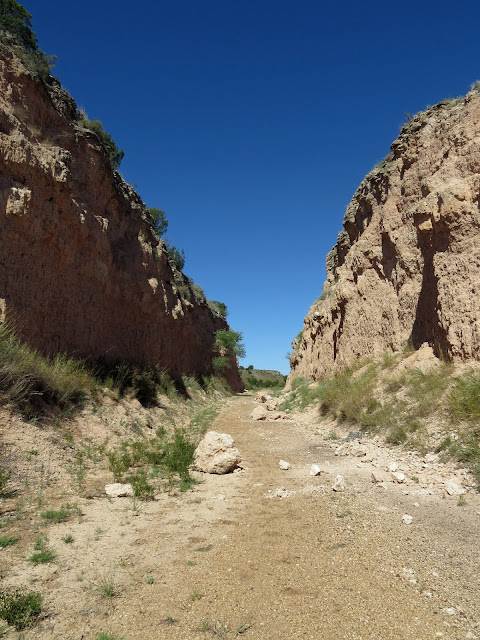 After heaving myself up that fifteenth mile to the high plains I find a spot under the last bridge to shelter from the incessant wind (Hence the preponderance of wind-farms up here.) and eat lunch while trying to physic myself up for the return trip.

Lunch finished and the day rolling on, I swing my creaking body back onto the Quad-B, while desperately trying to ignore the fact that I am only at the halfway point of today's ride, and groan my way into those first of thousands of butt-grinding pedal-stomps back towards The Van.

When I get back to this cut on the return trip I can't remember if that rock, the size of a stove, was laying there on the way up or maybe fell down after I passed, and frankly I don't care. I don't even much care if another one falls down now and squishes me like a bug.

All I know for sure is that this cut is about a mile above Clarity Tunnel which means I'm still some 5 or 6 miles from the succor of The Van and my legs ache, my butt hurts, I can't feel my hands anymore - and so, yeah, I'm officially an Idiot!