Is It Better To Shout, Or Whisper? 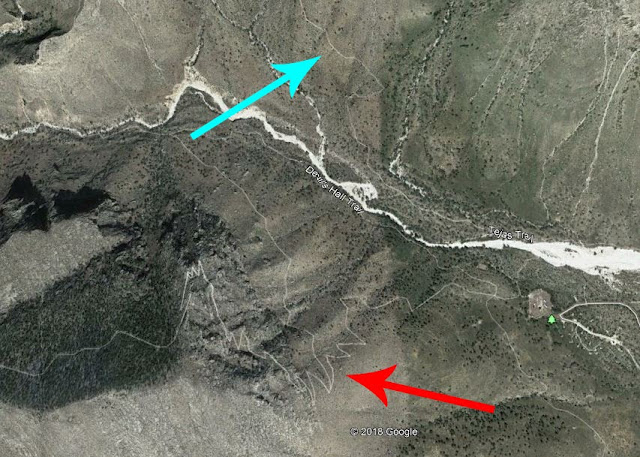 It's Saturday of a holiday weekend (Veterans Day) at Guadalupe Mountains National Park.

The tiny little lime-green tree in the lower right quadrant of the image above is the campground and trailhead. Currently a very active trailhead.

I'm standing on the Tejas Trail, at about where the blue arrow is pointing, looking south across Pine Valley with the Delaware River, or at least its braided wash, gleaming bright several hundred feet below.

What I'm looking at over there where the red arrow is pointing on the other side of the valley are the initial switchbacks of the Guadalupe Peak Trail.

These are about three-quarters of a mile away as the crow flies, yet I can easily hear the groups of hikers chattering away over there as they are stepping on each other's heels. (Bagging the Peak is apparently a big deal and, by far, draws the greater percentage of the crowd, while I'm out here on the Tejas Trail all by myself.)

Since when did chattering become an Olympic level sport with the loudest auditorialist taking the gold? I'm reminded of the hallway of a large high-school seconds after the final bell sounds on a Friday.

Thankfully the chatter of the hoards only lasts as long as the breath, and the mountain sucks that out of most pretty quick.


But not only do I have to listen to these people desecrating this natural place with their yammering, (Yeah, yeah, I exhibit signs of anti-social tendencies. So sue me! Though I probably won't show up in court because it's too crowded. . .) I can't help but also see many of them over there. Little moving spots of visual pollution.

At the 24 mm focal length I shot this image the camera doesn't quite see as well as my eye (The human eye is roughly equivalent to a 50 mm focal length) and the hikers don't show in the image as well as I can see them, so I added the arrows to point out a few.

The red arrows are pointing to three different hikers on the switchbacks that have chosen to visually shout by wearing loud, disruptive, and highly unnatural colors


and the blue arrow is pointing to a pair of hikers that would rather whisper in a more muted fashion.

This image, taken from the same spot at a 1200 mm focal length, shows one of the visually shouting hikers in more detail. Not only is he/she wearing a construction-equipment-orange pack, but has a just as obnoxiously loud jacket hanging off that pack.

Some will disagree with me, in fact there was recently a brief discussion among some of the bloggers I follow about the advisability of making sure you are visible while hiking in case you need rescuing, but my personal opinion is that hikers should respect the area they are traversing, as well as any other hikers that might also be out there to enjoy that same space, by remaining quiet and largely unseen.

I personally hike in earth-colored clothing. I even take a black marker to the neon-orange bits of my survival knife. My current pack is Realtree(TM) camouflage because the other choices at the time I bought it were too loud. Even my poncho is a muted forest green so that when I wear it, which isn't often, I'm not shouting.

True, as well as allowing me to blend in with my surroundings, those choices would make me pretty difficult to spot if I got into trouble.

Well my first line of defense there is to use my experience and common sense to stay the hell out of trouble!

But shit happens. Or at least could happen.

For the eventuality that I can't self-rescue I carry a nearly weightless emergency blanket that is not only many times larger than any pack or jacket I might have, but is also an eye-lasering orange on one side and shinny, reflective silver on the other.

Of course if I manage to kill myself by falling off a cliff I'm probably not going to be able to dig out my medical kit, extract the mylar  blanket, rip the packaging away. and unfurl it on the way down so my body can be located after the fact, but then again, in that event I wouldn't mind just being left to nature anyway.

Just my 2 cents, which, given inflation is probably worth only about a quarter-penny now.

Now on with the rest of the hike!  (next post that is.)