Hiking Echo Canyon in the Chiricahuas

For my second hike of the day in Chiricahua National Monument (OK, I'll admit that first "hike" barely qualified as such, but I did put one foot in front of the other for about a mile so I'm counting it anyway.) I picked the Echo Canyon Loop because it sounds cool. As does the Natural Bridge Trail, and the Heart of Rocks Trail, and the - - Nope, nope. I've made my choice, I need to stick with it.

The Echo Canyon Loop consists of linking three trails together, plus, in my case, the spur up to Massai Point at both ends of the hike, though a smart person could avoid that last little bit if they parked at the Echo Canyon trailhead instead. 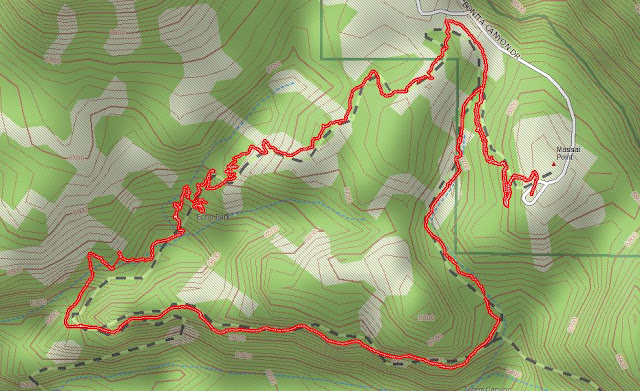 The trail guide, that can be picked up at the visitor center, calls this a 3.3 mile hike, but once again I somehow made it longer than that and by the time I got back to The Van it was more like a 4.4 mile hike.

From Massai Point this hike had me dropping about 600 feet of elevation (Which would have only been 500 feet if I left from the Echo Canyon trailhead) which I then had to recover again. (Although there is another option that I will get to in a later post.)

By hiking this loop counterclockwise I faced the steepest parts of the trail, which really aren't all that bad, on the downhill trek and the uphill return was a more gradual, steady pull because it was spread over a longer distance.

Time to get hiking! 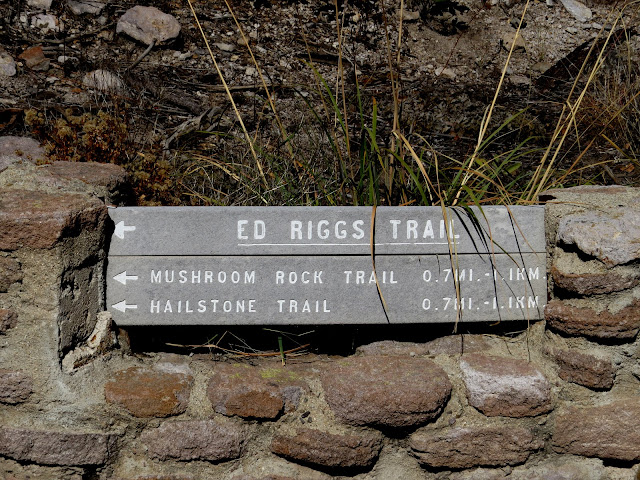 I ran into an intersection and this trail marker.


I was going to be hiking the Hailstone Trail, but not until on the way back, and the Mushroom Rock Trail would have to wait for another trip, so I ignored all those tempting arrows and went right instead. 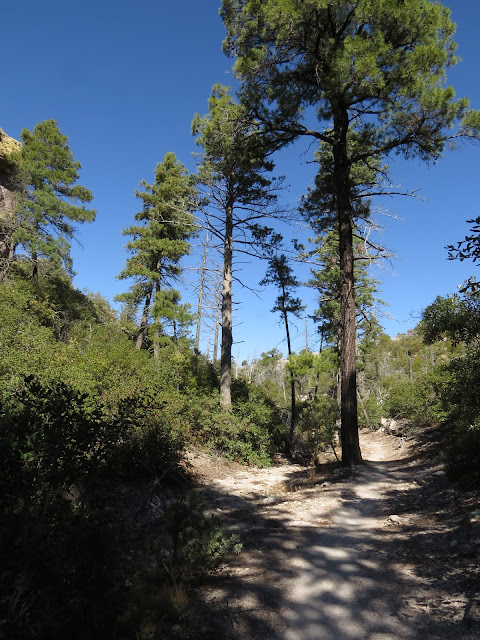 As you can see, it turned out to be a beautiful, if crisp, day for hiking. 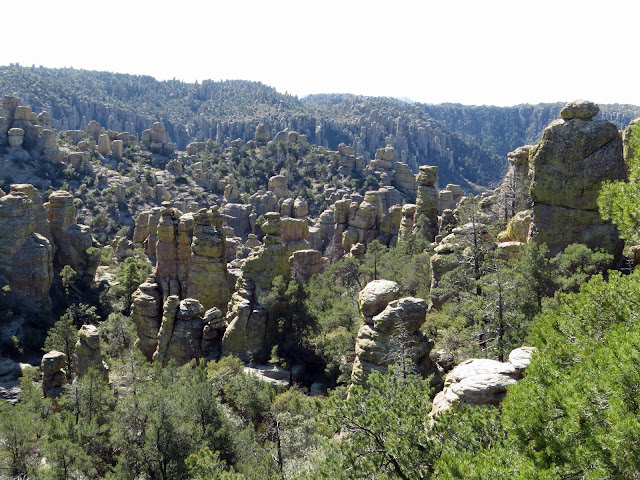 The geology here makes for some interesting formations such as Mushroom Rock, Big Balanced Rock, and Duck on a Rock. (I'm sensing a rock theme here. . .) 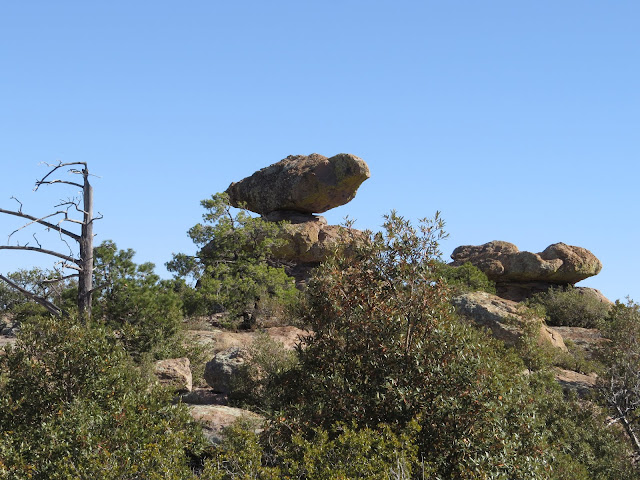 I'm sure this one has an official name too but I don't know what it is so I call it hungry Chickadee because it looks like the one of Chickadees impatiently waiting for me to finish refilling the feeder, 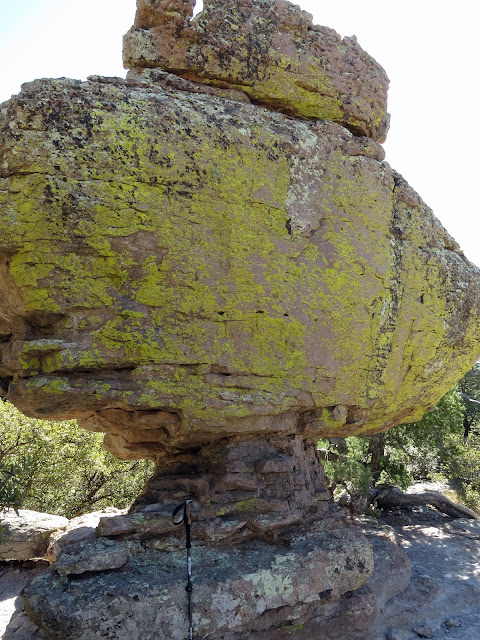 and I call this one Don't Sit Under That Rock! 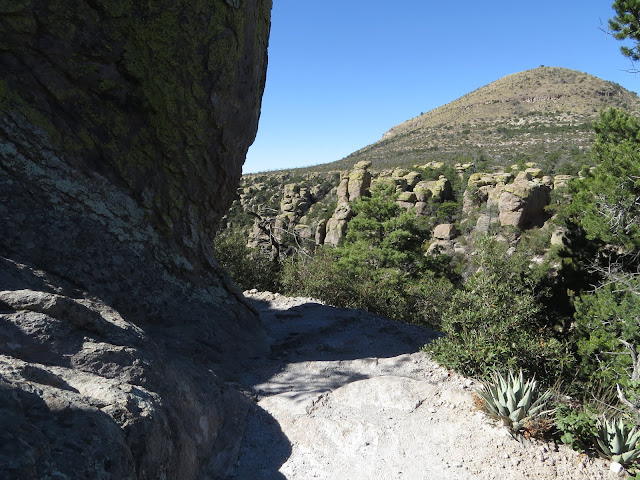 That's Sugarloaf Mountain out there on the right. It stands another 400 feet higher than Massai Point 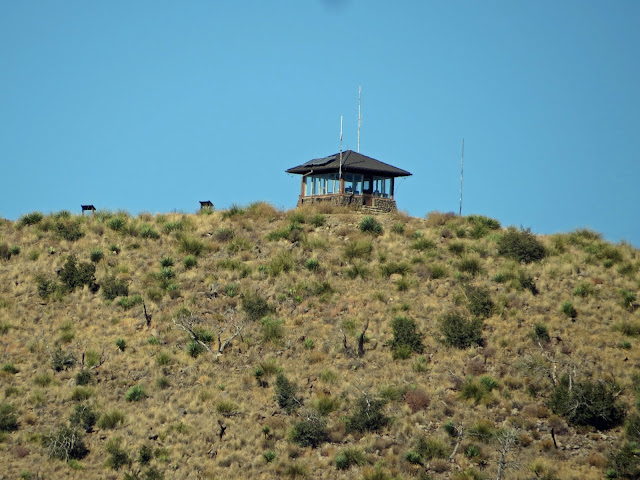 and has a CCC built lookout on top that is used for monitoring lightning strikes for lingering smoke during the summer.

And yes, there is a trail up Sugarloaf but that's also a hike for another trip. 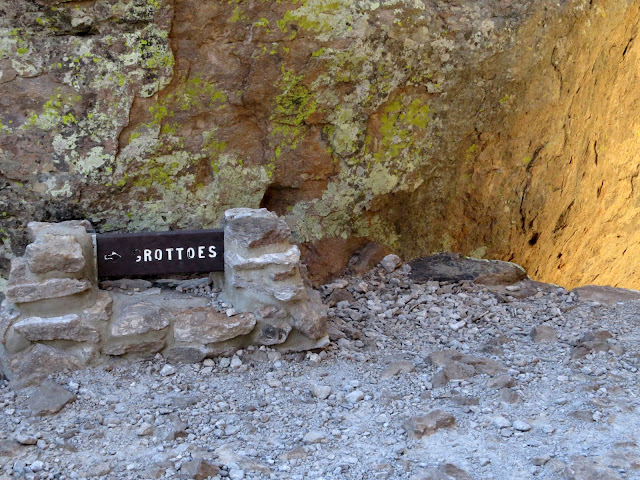 I managed to arrive there just in time to catch a nice warm glow coming through the cave-like passage on the right, 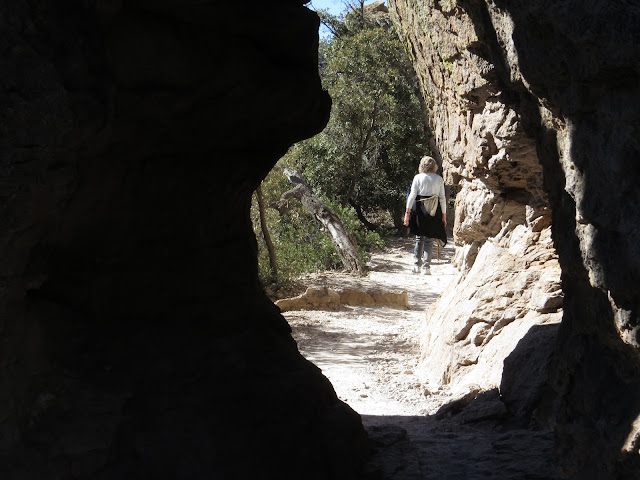 but I also caught up to 5 or 6 people of my age or slightly more also poking around the Grotto.

If you have some physical/stamina limitations the Grottoes could still be an attainable destination. The hike here and back isn't all that long and the Grottoes are at about the same elevation as the Echo Canyon trailhead with only a mild hump in between.

Unfortunately those people that I caught up with were scrambling and lounging around the nooks and crannies of the Grotto for what seemed like forever, preventing me from getting any decent shots of it without looking like some snooping pervert, so I guess you'll just have to go see for yourself.

Fortunately, even though it was still relatively early with plenty of daylight left for hiking, every one of those 5 or 6 must have chosen the Grotto as their destination and turned around instead of following me on down the trail, because I never encountered them again. 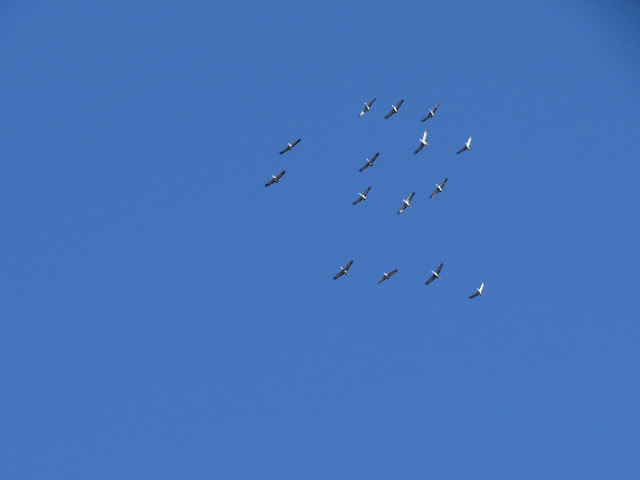 It's that time of year (This was mid November) and I heard these migrating cranes long before I finally managed to spot them flying at well over 10,000 feet. 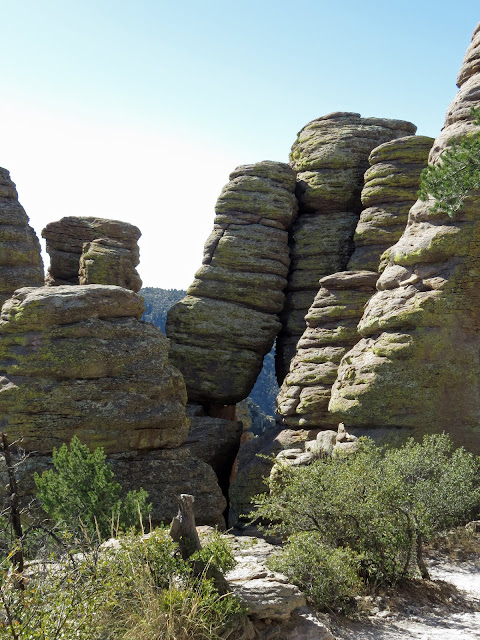 But my main focus was more terrestrial.

I call this Child After a Long Day at the Zoo,

which sounds better than Lazy Bastard, which was my first thought. 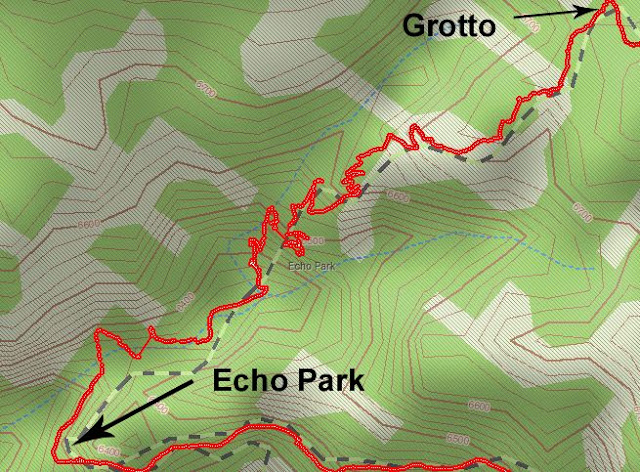 And the hiking did require some terrestrial focus because a little while after leaving the Grotto behind the trail got steep-ish. Let's see, there's 1,2,3,4 - oh hell, a lot of switchbacks, many of them short and tight, 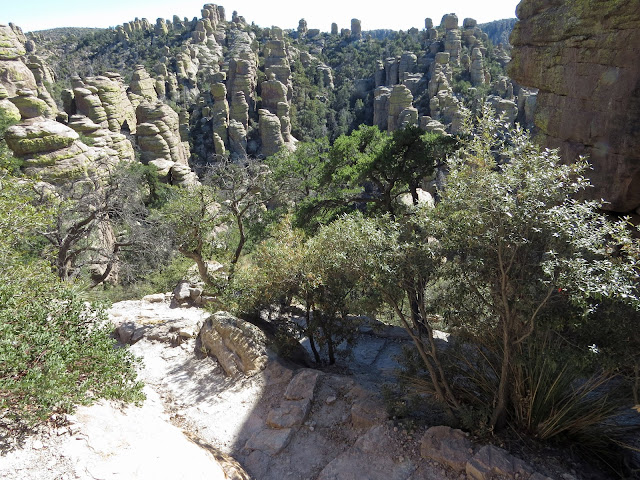 to get down through the terrain here. 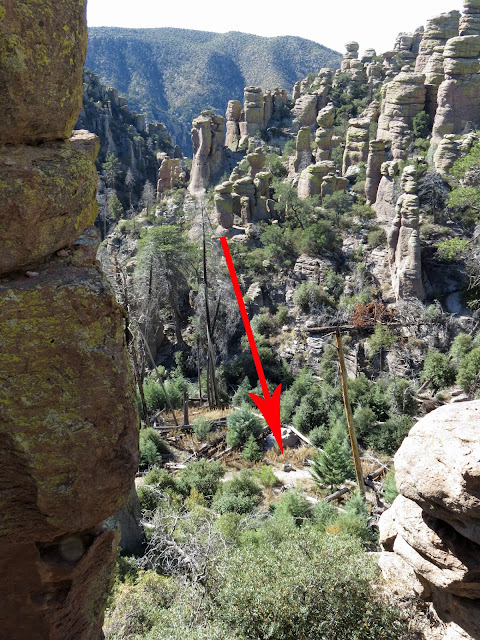 At one point I could see the official spot of this trail's namesake down there, 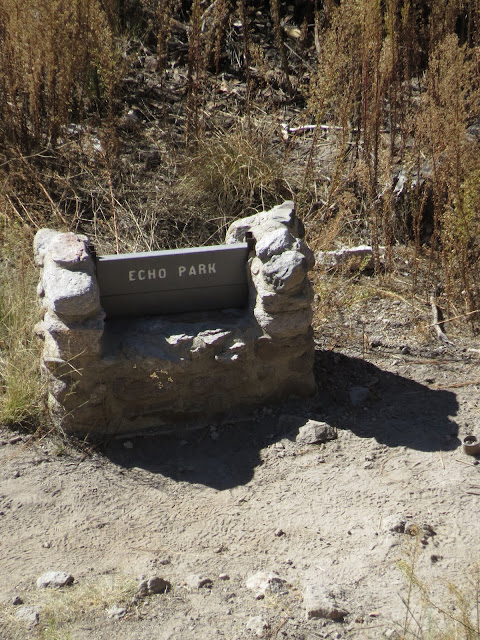 but before I could get there 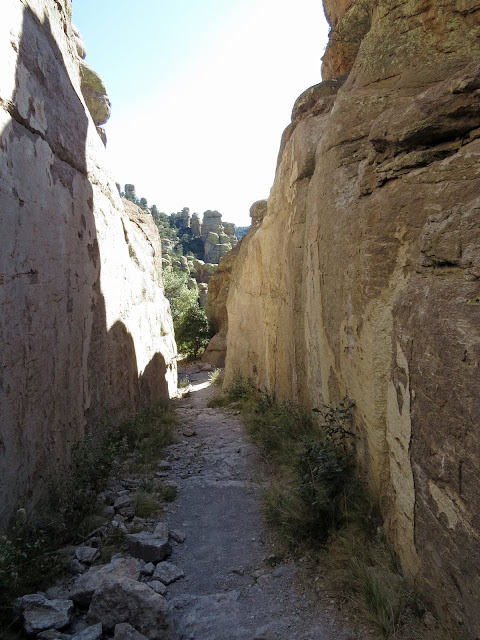 I first had to get through 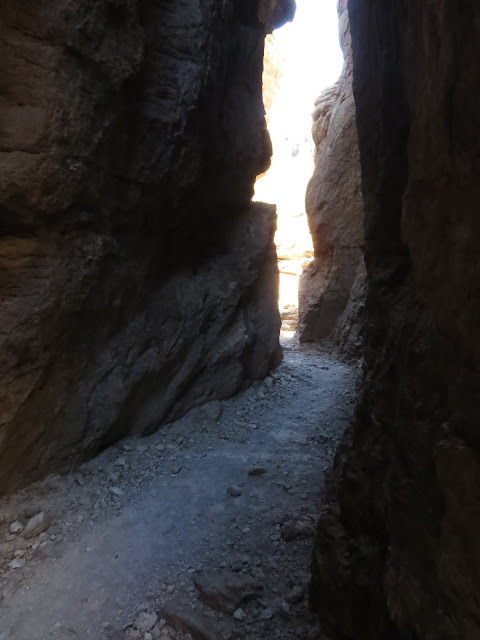 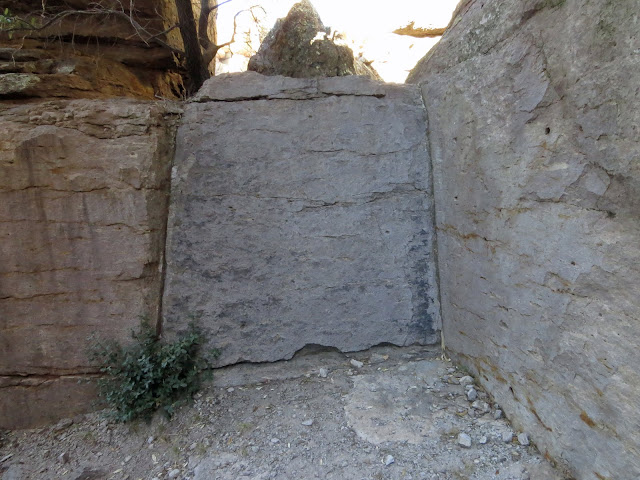 I tried pressing in a few strategic places while uttering magic words, but wasn't able to open this very-well fitted door.  So I'm still wondering what's behind it. . .

(Should have put one of my hiking sticks out there for scale, but this thing stood well over my head.) 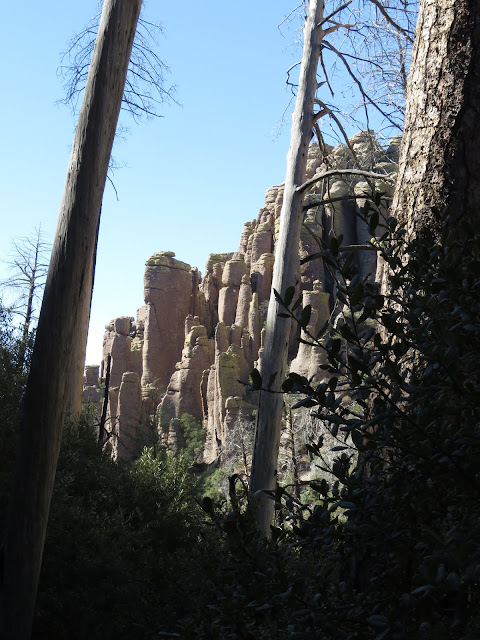 Because of the rugged and corrugated nature of the canyon walls there wasn't really much in the way of echoing going on down in Echo Park, especially for an introvert who is pathologically adverse to making loud noises, 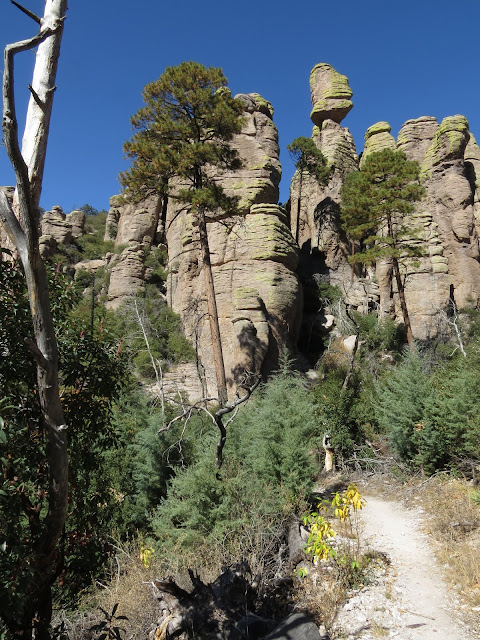 but I didn't mind in the least. 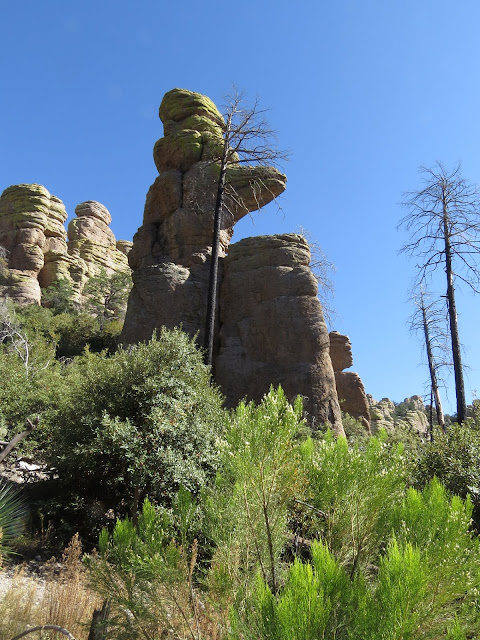 I had the place to myself except for this alligator wearing a silly Marge Simpson hairdo and banging, silently, on a big bongo drum.


Nice place for a lunch-break! 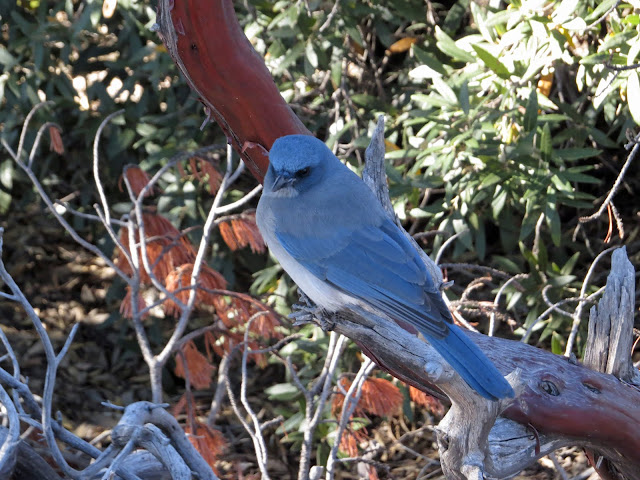 Which seemed to draw out a few 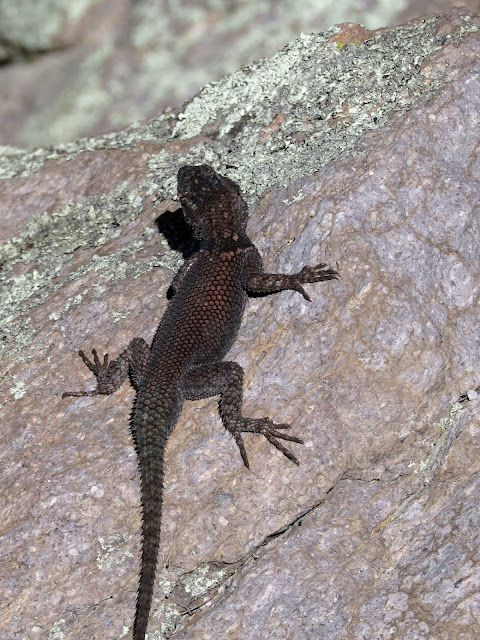 of the local residents. 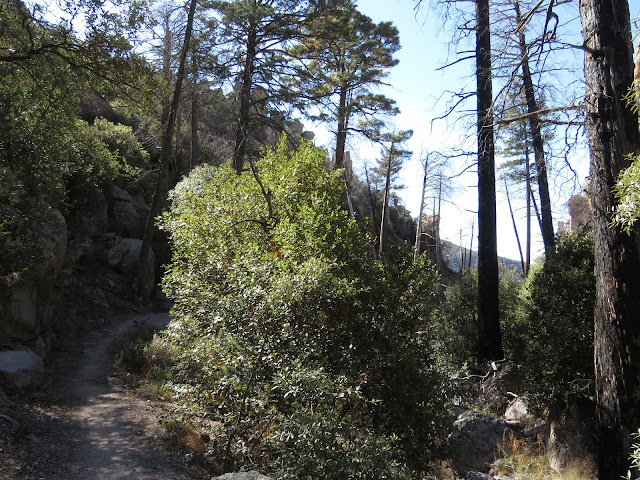 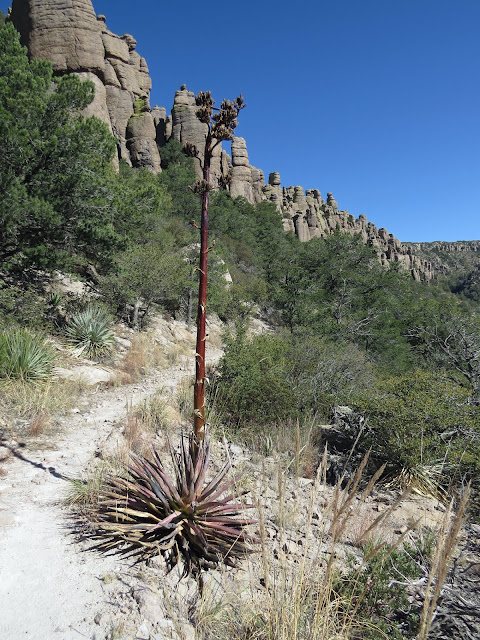 which, in contrast to the trip down here, is a steady and more gradual climb 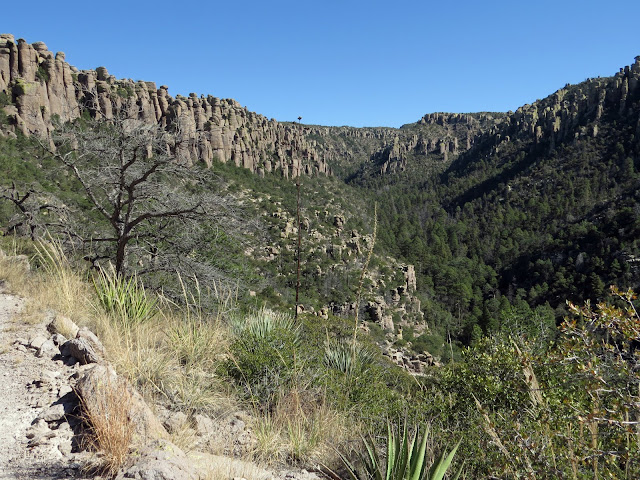 back towards the heights that I came from. 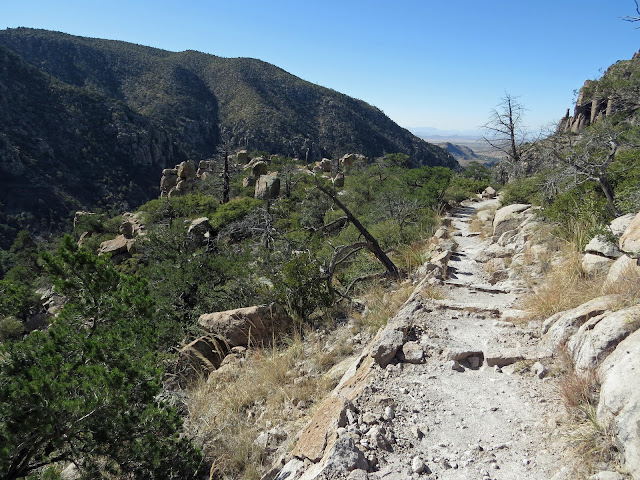 Turning around and looking west towards the visitor center, I could see all the way across Sulphur Springs Valley to a little piece of the Dragoon Mountains some 40 miles away, the scope of the view narrowed and focused by the canyon.

I'd be over there in the Dragoons soon enough, but for now there's more of Chiricahua to see. Though campsite availability is putting a serious crimp in how much time I have to see it.