The first time I wrote this particular post it came out as - well, what most might be inclined to call a vicious rant.  Probably because as I was writing it (mid December 2019) a volunteer search and rescue team member had just died on California's Mount Baldy while trying to find a missing hiker. A hiker that had made a personal choice to continue on as the rest of the group he was with turned back because of what they deemed to be life-threatening winter conditions. I have little tolerance for unthinking stupidity, and and even less when that stupidity costs others.

But after sleeping on it I decided I should tone the post down a little, so here's the gentler, more refined version.

What triggered this post wasn't that incident in California, (That hiker went missing Dec 8, on Dec 15 the search was called off, and as of right now he is still missing) but instead it was instigated on a more personal basis in mid November (2019) by a lone hiker coming down the Hailstone Trail towards me as I was working on the second half of the Echo Canyon Loop hike in the Chiricahua National Monument. 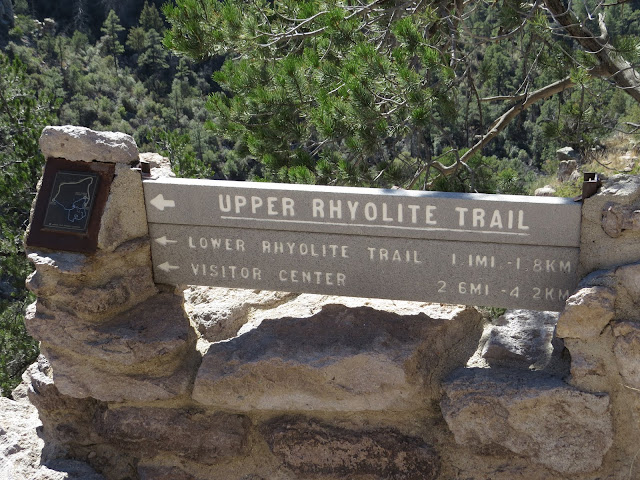 As she approached, instead of the usual walk-by "how's it going", she stopped me and asked if this was the way to the parking-lot.

Well it was, sort of.

But somehow, even though it was afternoon by now which made the timing right, she didn't strike me as the hardcore type of hiker that would have come up from the visitor center on foot, made the Big Loop, and would be heading back down towards the car about now.

Maybe it was the flimsy, brightly-colored cloth pack that looked like she bought in the toy department at Dollar General, or the fact that she was wearing ankle-socks and light-weight tennis shoes not really up to the rigors of this rocky, desert landscape. Regardless of what it was, I didn't take her for a serious hiker. 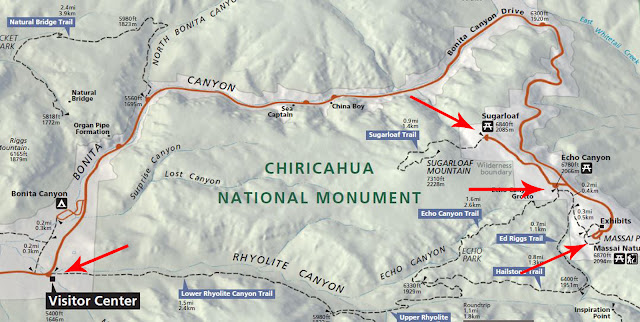 Not counting the lay-by for the Natural Bridge Trail which is only large enough for 2, maybe 3, vehicles, there are 4 different trailhead parking-lots spread out between the visitor center and the top of the mountain, so I asked her which parking-lot she was trying to get to.

Turns out she didn't know. . . (OK, first she asked if she was going the right way, and now it turns out she doesn't even know where she's trying to get to!  Not a good sign. . .)

After some discussion over the paper map, given out for free at the Visitor Center, that I pulled out of the the thigh pocket of my cargo pants we determined that she had parked at Echo Canyon, which meant she was currently going the wrong way.


During that discussion she admitted that maybe she shouldn't have left her map in the car!!!

I'm pretty proud of myself that I had enough self-control to tamp down that impulse to reach out and give her a dope-slap up-side the head!

Then again, it's not my first trail-encounter with the stupid, the irresponsible, the self-centered, and the just plain clue-less, and based on the evidence, it won't be the last.

In this case it happened to be a woman, but over the years I've encountered roughly an equal number of female and male solo hikers out on the trails and I have to say, of those that were in over their head, the men are leading the count. 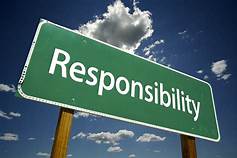 Solo hiking carries a level of risk with it, and there is a covenant, albeit a clearly all too often unspoken covenant, between those that choose to take on that risk and society in general. A covenant, implied or otherwise, that dictates they will hike responsibly.

That they won't unduly depend on, or otherwise burden, that society over a choice they made of their own free will.

Clearly hiking an unfamiliar area without something so basic as a map is an egregious breach of that covenant!

Not to mention that it's just plain stupid.

Unfortunately this is not the first time I've encountered lost and map-less hikers. 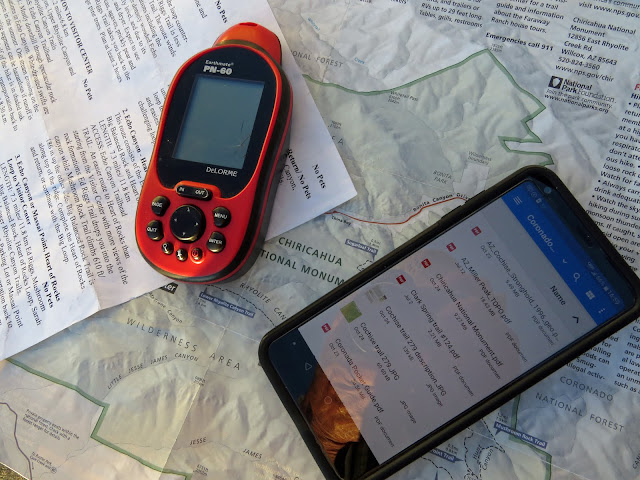 Go ahead and call me overly cautious if you want to, because after hundreds of successful (Well, mostly successful but of those few that weren't I managed to extract myself without outside help, so I guess that kinda makes them successful too.) solo hikes over decades I'm fine with that label, but at a minimum, in addition to the paper map that's always in the thigh pocket of my cargo pants, I hike with a GPS (which obviously has a map on it) set to tracking mode so I not only know where I am but also have the track of how I got here, as well.

If I can't get my hands on a paper map I have been known to photograph maps at trailheads with both phone and camera (Never depend entirely on a single bit of electronics! Sometimes that shit breaks!) or even to hand-draw a map of my own.

As I said, that's a minimum.

Today, though she is carrying no map whatsoever, I have a paper map as well as a trail guide in my pocket, the GPS clipped to my pack with spare batteries ready, and an electronic copy of the paper map as well as the two relevant USGS Topo maps downloaded onto my phone. (By having at least two electronic devices, GPS and phone, I greatly increase the likely hood that at least one of them will be working and paper maps don't break, just as long as I don't set fire to the thing or accidentally eat it.)

By the way, all the maps, paper and electronic were free, (Of course I had to buy my GPS) so I don't think there's any excuse for not having them, but a web-search on "missing hikers 2019" turns up a distressing number of hits.

Because of limited District Office hours and funds, it can be difficult to get paper maps for trails in National Forests, so while I have a decent internet connection I go to the Interactive Visitor Map,
zoom in on the area of interest, and screen-grab sections of the map to put onto my phone as a PDFs. Now they are available even when there is no cell service, which I find is still the norm in the National Forests and not the exception.

Note that this particular Visitor Map only covers National Forests and does not include other National facilities such as Parks and Monuments. For those maps I go to the particular facility's web site.

There is a similar map for BLM lands called the BLM Recreation Web Map but it is painfully slow and has limited information. There are clickable points, some of which will include a web-link to a specific area, but it takes patience for these clickable points to load into the map. (If the resulting popup says 1 of (several) the link may not be on the first popup.) Often the most this map is good for outside of these few specific points of interest and the general location of some of the major trailheads is to show boundaries of BLM lands.

Like the Forest Service map, it is only available on-line so I grab screen-shots of areas of interest while I have a connection. 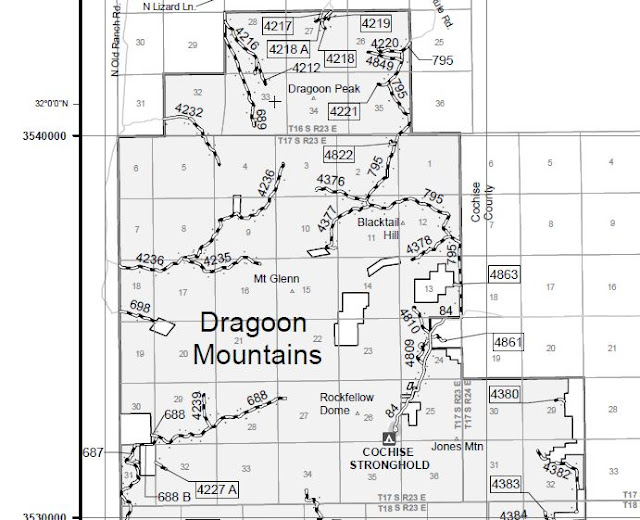 While I'm on-line and prepping for a National Forest stay, I'll also get an updated MVUM (These can change from year to year because of fires, slides, and over-use, so checking for updates is prudent.) for the forest I'm interested in. These are also PDF's that can be downloaded directly to my phone. One place to find them is at this National Forest site.

But, as we've come to expect with all things government, finding your map here is not fool-proof. For instance you will find no mention of Coronado National Forest at this particular link. Then again if you go to this Coronado NF site you can not only find Coronado NF MVUM's, but, illogically, also come up with links to hard-to-find MVUM's of other locations such as Gila NF. 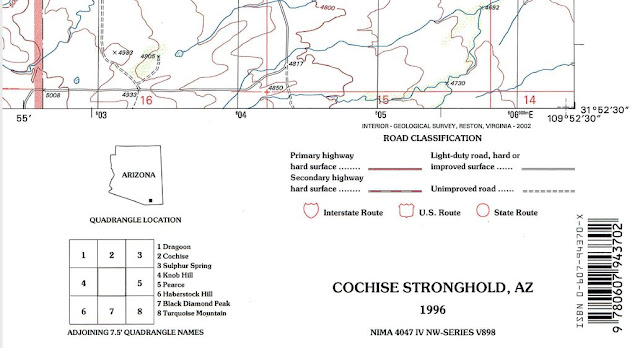 They don't always show the trails, even long established trails, but I also like to have a proper USGS topo for the area I'm going to be in.

For those I go to the USGS store

then zoom in on the map until I locate the area I'm interested in, 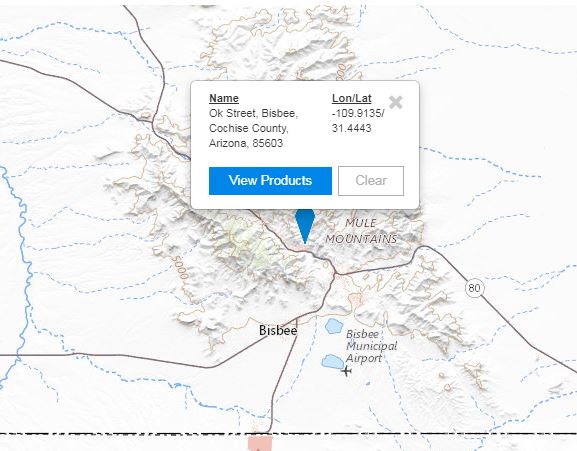 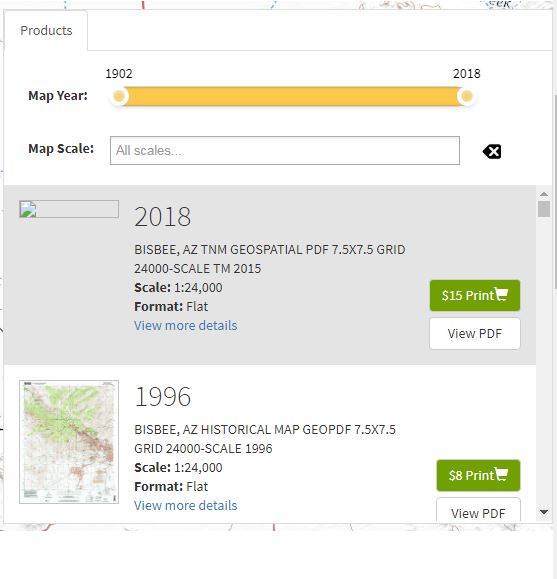 This opens a new, scrollable pane over on the right side of the screen listing all the USGS maps for that spot. (And farther down the list, maps for the 8 adjacent squares as well.) Usually the map I'm interested in is at the top. The most recent geospatial PDF 7.5X7.5 grid, 24000-scale map.

The $15 is for if I order a paper version. By clicking on the View PDF button, for no charge the PDF version will download and then I click on File > Save As and move it onto my phone. 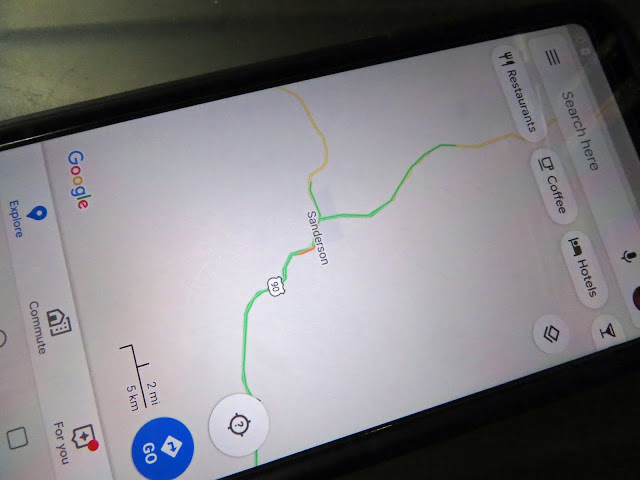 A final, hail-Mary type of trick I use when I know or suspect there may be no service available where I'm going, is to open Google Maps on my phone while I still have service, then pan and zoom around in the area I'm going to be. Though this is more relevant to finding my way around a town than hiking a trail, 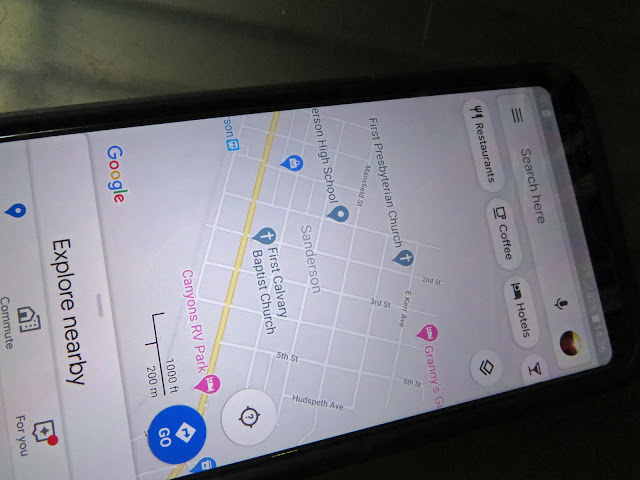 Later, as long as that's the last thing I did on Google Maps, I can open the app and data for that last area I looked at will still be there in the app, even when I have no service and have stopped the Maps app in between.

There won't be any clickable points or traffic data, but I can still zoom and pan around within the confines of the "remembered" area. (Things are just blank if I go outside that area.)


The point is, there is no excuse these days for wandering around, especially in the back-country, without proper maps.

Frankly I don't really care if the people that choose do so despite all the resources available to them get themselves into trouble, but it twists my knickers when it takes my tax dollars or, in some cases, someone else's life, to then get them out of trouble of their own selfish making.