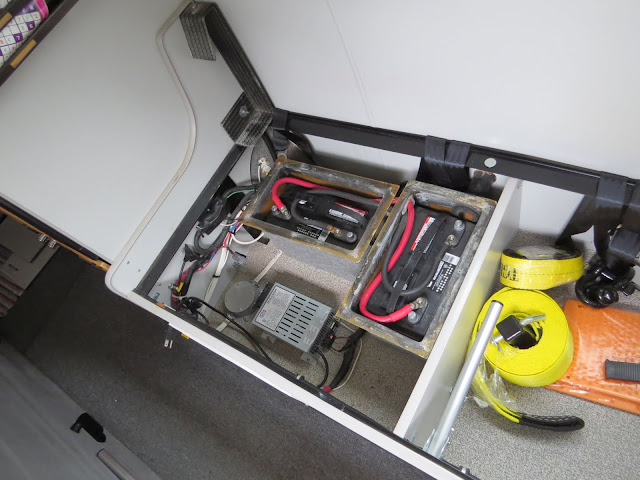 Though The Van's house batteries are still serviceable, and I say that with air-quotes, lately the voltage drops off quickly once the sun goes down so if I don't have sun every day I am getting close to having a power shortage because as voltage drops amps climb to compensate which makes the voltage drop faster which - - well, you get the idea.

The drop-off in power isn't surprising since this set of batteries is 3 years old, about the life expectancy of flooded wet-cell lead-acid deep-cycle batteries that, according to my Xantrex battery monitor, I've drawn about 11,000 Ah out of during their lifetime.

For about $300 I could replace them with a new set of the same battery. When new this gives me about 100 Ah of usable power between charges  (Draw any more than 100 Ah out of the 200 Ah of lead-acid battery and I greatly reduce their life.) which has proven to be sufficient, if not plentiful - most of the time anyway.

But like most boondockers there are times when I could use more, like when parked in the almost perfect campsite. Almost perfect because it lacks some decent hours of direct sun for recharging those batteries. So I have been eyeing the more expensive Lithium Ion technology for a while now, and this time, without overthinking it too much, I closed my eyes, held my nose, 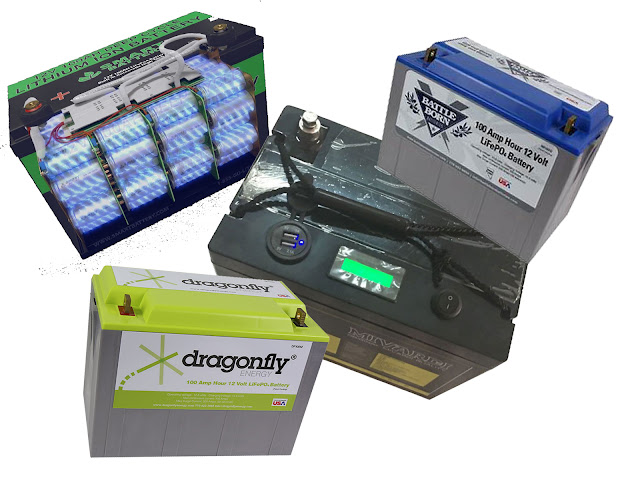 and jumped in with both feet.

Well, not quite.  There was a lot of research and hemming and hawing and backing and forthing involved before I spent $1898 dollars on a pair of replacement batteries, because I don't care how you crunch the numbers, $1900 verses $300 is a damn big plunge! (And now my dream of an electric bike will just have to remain a dream a while longer!)

But here's the basic pro-con number-crunching I did:

So purely on a cost - performance basis the price is, for all practical purposes, a wash. It's just a matter of spreading the payment out over time or eating it all at once.

But several other factors tipped the scales towards lithium for me.

Of lessor interest, but still note-worthy:

So why did I go with Battle Born batteries other than them having the right chemistry? (Not all lithium batteries are created equal so the particular chemistry is important.)  Well the free Ground Shipping didn't hurt, (more on that saga in a moment) but that wasn't all. Not that other companies don't produce a good product, but the Battle Born batteries checked a lot of boxes for me.

So I pushed through the temporary panic of spending that kind of money, and made my purchase.

Which triggered the shipping saga. . . 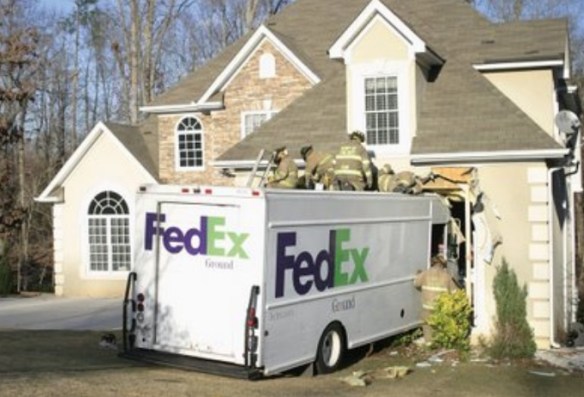 The one unfortunate thing about this deal was that Battle Born ship their product via FedEx Ground.

UPS will deliver to our property with no problem, but FedEx is married to the USPS and since the USPS will not deliver here to our property, FedEx can't figure out how to either.

None of the in-store FedEx shipping locations around us would accept the shipment, (Did I mention that despite the safe chemistry the batteries are still classified as hazardous materials?) so I did what I thought was the logical thing 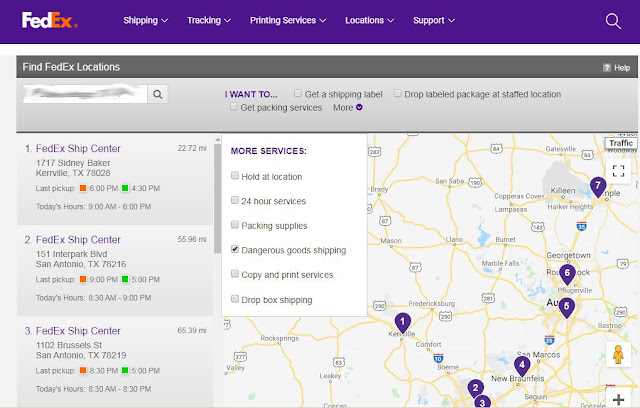 by getting on the official FedEx Shipping Center Locator web site and putting in my location. Originally there was a ton of places listed around me, but then I pulled down the "more" menu and clicked on Dangerous Goods Shipping.

That cleared out the map considerably, eliminating all but actual FedEx locations, and I selected the closest of the remaining sites (by the way, I didn't use our real location to set up this screen-grab) and plugged that address into the Ship To info on my order, cringed when my wallet squealed as I clicked that final "submit order" button, then sat back and waited.

Within moments I had an e-mail from Battle Born confirming my order, and an hour later another one confirming acceptance of my payment. The next day, sooner than I expected actually, I got a Battle Born message saying my order had shipped and giving me the tracking number.

For the next 4 days I hovered over the laptop watching my batteries make their way by truck across the country and when they arrived at the shipping center (At least that's what the tracking said.) we drove 65 miles one way to go pick them up.

Only they weren't there.

If you look back there at the official FedEx Shipping Center Locator page, nowhere on there does it say anything about Express or Ground, just FedEx. Well it turns out that all the Shipping Centers showing on that map are in fact FedEx Express and though if you walk in the door with a box of grenades in your hand they will accept your hazardous shipment from you and then send it on its way via FedEx Ground, they will not accept incoming shipments of any kind from FedEx Ground.

With directions from the clerk at the shipping center we drove across town to the actual, and unlisted, FedEx Ground facility to see if we could sort this out, but it is gated off and closed to the public. Sitting in the employee parking lot and looking at a locked security gate I got on the FedEx phone system and tried to redirect the shipment to another address. After a couple tries I managed to negotiate that labyrinth (Which at one point had me shouting "REPRESENTATIVE" repeatedly into my phone, and I hate shouting.) all the way to the desk that could redirect my batteries, only to find out that only the shipper could do the redirect. As the lowly recipient I'm not allowed.

So I called Battle Born, was answered right away by a real person even though it was not quite office hours in Reno Nevada yet, and, rather than going through the hassle of working through the FedEx system to redirect the shipment, the woman at Battle Born told me she would just let those original batteries be returned to them, which is the default action when a FedEx Shipping Center refuses a FedEx Ground delivery, and, if I would give her a different address, she would send out a couple more batteries today. No fuss, no muss. (Although FedEx managed to rip the bar-code off one of the returning batteries as they were passing through their North Salt Lake City location and there was a few moments of confusion when one of the errant batteries arrived back at Battle Born a few hours before the other.)

This time I had given my 78 year old neighbor's address and within hours had a new tracking number to watch.
When I saw that the second set of batteries had reached the final FedEx location and went "out for delivery" at 0739 I set my timer (It takes a minimum of two hours to get to our place from that FedEx location, and that's without any stops.) and at 0930 parked The Van out in front of the neighbor's gate and settled in.

Oh, and I mean literally settled in. It had started raining around 0230. Not hard but it hadn't let up since. It's a dang good thing I have aggressive tires on the rear of The Van because I left a couple new ruts alongside the road up by his gate! When I got back down the hill to our place later I had mud from tread to lug-nuts. (I left the mud there for nearly two weeks before washing The Van because - well, you know - it's manly - - -) 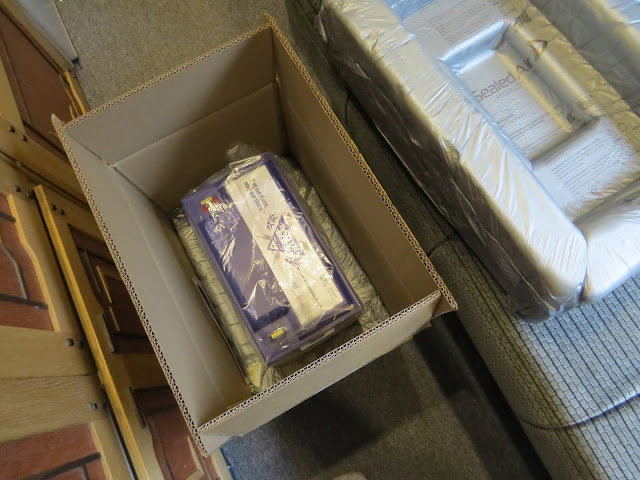 Around 1330 a Budget Rent-a-Van with two guys wearing FedEx shirts coasted by on our narrow county road, turned around at the bottom of the hill, eased back on up, and I finally had my batteries in hand.

This was actually earlier than I expected so that was nice. (We once had a UPS shipment go "out for delivery" at 0600 one morning and the truck didn't actually show up until 0200 the next morning.)

The batteries were very well packed. It would take some massively severe damage to the packaging to get through and damage the battery inside.

The double-walled boxes went into our cardboard recycling and there are disposal/recycling instructions printed on the custom-molded foam inserts. As instructed, I stripped the plastic off and it will be recycled with our other thin plastic. The foam innards are apparently biodegradable, over time, and and in the meantime will compress to 18% of their original volume. Yeah, right! Maybe if I had a hydraulic crusher on the property! I'm afraid those went, at full volume, to the solid waste transfer site. 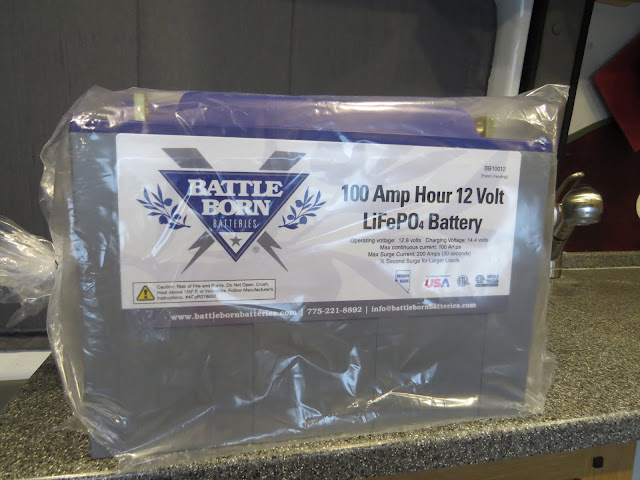 You would think for something that costs this much the graphics might be a little more eye-catching, or at least have a few more colors beyond grey and blue, but I paid for function not looks. Lipstick on a pig and all that. 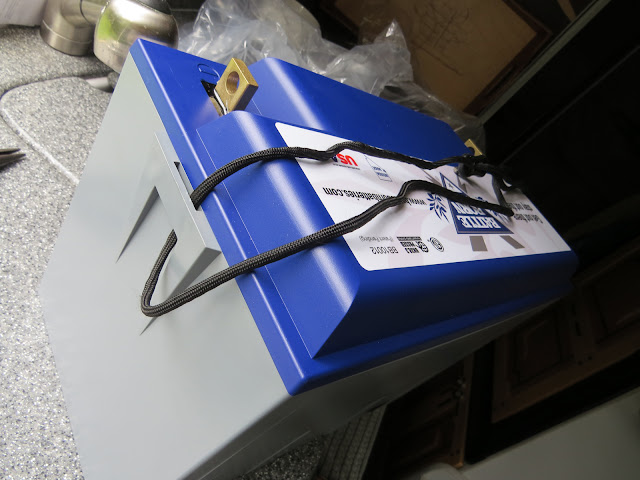 At 30 lbs apiece these batteries are much lighter than their lead-acid counterparts so I can understand not incorporating a lift-handle onto them, (If you really want to you can buy a lift-strap from Battle Born that uses the terminal bolt-holes.) but 30 lbs is still half a feed-sack so I fashioned a temporary lift handle out of 1100 para-cord (I ran out of 550) using the strap-hangers molded into the battery case to lower them into the battery boxes. 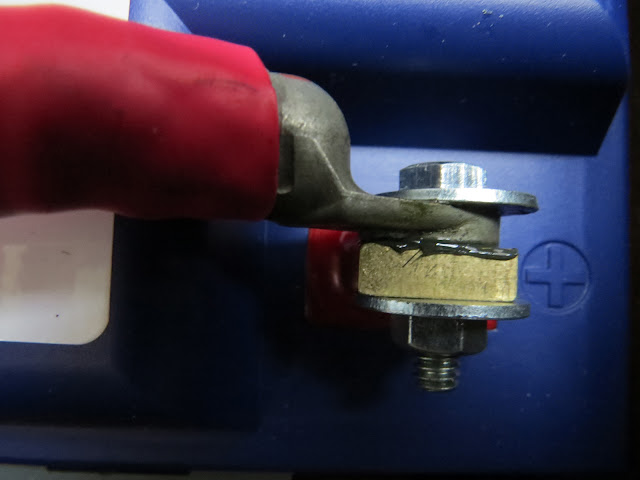 A little smear of my GB Ox-Guard to ensure a good connection and cut down on oxidation at the connection points, and I bolted the original cables onto the new batteries. 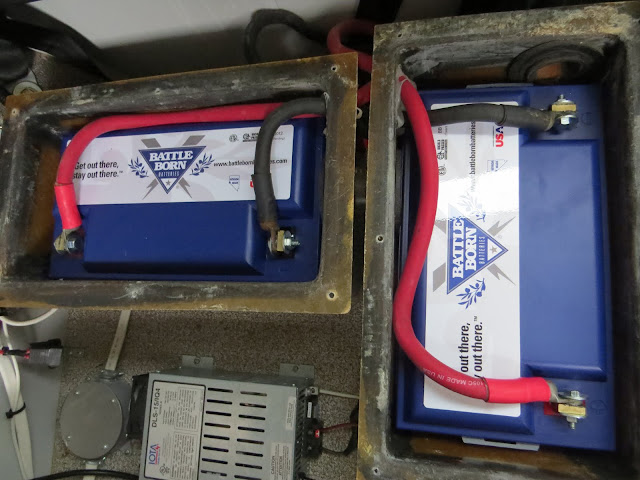 Now I was ready to bolt the box-lids back on. 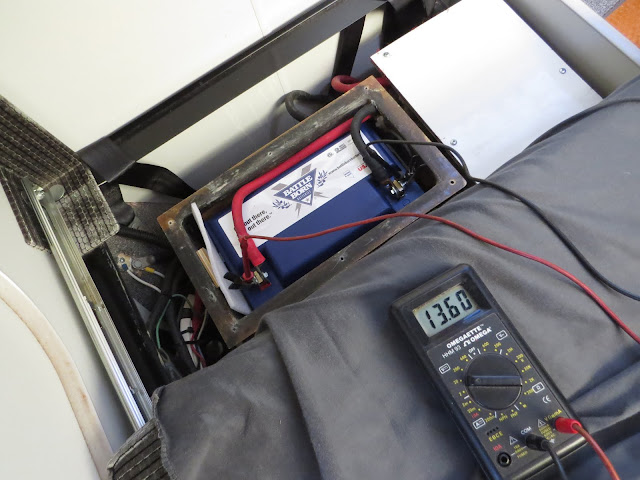 More on setting up my equipment for, and charging the new lithium batteries coming up.