And Now For Something a Little Different 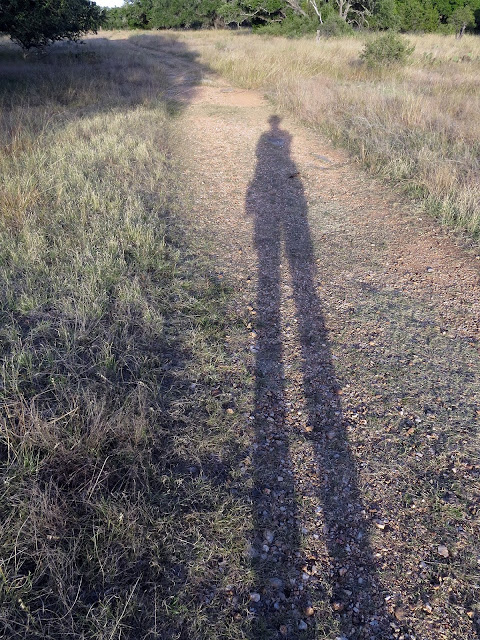 I know, I know. You've seen me post photos like this before so what's different about that?

The difference between a hike and a backpacking trip?

A hike is a few hour walk, stroll, meander, or lollygag, (take your pick) usually between sunrise and sunset. A backpacking trip is deliberately carrying your shelter and sustenance on your back with the intent of spending one or more nights out on the trail. 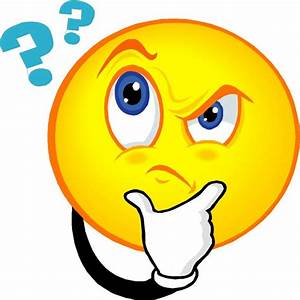 You see - when I wasn't wallowing in depression and/or nursing a raging case of self-pity, over missing camping during the spring-summer-fall of Corona, I was contemplating ways to deal with the sudden rush of newbie campers overwhelming the limited resources of the park systems, along with the loss of the usual relief provided by the "good the kids are back in school and out of my way" season.

In these times, here in Texas where public lands are scarce, any camping trips have to be planned and reserved for at least a month ahead of time, and even then the pickins are pretty slim, even for someone like me that is happy, in fact would prefer, to use the hookup-less sites. 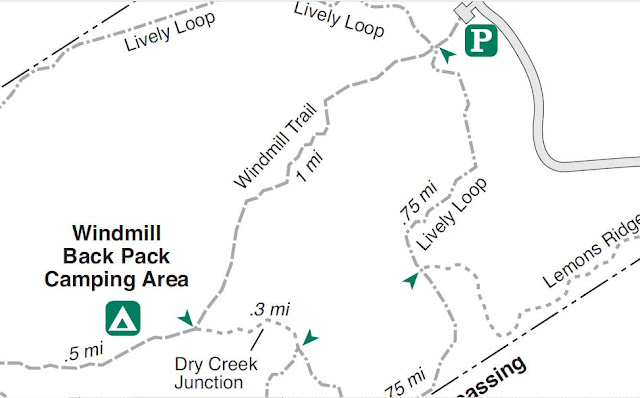 But many of the parks in the Texas State Park system also have backpack camping areas as well as the drive-up sites. Obviously these don't appeal to quite as wide a demographic so maybe they would offer additional opportunities for those who are willing?

While desperately trolling the reservation system I noticed that when all the other campsites were showing X (unavailable due to social distancing issues) or R, (already reserved) there were often A's (available) showing in these backpack areas.

That's not to say that there's no interest in these campsites, but still, I wondered if maybe I could stitch together trips of more than a night or two (Which is important when the nearest "good" state parks are at least 4 hours away) by mixing backpack sites with campground sites. 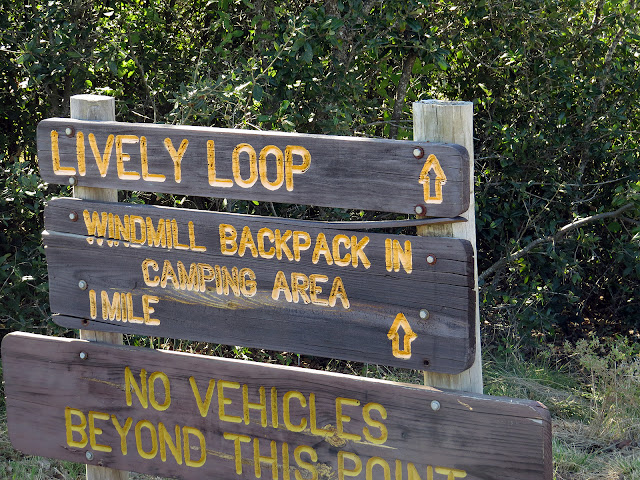 Which is how, on this Sunday evening, the first day of November, I found myself setting out to hike into a back-country campsite, and spend the night on purpose, for the first time in a long while.

(Despite the fact that the very red governor and state attorney general of Texas did their damndest to disenfranchise the less economically blessed voters of Texas, or scare off that demographic that takes Covid exposure seriously, with a variety of tactics, including disallowing fear of Covid as a reason to mail-in your vote while at the same time allowing only a single ballot drop-off point per county, despite the fact that Texas has 9 counties larger in land-size than the states of Delaware or Rhode Island, and one county with a population greater than 27 of the US States, it turns out they could not disrupt the rights of those 65 and over to mail-in their vote, nice and early so that dude at the USPS couldn't screw it up as well, so I was free to camp during election day.)

OK, OK. I'll concede that it's (I'm back to the backpacking now) actually not as adventurous as it sounds. The majority of these backpacking sites are only one to two miles from the trailhead so it's hardly an epic journey and legging it back out to The Van for more supplies, or get out of the rain, or to cook up a more elaborate hot meal, is certainly doable. 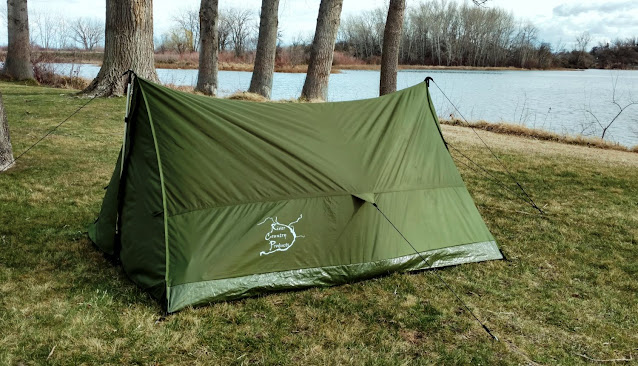 And to make things a little more civilized, which, as someone old enough to be a Medicare recipient, I think I'm entitled to, rather than "rough it" with my tarp, I equipped myself with one of these for $50.

It's not nearly as sexy and elaborate as some backpacking tents, but is much more flexible than many costing significantly more and will do me just fine. 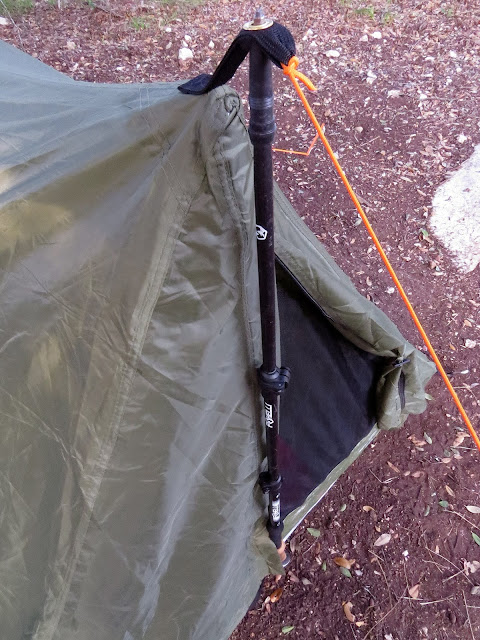 This tent doesn't come with poles. Instead it is designed to use your hiking sticks instead. 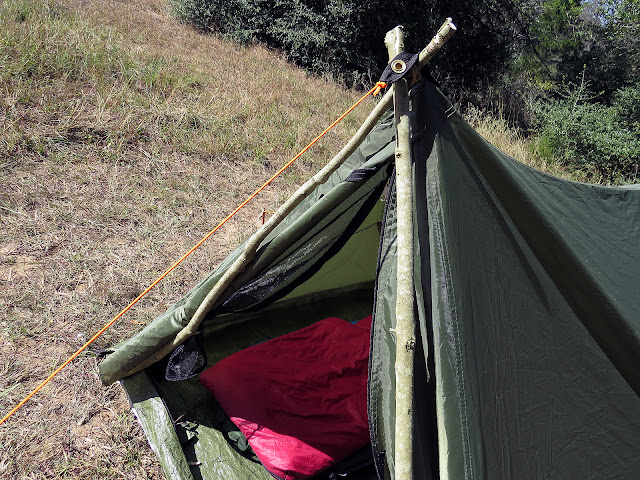 Or you can, as I did here when practicing before heading out for real, process a couple of sticks on site, lash them together at the top, and have a setup which leaves the entire front door unobstructed for easier access for those old bones that have just hiked in with a full backpack.

Since I had never scouted this camping area - the Windmill Backpack Camping Area in Colorado Bend State Park - with actually camping there in mind before, it was pure luck that I had managed to reserve one of the two best campsites out of the eight and was able to pitch my tent in a secluded spot under a Live Oak using no poles of any kind. 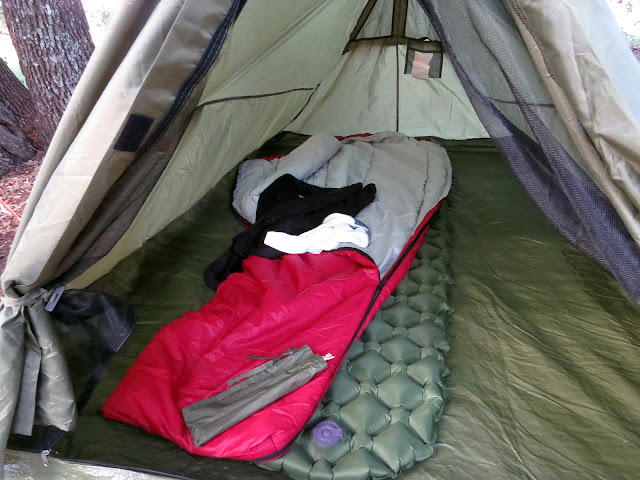 By the way, in case you didn't know, "person sizes" of tents are about as accurate as waist sizes for pants.

A "two person" tent is NOT! Even for two very close people. But it will be comfortably adequate for one person and their gear. 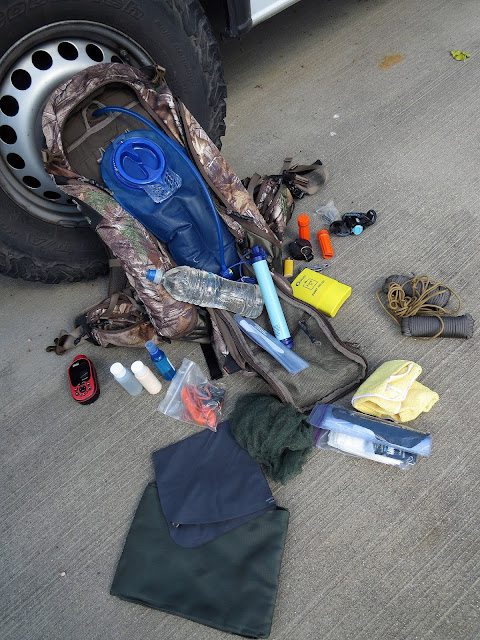 This is what I already carry on day-hikes.

Starting at 9 o'clock and working roughly around in a counterclockwise spiral I have: (See, I'm assuming you're interested. If not skip ahead a couple-three photos.)

That might seem like a lot of crap for day-hiking, but I hike alone and I am a strong proponent of being responsible for my own actions and that includes being prepared for self-rescue if necessary.

The pack and the usual stuff in it weighs in at 7 pounds. The 4.7 liters of water adds 8 pounds to that. 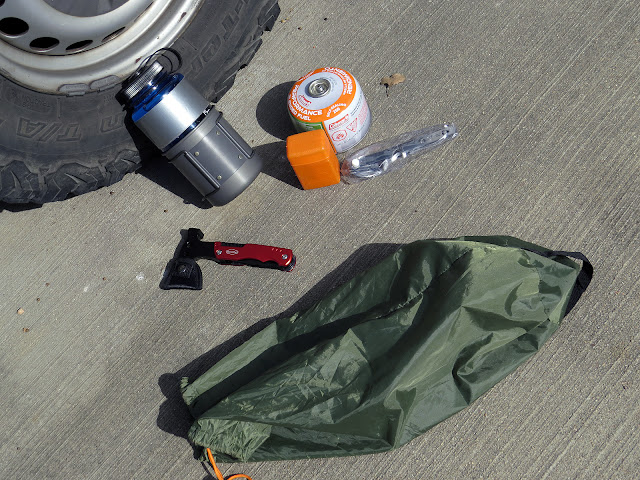 For my overnight experiment I added the following:

I already had all this stuff in my inventory and it, including a liter of water, weighs a total of nine pounds. 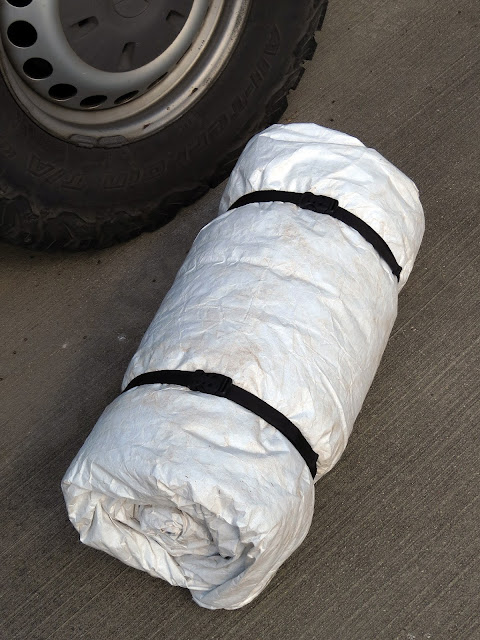 And finally, my bed-roll which consists of:

The sleeping bag and deflated sleeping pad and pillow, (to be added soon, see below) are left laid out in the tent. The tent is flattened down on top of it, the little bag of stakes is then tucked just inside the door, The tent and groundcloth is folded into thirds lengthwise and finally the whole thing rolled up.

Yes, I could get this to roll a little tighter if I worked at it, but it weighs the same either way.

This way, if the weather is not great the sleeping stuff never has to leave the protection of the tent.

I could do without that glaring white of the Tyvek, but it is very tough and durable for it's weight, and I already had it on the shelf. Maybe over time a little use and grunge will tone it down a bit.

Anyway, the "bedroll" also weighs in at 9 pounds, for an all-up total of around 34 pounds of gear, clothes, and boots. Then I have to add the food.

In my case the "food", instant noodles, dry soup, instant oatmeal, tea, and maybe a few cookies for a treat, (Yes, I could throw a proper freeze-dried meal or two in there but man, have you seen what that stuff costs?!) weighs pretty much nothing. (The food-weight is in the water bottle) I prefer instant stuff with it's own container. That way I can dump heated water in the container then turn right around and use my cup/pot for brewing up some tea.

This is not what some would classify as gourmet cuisine, but then again, if we didn't place so much emphasis on "cuisine" maybe we wouldn't be so fat.

And all this highly processed food is not exactly the healthiest, but it's not like I eat this stuff every day and in the short term convenience takes precedent. 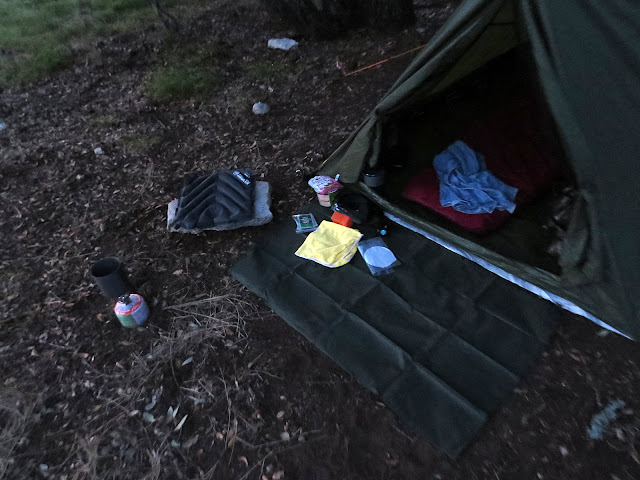 Anyway - as daylight faded to moonlight that evening, camp was set up, I was heating water for dinner and browsing the kindle app on my phone (In airplane mode since there's no cell service out here so no sense in wasting battery as it searches for a signal) pre-loaded with the maximum of 10 kindle-unlimited books.

I was a happy camper. Literally. 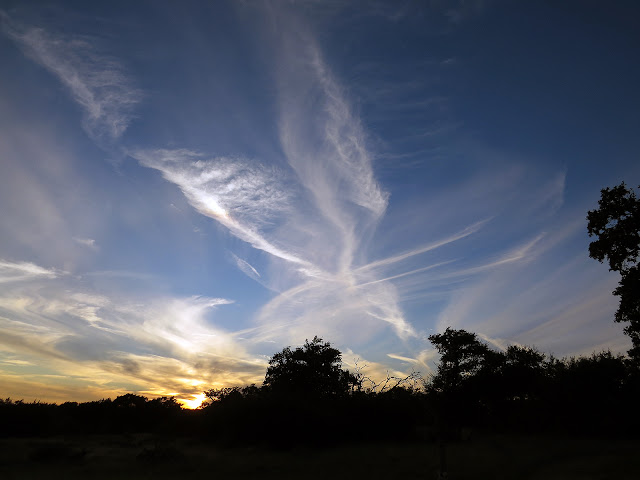 First off, yes, this backpack camping thing is going to work, so it opens up some additional camping opportunities for me.

But it did get down into the high 30's that night and I think I need to replace my 20 year old, cheepy sleeping bag regardless of its optimistic-when-new 20 degree rating. On cold nights in The Van it works fine as an extra blanket on top of the microfiber fleece I normally use, but it just wasn't quite up to the task in that tent.

The same goes for my sleeping pad. The inflatable pad I took with me would have been fine on a more temperate night, but I suspect that the foam in my other one, my slightly bulkier self-inflating sleeping pad, would have provided better heat insulation from the cold ground.

And my inflatable seat cushion propped on my pack functioned adequately as a pillow, but it was awkward so I think I might just look into adding a proper inflatable pillow to my inventory as well - as long as it isn't too pricey that is. 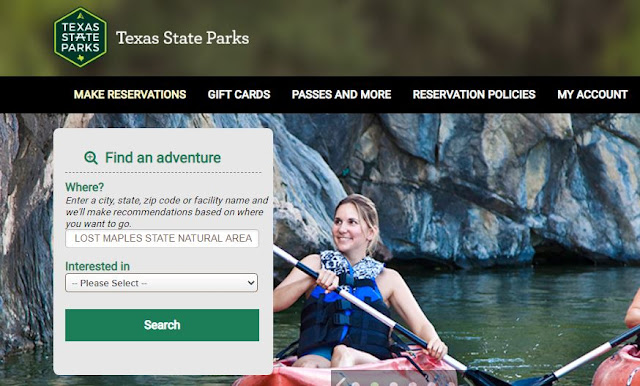 Now - where and when can I get booked in for my next trip??