Overstaying My Welcome on the Tinaja Trail? 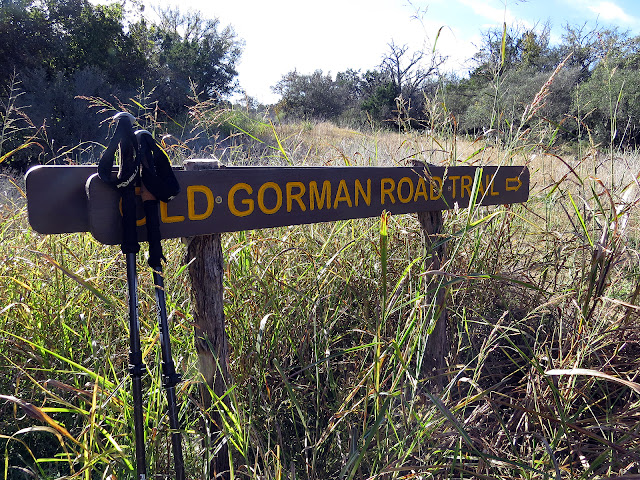 Last week when we were out here I cut the narrative short when I reached the northern end of the River Trail, but that wasn't the end of my hike. 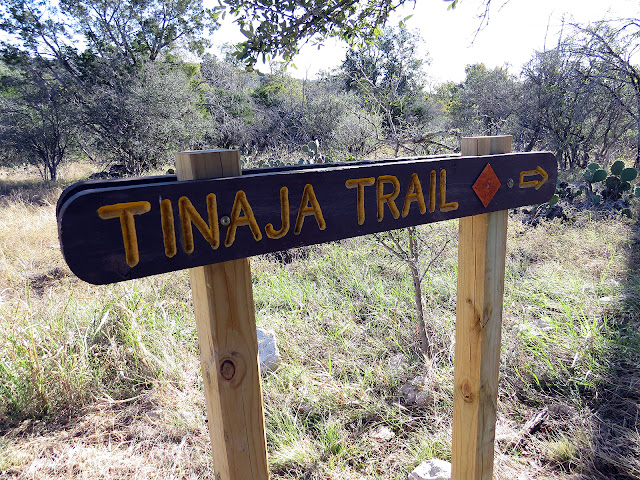 From the end of the River Trail it was still a couple of tenths uphill (of course everything is uphill from the river) to the real objective of today's hike. 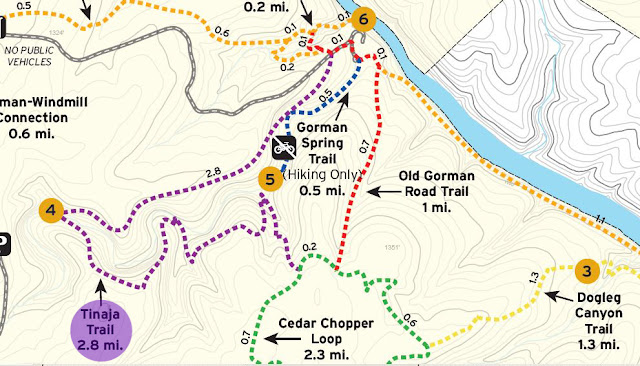 The Tinaja Trail, up there in purple, (I have no idea why they print the trail in purple yet blaze it with orange. Maybe it's a test to make sure you're paying attention - but I suspect it's more likely they aren't paying attention.) is one of those trails that begins and ends well away from a drive-up trailhead.
The northern end of the trail may look like it is on a road, and you're right, it is, but that's not a public road, so it's still about a mile and a half from the nearest parking.
The southern end of this trail terminates at the Cedar Chopper Loop at a point just under a mile from the nearest parking. 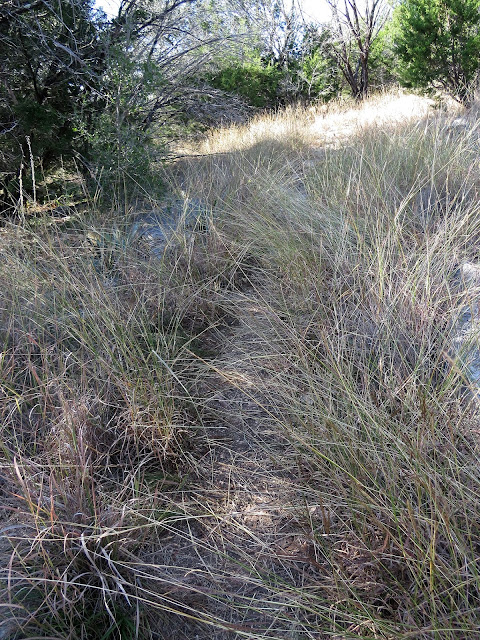 Which might explain why the Tinaja Trail appears to be lightly used.
And that's exactly my kind of trail so, even though it took me about 4 miles of hiking just to get to the start of it, off I went as the trail tracked along the ridge on the northwest side of the Gorman River watershed. 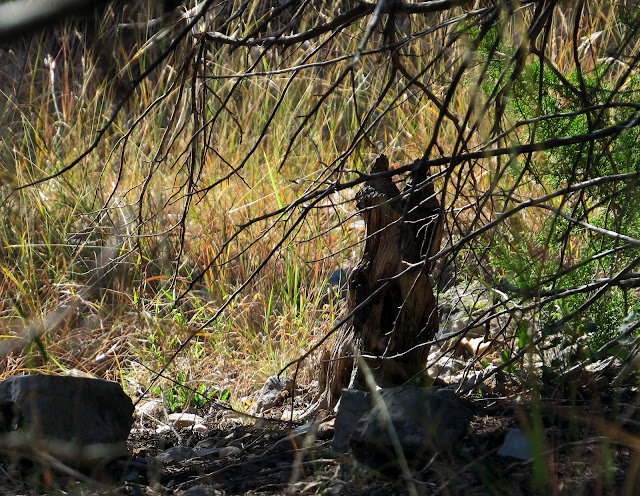 Oh Crap!
Wolf!!
Wait - Nope - Just a stump - - -
It's amazing how many times that happens when you're a lone hiker on a lonely trail. I'll suddenly be aware of how isolated I am, then I start getting a creepy vibe and the wind makes some weird noise off in the distance and suddenly a stump, or bush, or branch turns itself into a potentially dangerous critter. At least for a moment.
But that doesn't mean the next time won't be for real! 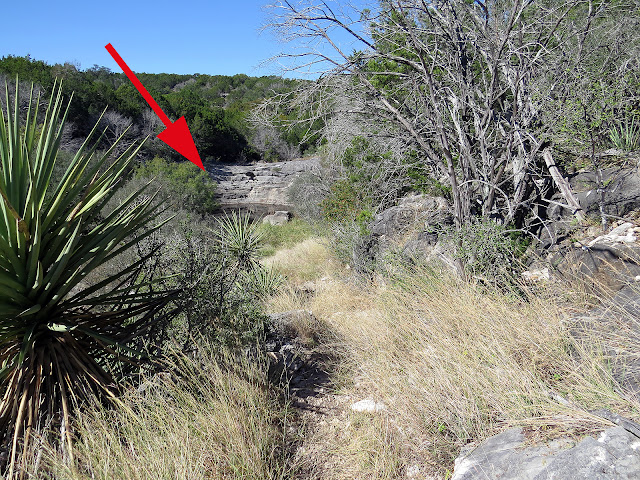 As you would expect, the key feature of the Tinaja Trail is a tinaja.
A depression in the rock where water tends to collect.
I've visited a lot of tinajas around the west. Most are, at best, modest little pools. Some are tiny little mud-holes. And others are dry depressions where the only sign of water is from the mineralized marks of evaporation. 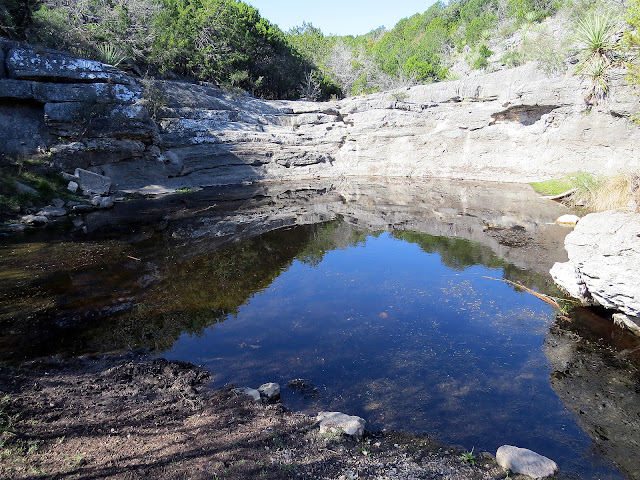 By comparison, this tinaja is a friggin lake!
I've been here before, but I honestly don't remember it being this big.
There's a whole aquatic environmental thing going on here with water-plants, fish, turtles, the whole shebang. 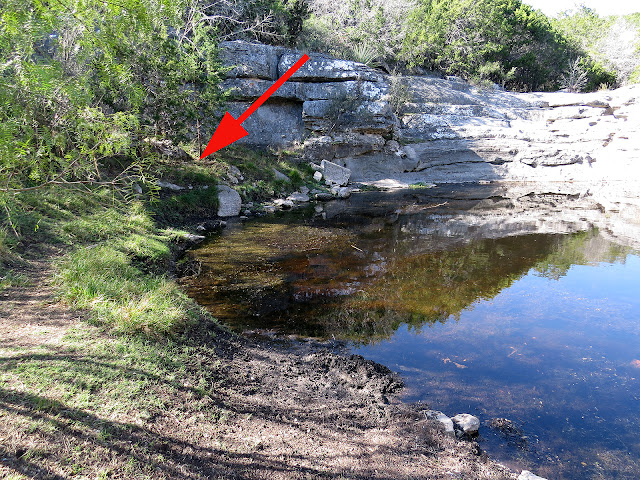 And over there along the sheltered southern bank - yep, right there - 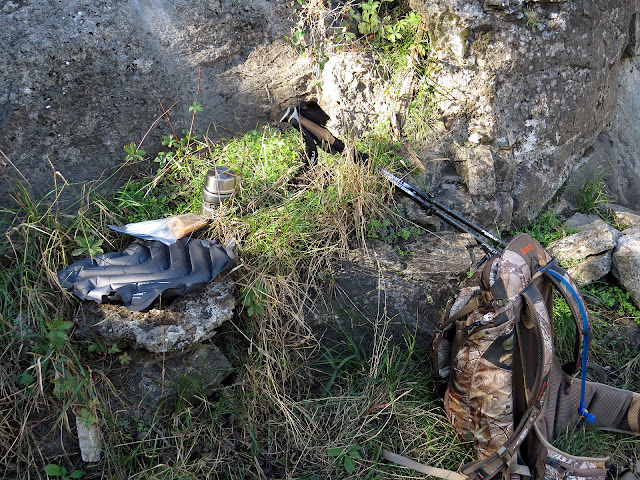 I see my lunch spot! 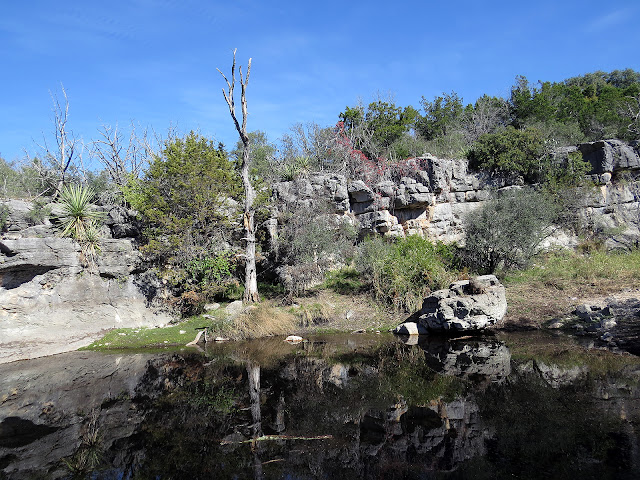 And with a view like this I was in no rush to - well - rush my lunch.
Though a moving human is pretty dang disruptive to the natural world around him/her, I've found that it doesn't take much sitting still, and by that I don't mean frozen, barely daring to breath and moving nothing but your eyes, but rather just being quiet and non-threatening, for nature to begin to resume her natural activities.
At this time of the year (early November) one of those activities was dragonfly mating.

There were these small, dusty-red ones, linked up like military jets planes performing a mid-air refueling as the female, in the rear, dips her ovipostor to the surface of the water time and time again, depositing a single egg with each lunging dip.
By the way, the male isn't hanging around in order to guard her, not in the sense of protecting her anyway. He's clasped onto her and won't let go until he's sure that she has laid all the eggs he went to all the trouble of fertilizing before another male, of which there are plenty buzzing around and harassing, can get to her.

There were smaller blue ones, like these females hoping, often unsuccessfully, that they can hide out here for a few minutes before getting targeted by some horny male, grabbed by the head, and drug off for some high-speed mating - and you thought only human singles-bars were that tough!
Overhead are great big, bright red dragonflies buzzing and darting and disrupting the proceedings seemingly just because they can, but in reality they are just trying to protect their own small stretch of nesting ground where anything that moves can be perceived as a threat.
All the while this is going on, under the surface, given away only by the V-shaped wakes they leave behind, aquatic predators are cruising around, snacking on single dragonfly eggs one after the other like a six-beer drunk on a sticky brown leatherette couch scarfing down cheese-doodles straight from the bag. 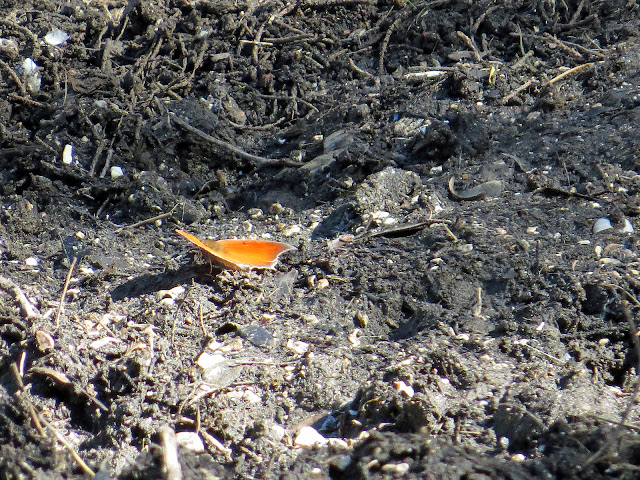 On a more gentile note, over on the far side butterflies lap up the minerals left just above the waterline by evaporation. 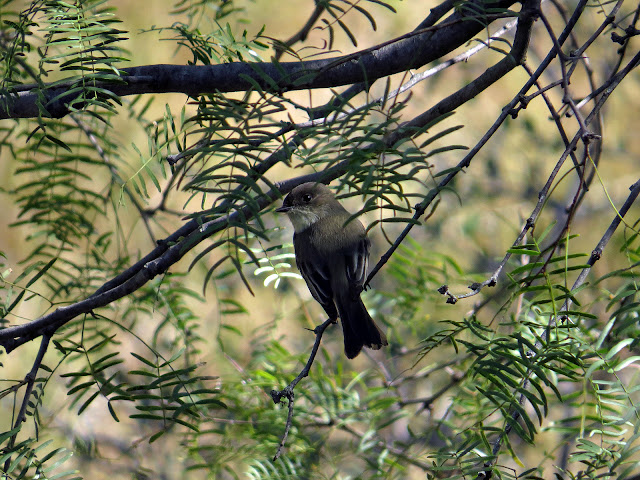 But danger is always lurking somewhere in the natural world.
Such as various birds hanging around waiting for just the right moment, the right motivation, 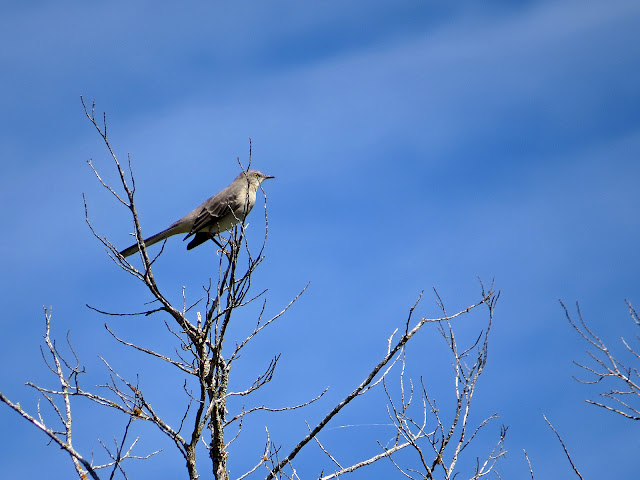 to swoop down and snatch up their own lunch. 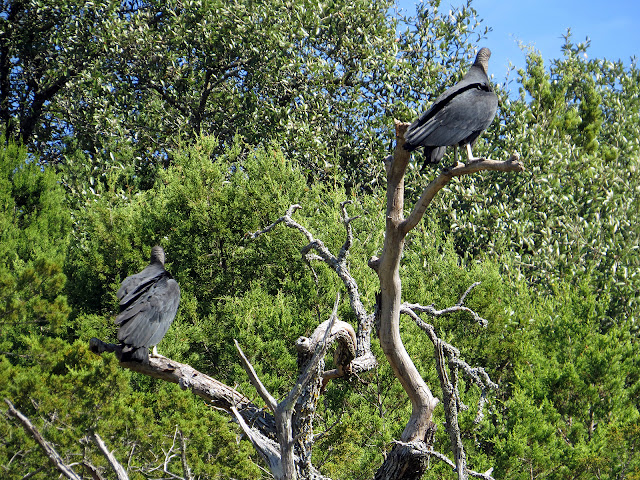 I kinda zoned out and have no idea how long I had been sitting there taking in the show when these two whooshed in over my head and settled down in a tree across the tinaja, 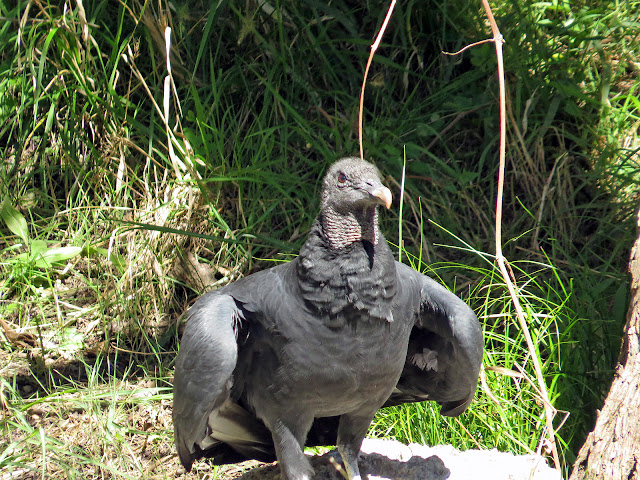 but after some preening and a little ray-soaking, one of them dropped down to a nearby rock and seemed to be taking a special interest in me.
I took that to mean it was time for me to move on, 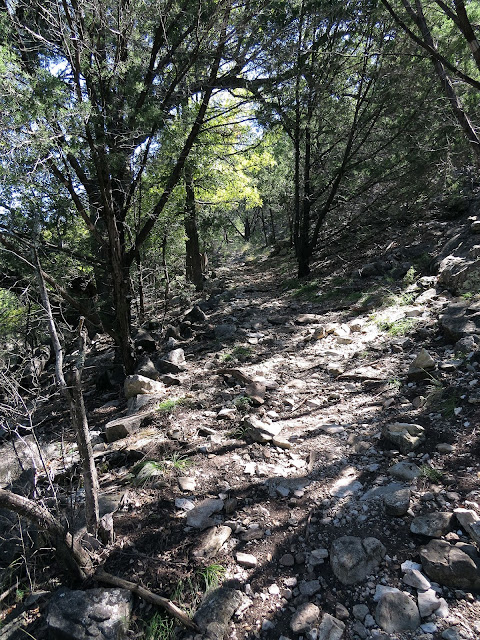 so I gathered up my gear and was soon climbing up and away from the tinaja along the decidedly more rugged southern leg of the trail, 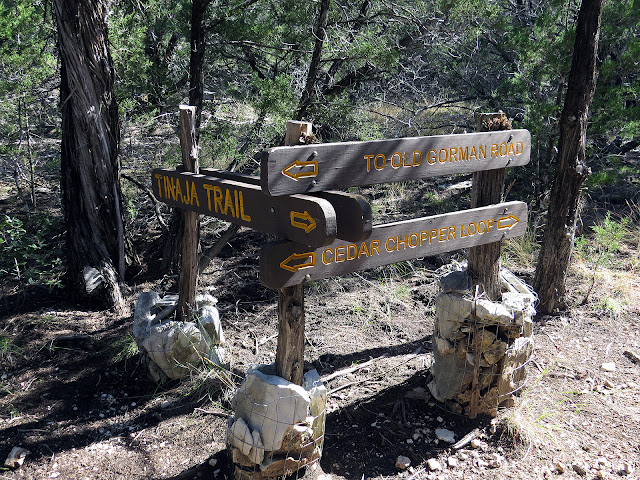 which eventually spit me out on the Cedar Chopper Loop.
I hung a left, but instead of taking the Old Gorman Road back down towards the river 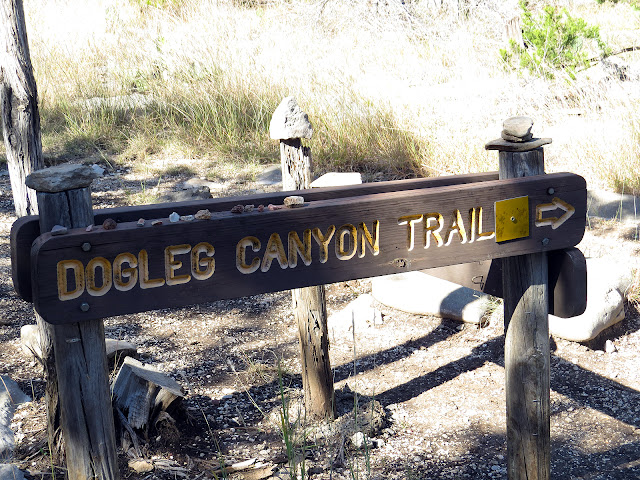 I continued on around the Chopper Loop until it intersected with the Dogleg Canyon Trail. 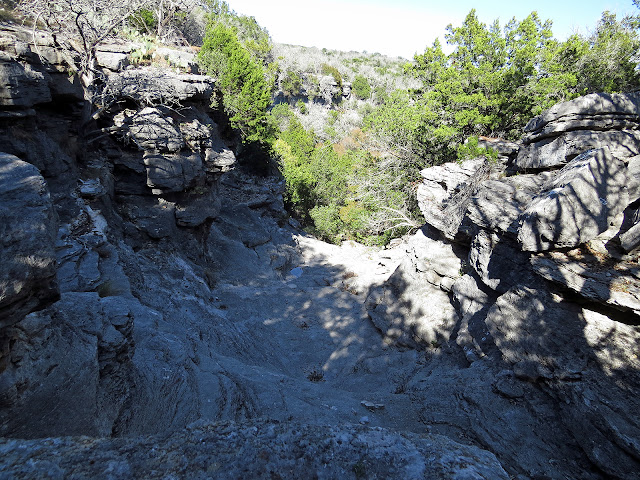 Predictably, this trail took me around the upper end of the short but rugged Dogleg Canyon and, 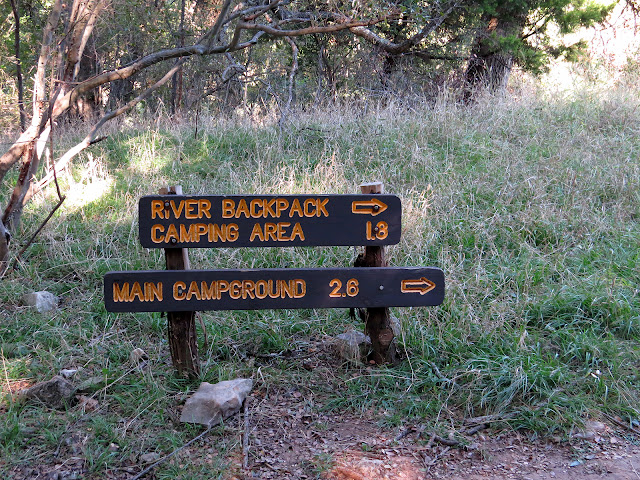 with a rather anticlimactic final switchback, dumped me back out on the River Trail only three miles from The Van. (It's another half mile from the trailhead to where The Van is parked)