Although yesterday's little experiment in evening hiking didn't go quite as I had envisioned, after my hike up Eagle Point Trail to the canyon rim and back today, tonight (Apr 27) I'm going to repeat the evening experiment again.

After all, you often can't tell after the first viewing if a new TV show is going to work for you or not. Sometimes it takes several episodes to figure it out, and I'm willing to give evening hikes the same consideration. 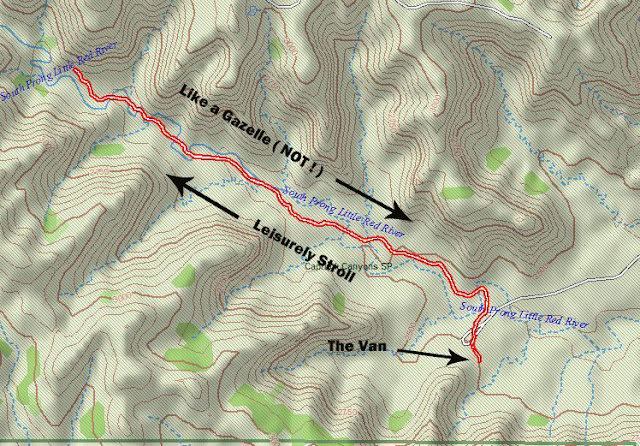 So, despite yesterday evening's Bison-inturuptus episode, tonight I'm back out there again - you know, just to see.

Same trail, because it's handy, - and yet another hasty retreat - although for a different reason this time - 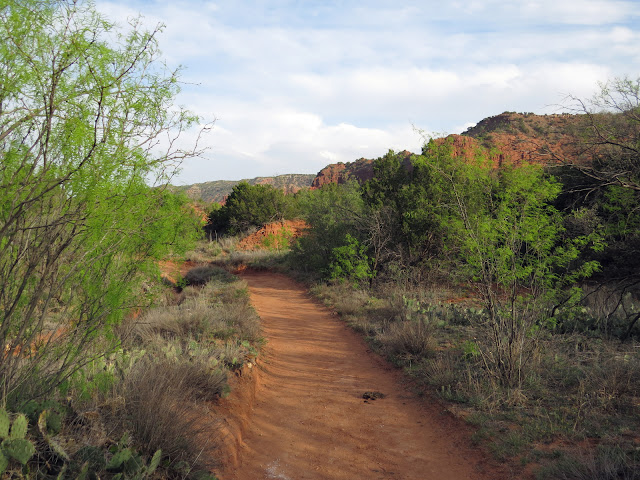 Despite a day with frequent rumbles of thunder and a few passing storms, things are looking pretty good as I head out into the evening. But frequently changing visibility up the canyon is a reminder that there are no weather guarantees this time of year. 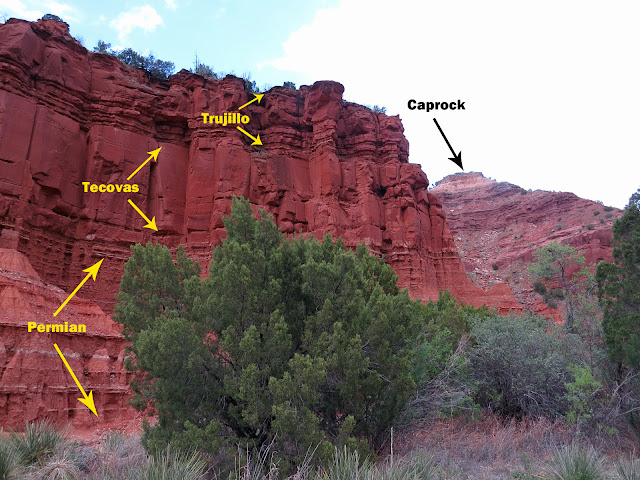 Lit by the setting sun, which should have been behind me, this would have been a pretty spectacular shot, but instead the sky has gotten cloud-heavy so it is what it is.

Speaking of photos, there aren't that many in this post because on the way out the light wasn't all that great and on the way back conditions weren't very conducive to taking the time for photography. 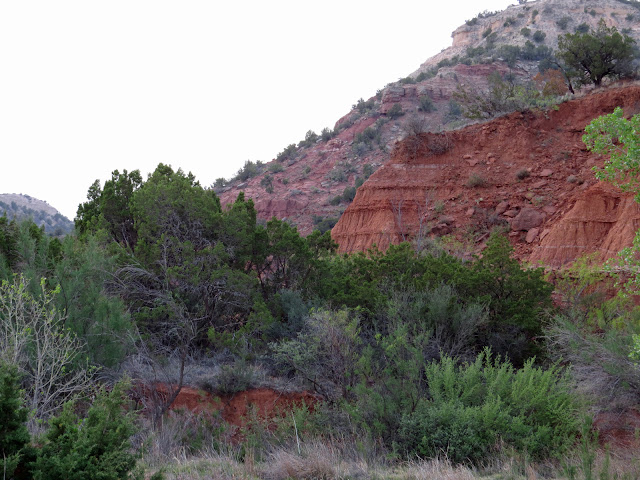 Yep - after a couple miles and eight river crossings (I don't know why but eight seems to be the magic number when it comes to river crossings here in Texas State Parks!) I'm approaching the head-end of the canyon now.

Nope - I have no intention of climbing the face of that Mildly Terrifying ridge there in the background this evening, 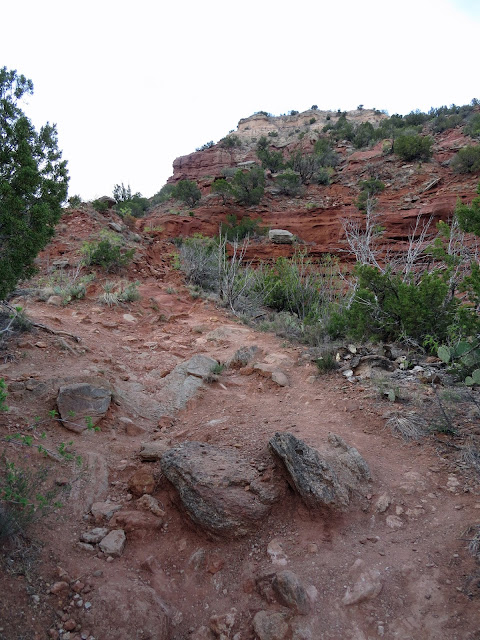 I'm only going to go far enough up its base 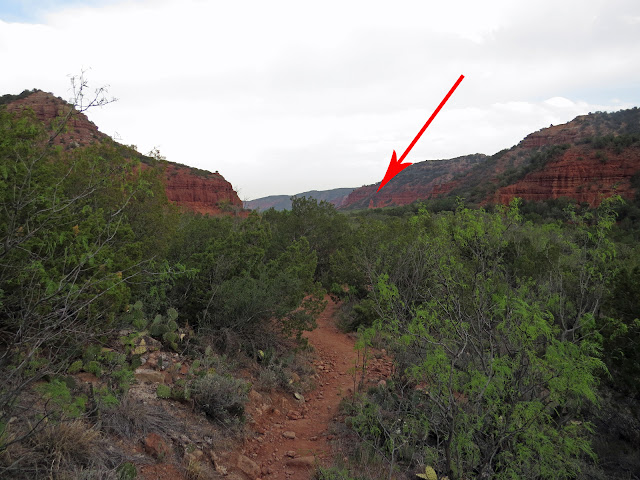 to get a respectable view back down the canyon towards camp.

That's the Guardian out there under the arrow, and I'm not sure why she's so intent on reminding me of my place in her world this particular trip, but right about now the distant thunder has gotten more frequent, less distant, and harder to ignore. 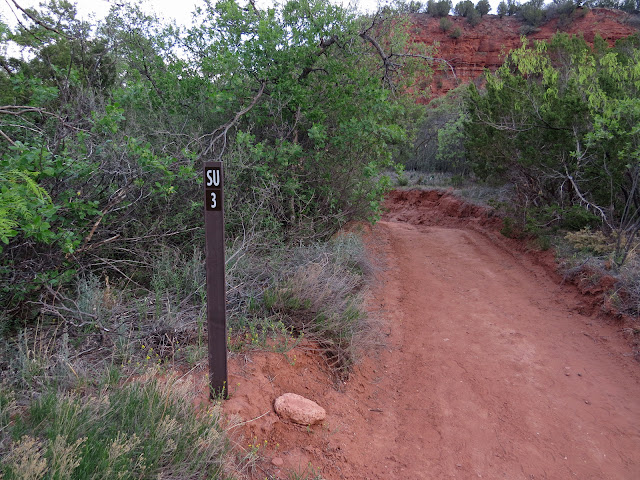 So I head back to camp.

About the time I hit this trail-marker - a mile and a half from camp - the thunder was crowding in up my backside and the occasional stray rain-drop turned into a light sprinkle, so I picked up the pace.

Now I have been packing my rain-gear along this entire trip because of the unsettled spring weather - but right now I just don't feel like stopping to drag it out and pull it on unless I absolutely have to, so I pull the tail of my shirt up to drape it over my camera which is hanging off my pack's hip-belt and step on the accelerator just a little more.

By the time I hit the next river-crossing a quarter-mile later the thunder is just about to slap me up the back of my head and the rain is becoming more persistent.

Also by this time I have stepped it up even more and am actually running!

Funny how yesterday, when being chased by an angry Bison bull, I hustled along but came nowhere near an actual, both-feet-off-the-ground-at-the-same-time run, but tonight the benign hassle of downing-pack, digging out rain-gear, dragging on said rain-gear, and hoisting pack again has me clipping along like one of those holier-than-thou health-nuts out for their daily half-marathon.

Hell, I didn't even know I could still run!

As I've aged there has been very little call for such an undignified activity so why bother?

OK, truth is I was never much of a runner regardless of my age. I ran so little that humping along in fatigues and full battle-gear as I attempted to pass the military requirement of a sub-seven minute mile some 50 years ago still sticks out in my mind as one of my memorable, and hardly enjoyable, runs. (And yes, I passed first time, even if it nearly killed me, because I was NOT going to put up with having to come back and try it again tomorrow!) 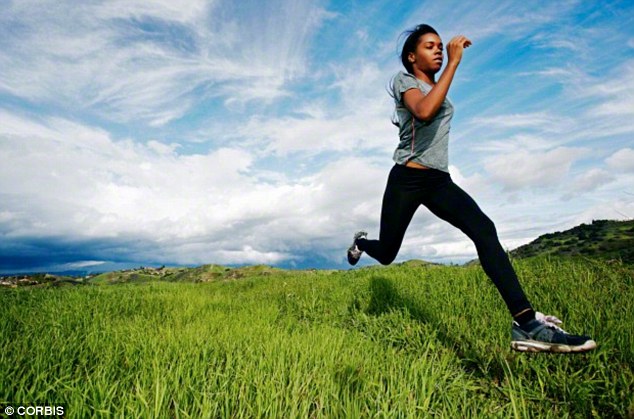 There is an episode of Midsummer Murders that opens with a woman out for her morning jog through the village and she just floats effortlessly along with her forward leg reaching impossibly far out in front of her at every gliding step as she gracefully gobbles up the distance.
Yeah - No - that's not me! 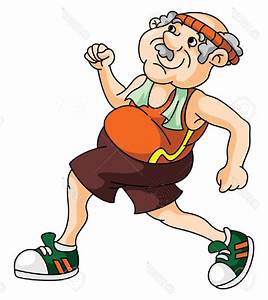 I'm sure, despite the idealized image in my head, that I'm all awkward angles, knobby knees, thudding footsteps, and jiggly flesh, but I'm still shocked that I'm covering ground as fast as I am - and not killing myself in the process!
Here I am, shaking off the shackles of age until I'm running at an amazing (to me anyways) clip along the undulating trail with a 15 pound pack on my back, three pound boots on my feet, and one pumping hand clutching my hiking sticks while the other keeps my shirttail in place over the camera!
I have no idea where all that is coming from but I'm chuffed and I'll take it! (OK, so maybe a little holier-than-thou too, since not all that puffed out chest is due to breathing)
By the time I reach the shelter over the info-plaques at the trailhead I am winded, but not bent-over-hands-on-knees-fall-on-face-and-gasp-for-ambulance winded.
The rain is coming down pretty good by now but since I've just proven I'm up to it - no big deal. With my key in hand for a quick entry, I launch myself out from under cover and run the last couple-hundred feet to The Van where I enter her shelter slightly damp - OK mildly wet - in age-shedding triumph.
You know what? - This evening hiking stuff isn't really so bad after all!!
Posted by greg at 11:05 AM