I Finally Make it to The Gate 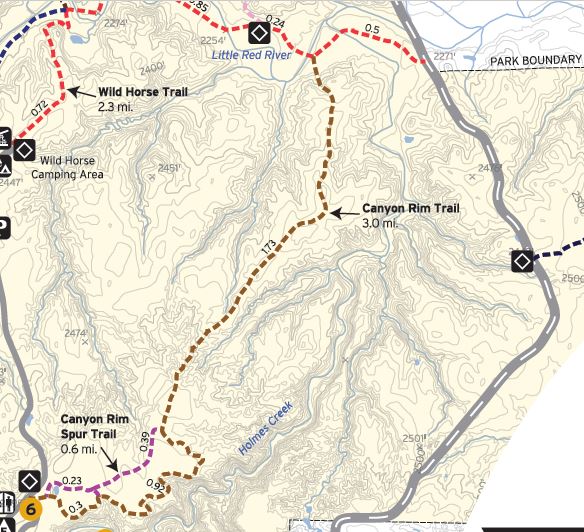 It's been a long time since I've been on the Canyon Rim Trail in Caprock Canyons State Park.

Not because there's anything wrong with it, but because the trailhead is right there at the Honey Flats Campground (lower left corner) with it's paved mix of popular 50 and 30 amp water/electric sites with adjacent playground, and I haven't stayed there in a long time now.

But there is a dozen-or-so-vehicle parking lot in front of the bathhouse, so today (Apr 28) I drove up out of the canyon and left The Van up there on the rim near the campground, 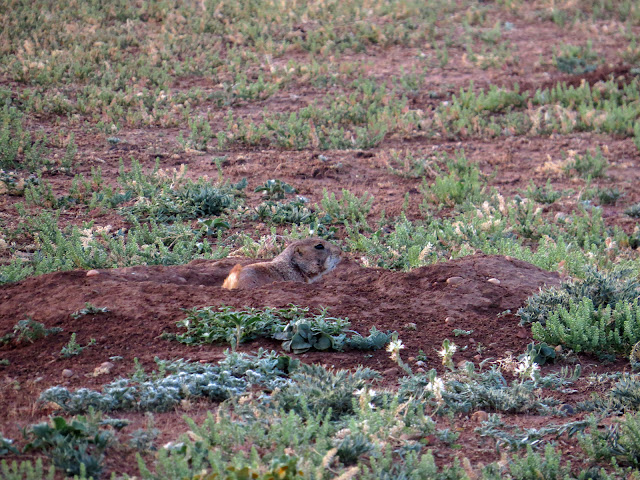 while I walked through the prairie-dog town that exists right there next to the busy campground, accompanied as I went by a constant barrage of warning squeaks and peek-a-boo popups, 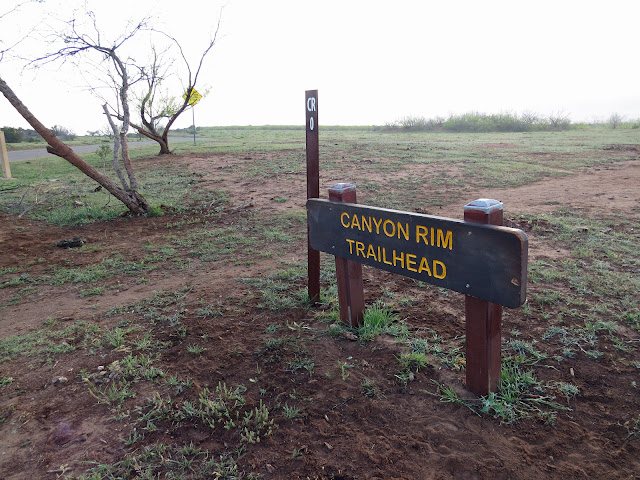 to the official start of the trail, 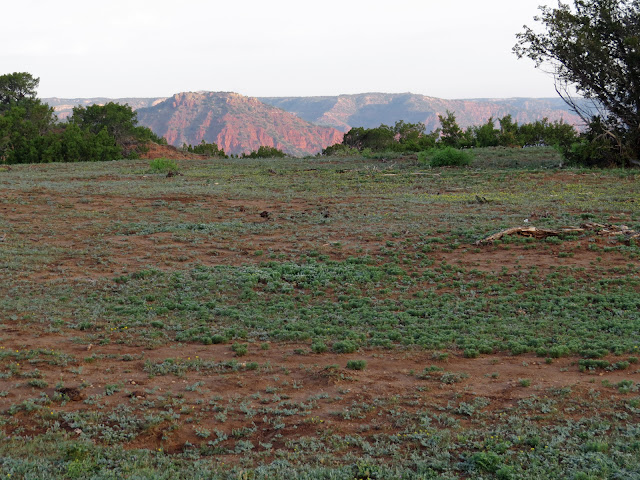 and began my day by hiking along the rim of Holmes Creek Canyon. 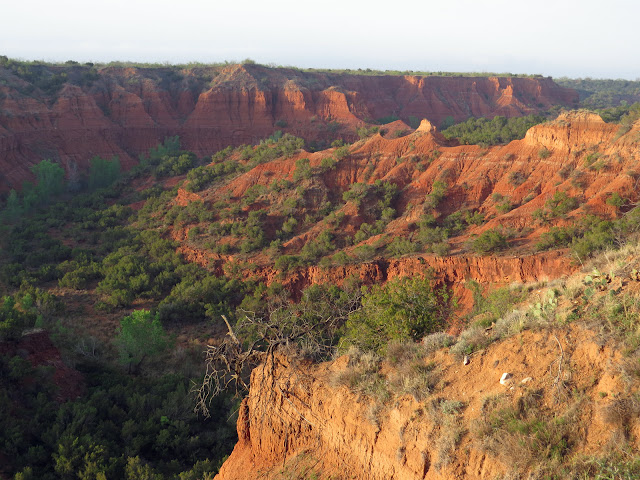 The views, especially when the light is right, are pretty dang good and this spot is easy to reach even for many of those that are mobility-challenged.

It's not far from parking-lot or campsite, 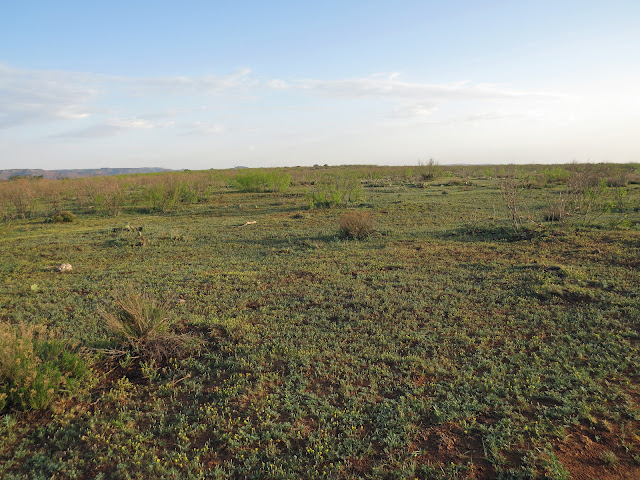 the terrain is flat, 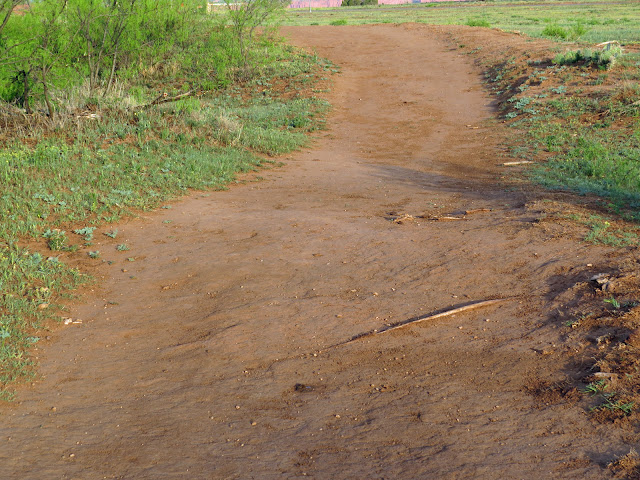 and the trail wide and well-groomed, 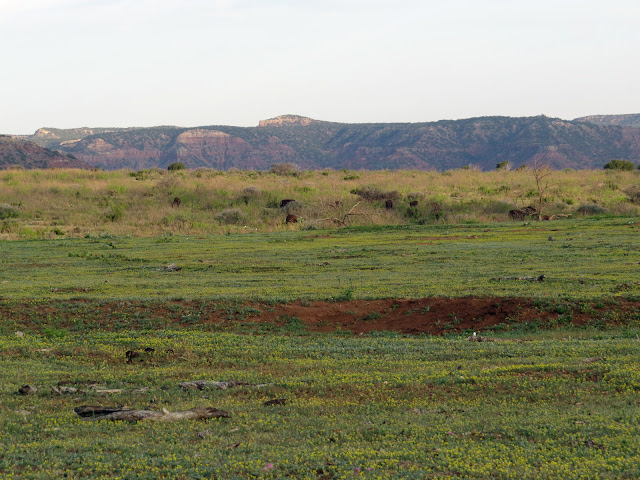 and for an extra bonus this morning, the Bison herd (all those brown blobs out there) seems to be up here on the rim, which means they are not down in the narrow confines of the canyon where they were hike-blocking me yesterday. 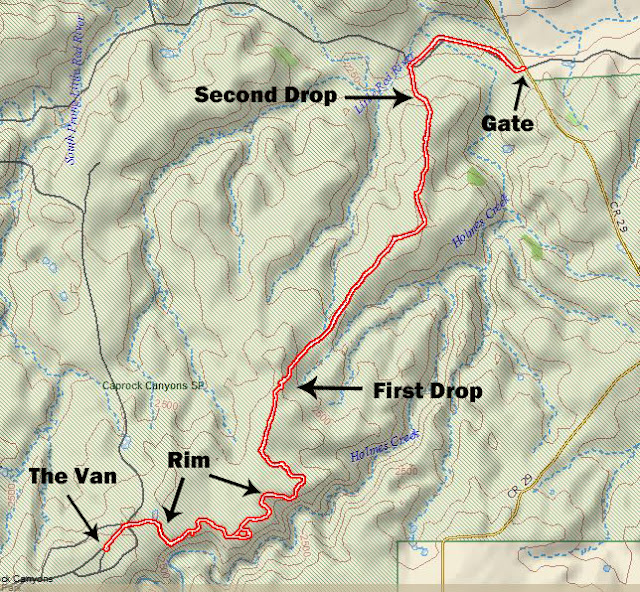 If you use your imagination, the ridge here looks like a three-fingered cartoon hand with the wrist up there on the rim and the fingers pointing off to the north-northeast. 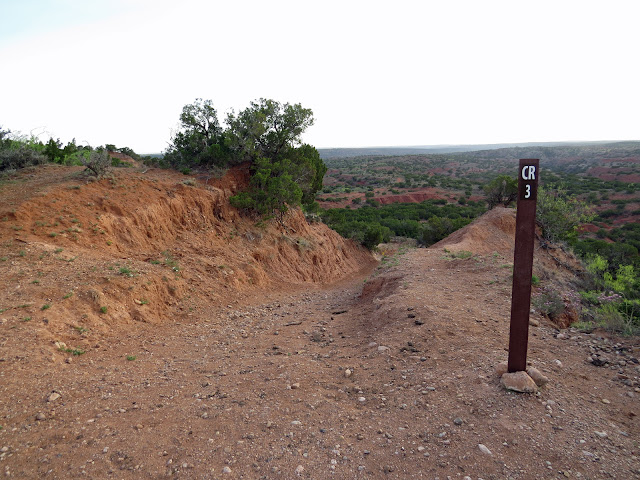 A mile and a half into the hike the trail threads its way between thumb and forefinger and begins the first drop.

A lot of people come this far then turn around. In fact there's a fancy bench just off the left edge of the photo for rest and contemplation before heading back.

With the Bison herd behind me I figured I had a pretty good shot at making it all the way to the gate today, so I went for it. 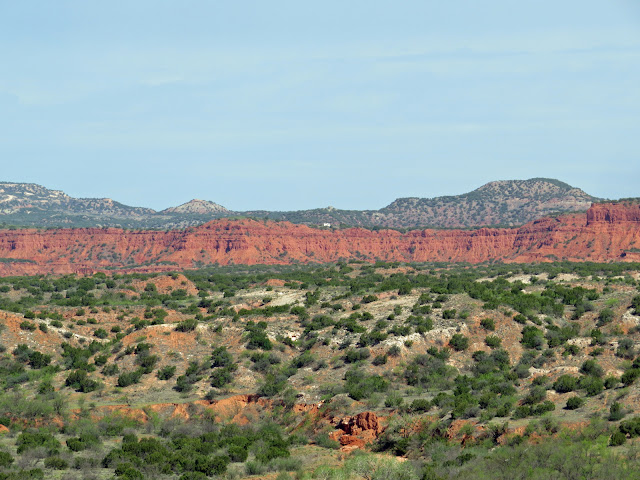 Between that first drop down from the wrist and the second drop off the end of the fingertip the going along the 'forefinger' is pretty easy.

The first time I took this hike and looked to the northwest from here I spotted what I assumed was an RV pulled into a park overlook up on the canyon rim out there in the distance. (White blob in center of photo) But I was clearly wrong because it was still lurking up there on subsequent hikes, including this one.

So today I got out my lensatic compass, shot some bearings as I hiked along, plotted them on my GPS, 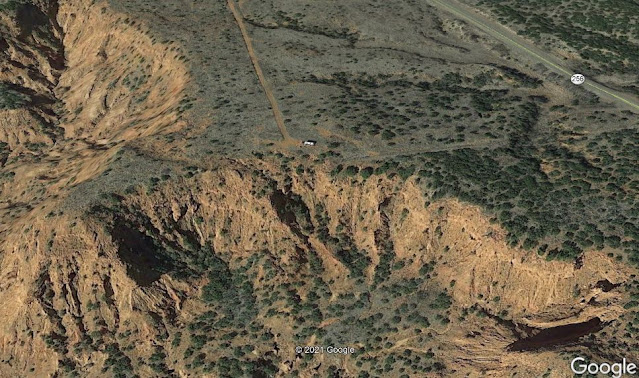 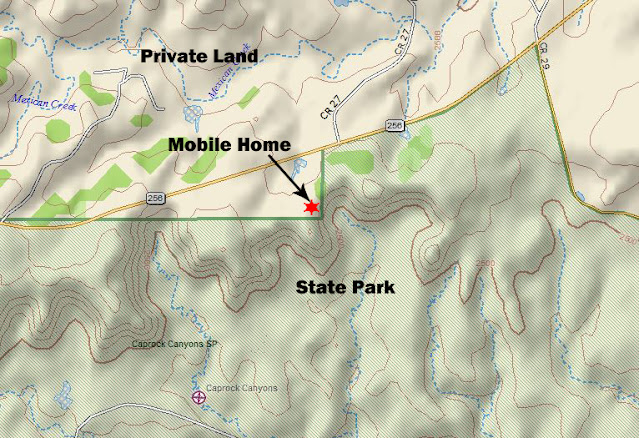 perched about 4 miles away on the north rim of the canyon just barely outside the park boundary.

Nice views! But I imagine the winds can be a bit fierce at times up there. 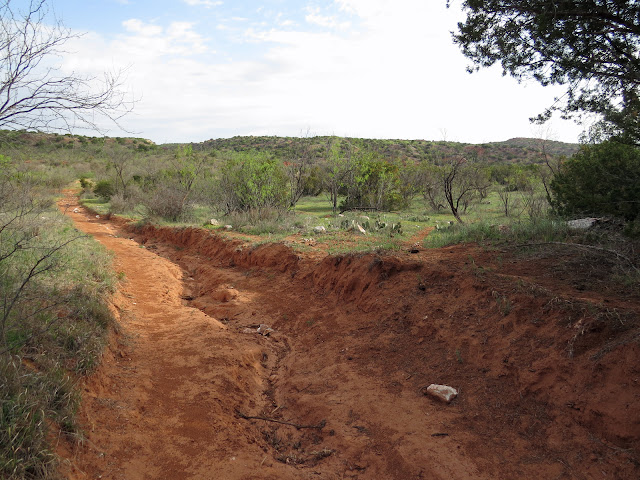 Which entailed continuing down into the canyon, past some seriously vocal turkeys that I could hear but never caught sight of, (On the way back I got a very brief glimpse of one turkey-butt.) 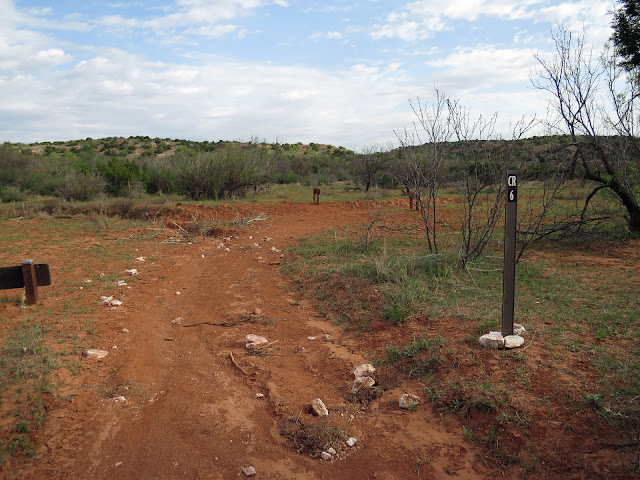 to the official end of the Canyon Rim Trail, Bison-free today, unlike yesterday, (that sign-post out there is the once surrounded by bison-babes yesterday) 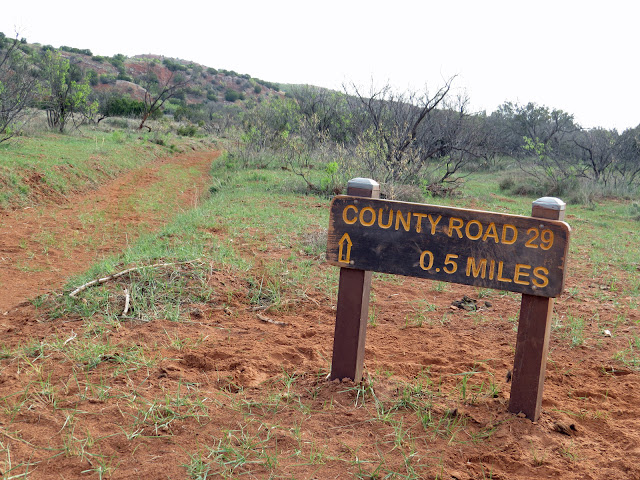 and on to the last little bit of trail before finally reaching the elusive gate out at the county road.

I know this sign looks a little worse for wear, but it's not really all that old.

You see all the churned up ground around the sign?

Bison like to roll in mud, dust, dirt, whatever they can get their hides on, then rub it off - hopefully taking some of the parasitic insects along with it. 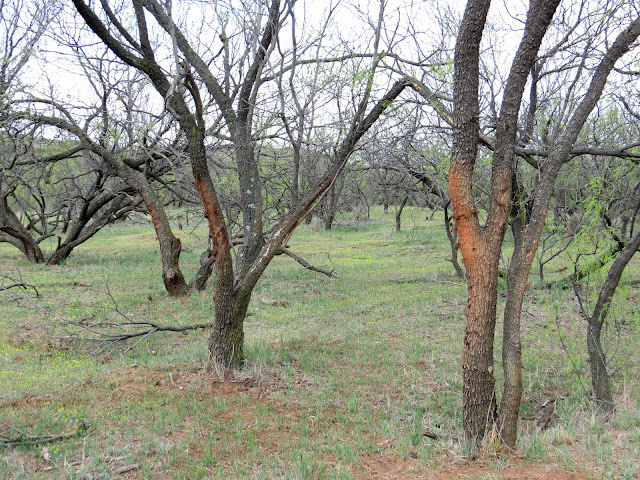 Usually they do this on the more natural elements of the landscape where the dried mud will hang until the next heavy rain, which could be a long time around here, but frankly any ol' post will do, including the expensive signs. 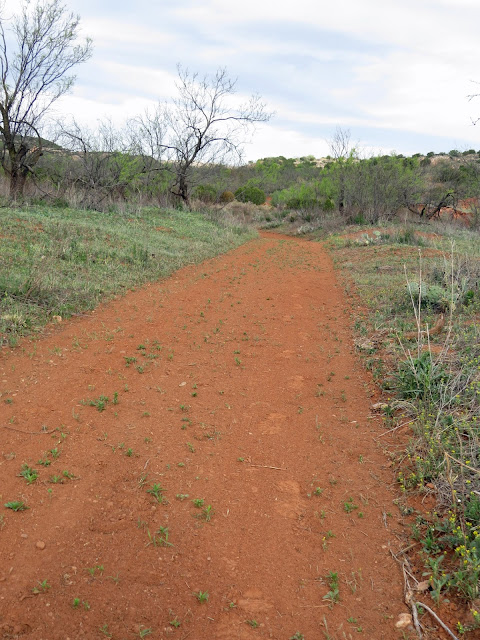 It wasn't heavy enough to wash the trees clean, but the rain that caught me out on the trail yesterday evening made it down this far into the canyon as well, gently grooming the trail of all footprints other than the ones I left today. 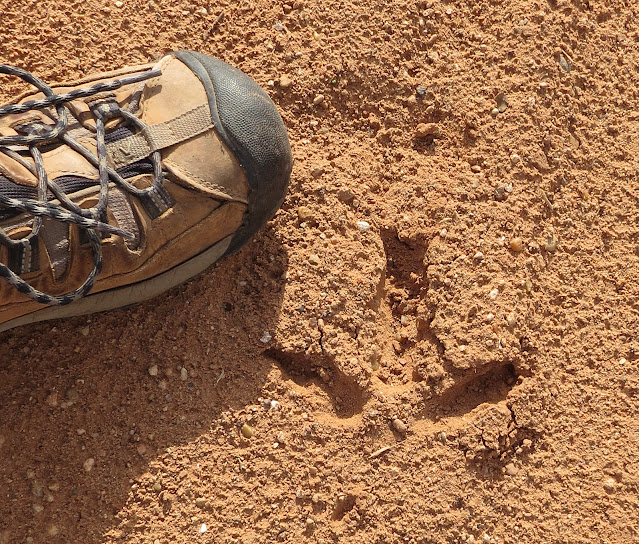 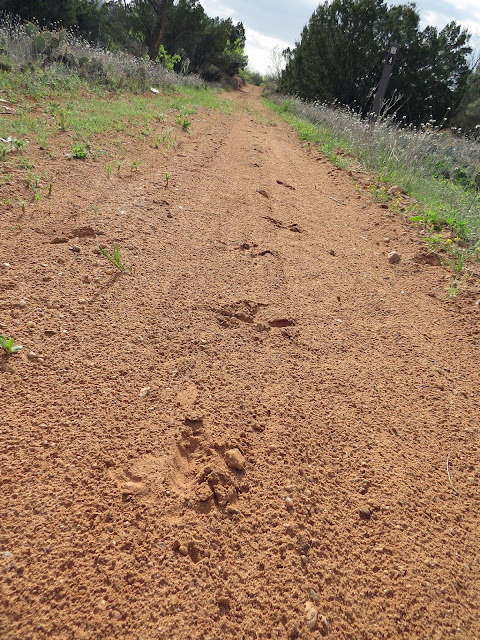 that at one point were tearing down the trail in front of me.

OK, So maybe they were turkey-tracks - but then again maybe not! 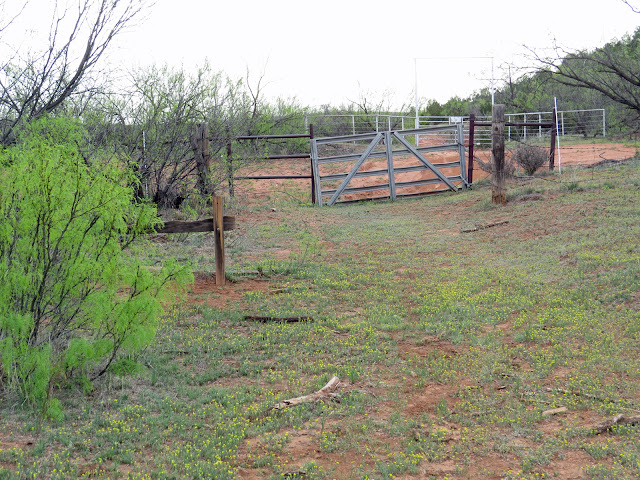 Yah-Whoo!
After a couple of thwarted attempts I finally made it 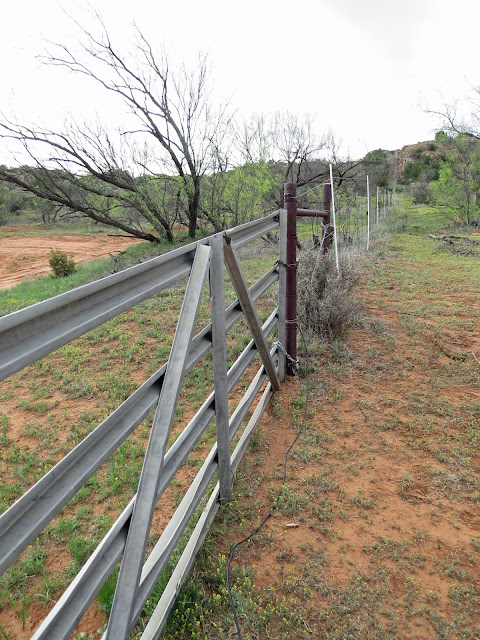 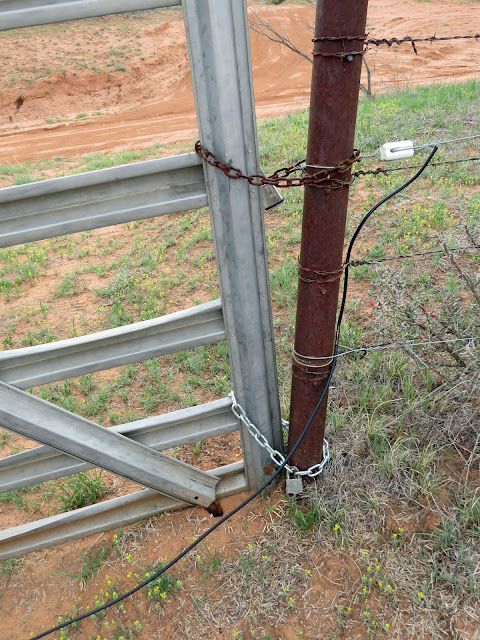 Which was double-chained and padlocked. 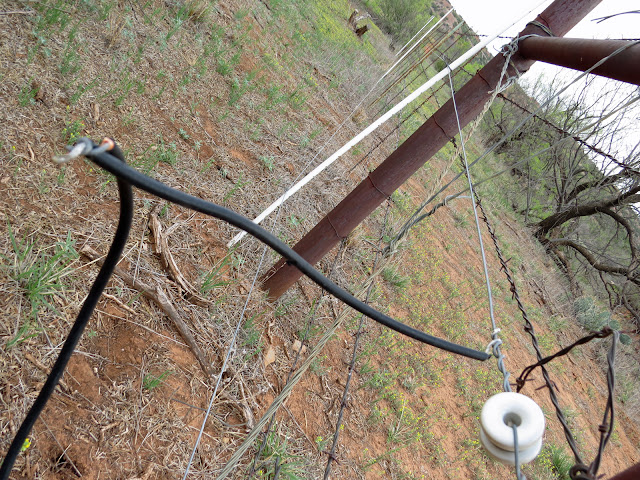 The fence along here is clearly wired, and no, I didn't check to see if it was live. With no one around to film the results and send it in for a possible $10,000 prize on a very popular show, why would I risk it? 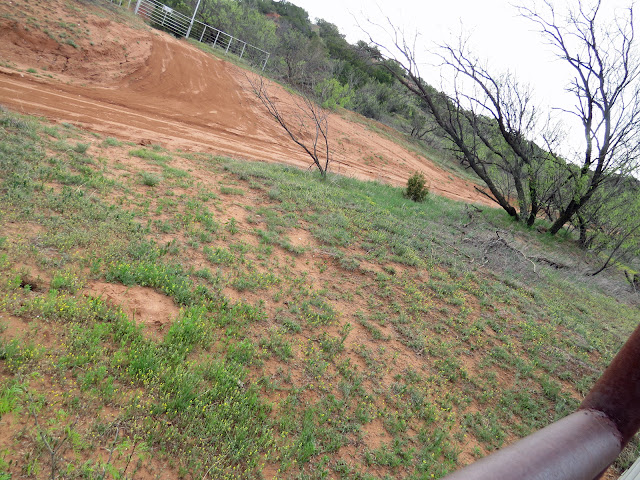 So it was with a great deal of care that I reached over the gate and got this shot of the county road with another - private - gate across on the other side.

And by that I mean in the next post. 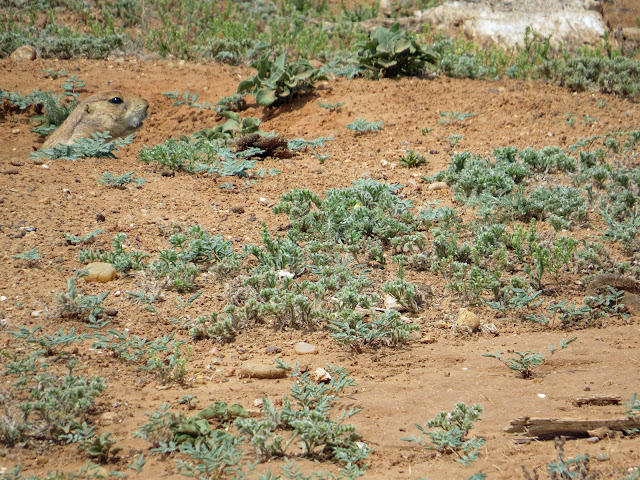 For now prairie-dog back-talkery neatly book-ended my hike as I made my way the last few steps back to The Van with one more thing checked off my bucket list.