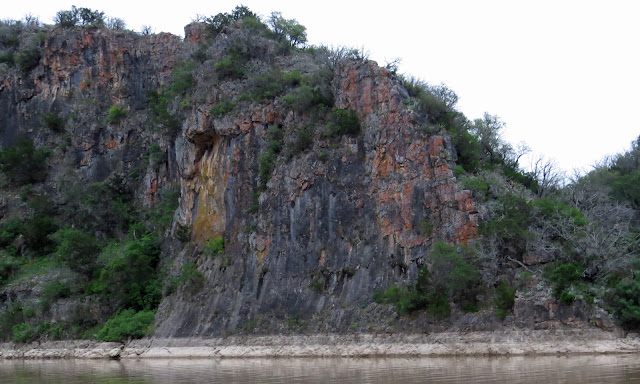 This morning (May 18) it is raining lightly here at Colorado Bend State Park.

Nothing like the torrential downpour with lashing winds of yesterday, at least not now just after dawn - maybe later when the sun has had time to stir things up, but still raining enough that I set out with my poncho draped over shoulders and pack.

The combination of light, diffused by the clouds and muted by the early hour, along with the gently dampened rock is certainly bringing out the colors over there on the other side of the river this morning.

Obviously it has been higher at times, but this is still pretty high for the Colorado River down through here, due in part to yesterday's storm. 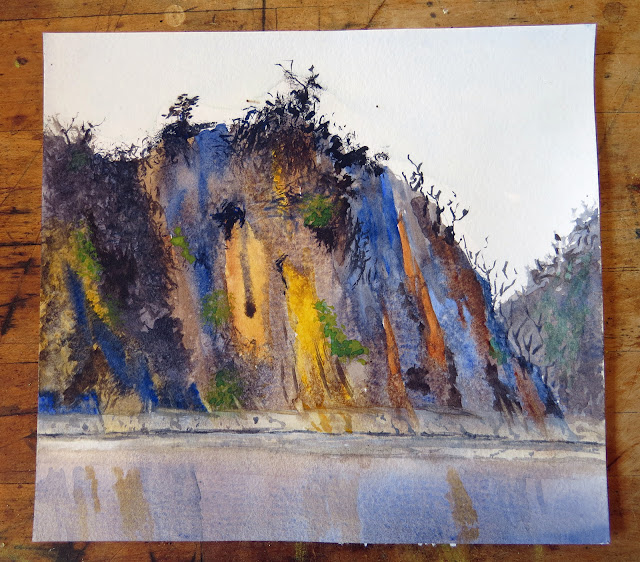 Yeah, OK, So I exaggerated a little. 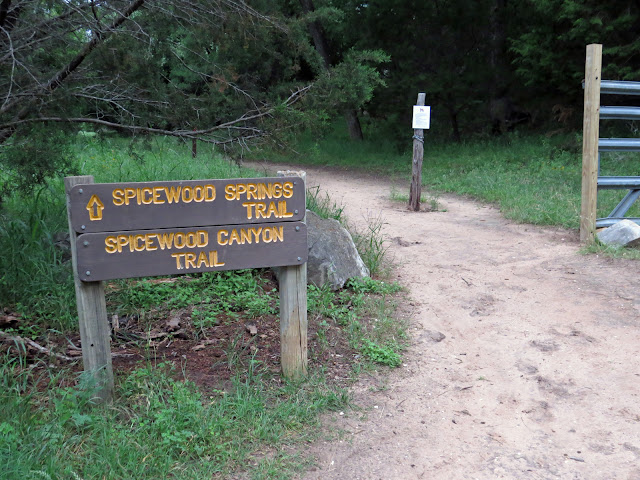 About a mile from The Van I reach the trailhead.

That white sign over there on the post is warning of cougars in the area and what to do and not do when you run into one, and we're not talking the two-legged kind-a cougar either, although I suppose there may be a few of those around too, but they don't bother listing the does and don'ts for that sort of cougar-encounter. 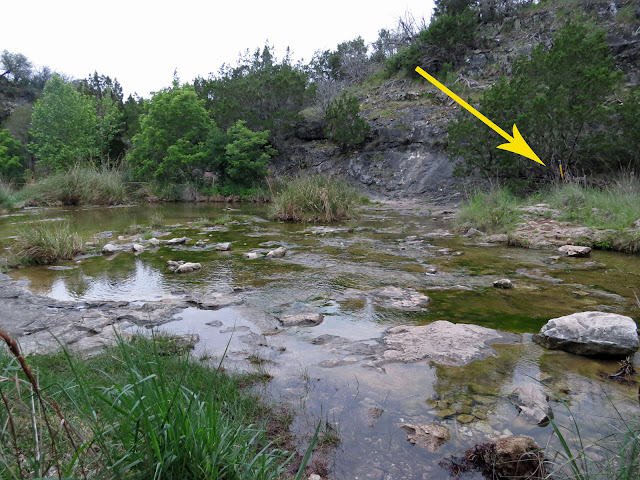 I don't have a lot of photos for today's hikes.

For one thing I was keeping the camera sheltered from the rain, and for another, Been here, Done that, Taken y'all along before, so in the interest of not boring myself with - well - myself, today's post is a highly abbreviated version of the day.

Yes, even though Spicewood creek is short and not as affected as the big river by recent rainfall, the water was still a little bit higher than usual, so the eight crossings of trail and creek ensured my boots, carefully dried out in the sun yesterday afternoon, were soon soaked again since several of the crossing were deeper than the boots are tall.

(That's a trail marker over there and I need to get from here to there, and do it all over again seven more times.) 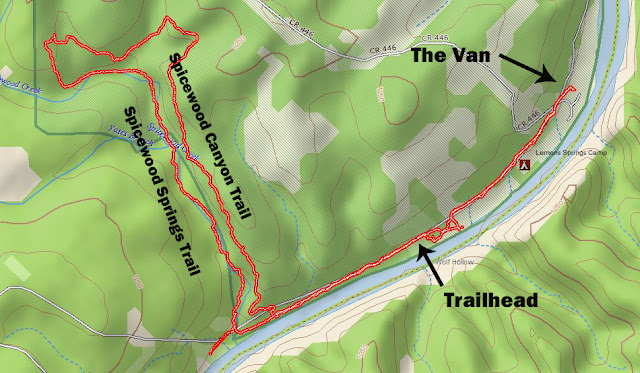 This morning's hike is up the bottom of the canyon on the Springs Trail and then right back down along the eastern rim on the Canyon Trail. 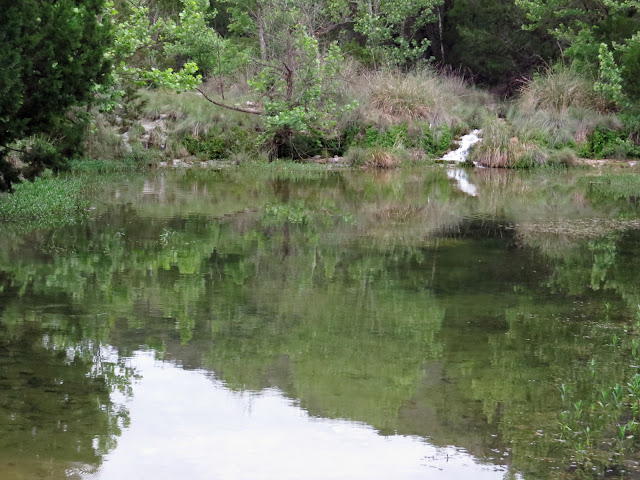 Probably due to the early hour and weather, I had the trail to myself today, which is not the norm, especially for this highly popular Spicewood Creek portion. 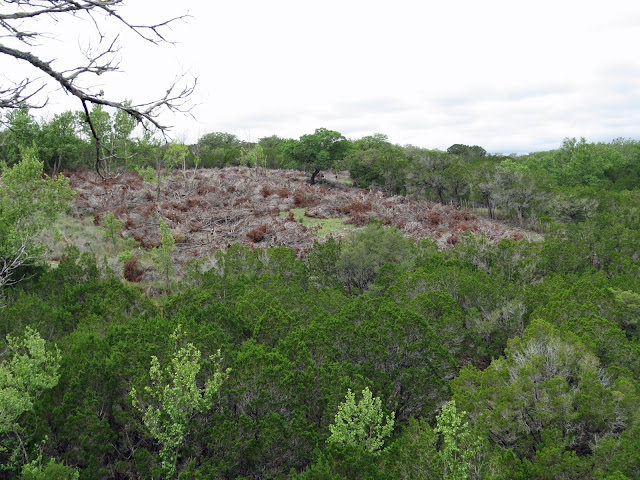 From the rim of the canyon it is obvious that the private land-owner over there on the west is either harvesting cedar, the economics of which are pretty iffy, or clearing some land. And the economics of that are even iffy-er since recovering the cost of clearing land by running livestock on the newly created open-land is nearly impossible around here today. 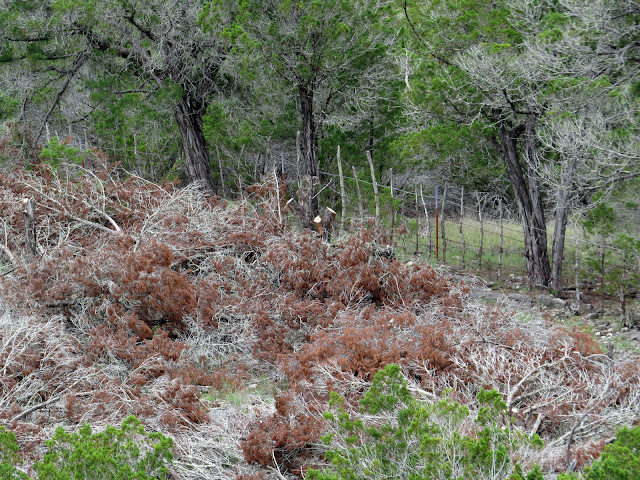 Maybe the land is being cleared for yet another McMansion! Let's hope not since that cleared land runs right up to the park border. 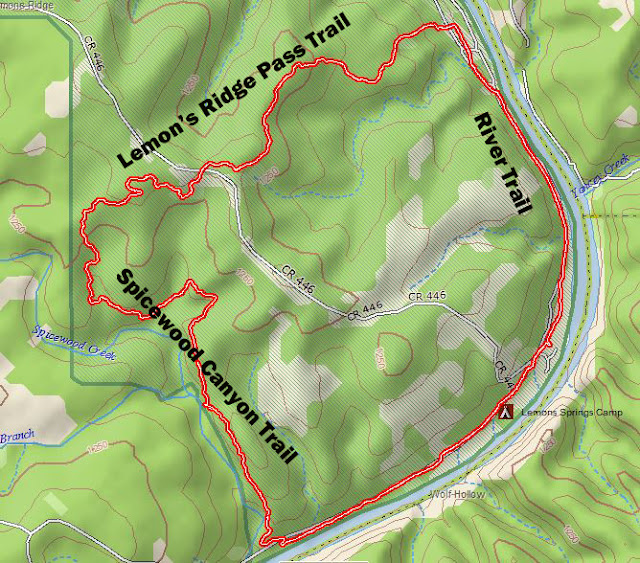 Even though I take my time, the modest morning hike has me back in camp before lunch.

Since it is beginning to look like the day is going to shape up to be drier than yesterday, and eating lunch out on the trail is always better than eating it back in camp, it wasn't long before I set off again.

This time I back-track myself up the Spicewood Canyon Trail, cross over to the Lemon's Ridge Pass Trail, and work my way down to the River Trail and eventually back to camp. 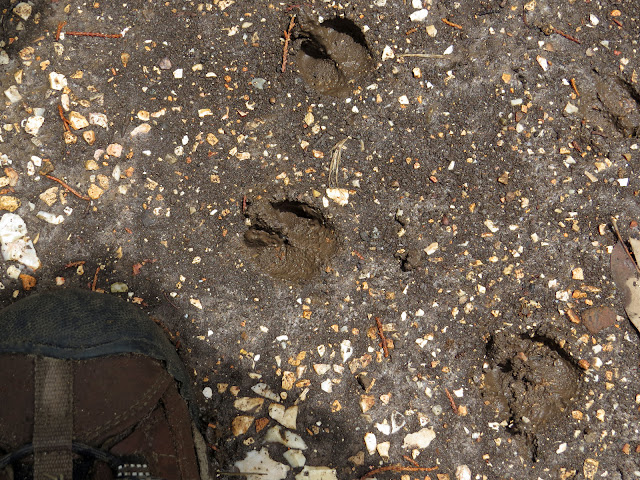 In case anyone thinks it sounds pretty boring to hike a segment of the same trail twice in the same day, even if it's in the opposite direction, this time I come across teeny-tiny little tracks that weren't there this morning. 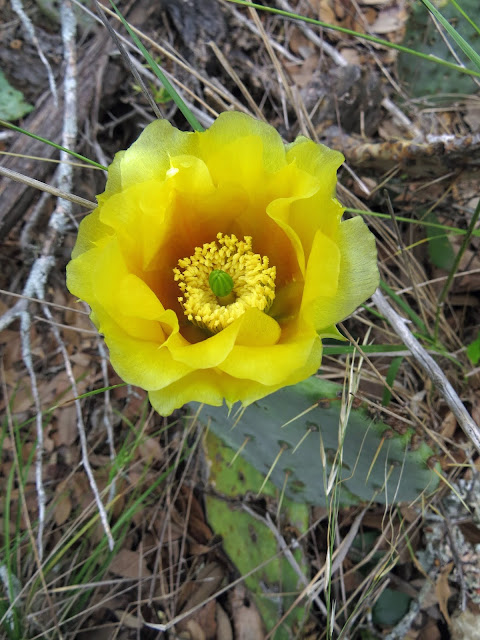 And though it's not full-on sun, the day has certainly gotten a little brighter.

Just look at that sparkle on the top-left of this Prickly Pear blossom! 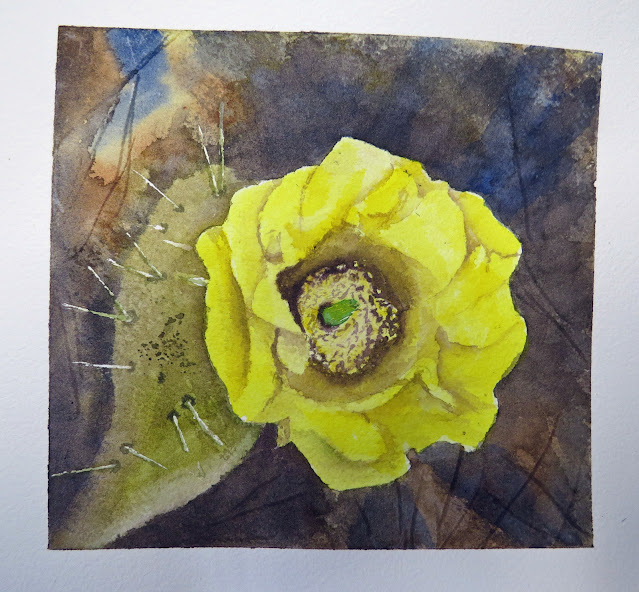 A sparkle I was not very successful in capturing in this painting.

In my defense, the Arches paper I used is more of a cream than a brilliant white.

OK, OK, So I'm not exactly an accomplished painter either - but I was trying to ignore that little fact. 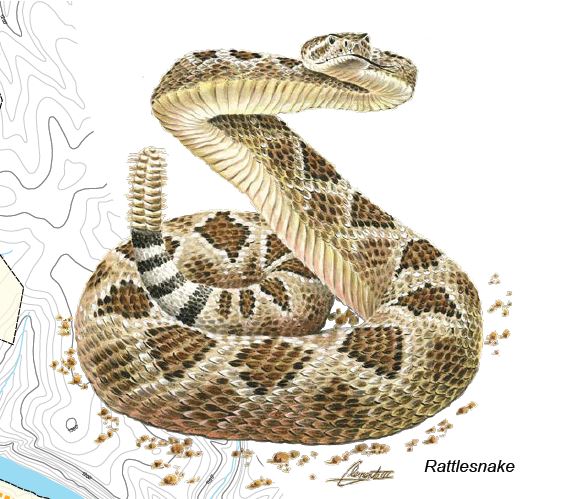 A rattlesnake, a Diamond Back, is featured prominently on the park's trail map.

When seen - or rather heard - on TV or in the movies the sound is always a distinctive rattle, but that's pretty much always the work of a Foley artist crisping up the sound in post production. If you listen close, all those rattlers in all those westerns are actually the same two or three snakes that have been previously recorded under just the right conditions.

In my experience, in real life, a lot of the time a rattler creates more of  a buzz than a rattle. So much so that my first thought is usually of a nearby cicada rather than a rattler.

In fact I was a step and a half beyond this guy tucked in there just beside the trail before it got through my thick head that maybe I wasn't hearing a large and noisy insect at all!

And don't worry Mom! I wasn't as close as it seems. Instead I used a little zoom then cropped the image even more. These guys can strike out over a third of their body-length. So this 5 footer can reach out nearly 2 feet, and do it faster than I can blink my eye, so that means I must keep - Oh, about a bazillion feet away! 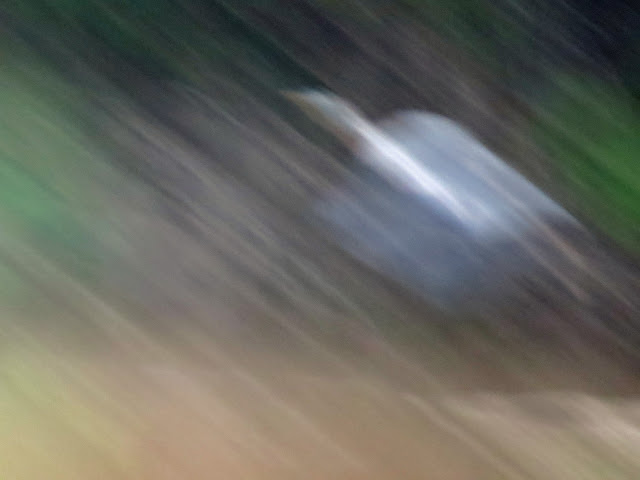 And I'll finish up today's hikes with this artistic shot of a crane taking flight down along the river.

Or is it just crappy photography?