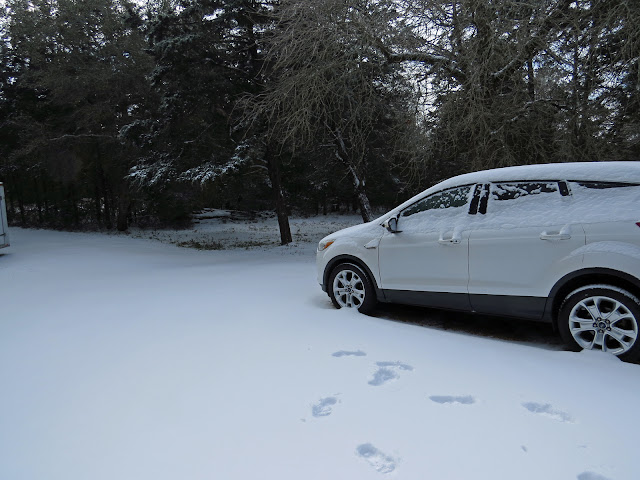 But it, this kind of weather, doesn't happen often. (Our average lows and highs for early February around here are 46 and 64 respectively.)

In the past 15 years here on The Property we've had 2 or 3 significant and maybe 3 or 4 wishful-thinking snow events and about the same numbers for icing events. 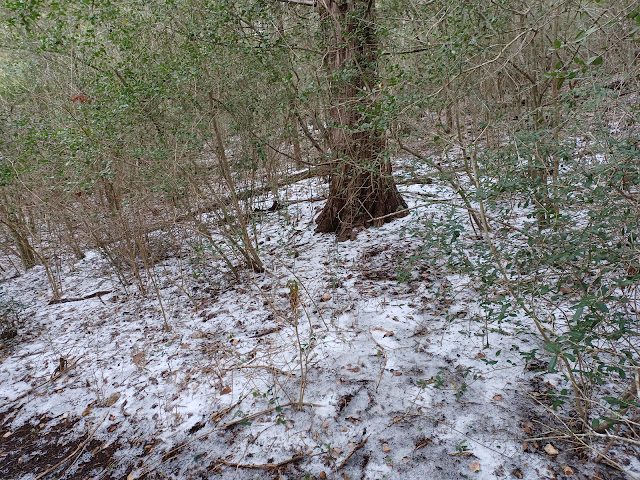 Well now we have another to add to the list. Though this one is difficult to classify.

It's certainly not as extreme as last year's, but it has been a mix. Rain turning to freezing rain to sleet and even a bit of actual snow, all layered up in a treacherous, crusty skin on anything exposed.

This time around we've been below freezing for 18 consecutive hours and it will be tomorrow, about 36 hours, before we will, briefly, make it up to 35 around noon under cloudy sky's before the freeze settles in again. And, according to the forecast, we have another 5 or 6 below-freezing nights coming on the heels of that.

I'm all too aware that many - many, many - places are dealing with far worse than this little bit of hardship. If you can even call it hardship.

No. This post is about confronting unsettling reminders and finding peace with them. One of the sweet blueberry's embedded in this thick, bitter batter is the fact that I can - legit - drag out my trusty wool gloves.

The ones that do a surprisingly good job of keeping my hands warm - ish - (Let's be realistic here!) but leave me with the dexterity to do my chores, and even type on a keyboard, as I'm doing right now in the 45 degree barn, practice on my new kalimba in the chilled tin-can of The Van as the blustery wind rocks her, and troll through the 1440 daily news digest on my phone while sitting out in the open on Dad's bench. (I'm pretty sure I'm getting worse and worse about not wanting to be inside any more than I have to.) 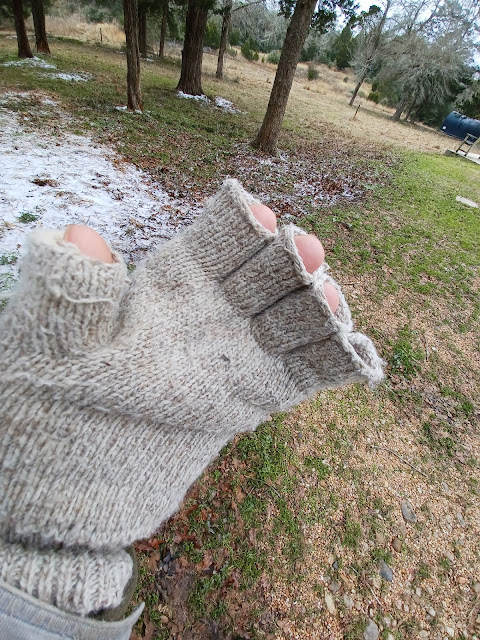 Being wool, they keep my hands warm - ish - even when wet. And when I don't need my fingertips I can turtle them by quickly shaking the gloves down an inch for even more protection, 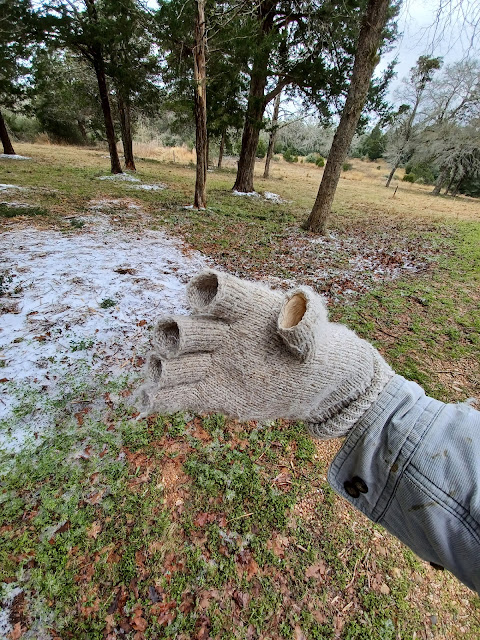 or even pull those delicate fingers completely out of their individual tubes and curl them into my palms for extra heat conservation. 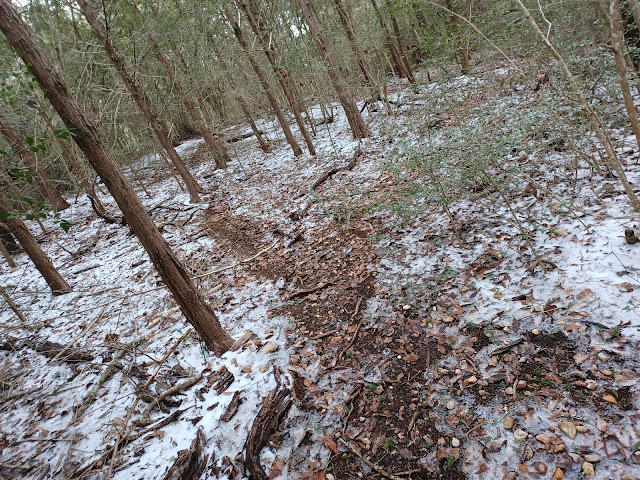 But I digress - I know. I know - once again. (Digression seems to be my natural state.)
So back to the point:
I wasn't alone as I hiked the property today, despite the conditions. 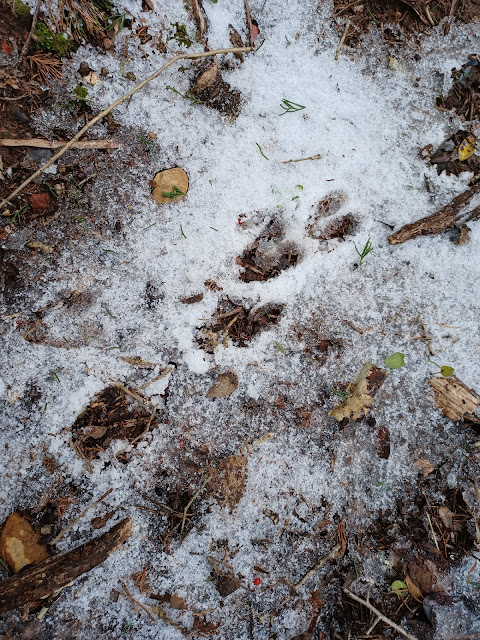 The deer were also 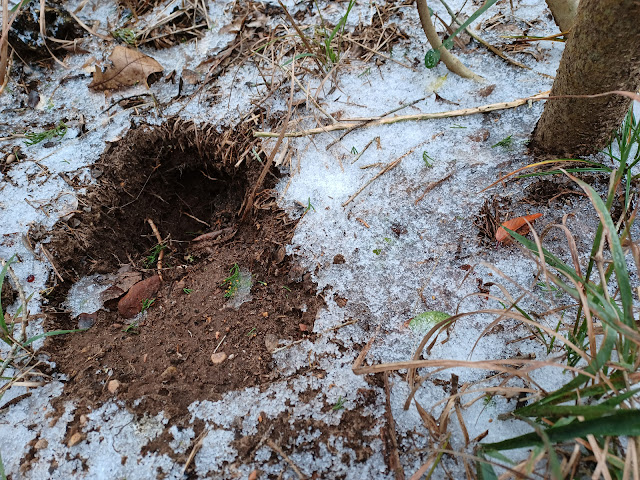 Non- browsers, in this case skunk, possum, or armadillo had, at least until I disturbed them like an off-key Mariachi trolling the tables in a restaurant, been feeding, 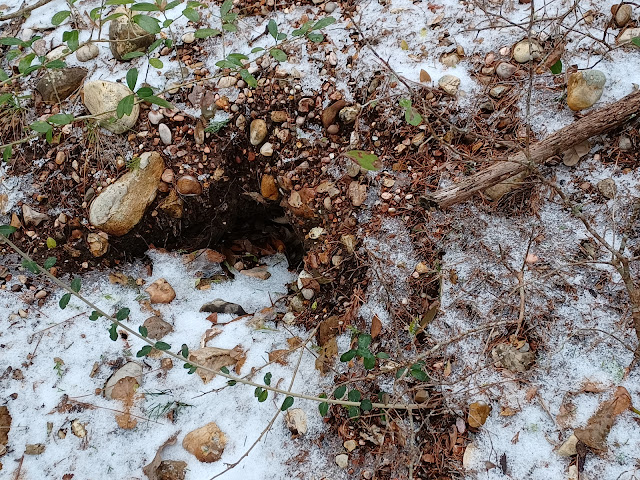 and den-dwellers had been - well - dwelling.
(Unlike me, apparently the inhabitant(s) of this particular den don't get all antsy if kept under a roof too long and feel compelled to get out and wander even in less than ideal conditions!) 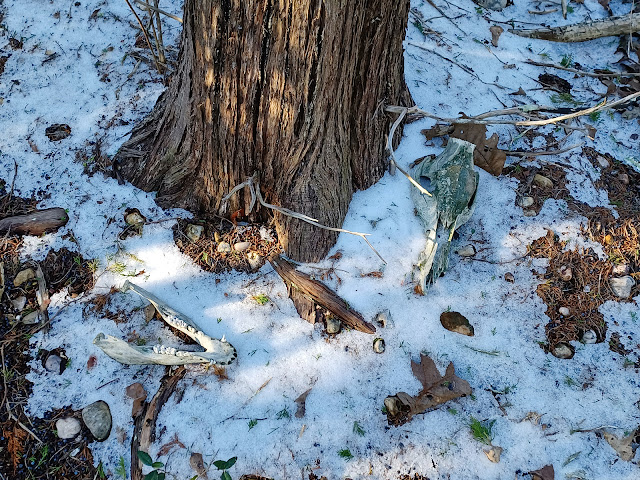 But as I approached the T-intersection of trails at the back of the property, all too aware that I was bundled up in a base-layer, over-shirt, jacket, neck-koozy, scull-cap, brimmed hat (Despite the sunlight in some of these photos, it was still blustery and sleeting/snowing some of the time) wool gloves, and wool socks over silk 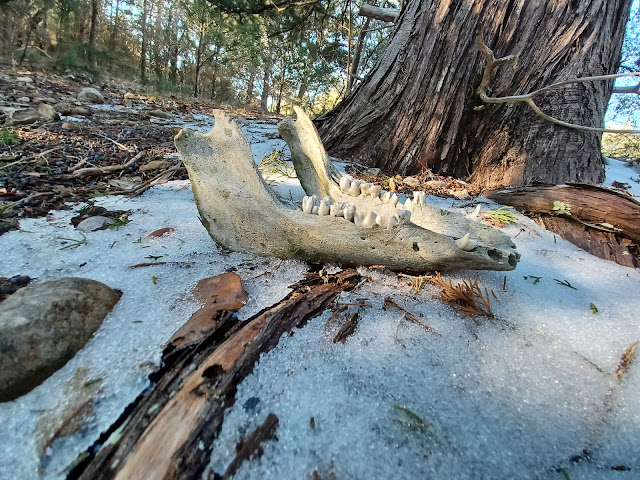 my mind was unwillingly drug back to when I was growing up in the north when conditions like this would have been nothing more than a nice spring day and I wouldn't have given them a second thought, let alone a coat and gloves, until forced to change my pants when I came in because I'd soaked them through with my exuberant play to the point of being icy around my lower legs.
Not that memories of those days are bad or anything, but they do inadvertently serve to point out the realities of the present. Because of those memories I couldn't hide from the fact that today I'm shivering, I'm flinching at the bite of cold on my cheeks, my neck is crunched down between my shoulders, my fingers curled into my palms, fingernails biting as I cringe at the thought of having to deal with this for the next several days.
Because, unlike my youth, today the cold hurts!
What's wrong with me?!
What happened between that oblivious childhood and this aching now? 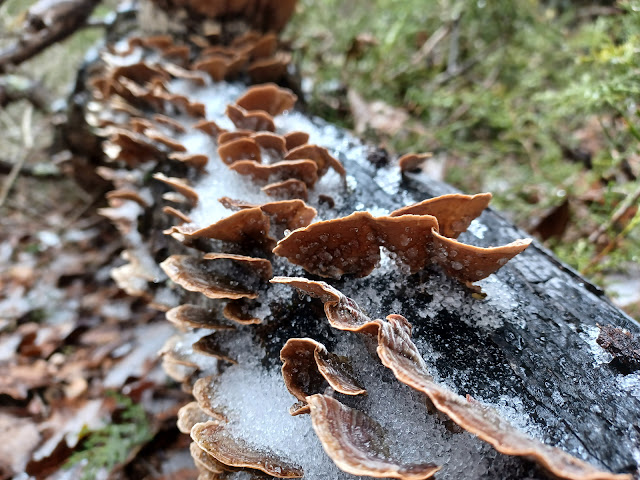 OK. Anyone over the age of 50 knows exactly what happened.
Time happened.
That inexorable sweep of the hour-hand that looks like it's going around in innocent, lazy circles but is, in fact, spiraling fast down the passage of time.
Lately there's been a lot of these sorts of unavoidable time-passage reminders.
Cuts linger for weeks instead of days. Injuries can no longer be walked off but must be coddled and nursed. Skin that I've never really paid attention to before now needs to be moisturized daily lest it flake off like frosted bits of - well - me! And the litany goes on. Each one adding, like the beat of Poe's Tell Tale Heart, additional volume to the inevitable.
But just as I was letting this litany of woe shove me down that passage of time even faster than that spiraling hour-hand, I came across this nursery-log.
In its time this oak was a towering matriarch of our little patch of woods here. Rising tall and strong. Converting sunlight to energy and absorbing carbon as it grew ever taller and more robust in the natural seasonal cycling of these things. And in turn providing shelter and food and oxygen, and procreation, to the whole community around it.
But eventually the telomeres protecting the ends of her DNA strands got more and more ragged, just like the aglets on the ends of old shoelaces, and that phase of her journey couldn't be sustained any longer. But this is still within her time and as she produced fewer and fewer leaves in her declining years she was allowing more sunlight to get down to the next generation of oaks that had been sheltering under her protection so that a select few could begin their own journey to towering and strong.
And even when this matriarch fell she converted herself into a nursery for the thousands of fungi and insects and billions of microbes that are just as crucial, as she still is, to the continuation of the natural cycle.
I'm reminded that her falling, just like my waning tolerance for cold, is something to be noted, but not to the point of eclipsing her continuing value and purpose.
Once in a while I need a simple little nudge like this to steer me back on track.The track where I accept and adjust to that which is inevitable but never lose the wonder and joy of participating in this journey.

So as the breeze carries the distinctly wild, slightly pungent smell of a couple of my neighbors across the pond I breath in deep and give myself permission to marvel at the beauty of the morning instead of bemoaning the sharp bite of its chill in my lungs.
As one of the characters in the Telanovela I'm currently watching (Only for the practice!) often says, while sweeping his hand up across his face and flicking his fingers as if he is waving away an annoying mosquito "Fuera el dolor. Vaya a vivir." - "Out with the pain, hurt, regret, grief, sorrow. (dolor is a widely encompassing word) Go live."
(This particular Telanovela is older than the song Fuera el Dolor by Adan, Xavi, y los Imanes so I don't think the soap-writers stole that from them. And no. I have no idea what the hell the chicken is doing there in the video!)