The Good, The Bad, and The Irony

And before anyone goes all postal on me - yes, I am knowingly using the highly controversial Situational Irony in this instance, so spare me the long running debate on the proper - and improper - usage of irony. 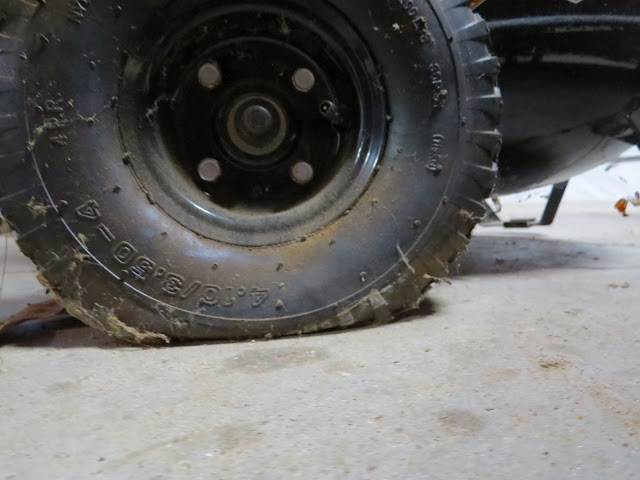 Is it bad that I have a flat tire on my air compressor?

As consumers I believe we have a moral obligation to ourselves, our society, and our planet to take proper care of what we have, no matter what it is, in order to make the most out of the money it cost and the resources the manufacturing and shipping of it consumed.

I'm usually pretty good about that. Hell! I'm still wearing work-shirts I had before I retired 10 years ago. True, the sleeves have been cut off to repurposed them for retired life out here on the property and most of them are seriously sun-faded, paint and glue spattered, and well-frayed around the edges, but they're still serviceable. As The Wife pointed out just the other day after we had watched a short segment about the Paris Commune revolt in PBS's Around the World in 80 Days - "The way we dress nobody would ever mistake us for people with money!"

But I'll admit that I could do better sometimes. And this! Letting a tire on my air-compressor go flat - the first step to ruining a perfectly good tire - is not only situationally ironic, but very, very bad!

On top of that I had recently let all the air out of the compressor's tank, so short of getting the stomp-on manual bicycle pump out of The Van I was pretty much stuck at the moment. 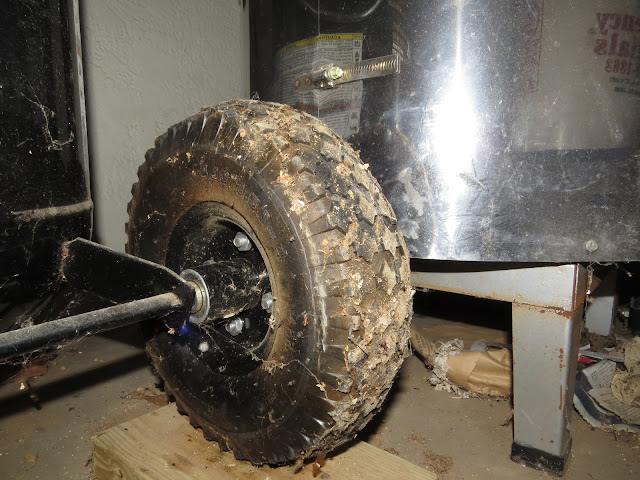 So that covers the Bad and the Irony, but what about the Good?

Well this is the same tire about a week after I finally got it re-inflated, holding air and doing its job. Obviously I didn't ruin it - this time - and that's good. 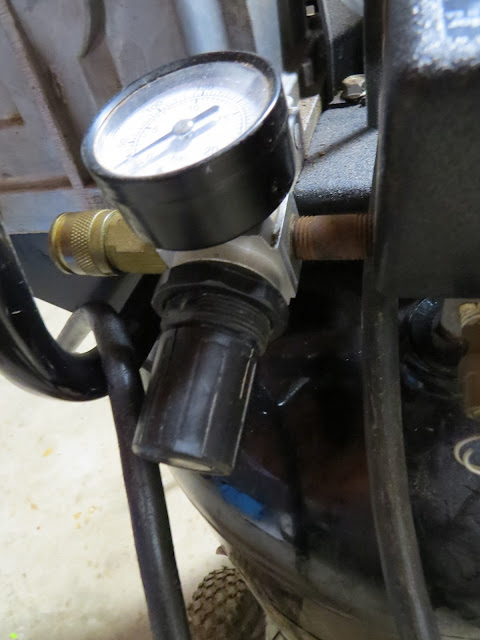 This is the reason I let all the air out of the tank in the first place.

That little gizmo with the black knob and gauge on it is the regulator.

It determines how much of the 150 pounds of air in the tank are allowed through to the air-hose. 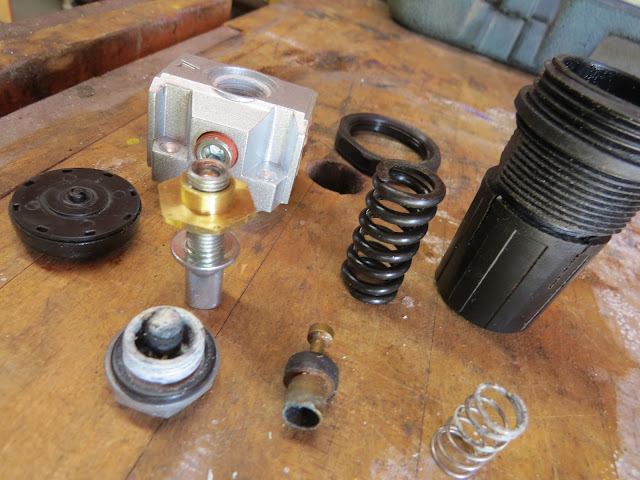 Pressure regulators have been around, largely unchanged, for a few hundred years.

It's a relatively simple device where pressurized gas or liquid enters the input side of the aluminum block (top left) where, encouraged by that silver spring, (bottom right) a small piston (bottom center) pushes up to seal off a port between the input and output sides of the block. On the other side of the port that large black seal (left center) tries to open the port by using the little nubbin in the middle to push down on that brass extension of the small piston.

The harder the black spring pushes the more pressure required in the output side of the block to push the black seal back far enough to close the port again. 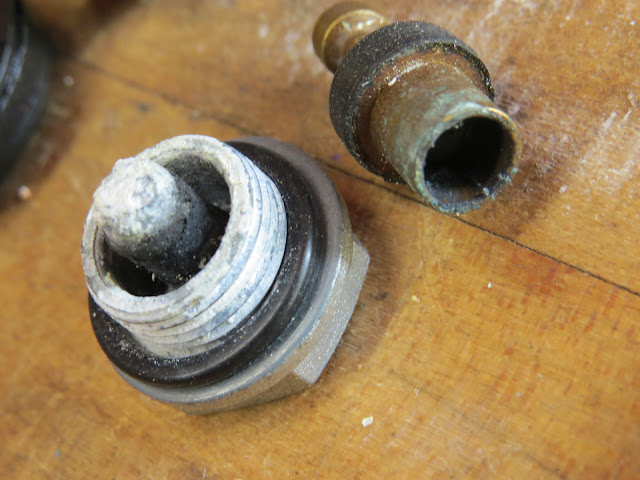 As you might guess from the state of the housing that guides that all-important piston, my regulator wasn't regulating anymore.

Instead the piston was never closing the port which meant I had a full 150 pounds of pressure on the output side of the regulator. Not only is this kinda hard on the piping and hoses, but it also made using the quick-connects a bit challenging!

In addition to that, the large black seal wasn't sealing in the bonnet properly anymore which meant that pressure was perpetually hissing out through the adjustment-knob assembly.

Now I know I could have bought a rebuild kit for less than $30 (less that $20 for a junky kit) but understanding how a regulator works doesn't necessarily qualify me as a competent repair-er of said regulator, so for less than $50 I bought a complete replacement.

I count that extra $20 as insurance towards getting the job done right the first time. 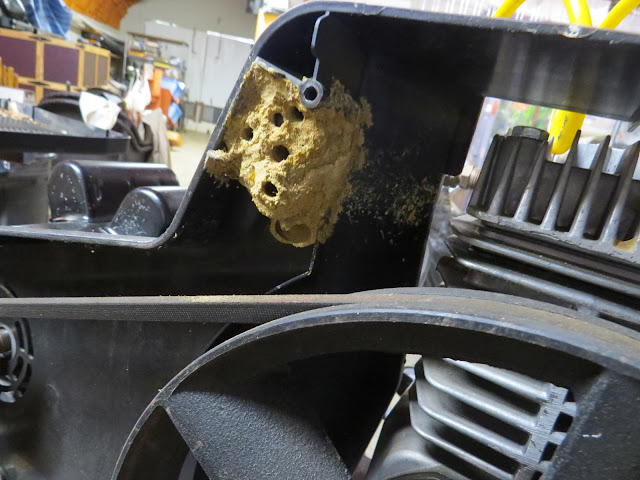 And while I had the compressor out to replace the regulator I took the opportunity to remove the shrouds and give everything a good overall cleaning.

Mud-daubers are a fact of life out here on the property and they have a habit of building their fortresses in any little nook or cranny they can get to and the longer you leave a nest the more it encourages them to enlarge on it. 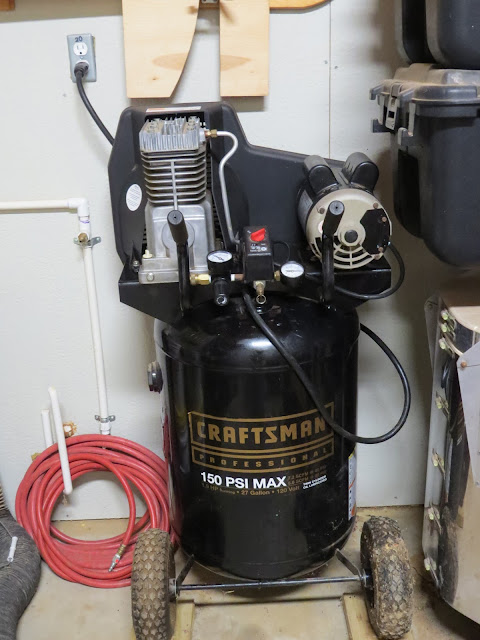 With everything cleaned up, the new regulator installed, and that tire aired back up, with the supreme confidence of the ignorant I rolled the compressor back to its normal station. (It lives up on those blocks to make it easier for me to reach underneath once a month to the valve that drains any water out of the tank.)

But with the caution of a skeptic I didn't hook the compressor back into the piping system right away (that fitting in the pipe just to the left of the air-pump's base.) and with a full charge in the tank I turned off the main switch.

Though they look like they could be one and the same in this photo, the compressed air piping terminates just behind the rolled up air-hose in a ball-valve I use to drain water out of this end of the piping (there's another one in the far end of the piping on the other side of the barn as well) and that white 'pipe' holding the air-hose is actually a modified and reoriented paper-towel holder. Confusing the issue even more is what looks like a bit of brass plumbing just above the coil of air-hose. Actually that's an oddly placed mud-dauber nest. 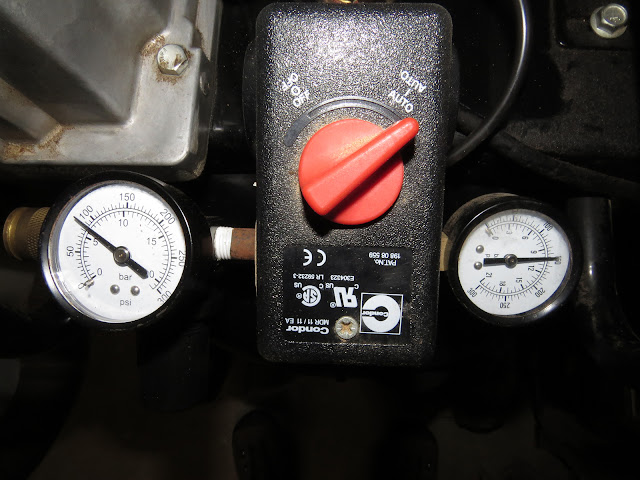 But three days later the pressure in the tank was still holding at 150 pounds and the output side of the regulator at 90 pounds, (The Van's rear tires take 70 pounds which dictates the pressure I need out of the compressor.) so by the luck of fools I must have got this job done right the first time!

So I turned the switch on, re-connected the compressor to the barn's piping system, and called this job done.

Now all I have to do is recover from the shame of that flat tire!