The Paul Bunyan Pucker-Factor They Don't Talk About! 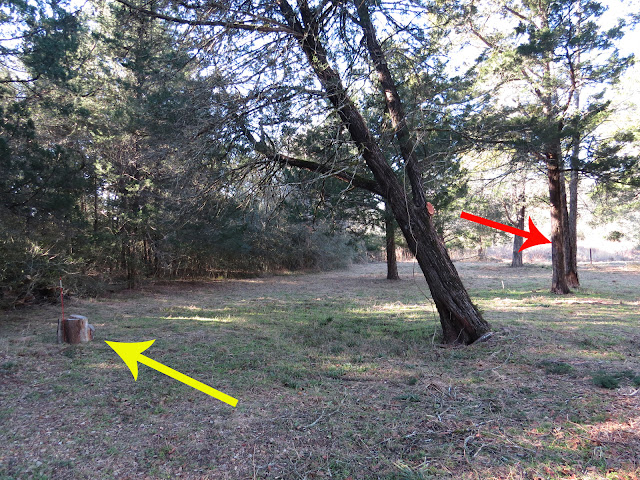 You see that tree there in the middle?

Well it is, but in very slow motion. Somewhere along the lines of 2 or 3 degrees per year for - well, to be honest I haven't been keeping track.

In fact I was doing a damn good job of ignoring this slow-motion disaster, right up until The Wife found a tiny little replacement-tree wan-a-be she took a shine to there at the yellow arrow and she made sure I realized that it was in danger of being squished.

I scrounged a few rounds of log left over from taking other trees down and built a little fort around it,  but even through my loyal veil of self-denial I could see that wasn't going to cut it, (Oh look! a pun!) and that death-tree was going to have to come down before it inadvertently squashed something important - or maybe even me.

On top of that, once I got to looking I found that there were three other trees, two at the red arrow and one more off to the right, that also looked suspiciously like thugs waiting with raised bats in the shadows of an alley ready to do damage at the first opportunity. 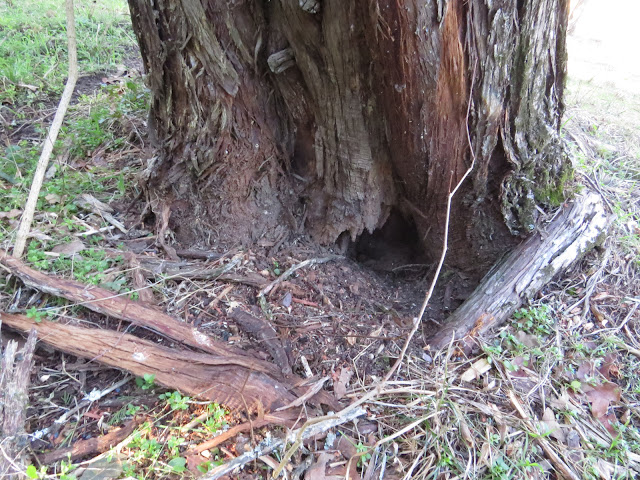 In fact, the closer I looked the worse the situation got!

This is the up-hill side of that leaning tree and obviously things here are no longer on solid footings! 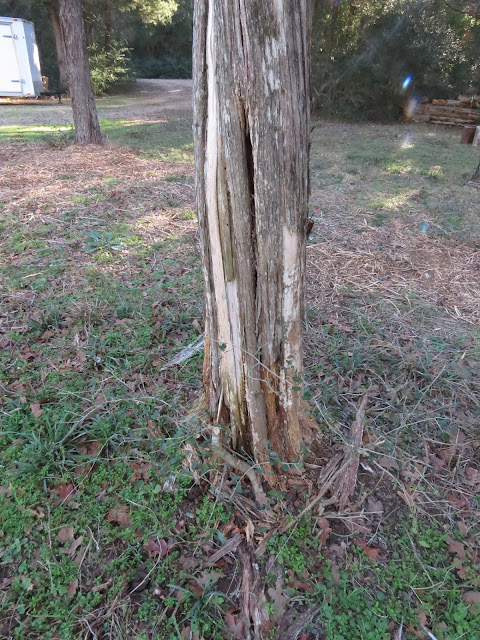 This is the tree off to the right of the first photo.
It looks like it could be just pushed over. (I tried and couldn't, but the wind can push a lot harder than me when given the opportunity.) 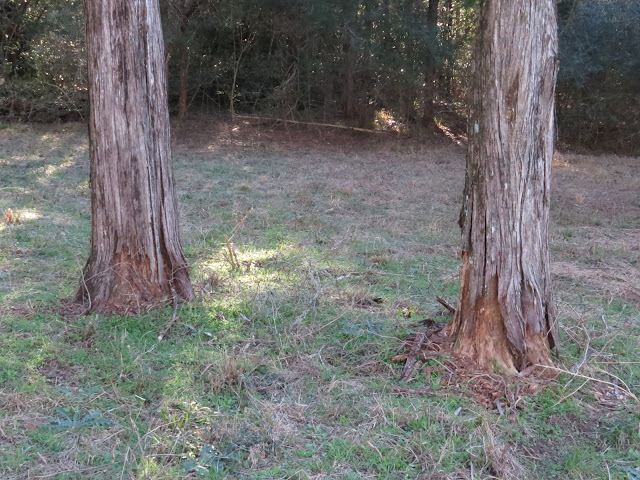 And here are the other two thug-trees.
Clearly not the most upstanding and stable citizens of this little community.
Anybody remember that late 70's movie The Warriors where a small group had to work their way across New York City by negotiating the territories of a whole bunch of different hostile gangs in order to get back to their home-ground?
All the sudden I kinda felt like that when out there in that little patch. (Ahhh for the good old days when ignorance is bliss!)
To remedy this situation I tried to locate the Blue Ox and her companion - but couldn't find them anywhere. Instead I had to hoist up my big-boy panties all by myself and deal with some serious pucker-factor as the implications of the job. - you know, thousands of pounds of ready to fall wood lurking over my tender head - started to affect the ability of my heart to beat properly. 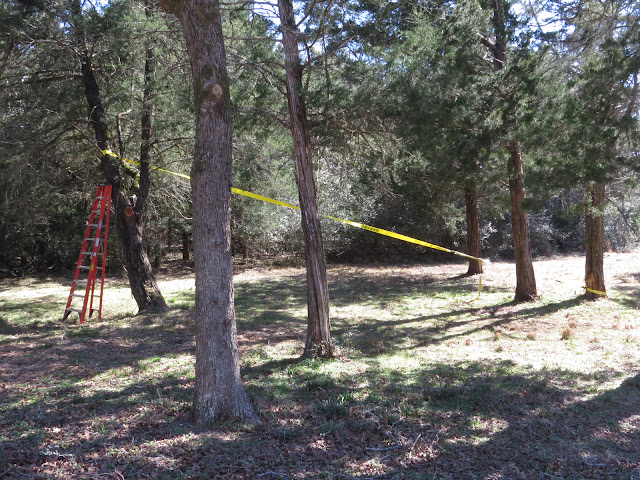 In order to save The Wife's newly adopted seedling I really needed to make that big tree come down about 20 degrees to the west of where it clearly wanted to go.
So I got the snatch-strap out of The Van, wrapped it around the tree as high as I could safely get it,   (although safely is a relative term about now!) and anchored the other end off to the base of one of the other trees I was going to take down anyway (No worries about damaging a good tree that way) 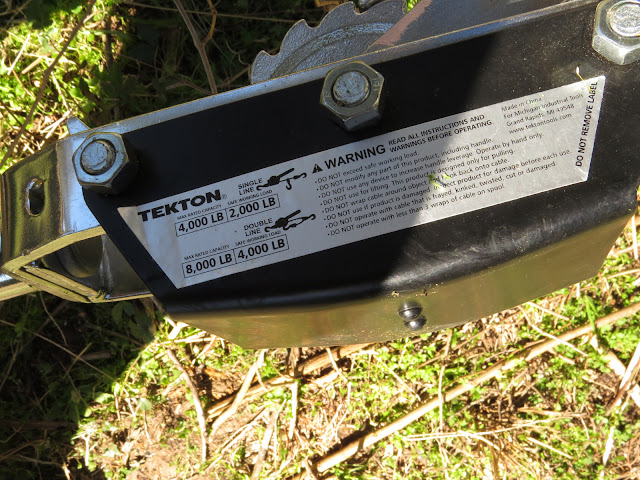 with a come-along. Then set to work putting some snatch in the springy snatch-strap by cranking on the come-along configured with the turning block to the 8000 lb mode.
Note that that's the max capacity and the safe working capacity in this mode is 4000 lbs. I could tell by the degree of pucker in my nether-regions as I heaved my body-weight against the lever that I was exceeding that safe capacity one click at a time! But that was one hell of a lot of tree I was trying to coax into playing nice as it fell. 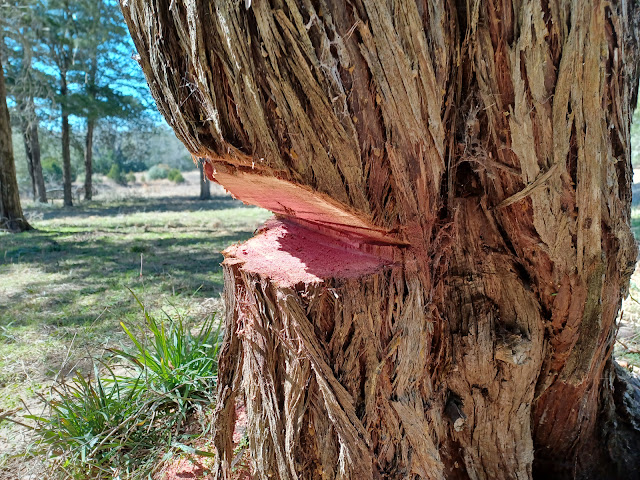 Now all that was left to do was tip-toe under that menacing behemoth and start cutting, very aware that the chain-saw chaps, leather gloves, and face-shielded hardhat were largely symbolic in the face of the many thousands of pounds of merciless wood looming overhead.
This face-cut I made might look a little shallow but it wasn't for guiding the fall of the tree, we all knew where the damn thing was going, I put it there to minimize rolling of the trunk as it fell. 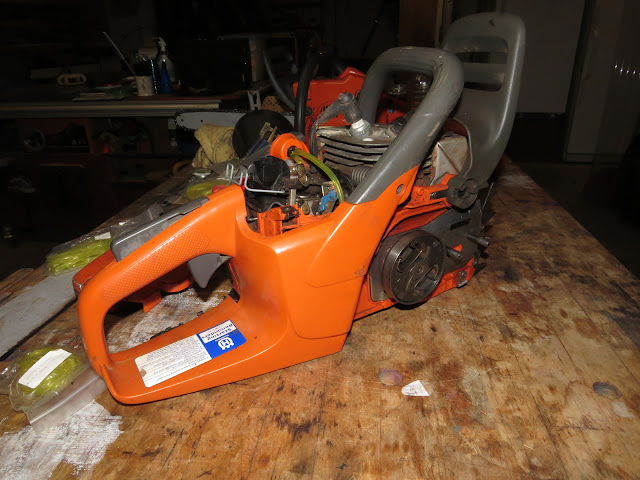 But I've always had an iffy relationship with small engines, and about the time I got the face-cut to where I wanted it, my big chainsaw decided it had enough of me and picked up its toys and went home.
No amount of fresh fuel, adjustments, or pampering, not even the lure of free candy or the threat of the recycling bin, was enough to entice it to come out and play again.
So I was left with my small saw. 14 inches of guide-bar verses 28 inches of killer trunk! 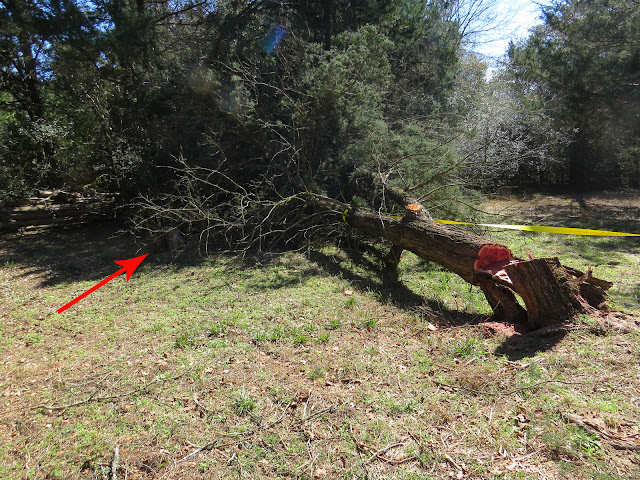 It was a long and scary battle, and it wasn't pretty, but suddenly, in a flurry of sawdust being thrown off by an angry, snarling 2-stroke, the roots on the up-hill side of the tree started to lift and snap under my feet, sending me running halfway to the county line, (I'm proud to say there was no screaming but there might have been a series of "oh shit! oh shit"s - or words to that effect - as I ran) and she finally came down, resting nicely on that face-cut as she went thank you very much!
And if you look close there at the red arrow 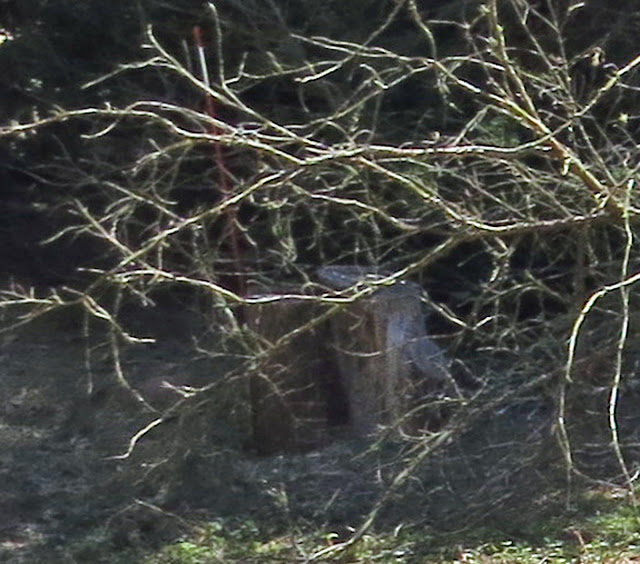 blown up here in this image, you can see that the snatch-strap just barely managed to make her miss doing any damage to The Wife's pet seedling, though it was a near thing. 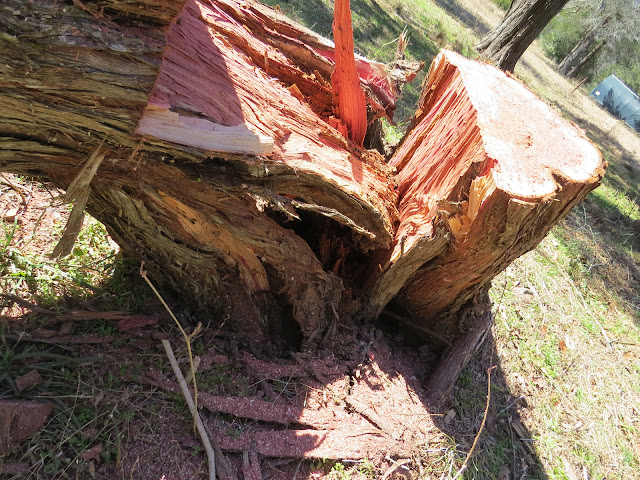 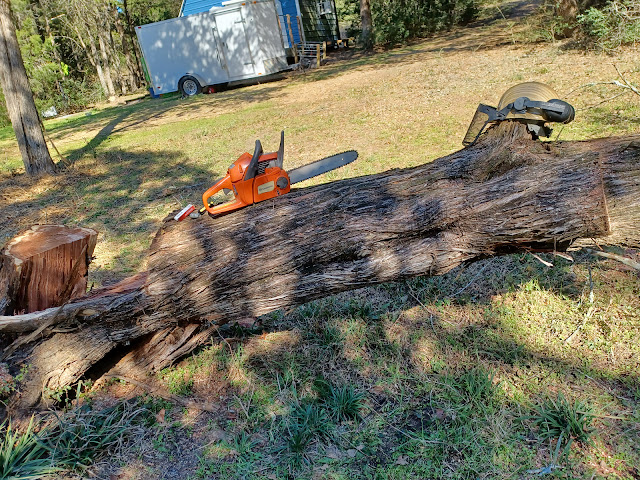 and yeah, I could have used a bigger saw!! 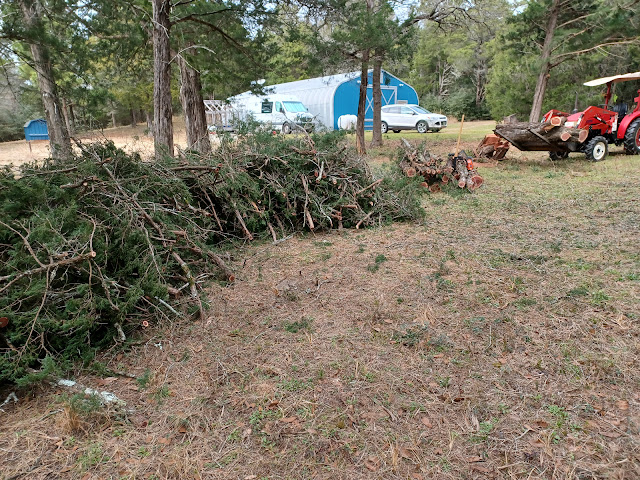 But I made do with what I had and with some careful cutting with the too-small saw from both sides and the help of my peavey I eventually managed to break her down into three tractor-loads of bigger stuff, one on the tractor, one there just below the car and another already carted off out into the woods to create habitats for critters, as well as a big pile of bits small enough to be run through the chipper. 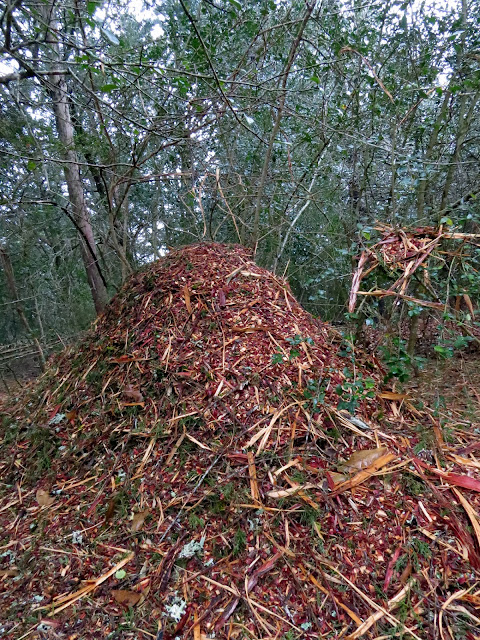 This is what that pile of small stuff looked like after being fed through the chipper hanging off the back of the tractor. There's no scale of reference in this photo but the pile is about four feet high.
Once I had that tree all cleaned up and the ground clear of tripping hazards and safe to work on again I had to do it all over three more times!
Take a tree down, clean it up, and move on to the next. 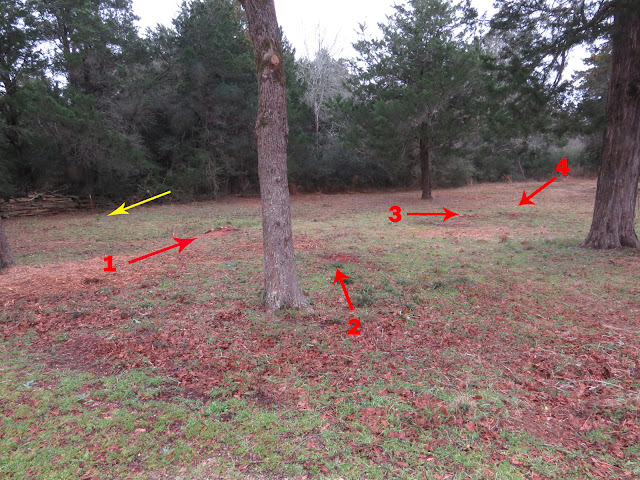 But when that was finally done, and we're talking several days, days in which I could have skipped my usual morning workout without penalty but stupidly didn't, I was finally able to go back and trim the stumps off near ground-level to make mowing this area with the brush-hog much easier than when I had to dodge those four trees. (I always fall trees at about waist level, which keeps my on my feet so I can run away faster, then go back later to trim the stumps down.)
Now all I have to do is remember to dodge the little seedling there under the yellow arrow when I'm tractoring around. 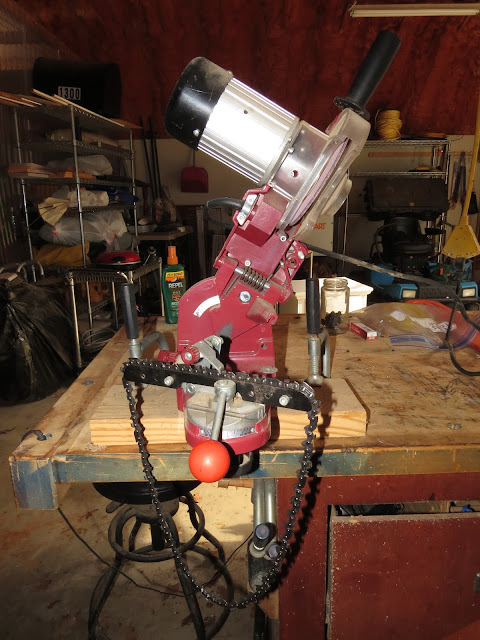 But the job wasn't quite done yet!
Some think cedars are soft wood, but they aren't. Especially down around the base of the larger ones where the wood is remarkably dense, so dense it can be polished like steel. On top of that cedar is actually kind of gritty because it tends to incorporate the sandy loam it prefers to grow in. Both these traits take a toll on saw-blades.
For this reason I have three chains for each of my two saws that I can swap out as a chain gets dull, (starts creating more dust than chips) rather than having to stop in the middle of a project and sharpen. But since I was limited to the small saw for this job its chains took a lot of abuse and I'm that guy that insists a job isn't finished until all the equipment and tools are cleaned, tuned, and put away ready for next time.
Fortunately I don't have to hand-file every tooth on every chain. Instead I have this sharpener. It isn't automatic, I have to hand-position each tooth before hitting it with the grinding wheel, but it sure speeds up the process!
So, three chains, 51 teeth, sharpened and now I'm done. 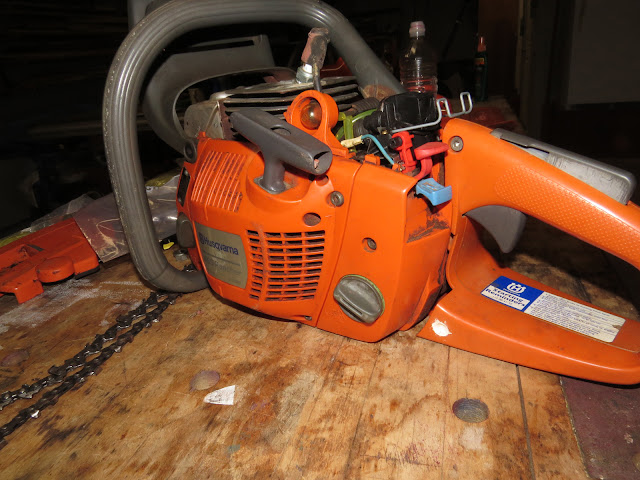 Except that I really should do something about getting that 455, the big saw, running again.
Oh, and there's those three trees on the other side of the main barn that need to be taken down at some point, hopefully without hitting the well-house - - - but frankly, right now procrastination seems like a better idea.