What Strange Hell is This! (and a Tomato Update)

Even more so than most of mine.

But, in the way of those with older bodies, I've been sort of sidelined from real hiking - therfore real posts - for several months now with some sort of an Achilles injury. Nothing serious enough to completely curtail normal movement, pack-less laps around the property, the felling of trees, even collecting a couple of tubs full of rock (for the next big project) but enough to make hiking any distance with the weight of a backpack somewhat problematic. (I was sure that I was finally over it but a couple miles with a 30 pound pack the other day said otherwise.) So I'm making do with what I have - you know, post-wise. 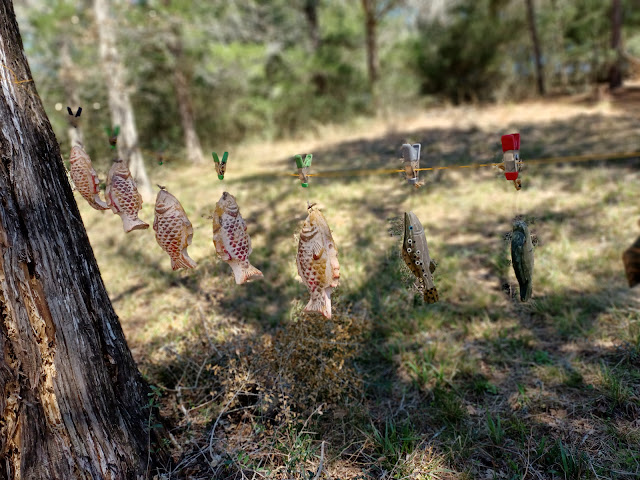 Injury or not, the chores don't stop, and when I say chores that often includes The Wife's latest craft project that I somehow end up working on ('but you're so much better at it than I am!' - Ha! If that's the case why do I hear 'You're doing it wrong!' so often?!) and when I glanced up as I was stringing these poor creatures up by their noses 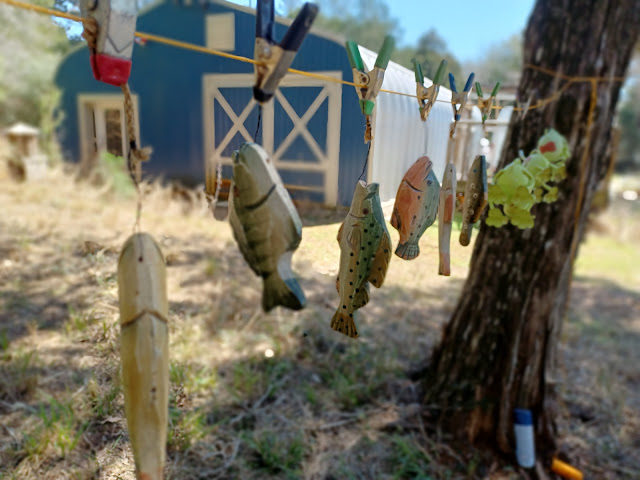 or even more ignominiously in the case of the green cats down on the far end, by their butts, I got a creepy vibe.

As I stood up and looked at the carnage it flashed through my mind that this was the sort of stuff that ends up on Dateline or Snapped. (And I wouldn't be the guy the neighbors say 'I never would have guessed.' about. I'd be the guy they'd say 'I always knew there was something off about him!'.) 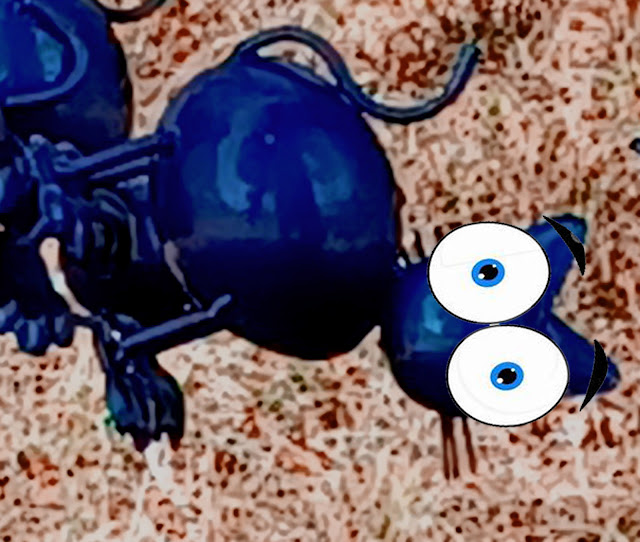 I think the cats were even more outraged after I painted their butts electric blue as they hung there unceremoniously by their tails.

I couldn't tell if that was the evil eye or just indignation.

Fortunately I didn't get the same attitude 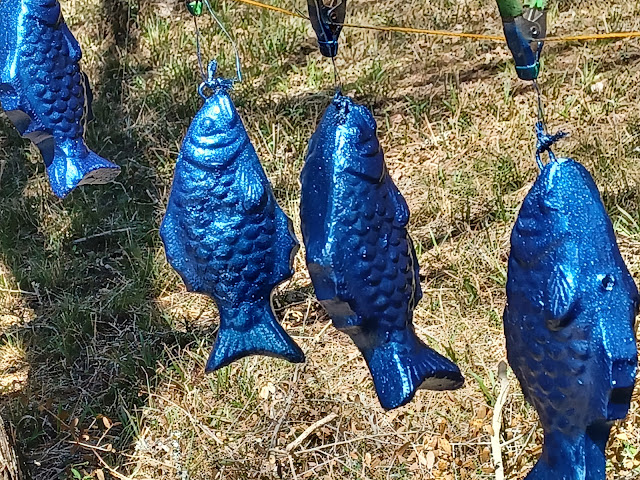 from the ceramic fish. 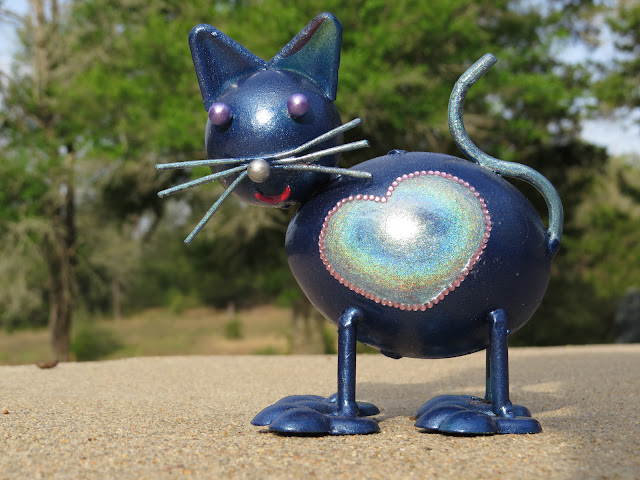 And apparently, once The Wife finished working her makeover magic on them, even the formerly weathered and peeling cats were happy with the results. 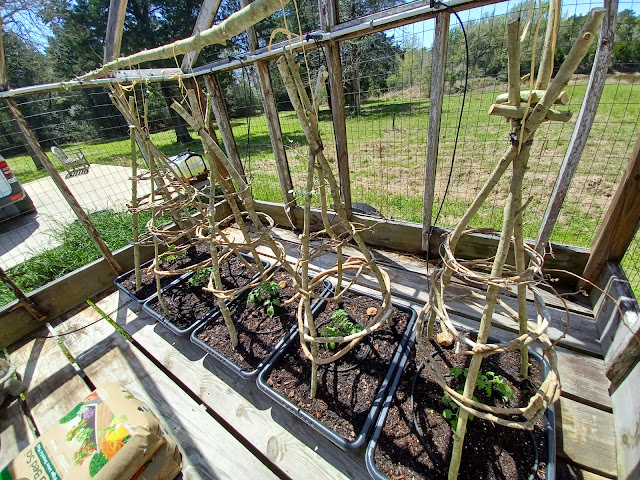 By the way, I was asked by one of my precious few readers for updates on this year's tomatoes and since I can't afford to piss off any of my already sparse audience: 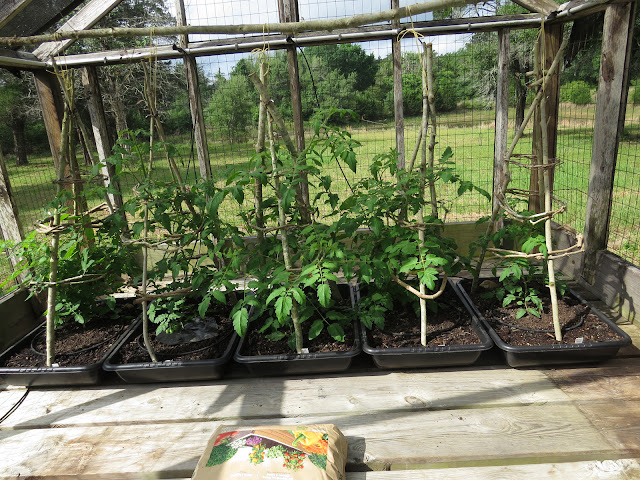 Three of the 5 plants have reached up to the third ring on the cages, one has topped the second ring,  - - and over there on the right, the Ball's Beefsteak has barely made it over the first ring, and without a blossom in sight.

Maybe that's just the way of Beefsteaks and it will take off soon, but we have never had much luck with them in the past either. (But The Wife really loves the idea of a perfect BLT so we keep trying.) 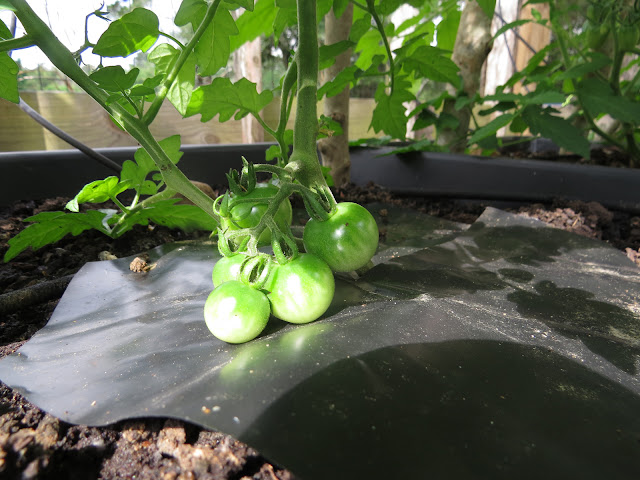 One of them, that saucy little bitch the Sungold Cherry,  fired off her first batch so close to the ground I'm having to keep a bit of plastic down there to keep them out of the dirt. 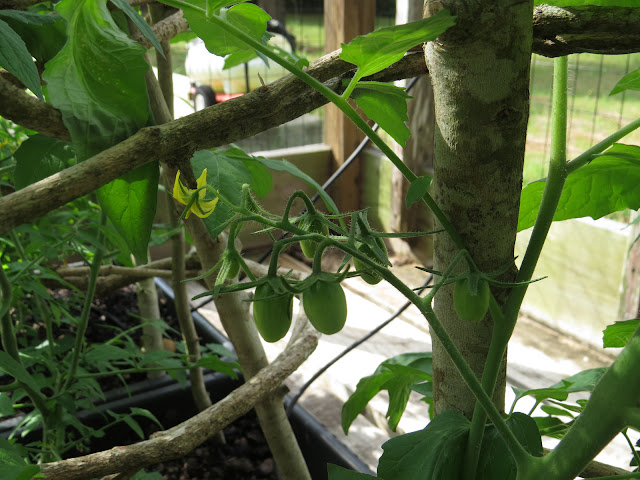 The others are being a little better behaved and are setting fruit more traditionally.