Last night I dreamt - - Dreamed? Dunno but even Shakespeare waffled between the two, though, being a Brit, he did seem to favor dreamt slightly over dreamed.

Anyway - as I was saying before I so rudely interrupted myself - last night I dreamt about writing a blog-post all about giving y'all a tour of our property. Although the place in my dream wasn't actually ours, (Big ass house over on one side that is NOT our style!) it was a very detailed dream, right down to editing sentences so they flowed better (Yep! Now I know it was a dream!)

I know, I know. The last thing anyone really wants is a tour of someone else's domicile (Feigning interest and forcing yet another enthusiastic 'oooh - ahhhh' as your friend proudly points out the size of the closet in the guest bedroom of their brand new home while all you really want to do is go out back and eat hot-dogs off the grill.) but a dream's a dream and it's bad luck to ignore them.

Or did I just make that last bit up?

Well never mind. It's my blog and I'll do what I want! (No matter how trivial or embarrassing a post may become later when read from the vantage point of passed time.)

It took us nearly four years, years that spanned the millennial madness, (Hoard crap and run for cover!! All our computers are going to stop working at midnight Jan 31 1999!!!!) of trolling on-line listings during the week, assembling an itinerary, and driving all over hell and back again through central Texas nearly every weekend to find our little slice of ground.
T
In the middle of that we actually bought a small house about 30 miles away from here (Two hours from the city) and lived in it for a few years to hold us over and get us out of the city while we continued to look for, then build this place.

Finally we found just under 14 mostly wooded acres that ticked all our boxes, or at least most of them, and we were blessed with being able to get our hands on it.

The long axis runs east-west with a narrow county road on the short east edge (Just barely showing on the right side of this image) and a power-line easement kinks through a couple hundred feet in from the eastern boundary.

At the time we bought it it already had a 200 amp power drop on the line pole right there at the point of the kink in the easement with a temporary electric line run from there three hundred feet across the surface of the ground to a freshly dug well. (At least they used grey direct-bury rated wire and not the yellow stuff used inside protected walls! But the electric coop still wasn't very happy about it and we had to change that out to a proper buried line quickly!) Oh, and there was also a freshly dug pond with a little bit of cleared land around it.

These "improvements" were done by a young couple from the city with two little kids that thought they were going to build a weekend home here until, after poking at it for two years, their bill collectors forced them to admit that their eyes were bigger than their budget!

In that previous paragraph I put "improvements" in quotes because, although the well and power drop were nice perks, on our own I think we would have just left the original waterway alone rather than putting in the pond. And we certainly wouldn't have cheaped on the cost and used an inexperienced contractor rather than the pond-builder recommended by the locals! As a result our pond leaks more than it should and, unlike the properly done pond directly to our south, it is rarely full.

Pretty much nothing is flat on this property and when we built the 50'x30' barn you can see there on the eastern side of the property we had to dig into the hillside to create a level pad to put it on. (Our "house" is in a single room in the corner of that barn.)

Basically there are three north-south ridges (Red) across the property. One down each of the eastern and western boundaries and another near the middle. (We happen to be sitting on the high point in the county so no significant flooding worries here!)

In between are two different drainage's, (Blue) One through the pond and over the spillway, and another, mostly dry except during heavy rain, and even then usually cross-able.

Between being away all week at work and spending weekends trying to build the barn to the point we could move in, it took me a lot of years to finish cutting the trail system into this otherwise trackless property.

But even before the trails were done I was using them every chance I got. Nowadays, in addition to leisurely strolls just to be out in the open air, I do fast-paced workout laps on them with a weighted backpack 3 or 4 mornings a week.

There's just about a mile and a quarter of trail out there and when doing my workout laps I have a route that covers each one twice, once in each direction. And it's along these trails that I intend to take you on a tour because - well, a barn's a barn and basically boring. Certainly more boring than a hike through the woods! (Which, I admit, is probably boring enough to many - - -) 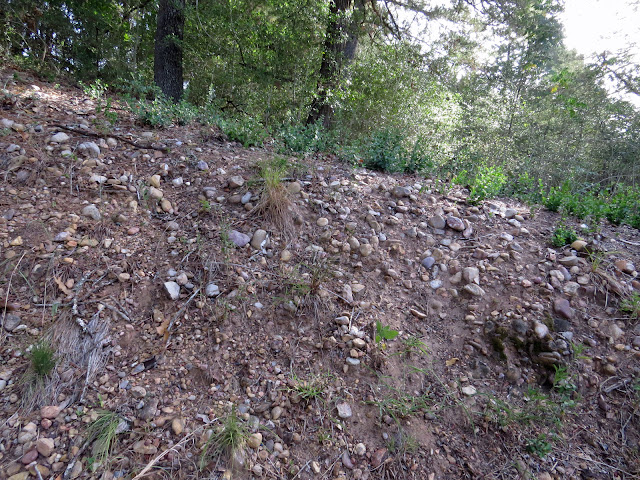 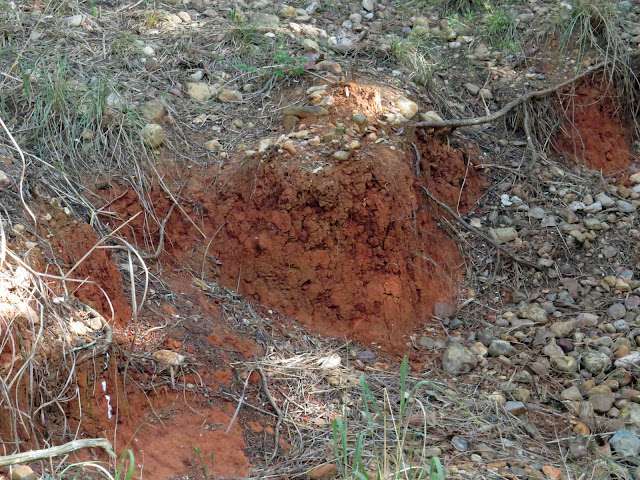 and shot through with a few veins of red clay. 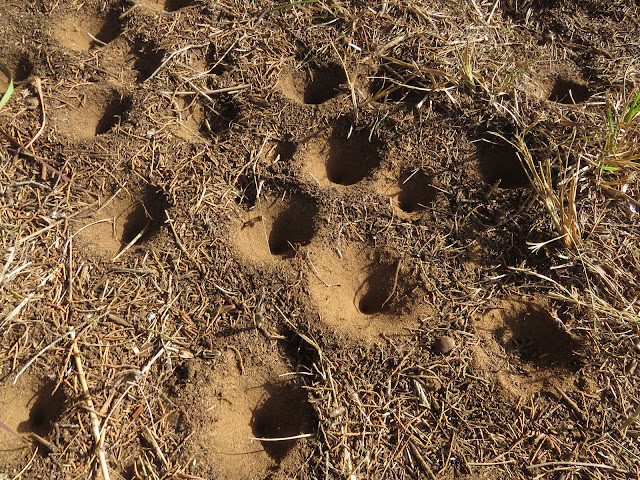 The lower areas have collected a thicker layer of sandy loam on top which the doodle-bugs love building their ant-traps into.

This is the view from next to the barn where I do my morning workout prior to hitting the trails for my laps.

By a quirk of topography the rising sun slips through a notch and, before anything else, lights up those dead oaks 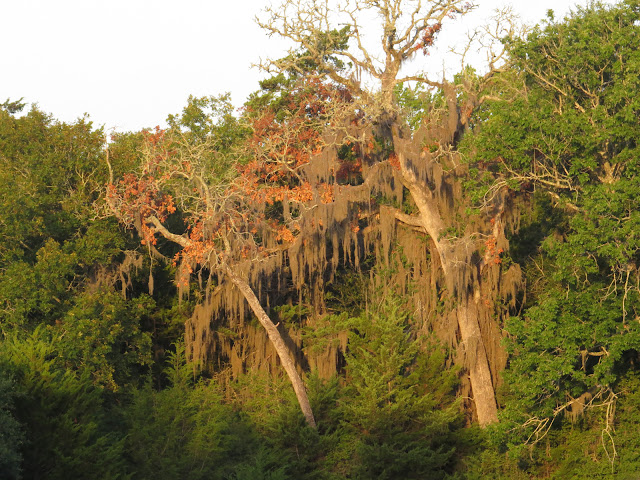 liberally draped with Spanish Moss over there on the other side of the pond.

I've made several attempts to paint this, but I'm just not good enough.

And yes, there is a pond out there but it's very hard to see at the moment from this vantage point because of the current drought brought on by the La Nina weather pattern. We had less rainfall year-to-date during the drought of 2011 (9.21") than this year (13.6" while the average year-to-date is 20.7") but it's still been damned dry around here! So the pond is currently pretty low and hiding down below its banks.

In the foreground of the previous photo you can see a couple segments of my trail system. Here in the open I  mow them once a month in order to cut down on the number of burrs I pick up when walking them.

The one heading off to the right is going down to the tractor-barn where we keep - wait for it! - the tractor! As well as a healthy supply of fuel for the generator - you know - just in case.

The trail to the left is heading for the spill-way then the dam which is how I get across to the back side of the property.

When I started this post I envisioned wandering the trails with camera in hand and posting them in sequence with a short description for each, but like a bad habit this has unintentionally grown into a monster and now instead of trying to cram it all into a single, excruciatingly long post, I guess I'd better break it up a little, so I'll come back later.

Besides, right now I'd rather be out back eating hot-dogs off the grill!