Ya Visto - I Already Saw It - is a quick and dirty two-word Spanish translation of Deja Vu. A more accurate translation would be something like Sentía como ya esto hubiera vivido - I felt like I had already lived this - but that seemed a little cumbersome for the title of a blog-post.
Of course I could have just stuck with the tried and true Deja Vu (Yep, they use it in Spanish speaking countries as well!) and been done with it, but even though I only worked with them at a management level for 5 years and that ended 10 years ago when I retired, all things French still makes me cringe! 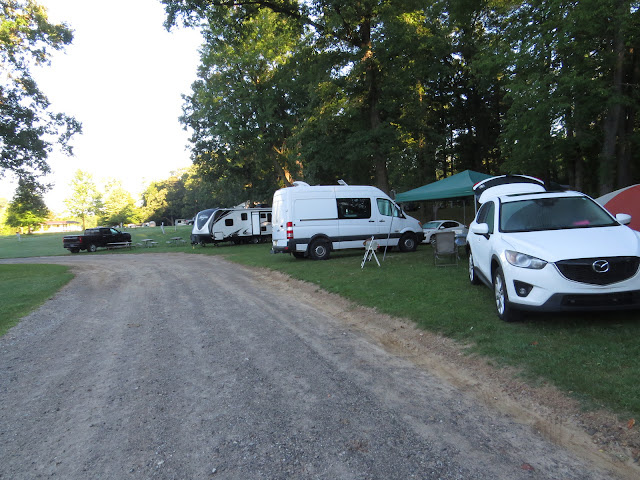 Anyway - if it's August, and I'm camped in the middle of a whole bunch of other people, then it must be family reunion time again! 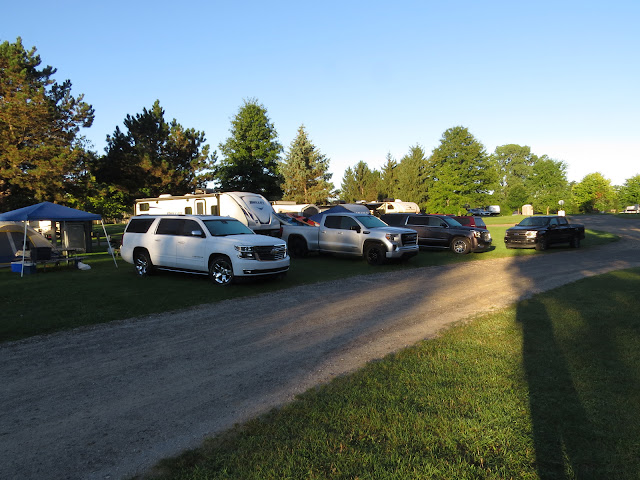 These two photos were taken Friday morning (Michigan is a no-front-license-plate state so I didn't have to blur anything!) and all but one other rig with its accompanying tent (it was a somewhat large multi-generational twig of the family!) was already here at the campground, the majority of us having arrived on Thursday, well before the weekend.

That's because we did something a little different this time.

Rather than each of us reserving an individual campsite, hopefully in reasonable proximity to one another, one member of the family reserved a group site for all of us and divvied up the cost between the camping attendees. (we also have some day-trippers that show up for the Saturday group lunch who were only required to bring food!)

Unlike individual campsites, the group sites are only reserveable by the week. Your reservation starts at 1500 Wednesday and ends at 1100 the following Wednesday.

We had a couple rigs in place on that first Wednesday, and obviously filled the place up by Friday evening, 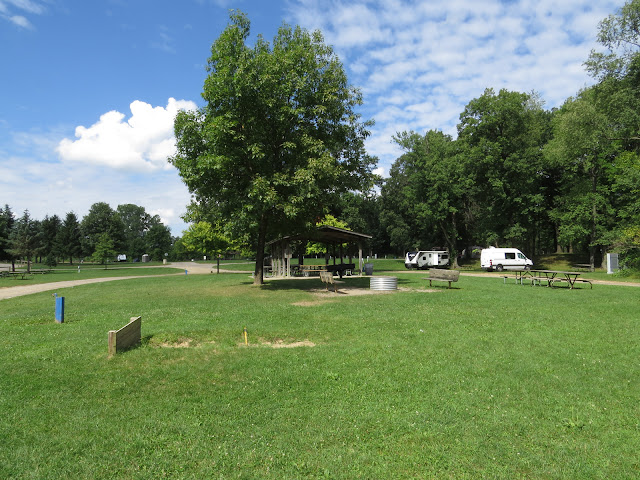 but this is how things looked after lunch on the following Monday.

I would also be leaving in a few minutes and that last trailer the following morning, leaving one completely unused night on our reservation, but even so, considering that each share of the cost for the week was about $80, it turned out to be not only a nice setup for a reunion but also a bargain for an electric campsite. (Where I was parked was pretty shady but plugging in to fire up my small shore-power charger would have required turning around and backing down a bit of a slope so I didn't bother. I'm loving my Battle Born Lithium Ion Batteries!)

There are 15 RV electric posts for each group site. a shared shelter (there are two group sites per loop.) with loads of electric outlets in each half for catering style equipment,  a fire ring for each group, and a couple water-points for filling jugs. 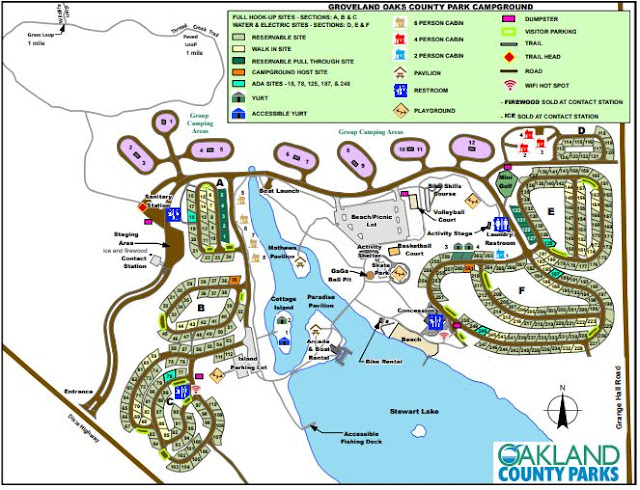 This is not a small campground by any stretch of the imagination! 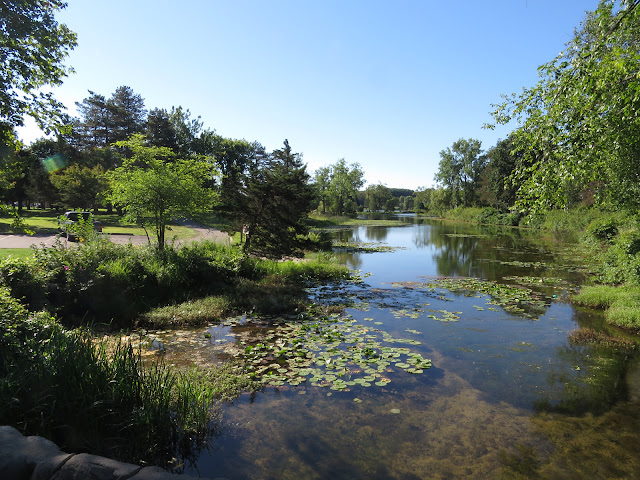 For entertainment there is the lake with a couple fishing piers and a canoe/kayak launch, a kayak and paddle-boat rental, 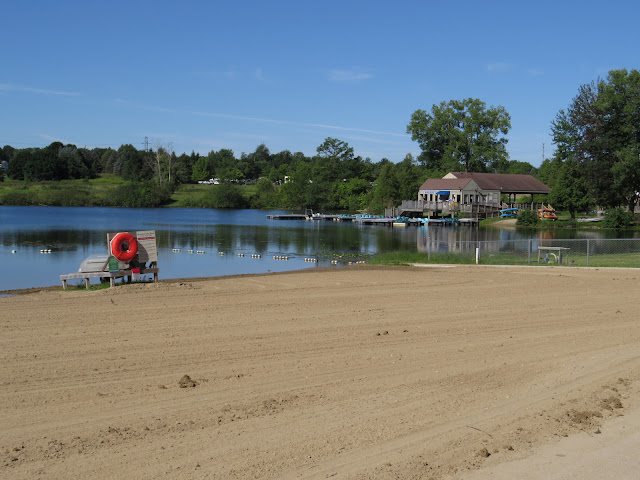 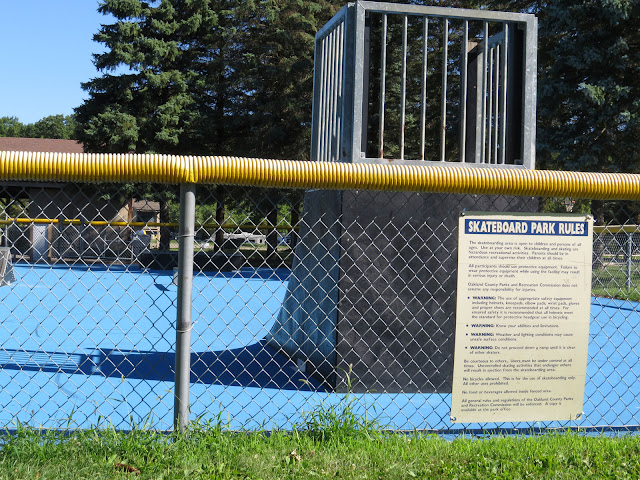 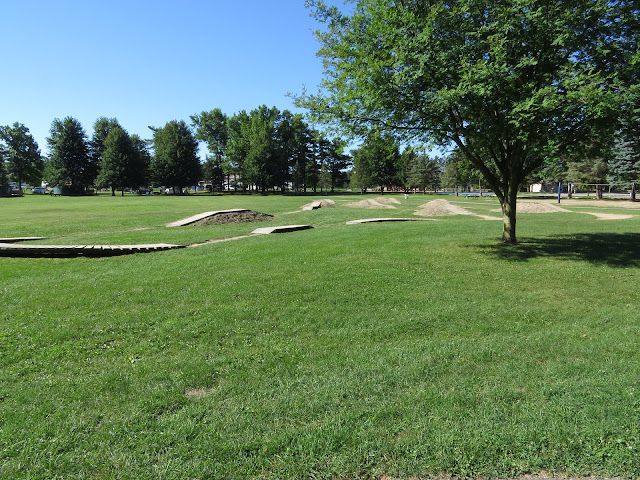 a bike-skills track, and an open-air entertainment venue where they had a DJ'ed dance on Saturday.

Phew! Are we worn out yet?

Oh yeah! And almost as an after-thought, a couple miles of trail. (guess where I was while others were scraping themselves up on the bike-skills course!) This photo is actually from several reunions ago. (Oh come on! You didn't think I, a security freak, would really plaster faces and names on here!)

Mom, who is in this photo and was there at this year's reunion, remembers going to the family reunion when she was a very young girl. (Damn girl, that was a looong time ago!) It used to be down in Ohio because that's where the larger portion of the family were and I can remember going to many of those. But over time our branch of the family grew, the reunion evolved, and the Michigan branch, the three siblings of immigrant Irish parents living near Detroit, essentially split off and turned it from a massive day-trip event along the lines of a small-town festival to a more manageable weekend campout.

When my generation's parents aged beyond the point of organizing things and passed the baton down to us Mom expressed some concern that the reunion would just die out. And for a while her concerns seemed justified. There were times when different branches of the Michigan crowd were under-represented and the head-count at the reunions started getting disappointing, (The head-count in the photo above was in in the mid 20's) but then the baton was passed down to the generation below us, or perhaps it would be more accurate to say that the baton was seized by the generation below us, and this year the head-count at the Saturday lunch was 38.

We haven't had that many people show up all in one place all at the same time in a long time. And next year's plans are already made. 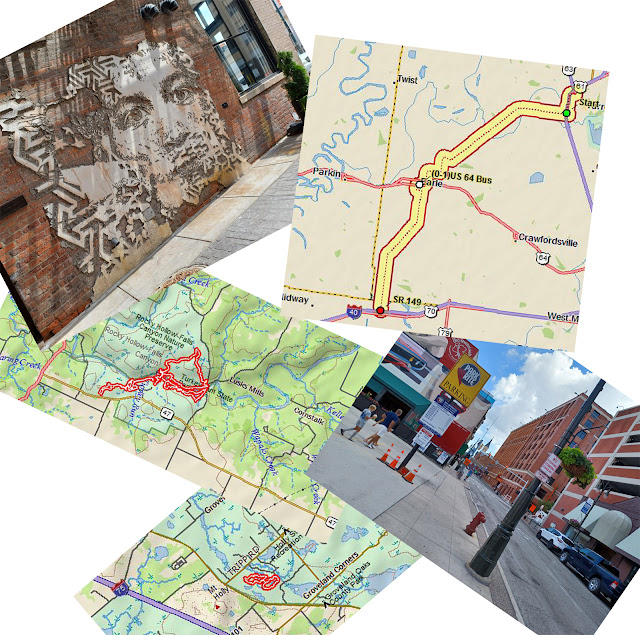 But I'm getting ahead of myself.

Back here at this year's reunion, it's about a 2600 mile round trip for me to attend said reunions. This time it took me nearly three weeks from door to - well, back to the same door - and along the way way I made three stops (Not counting overnight sleep-stops) at two new places and two old places, (yeah, I know - even for me the math doesn't add up, but hopefully some of the following posts will sort that out!) hiked 6 new and one old trail, ate two dinners and one brunch with Mom at her community, ran into a class-mate - also 1200 miles from her current home - from over 50 years ago (good thing our respective Mom's knew who we were because we wouldn't have figured it out on our own!) visited a few places normally outside my comfort zone, and tried driving three different new-route segments. two of which I'll use again and one which I won't.

But that will all have to wait for upcoming posts. For now (as he sucks up the cringe)