8-4-92
The weather has closed in and it’s been raining hard. Hard for Anchorage anyway, which means a whole half inch fell during the night.  I hiked the Old Johnson Trail from Potter to McHugh Creek and back today. (Update 2014: I see from my map they have renamed this trail the Turnagain Arm trail, wiping out all trace of the accomplishments of one more of this country’s true pioneers.)  This is normally the first hike I take when I get up here. It’s relatively tame yet with enough ups and downs to check out my conditioning, but there just wasn’t enough time left yesterday to do it. Today I made a point of finishing up my paid work early. 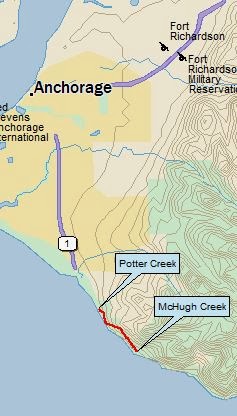 The Old Johnson Trail runs the full length of the north side off Turnagain arm, but so does SR1, so there are several trailheads spaced out along the trail making it just right for someone on their own who has to hike each segment out and back.
The Potter Creek trailhead is right where the Anchorage Coastal Wildlife Refuge, the Chugach mountains and Turnagain Arm all come together. In fact you can look back and see the taller buildings of Anchorage from here, but the closeness of 'civilization' didn't keep me from being a little spooked.  Yesterday two black bears were shot and killed in separate incidents in neighborhoods just to the north of here and the people around here tell me that they have never seen so many bears.
So, of course, when I get to go out and take my first real hike of the trip, the first thing I find a piece of paper stapled to the sign at the trailhead saying that a grizzly sow and her cub had been spotted on the trail two weeks ago!
Because of the rain overnight, any tracks I found on the trail had to have been made this morning and sure enough, mixed in with the moose and sheep track, I found bear!  The tracks were  headed in the opposite direction as me, which meant by the time I found them I had already passed the bear.  (Of course I had to go back that way to get to my car!) 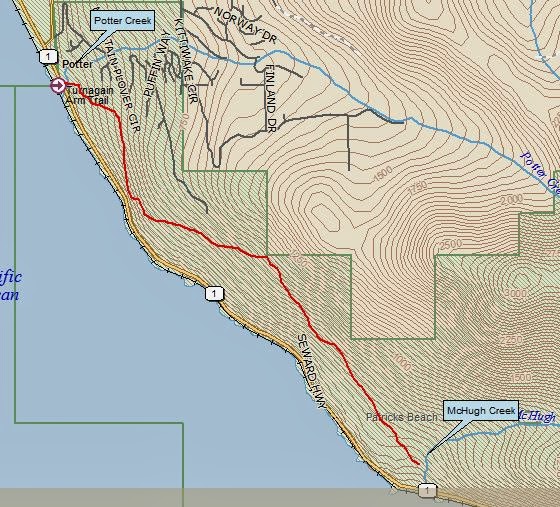 If it was a grizzly it wasn't the sow that had been spotted earlier.  The tracks showed only the one bear and it was small, (small means that the tracks were slightly smaller than my hand!) either a full grown black bear (150-200 lbs) or a two or three year old grizzly, and I'm not near good enough to tell the difference from tracks. (How do you tell the difference between black bear tracks and grizzly tracks?  Just follow them.  If you find something black and pissed they were black bear tracks, if it's brown and pissed they were grizzly!) Even though black bears are smaller than grizzlies it's better to go by color and not size because, and I know this from experience, anytime you're out on a trail and run across something that's furry, has four legs and is pissed, that sucker is going to look BIG!
The vegetation is in full summer growth so it's hard to see very far and the trail gets pretty closed in at times. The flies were thick in some spots, especially where the vegetation closes in on the trail, but the mosquitoes haven't been a problem.
Anyway, I made it out and back without collapsing with exhaustion, getting lost or getting eaten. All in all, a good hike!