Did the rail-geek/tourist thing today.  Got on a train in Anchorage at 6:30 this morning, (a pair of Bud rail-diesel-cars) and rode it down to Seward.


I can see why the road doesn't use the same pass as the railroad through the Kenai Peninsula.  Once rounding the upper end of Turnagain Arm the road and railroad part ways with the railroad, which was there first, going up Placer River and through Placer River Gorge following the course of the Iditarod Trail.  Unlike the trail which can get away with lots of steep ups and down, the railroad had to follow a more consistent grade and in the gorge the rail bed is cut out of rock far above the river and goes through 5 separate tunnels before coming out in the upper valley where, in the days of steam, there used to be a series of loop trestles winding back up over top of themselves to get the trains up that last climb to the pass before starting down along Trail Creek on the other side.  A road could handle the grades, but there’s just no room for it through the gorge so when the road came along it moved over to the next valley where it makes the much steeper climb to Turnagain Pass. 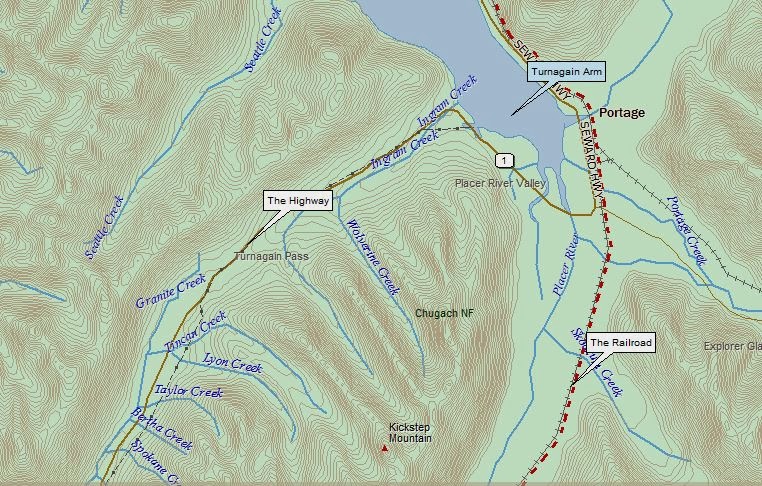 Once in Seward, I went on a dinner cruise of Resurrection Bay which included the north end of Kenai Fiords National Park.  We got up close to several bird rookeries, including a puffin rookery. Puffins are really strange looking birds that fly surprisingly fast for their squat-fat shape.  We also saw sea otters, eagles, a few mountain goats, and, back in the harbor, a sea lion that had decided one of the finger piers was his.


The weather turned out to be great, but once clear of the protection of Resurrection Bay, the boat turned back because of the swells left over from previous weather.  I thought the water was pretty flat myself, the swells were only 2 or 3 feet, (ok, maybe 4) but then again I’m used to slamming though waves at 20 knots on a chase vessel and doing ship-to-ship transfers out in open ocean when servicing data centers on some of the company vessels. 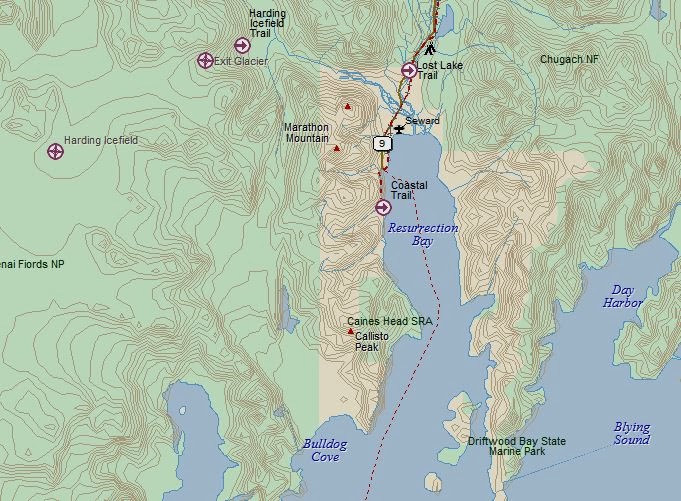 Back on dry land in Seward, I re-boarded the train for the trip back to Anchorage.  We got into the station at 10:30 that night after spotting some black bears along the way.
Posted by greg at 2:06 PM