Yesterday, after cresting my third pass of the day, I coasted on down into Raton NM. Raton is a small little town with some charm but parts of it can get quite crowded. I think that's because it's the first or last, depending on which direction you're going, stop along I25 in New Mexico. This means that the Clayton Rd./US64 exit sees a lot of use because there's a truck stop and several fuel stations nearby. I've learned to skip those, and the jockeying crowd trying to maneuver a combined 60'+ of tow vehicle & RV around too-small spaces.

Instead I turn west at the top of the ramp, go a half mile to the light (The visitor center is right there at that corner too if you wish to partake.) and turn left. Just up ahead on the right is the Loaf 'N Jug. They usually have as good as or better fuel prices than the stations back there by the exit and never seem near as crowded. As a bonus the pumps are parallel to the road which makes getting large rigs in and out easier, eliminating that tight turn between knocking the pumps down and driving through the front windows that pumps perpendicular to the store force on you.

To make it even better there's a traffic light right there to make getting back on the road in either direction safe and easy, and just across the street is a decent grocery store. And if you're looking for one, a block or two further south is the KOA.

I was looking for one.

I've stayed here in the past and have a favorite site tucked in between one of the cabins and the residence that's just made for small rigs like mine. Unfortunately that site was already occupied. In fact, pretty much every site in the campground was either occupied or spoken for.

Being half way between Albuquerque and Denver  this campground is a popular reunion spot. I think the guy told me that some 30+ rigs in there at the moment were all from one group and he had three different groups in at the time. Add to that it's a Saturday evening during travel season and this place is hopping!

Fortunately I'm in a small rig that can fit into tight spots and they had exactly one of those left. It was one of those orphaned little patches of ground left over at the end of a row and carved up really small by the curve of the access road looping around it so nothing much over 22' feet or so will fit.

OK, I have a confession to make. As I 'took it' I also jumped ship.

You see, I've been a loyal Good Sam'er for decades now; but I think maybe that loyalty has run it's course.

And there have been some changes at Good Sam in the past couple years. Perhaps most noticeable is that the Highways magazine is no more, instead I get a sales flier from Camping World every month or so. True, my Good Sam Deluxe membership has been merged with Camping World's 'club' discount program but really, how much do I buy there anyway??

So when I registered last night I finally, after all these years and hoping no Good Sam'er was looking over my shoulder, broke down and also paid for a KOA Value Kard.

My Good Sam membership is good through 2017. Between now and then I'll spreadsheet both memberships and see just where the value really lies.

Anyway, back at the campsite; even at this altitude the heatwave was still pressing down with uncomfortable strength but I just couldn't bring myself to stay inside so pulled out the Easy-Up and set up on the just barely large enough leftover patch between my door and the road to read for a while. But that got rudely interrupted when a micro-burst picked up half the dirt parking lot across the ally from me and threw it through the chain-link fence and into my face, hard!

Fortunately, based on the clouds playing around in the distance over the mountains, I had staked the Easy-Up down so it stayed pretty much where it was during this sneak attack. Two tents a few sites away didn't fare quite as well. (I had to go to the web to figure out which fair/fare was proper in that sentence. Maybe I should have paid more attention during English class. . .) But half blinded and with the clouds looming closer, I had had enough so folded up my toys, went inside and suffered the roar of the air conditioner.

That was last night. Early this morning, just so it wouldn't be one of those all-travel days, I broke camp and drove the few miles up to Sugarite Canyon State Park, dropped my $5 entry fee into the self-pay post because the visitor center wasn't yet manned, and hiked around the site of the abandoned town that used to service the mines up there.

I guess I hadn't had enough high altitude acclimation time because the 7500' altitude kicked my butt pretty well, and instead of gorgeous rising-sun lighting, high, hazy cloud cover kept the light grey and flat making for boring photos so I won't impose them on you, especially since I've been here before and posted about it in the past. 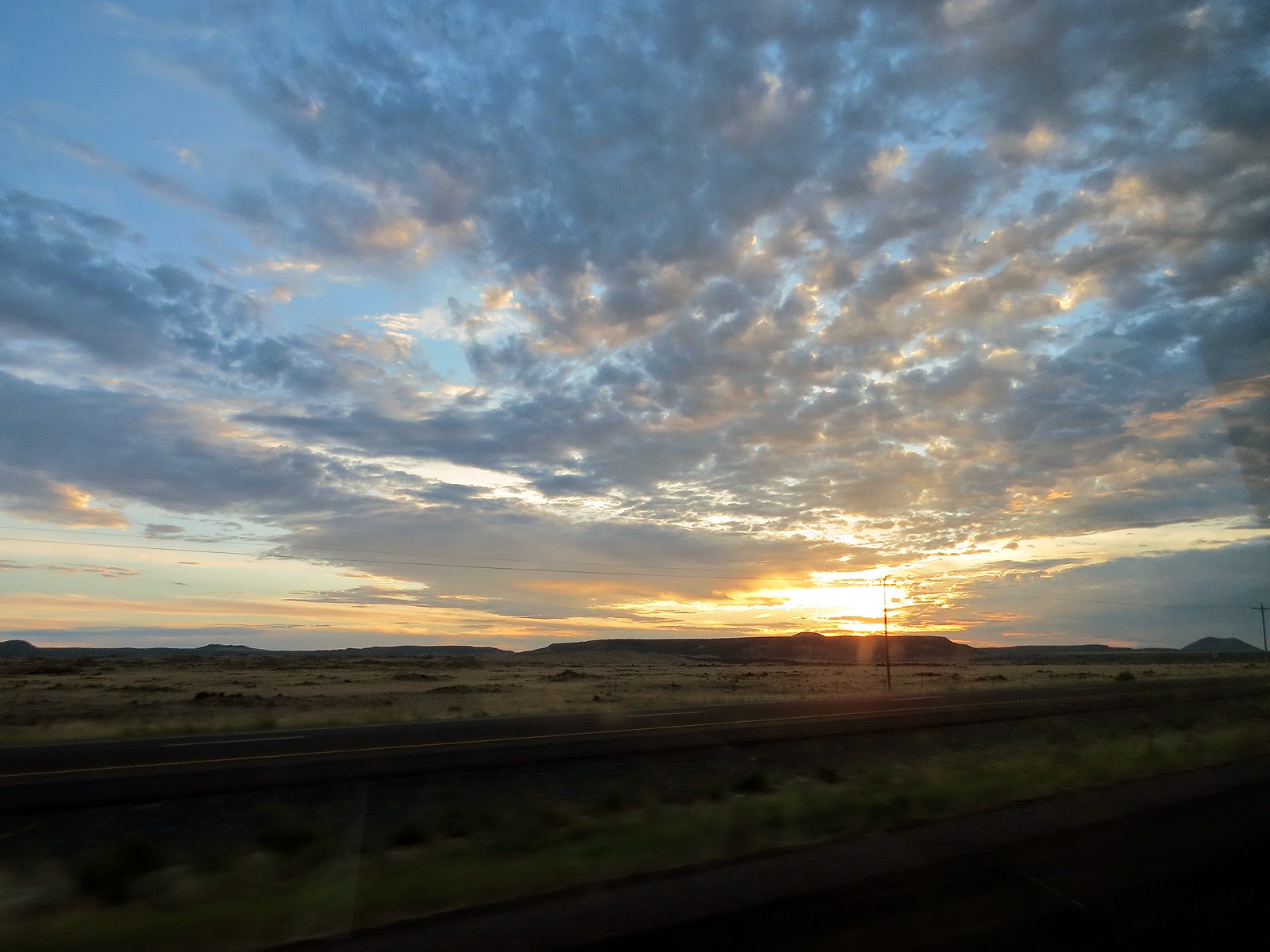 OK, well the sun is now setting on this trip.

I know, I know. Hokey, in fact groan-worthy hokey, but someone has to do it otherwise it wouldn't be hokey anymore. So you see? I'm just doing my part to keep order in the universe!!

I'm halfway across Texas tonight and will make it home tomorrow, (Texas is a two-day state!) just in time to buy a new car the day after tomorrow. Our strong and lively 2007 170K mile Ford Focus Wagon will be passed on to a relative that needs it more than we do and we will be driving around in a new Ford Escape. That will be the 4th Ford Escape currently within the family clan, but I have to say, that's not our first choice. If Ford was still building the Focus Wagon that's what we would be buying instead.

But once again I digress.

Truth is, this trip, in an attempt to avoid areas that are starting to get stale for me, was too many miles in too little time.  And, though I can spend all summer working out in my un-air conditioned shop all day long or standing at my computer station, which is also out in the shop, for hours at a time, when on the road I find that somehow the heat just sucks the life out of the trip and overshadows everything else.

Combine that with the school-break crowds and clearly summer is not my time for traveling. But that doesn't mean I won't be doing it again. . . Before I even got home from this trip the next family event had already been planned and scheduled.