What if: Weights and Center of Gravity


OK, finally buckled down and did the calculations for the weight and center of gravity of the camper.

I started by modifying a spreadsheet I used when working on a design for a transportable home. (A trailer-based home without the travel-trailer feel, designed to be mobile but not really conducive  to being moved every few days)

In this case it was important to know what the weight would be in order to make sure the trailer-frame, and axles, were up to the job, and to ensure that somewhere between 9% to 15% of the overall weight would end up on the trailer tongue so the thing would tow properly.

This involves calculating the weight of each separate component as well as it's distance from the trailer tongue (The datum point) then applying a formula that looks like this; =IF(E5>$I$4,(1+((E5-$I$4)/$I$4))*D5,D5*(E5/$I$4))  to find the weight that component puts on the axle. The next step is to use those results in a second formula that subtracts the calculated axle weight from the actual weight to find out how much weight that same component adds to or subtracts from the tongue. (Anything behind the axle subtracts from the tongue weight, anything ahead of the axle adds to the tongue weight.) By then summing everything up and adjusting I4 (The location of the axles) the proper weight distribution is achieved. 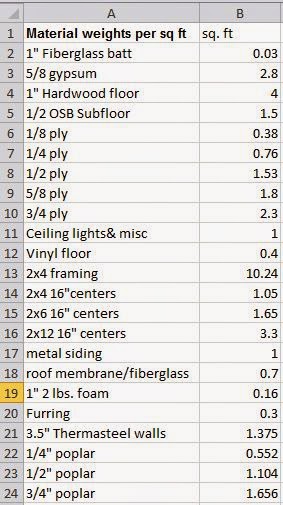 One worksheet of the spreadsheet is used to record the weights of every type of material that would be used for the build, 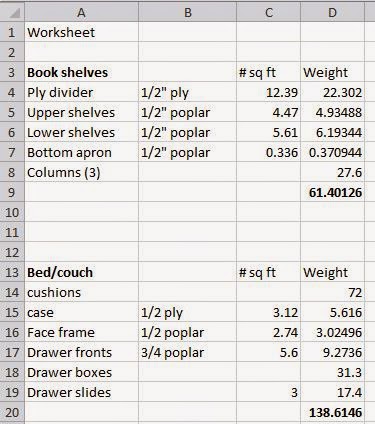 a second worksheet is used to calculate the weight of assembled components like beds, cabinets, walls, roof, etc.


and the third worksheet is where the final calculations are done. (In this case the tongue weight was about 9.47% of the gross. Since the axle datum was based on an off-the-shelf trailer without having to modify the axle location, I called it good enough!) 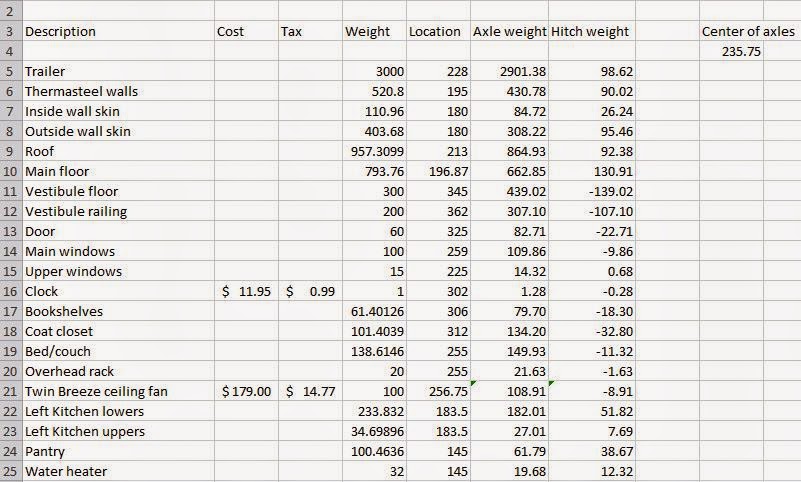 Admittedly, getting the spreadsheet set up and populated with data is pretty tedious, but once done it's pretty simple to play around with things. For instance if I want to see what happens if I use 1/2" ply instead of 3/4" ply for cabinet carcasses I make the change in one spot on the materials sheet and all the rest of the calculations are automatic.

By including a costs column on the materials sheet that then feeds through to the component calculation sheet I can also come up with an estimated cost of materials. (This project, as well as the camper project, are still on the drawing board so I haven't bothered with costing them yet.) 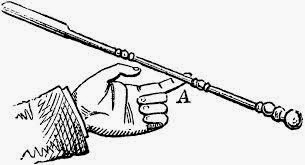 Finding the center of gravity of a collection of elements, such as my camper, is actually easier, in terms of formula complexity, than the trailer weights exercise.

I still need to calculate the weight and distance of each element from a datum point (Which is why modifying the previous spreadsheet makes sense.) but then all I needed was the 'moment' of each element; which is simply weight X distance.

After that it's a simple matter of summing the weights column and dividing that into the summed moments to find the Center of Gravity's distance from the datum.

You can pick any point to be the datum as long as all the elements lie to one side of it (i.e. the datum can not be somewhere in the middle of the camper.) and to make it simple I picked the outside face of the rear wall. 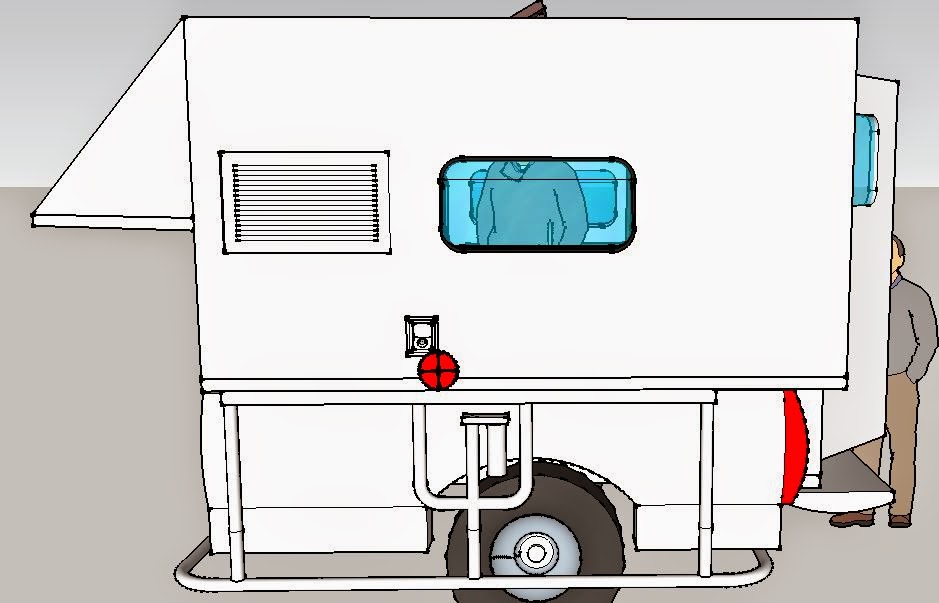 The good news is that the COG is almost 66.5 inches from the datum which puts it comfortably forward of the axle, (The red target in the image above.) right where it belongs.

If I move all the water from the potable tank to the grey-water tank, which sits closer to the rear of the camper, the COG is only shifted by about 2.25 inches, still keeping it forward of the axle.

Assuming a relatively even distribution of supplies through the camper, I can easily maintain this safe COG and will have no trouble keeping the front tires on the ground where they belong and, at the same time, avoid overloading the rear axle. (Any weight taken off the front axle is added to the rear axle.)

I admit, just looking at a side view of the drawing, that doesn't seem like the right spot for the COG. There's certainly more camper behind the COG than forward of it, but the fact that some key heavy items, such as the water tank, batteries and air conditioner are all placed forward in the camper makes it work. Think of it as a teeter toter with an adult on one end and a child on the other. The balance point, or COG, moves towards the adult and away from the child.

Now for the bad news.  The camper with full water tank but no supplies weighs in at about 1450 lbs., leaving me only 450 lbs for myself and my supplies before busting the 1900 lbs payload rating of a stock F150. (Even at the penalty of weight, I prefer to build robustly so there's no thin, cheap paneling held together with staples here.) For some RV sales people that's good enough and they would claim all day long that an F150 can handle it, but I wouldn't be comfortable pushing it like that because I know from experience that weights creep up and people tend to drastically underestimate how heavy their crap really is.

By adding some upgrades to an F150 I can boost it's payload rating and maybe manage to squeak in there, but I suspect the more reasonable solution is to just bite the bullet and step up to an F250 instead.

I'm a firm believer in treating my stuff gently. For instance the van is rated to haul a 5000 lb trailer, but the thought of listening to the van's engine straining near the top of it's power range for hour after hour as it drags 5000 lbs down the road is like fingernails on chalkboard to me, so when purchasing a cargo trailer I bought one rated for 3000 lbs instead.

OK, there's one more post to go in this series. In it I'll go over a few of the variations I came up with as I worked on this project.