I'm not a fan of languages that throw in all sorts of unnecessary letters and one-off rule exceptions, English included, (Give me Spanish any day!) but the inescapable fact is, here in Northern Michigan some of the first Europeans to wander in were French and this has left a lot of places with difficult to spell and harder to pronounce  names, at least  pronounce in a way a Frenchman would consider proper. But frankly who cares what a Frenchman considers proper. (Sorry, it's been three years since I've had direct contact with a Frenchman, but after 5 years worth of working with them in the corporate world before that I still have a bad taste in my mouth. . .)

Anyway, those few adventurous Frenchmen of the past have left a legacy around here, which is how we ended up with the Pere Marquette river flowing right past our weekend home at Barothy Lodge.

Now there are several things you can do with a river. You an look at it, which we did in abundance. You can fish it, which a few of us did with little success. You can freight last season's hides to market on it, which we didn't since - well - I think it's pretty obvious why we didn't. You can watch it rise and take over the downstairs kitchen, which I was pretty sensitive to since the rivers around home in Texas had been doing just that after a very wet May, but that didn't happen here. You can build a bridge over it, but we only had three days and little ambition for such an endeavor. Or you can float it. And that we did.

One of the more organized among us had pre-arrainged a Sunday afternoon float trip for whoever was interested, which, it turns out, was most of us.

We were picked up at the Lodge, (Is it weird that I feel so at home in a rattley old short-bus?) dropped off where a number of kayaks has been pre-positioned, and floated back to a takeout point at the lodge.


The drop-off point is marked on the map as such, but was nothing more than a single-wide dirt path you accessed by climbing over a guard rail near a bridge. There was no place for the bus to park other than right there in the middle of the road so we all quickly scrambled over the guard rail. If somebody hit the bus we didn't want to be anywhere near it at the time! Apparently this is one of the more popular put-in points on the river and the DNR has been promising to improve it, but - well - they haven't gotten around to that yet.

Once there we had to line up single file in the dirt track, shuffling forward one kayak length at time while kayaks, and passengers, were slid into the river one at a time. This made me glad I left my Sea Eagle Fastrack in the Van and rented one of the yellow plastic tubs along with everyone else. I could just imagine the angry crowd piling up behind me as I went about the 15 minute process of blowing up my transportation! Though I did end up wishing I had brought my own paddle with me. The rental paddle I ended up with was heavy and not very well balanced! 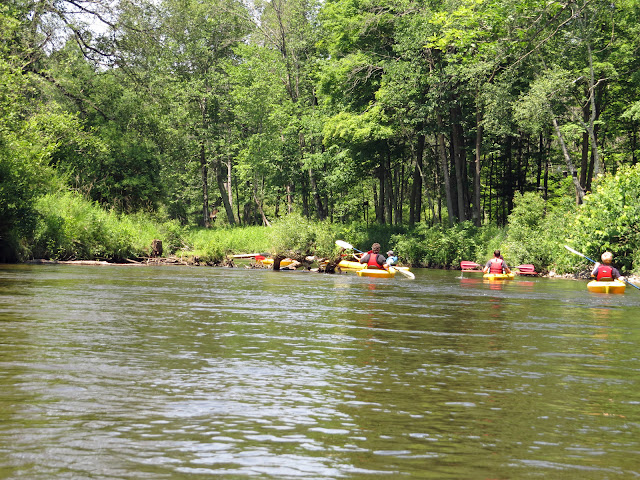 Eventually we were all in, on, (OK, for the moment on and not in, but that didn't last.) the water and didn't give another thought to the short-bus back there blocking the road.

As a group we had an assortment of singe and tandems along with a wide assortment of experience, from absolutely none, to maybe a little bit. This meant there was bound to be an incident to two on this flat but sometimes boisterous river with it's abundance of snags.

And sure enough, we were only a few hundred yards into our float when one of the tandems ended up hung up on a submerged log, held there by the current which was threatening to sweep them into a nasty snag.

I was in my usual rear-of-the-pack slot and back-paddled while one my siblings, one of the more experienced kayakers of the bunch, doubled back and made a grab for the bow of the hung kayak. This moved it a but but not enough so I aimed for the same spot and gave it a grab too as I went by. Again, not enough, in fact I'm not entirely convinced I didn't make things worse.

While I was doing this, encouraged by that first, near-success, my sibling was circling around again and made another valiant try, only to end up crosswise in the current and getting dumped.

Man down! And only a few minutes into our journey!

Now when you have people stuck in a kayak on a log as well as people in the water frog-kicking past you towards the bank, you go for the ones in the water! With one of us standing knee deep on a mucky bank and the other thigh deep in the water, we managed to empty most of the water out of the overturned kayak and make it river-worthy again.

In the mean-time the hung up tandem was freed by it's occupants and all was well, except one of us was a little wetter than before. 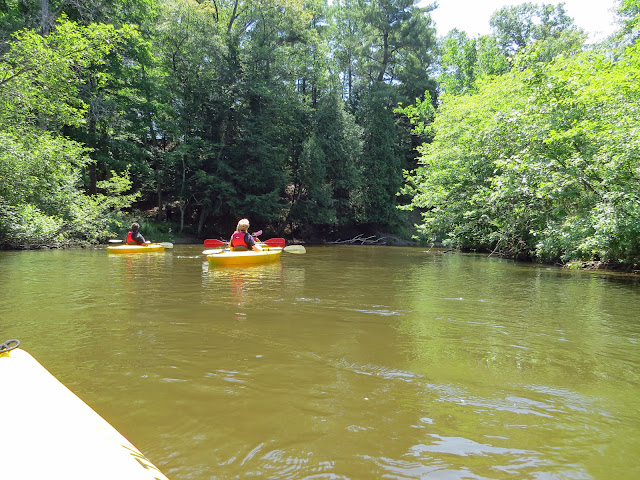 OK, a little genetic side trip here. My father was, among other things, extremity picking about his hair. As a boy the very first 'tool' I was required to have with me at all times was my comb. I carried that comb to the dinner table, church, school, during the dirt-ball fights we used to have around the fresh-dug basements of the neighborhood, fishing trips, swamp excursions, tree climbing, cross-county bike riding, even to the beach! Even after buzzing my hair off to stubble, it still took a while before I felt right without that comb in my pocket.

Anyway, this inborn, undeniable trait has been passed down to at least one of his children. (You want to start a fight just ruffle that head!!) Of course that happened to be the sibling that went into the water! But through the entire incident, getting unceremoniously dumped by the current, guiding the mostly submerged kayak around a snag, through the moving water and to a quite place on the bank, finding a spot to stand where you didn't sink, getting the damn heavy thing turned over and dumped out but only after a couple tries, and re-entering said kayak, not a drop of water this siblings hair did touch!! 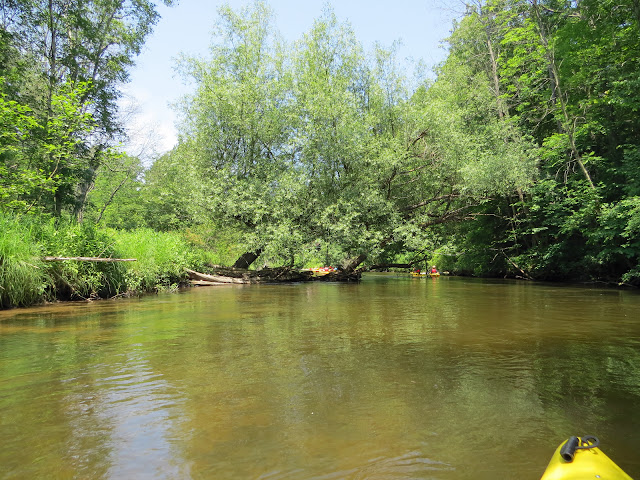 But wait! We weren't done with 'adventures' yet!

Tandems are difficult things to handle, especially if you haven't practiced as a pair. In fact, some call it the fast-track to divorce. Though my nephew's wife had the perfect attitude for tandeming, which was to sit up front, lay back as far as the molded seat will let you, keep your paddle dry and make occasional, yet still mild, comment only when your rear-seat guide runs you into the bank or under low hanging branches. So it was almost ordained that somewhere further down the river we ended up with a tandem getting crosswise and going under a snag. Not a low hanging log but a full-on, in the water snag! 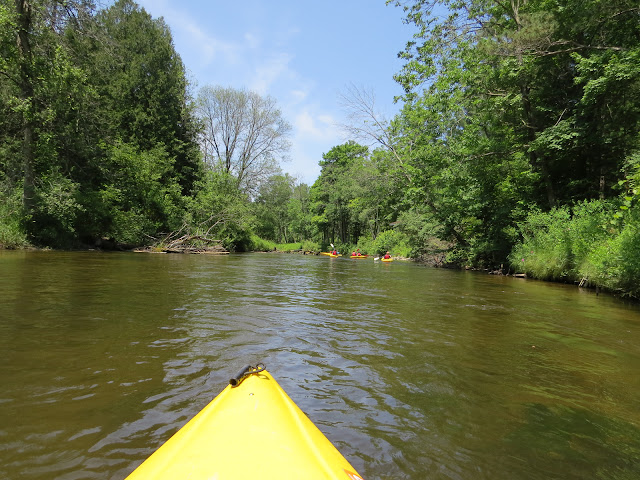 The kayak popped out the other side, and eventually so did the former occupants, though the kayak wasn't coughing and hacking near as bad as the occupants after swallowing a good portion of the river.

But eventually we got that sorted out too. We even managed to eventually locate the missing sandals so the only long term casualty was one of the rental company's seat cushions and I wouldn't be surprised if they didn't station an employee further downriver to collect bits like this as they float by.

The next, and last, great excitement of the trip was when we passed a gaggle of girls, college age I think but at my age I'm having trouble telling just how old young people are anymore, who had pulled their inflatable rafts up to the bank while a couple of the lesser dressed ones played in the water. And yes I looked. It's my opinion that if they didn't want to be ogled they wouldn't dress that way in public places so, being the nice person I am, I willingly obliged.

In all we 'floated' about 6 miles of the river and survived, in fact most of the trip was pretty peaceful interlude through largely untouched north woods. A nice punctuation on our weekend gathering.

I used the word floated in the previous paragraph but put it in quotes because the concept of float might be up for interpretation. You see, there runs a streak of competitiveness among some in the family that manifests itself in car, snowmobile and dirt-bike racing that has resulted in a number of championships. In other words, some of us feel the need for speed more strongly than others and I spent much of the trip completely out of sight of most of our crowd. In my defense, nobody told me there was a checkered flag at the finish line.

Which is a partial explanation for the brevity of photos in this post. But only partial. Another reason is that, a waterproof Go-Pro being beyond the budget at this time, in order to take a photo I have to first retrieve my agua-phobic camera from the dry-bag, fire it up, take the photo, shut it down, return it to the dry-bag, then roll and clip the bag to keep it - well - dry, all between paddle strokes, splashes, rocks and snags. (Which is why all the photos show a fairly placid river.)

The other reason is that many of my photos show identifiable relatives and - well - we just don't do that here in this blog.