That'll Get Your Attention!!


OK, I think my hands have stopped shaking enough to handle the keyboard with some degree of accuracy, so here goes:

Here it is, the waning days of October. We're getting ready for Samhain (Pronounced sa-win, an ancient harvest celebration that most of us nowadays call Halloween) and, with a short reprieve due to the spring rains after years of being featured on the official drought list, we've been re-classified back to Sever Drought around here. Our average rainfall for October is about 4.5 inches, but it's been 33 days since the last measurable rainfall.

Or at least it was until the wee hours of this morning.

It started storming, and storming hard, around 3 this morning, with near constant winds slapping the trees around, lightning burning through the closed blinds and thunder rattling the windows,  but by 8 it was finally showing signs of letting up.

In fact it let up enough for the DirectTV signal to get through in time for the last forecast of the morning news out of Austin.

But in hind sight I think we could have done without that since it wasn't very encouraging.

Seems today's rain was just a warm up and the main event is coming tomorrow. In fact they say we have the remnants of the strongest hurricane ever recorded pointed right at us. Patricia will come ashore on the west coast of Mexico today and tomorrow, before it dies off, will suck that tropical moisture right up into our area. (I knew a Patricia once. She was a little scary but I didn't think she was all that bad!)


But a few inches of rain aren't what had my hands shaking. I mean I've been out here for 12 inches in 6 hours before, so today's rain wasn't earth shattering. But it was tree shattering. . . 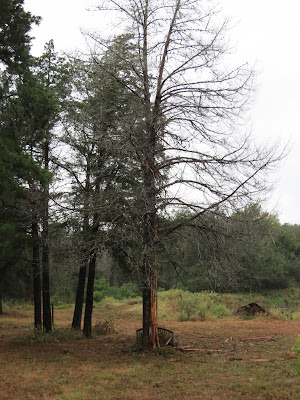 The rain had let up and I was out under the awning on the side of the travel trailer minding my own business, just doing normal things like transferring a few buckets of rainwater into a storage tank and smugly listening to the occasional faint, way-off, rumble of thunder heading the other way, when a dead cedar about 65 feet from where I was standing exploded! 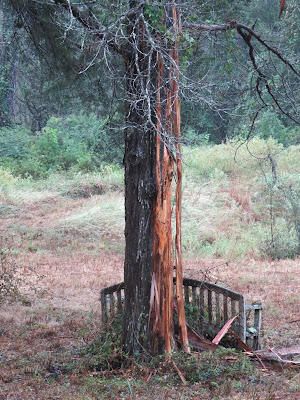 It has been dead about a year and a half and had about 6 months more of draining and drying out to do before we took it down and turned it into slabs for counter tops and blanks for turning projects. But I guess there's not much lumber left in there now since the tree is cracked almost all the way through the full length of the main trunk and what's not cracked is splintered and fried. . . 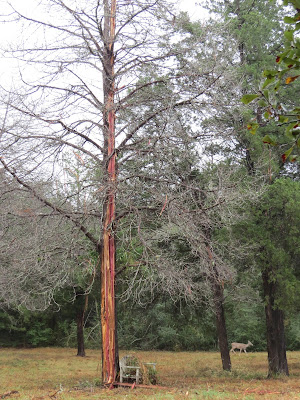 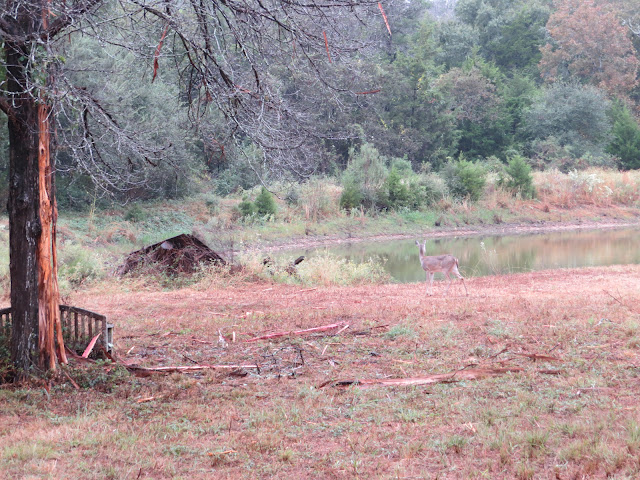 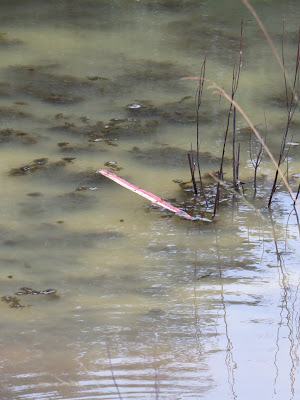 As lightning strikes go, I suppose those in the know would classify this one as a really small one, a baby strike, but I have to wonder just how many of those in-the-know experts have ever been standing 65 feet from a lightning strike, baby or not.Though they would have had to tell me by sign language since my ears didn't appreciate that whole thunder-clap thing at all and went on strike.

Baby or not, it was impressive and sent splinters flying everywhere.

Even the deer were impressed and had to come take a look. The one above is more interested in checking out what ended up in the pond than worrying about me wandering around with my camera.

But more impressive than the scattering of hand and arm sized chunks of tree or the foot wide crack that goes down through the roots deeper than my arm can reach, was the 6 and 7 foot splinters that ended up over near the tractor barn. 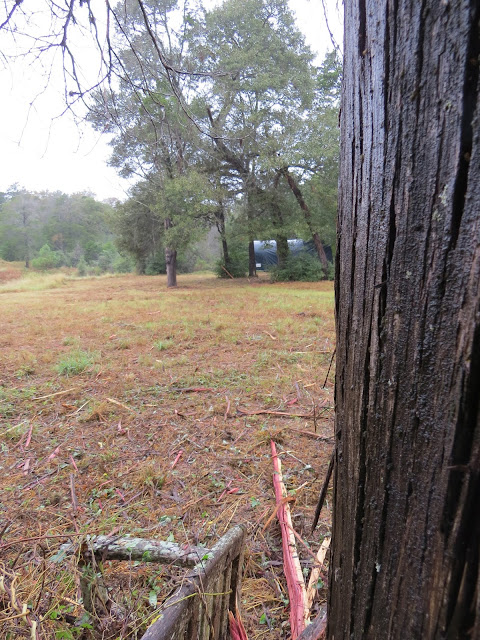 If you look out into the distance in this photo you can see a diagonal line at the base of one of the trees. 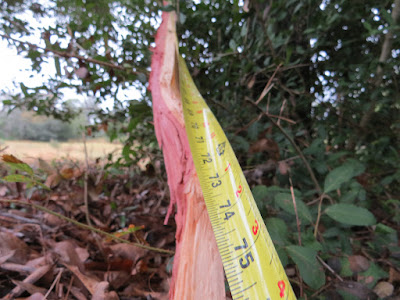 That's a 6 foot-plus splinter that ended up about 95 feet from ground zero.

I think it's going to take more than a sterilized needle and a pair of tweezers to take care of that! 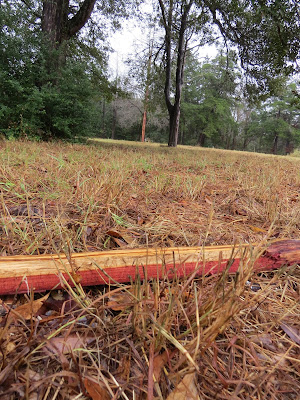 But even more impressive is this long-range weapon of mass destruction that ended up about 120 feet away. (You can see the scared lightning-struck tree in the distance there.) 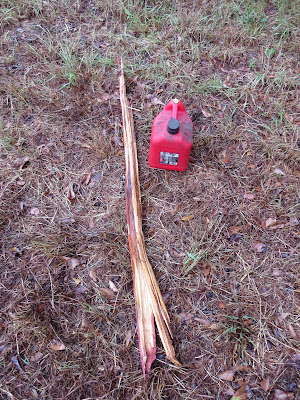 It measured out at 7 foot 5 inches and with the 'feathered' butt it just might have flown there very spear-like. Scary!

I'm glad nothing, especially me, was in the way!

So the big question is, did I see it happen???

Truth is I didn't see a damn thing because I was too busy curling up into a little ball under the trailer and kissing my ass goodbye. . .

Now, some 8 hours later, my hands have stopped shaking, but I wonder when I'll get my hearing back. . .