Behind the Wheel but Goin' Nowhere


Yep, just spent about 4 hours behind the wheel and went - well - absolutely nowhere.

We are blessed with a really nice bit of land here and prefer to let it do it's thing as naturally as possible. No lawn, (Just the thought makes me shudder. . .) and the only deliberate plantings we have are in pots. But of course just the fact that we're here upsets the natural balance of things.


We have a driveway and a couple barns which disrupt the natural water-flow, concentrating runoff in some places and leaving others without. Out of self defense we're forced to do some ant control in the immediate vicinity of the buildings. (By the way, I've found that using about a quarter of the recommended dosage of ant killer works just fine, but what do you expect when the people profiting from the sale of it are the ones telling you how much of the product to use.) And we certainly don't let the occasional wildfire run - well - wild.


Because there's no cleansing fires the Yaupon, in our case mostly the Holly variety,  grows rampant. Also, sometime in the past someone brought a Chinaberry into the area. (And if they did that on purpose I hope they're ashamed.) When we bought the place there was actually a 50' tall Chinaberry tree here, which, given the weak nature of Chinaberry, was pretty remarkable. That tree is long gone (Didn't want the dang thing falling on our heads.) but that doesn't stop others from trying to get a start,and since the things grow fast, if left alone for a couple years shoots can get 15' tall and up to three inches around. 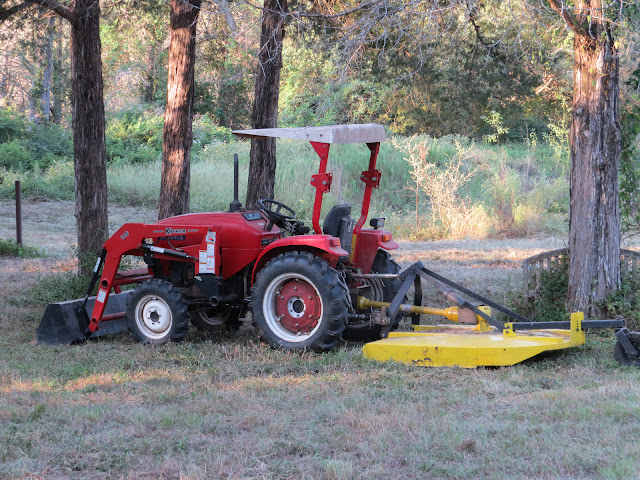 aka, our tractor with the 5' brush hog attached. We drag this out every one or two years depending on the rains.

This is not a fancy tractor with airconditioned cabin, dolby sound system and hydrostatic drive. Our tractor is a 1950's design built in a 1970's era factory, shipped over from China in a crate and assembled in a garage. It has straight-cut gears, no syncro's, a two-stage clutch with springs that will lift you right up off the seat, push-rod brakes that won't quite hold on anything more than a 5 degree slope and if you don't keep the hundred or so bolts and nuts tightened regularly she will shake them loose and shed parts at the most inopportune time.

But she is affordable and a loyal workhorse that can use the 3 cylinder 20 HP engine and 4-wheel drive in low-1st to push over trees and pull herself out of 2 feet of mud. (She's also supposed to be able to hit 15MPH in high-3rd but I'm pretty sure trying that on anything other than a freshly paved road would be suicide!) 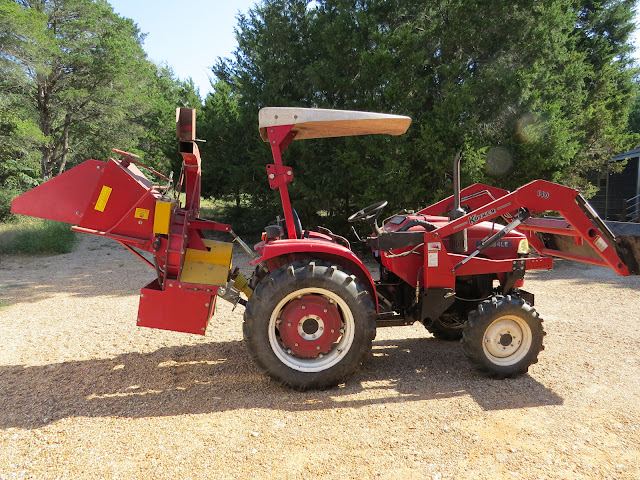 Normally we keep the chipper hooked to the tractor. We use that quite a bit more than the brush-hog and the chipper has a pretty dang big flywheel in it making the whole thing weigh about 500 lbs. so it acts as a nice counter-balance when using the bucket on the other end of the tractor. 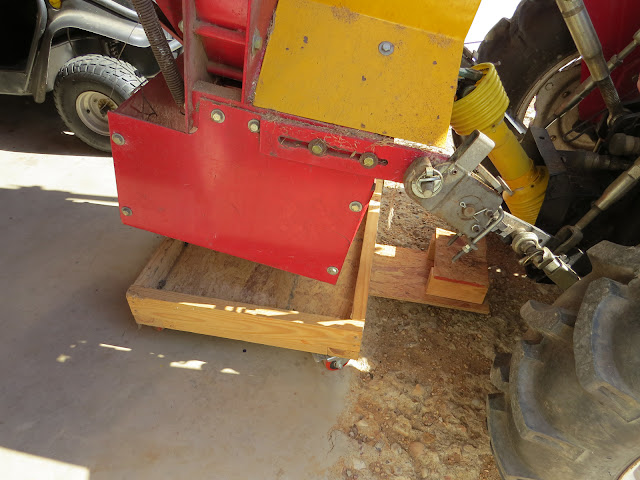 I know from painful experience that setting the chipper down on anything other than dead level ground makes it very difficult to hook back up to again without undoing and readjusting just about every linkage there is on a 3-point hitch, so I built this rolling platform for it to sit on when not attached to the tractor. 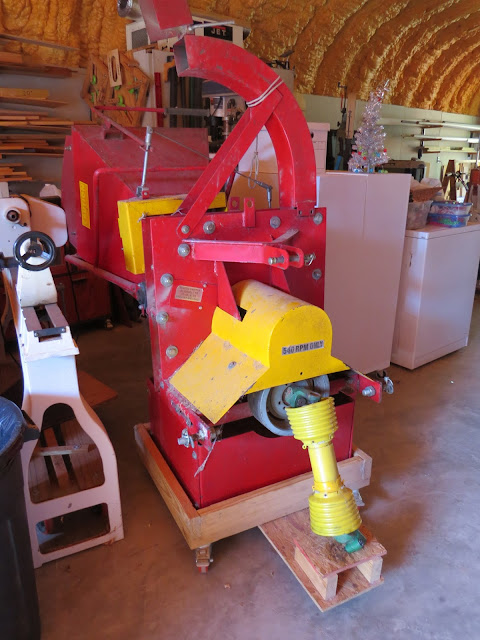 That way, once I get it loose I can roll it out of the way somewhere and hooking it back up is not too much of an ordeal. 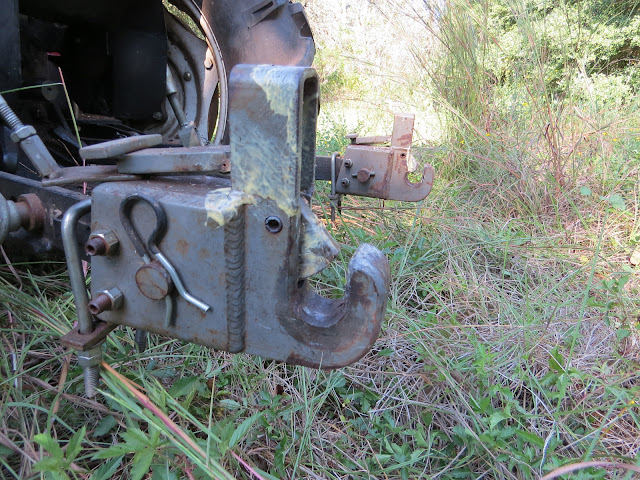 These quick-connects on the ends of the three-point arms sure do make changing implements simpler! 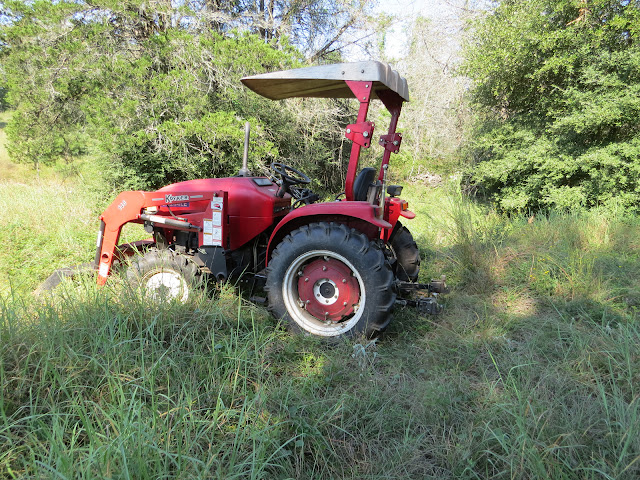 OK, chipper is off, now where did I leave that brush-hog??? 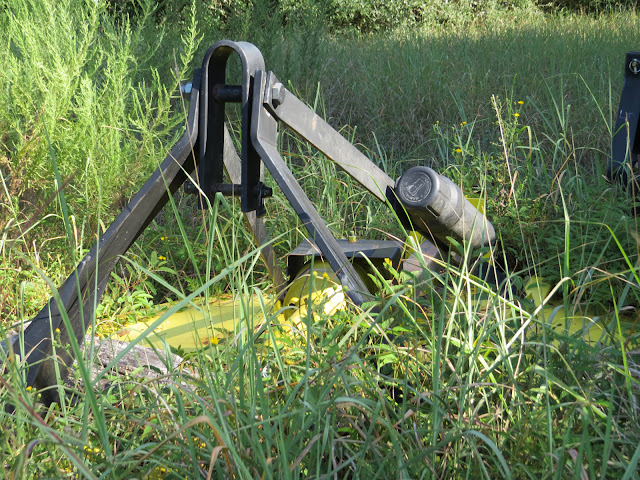 Oh yeah, there it is. 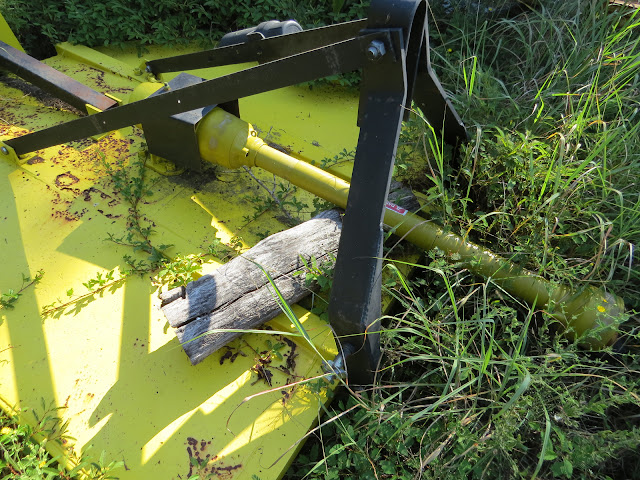 A brush-hog is an overgrown mower deck fitted with a stump-jumper, a big heavy disk, to which a couple of really big, heavy blades are attached with pivots. You might think that getting under there with a grinder and putting an edge on the blades would be part of this whole process, but the truth is, as long as I keep the tractor in low-2nd at about 1800RPM, the dull blades are just as effective at taking down grasses and stuff as sharp blades. (If I try to save time and run in low-3rd at the same RPM I'm going so fast dull blades don't have enough time over any one spot to cut everything completely.) Sharp blades also cut off the tree and shrub stems cleanly which then readily sprout more stems, where dull blades shatter the stems making it unlikely that they will sprout again. 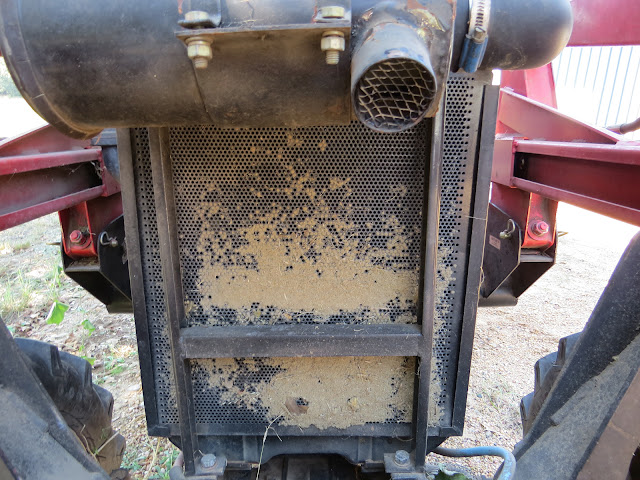 One of the down-sides to shredding fields that are hood-high in plants is that they all try their dangest to go through the radiator. There's this removable shield that helps collect some of the crap before it clogs the radiator, but that only goes just so far and to keep from overheating I have to remove this shield and take the air-hose to the radiator and clear it of a thick coating of dust at least once during the process. 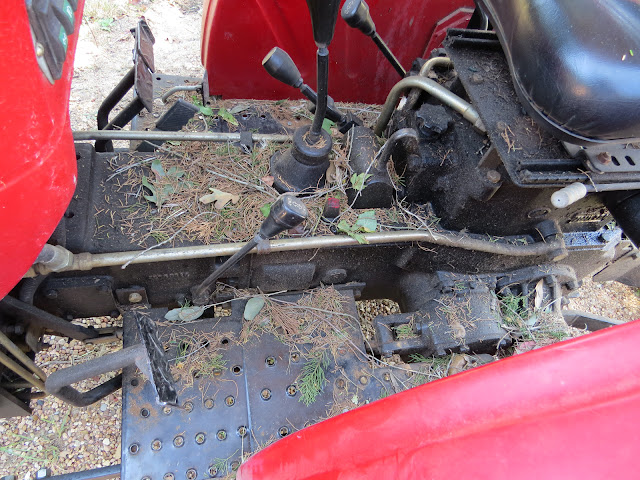 Another downside to pushing the woods back where they belong is that a guy, especially a retired guy that's supposed to be kicking back and enjoying life, can get pretty wore out dodging branches and stuff. One trick I learned early on was to always keep the left side of the tractor shoved into the woods and never the right. The exhaust stack is on the right side and, especially when it's hot, branches will bend it over until it's practically in your lap,which is never a good thing! 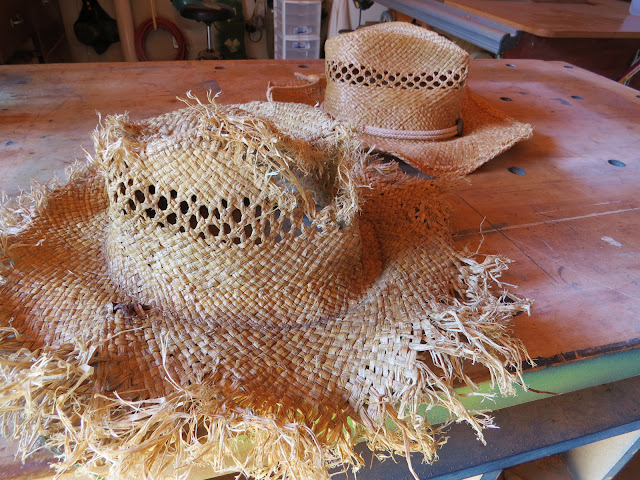 And the job was not without it's casualties, like when one of those branches swept the hat right off my head and under the brush-hog. Fortunately I usually have one or two spares laying around for just this sort of  event. 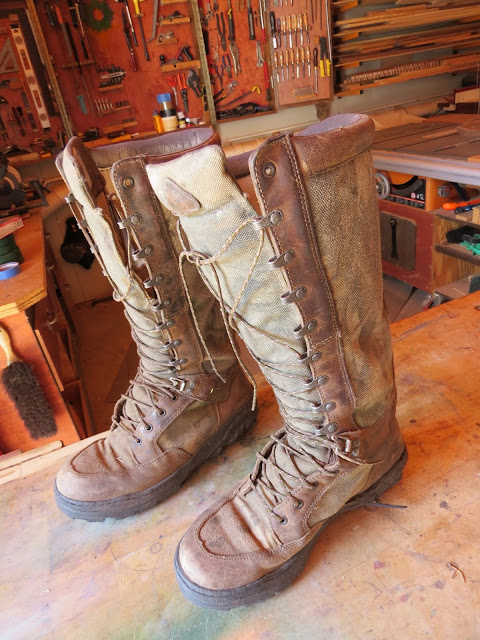 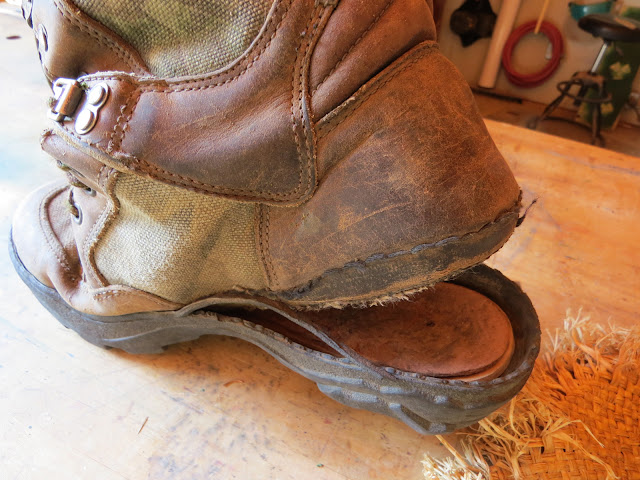 This pair is over ten years old, but I think maybe this job was their last.


But at least that job is done for another year or two. Right now it looks a little rough and brownish, but the woods are back in the woods, the Chinaberry stems are shattered off at ground level, and  in a couple weeks things will be greening up nicely.

Now, (rubbing hands together.) the kids are back in school and the highs are supposed to stay below 90 all next week. Sounds like camping weather is almost here!