For my next hike I chose the West Canyon Loop Trail. 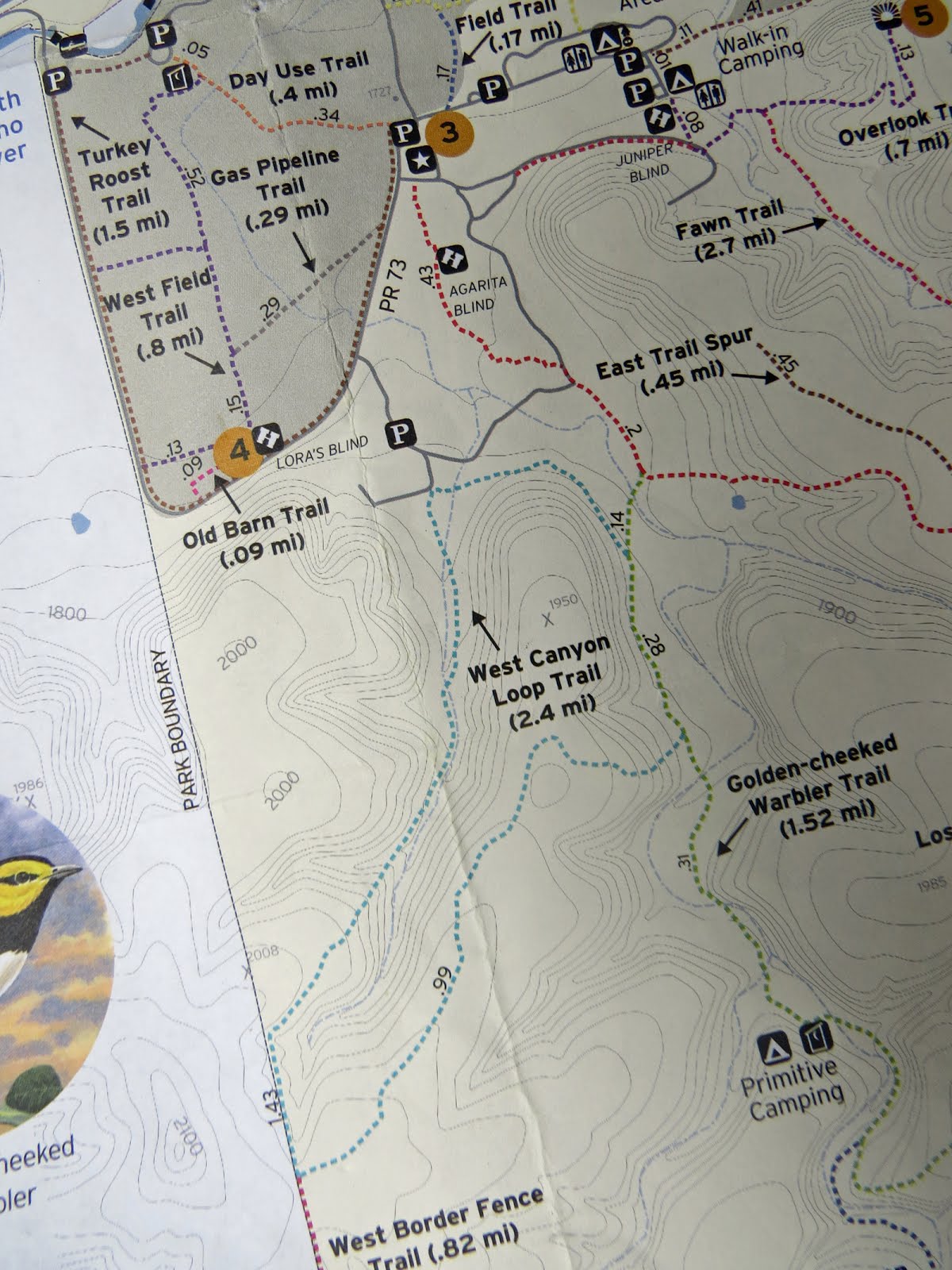 One thing to be aware of with Texas State Park trail maps is that the distances shown in bold for individual trails are for the actual trail segments and are not necessarily measured from and back to a trailhead. For instance the trail I chose for today is marked as being 2.4 miles long, but from my campsite it's a good mile-plus to where the trail starts, and of course a mile-plus back, and it's also necessary to cross a quarter-mile segment of the Golden-cheeked Warbler trail to close the loop.

Point is, pay attention when planning your outings or you might end up taking on more than you expected. 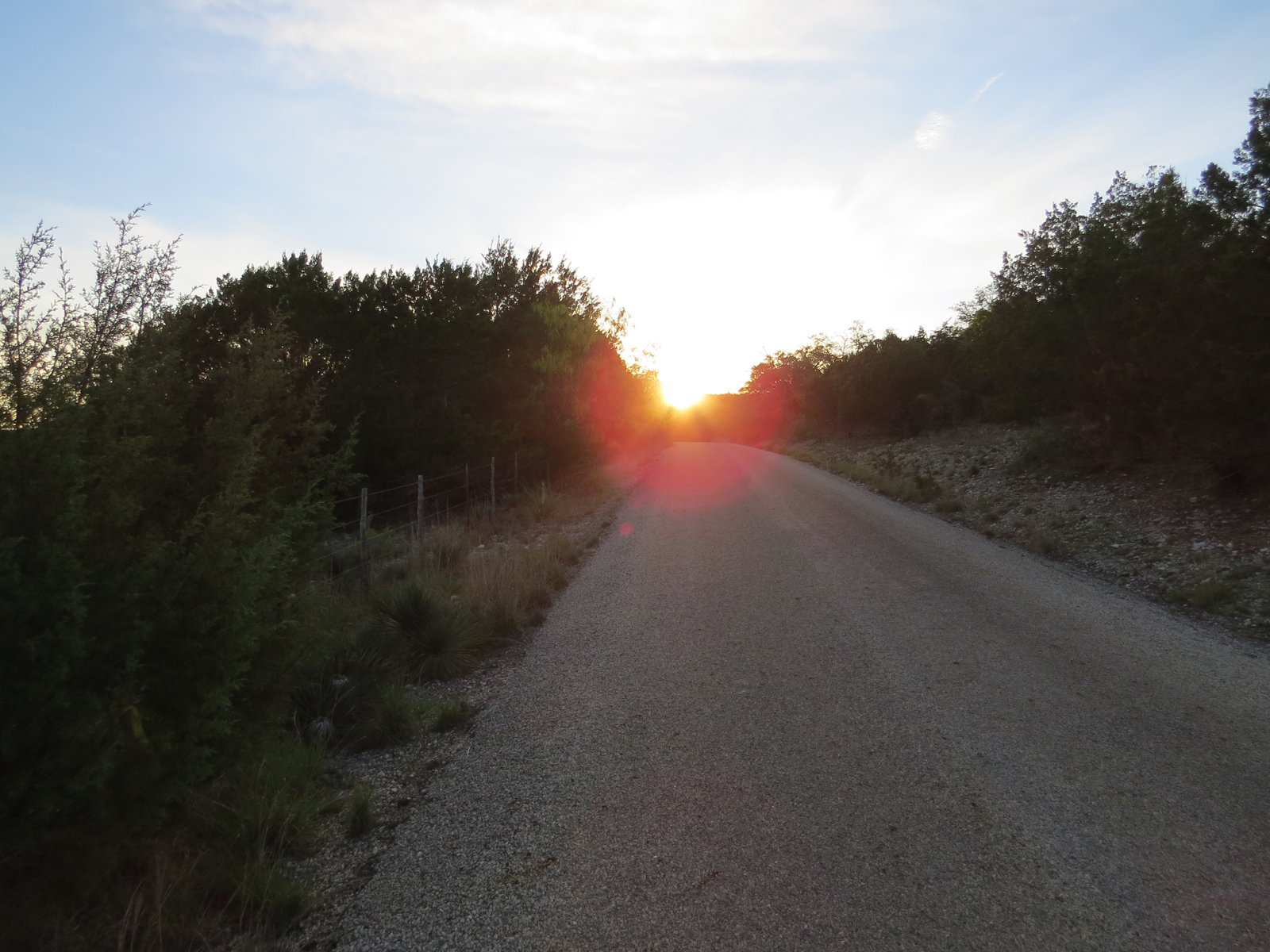 As usual I was out and about early. This shot was taken from an official-use-only service road on my way out to the trail. (Many parks don't mind you walking on these restricted roads and it kept me off the more populated park road.) 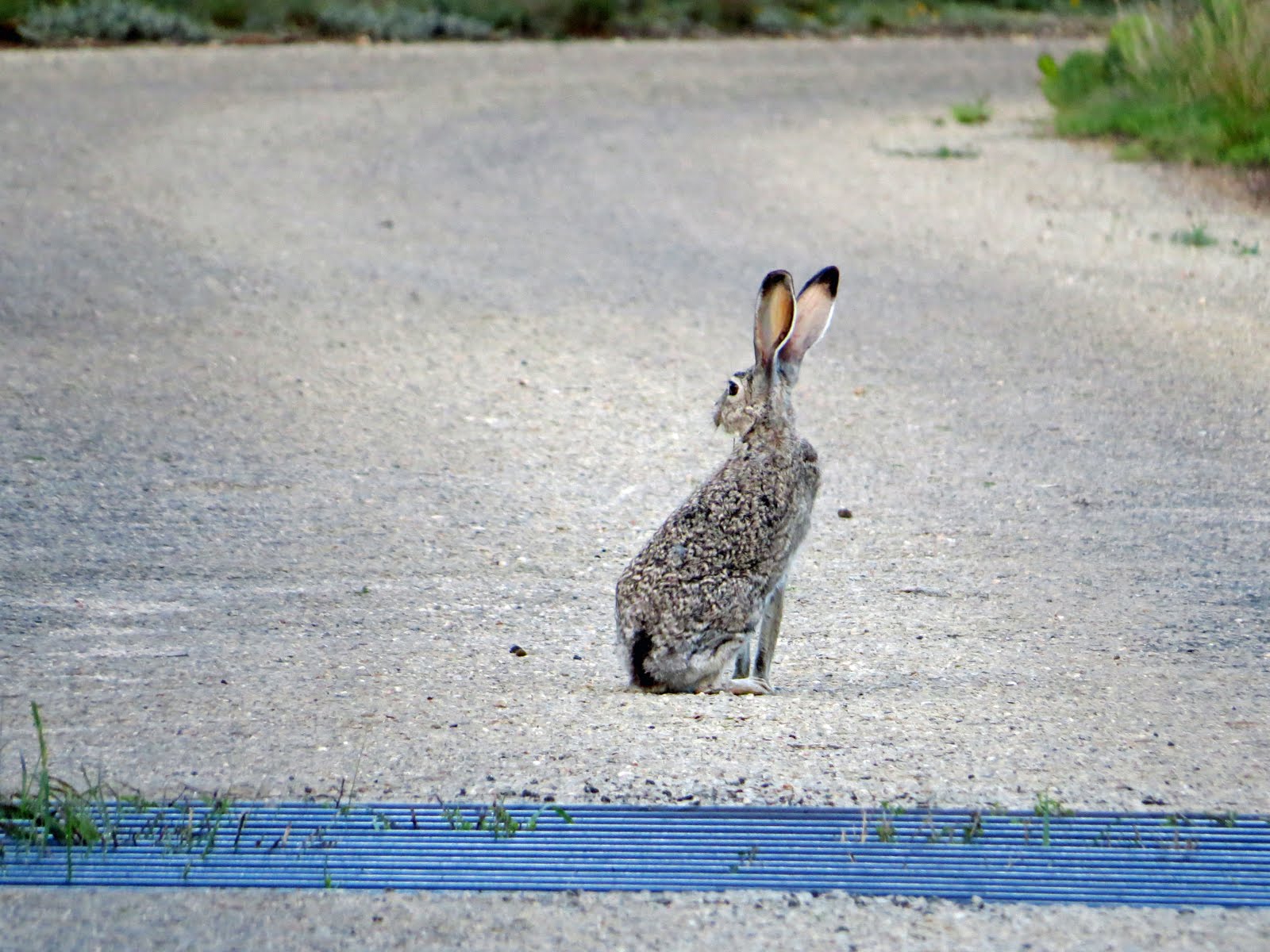 and for some reason this Jackrabbit was also using the otherwise empty service road as the sun came up. 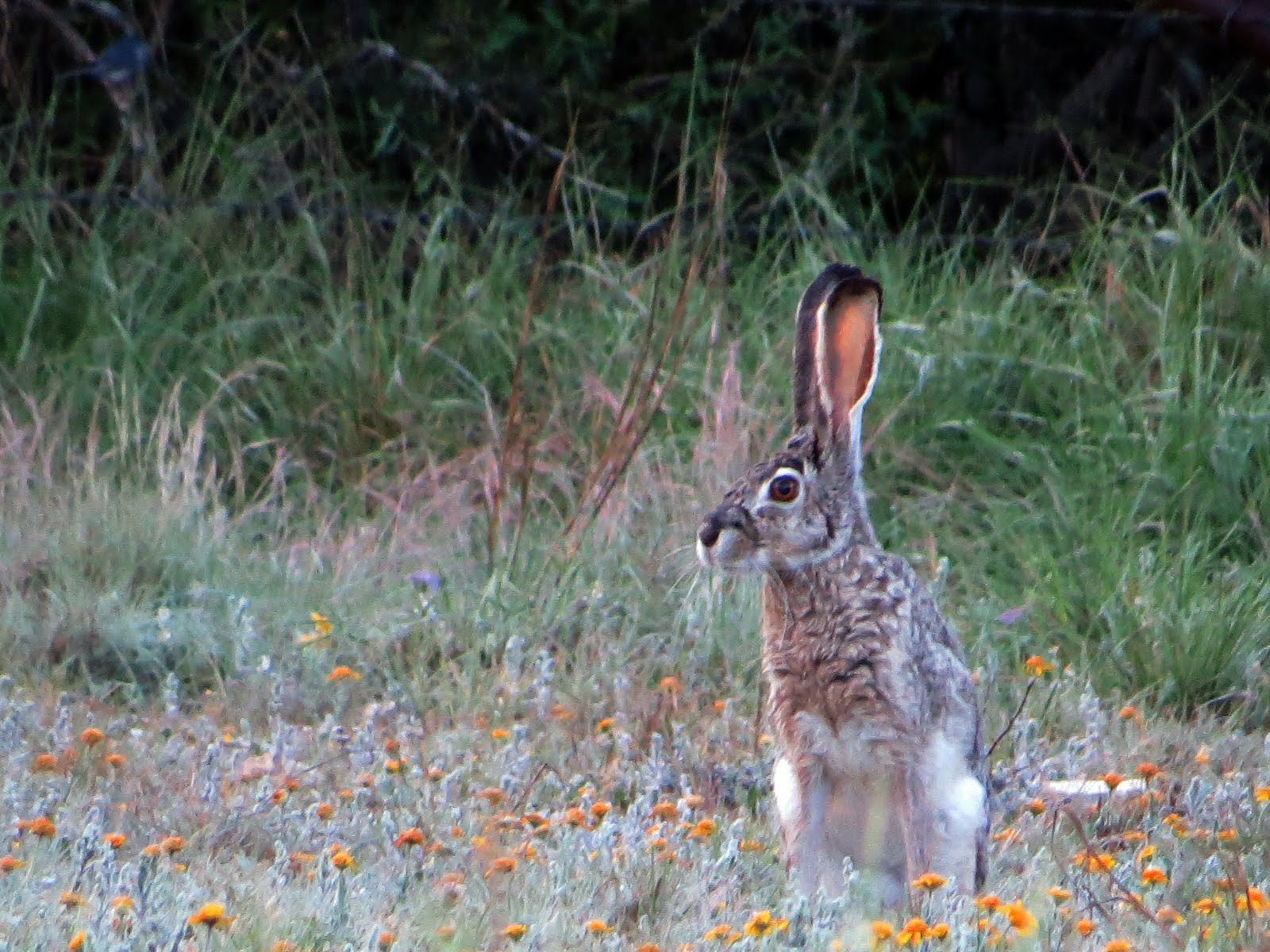 In fact he was pretty insistent about staying on the road and moved along ahead of me in fits and starts for quite a while before turning around and giving me one last baleful look; though I'm not sure bunnies can actually pull off baleful; and moving on to less crowded environs. 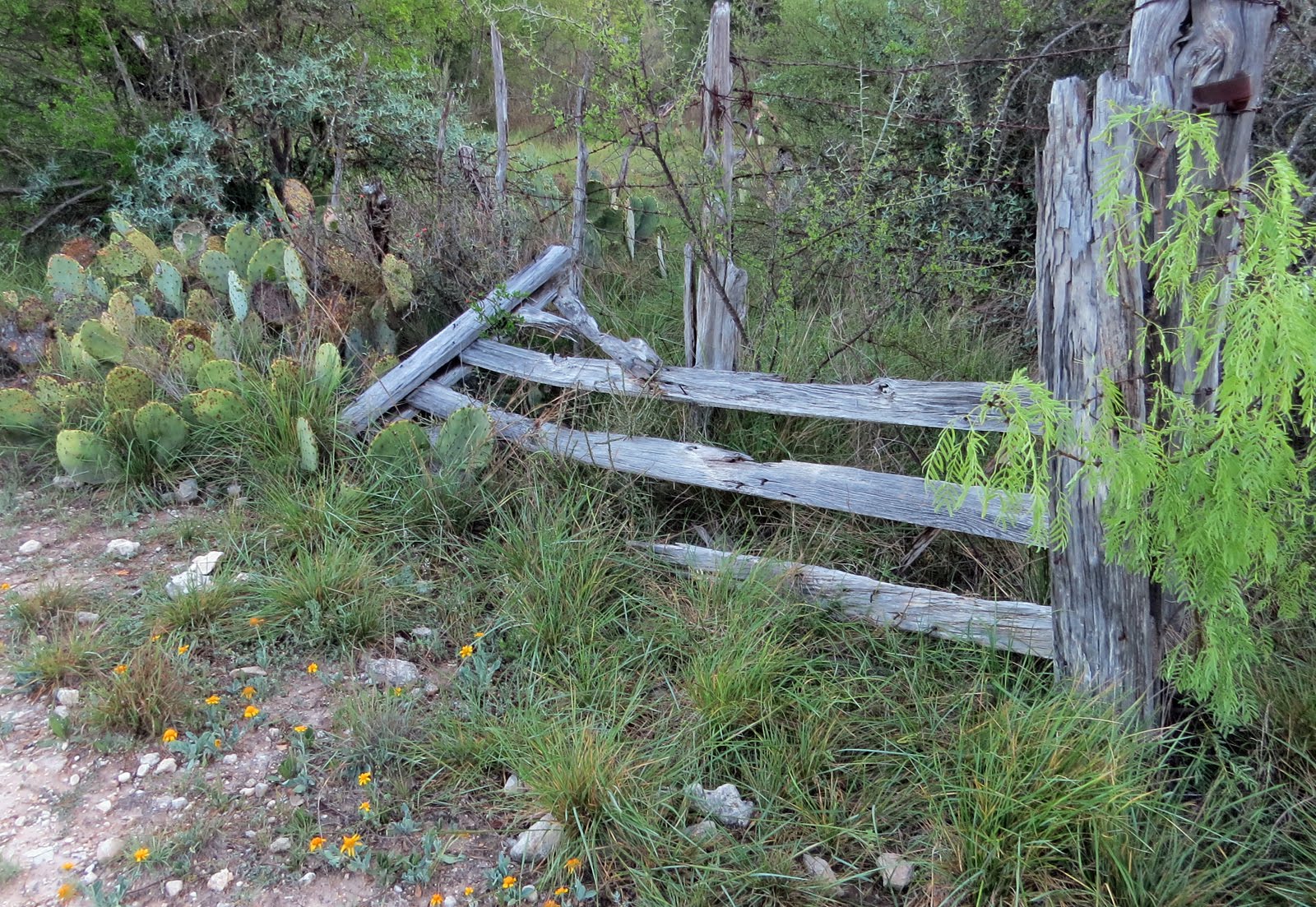 One thing about old ranches is that, unlike geologic timelines, they have history that can be comprehended on our human scale. It was only a couple of generations ago when this gate was built, along with some iron bits picked up at the mercantile, with materials harvested and milled locally. 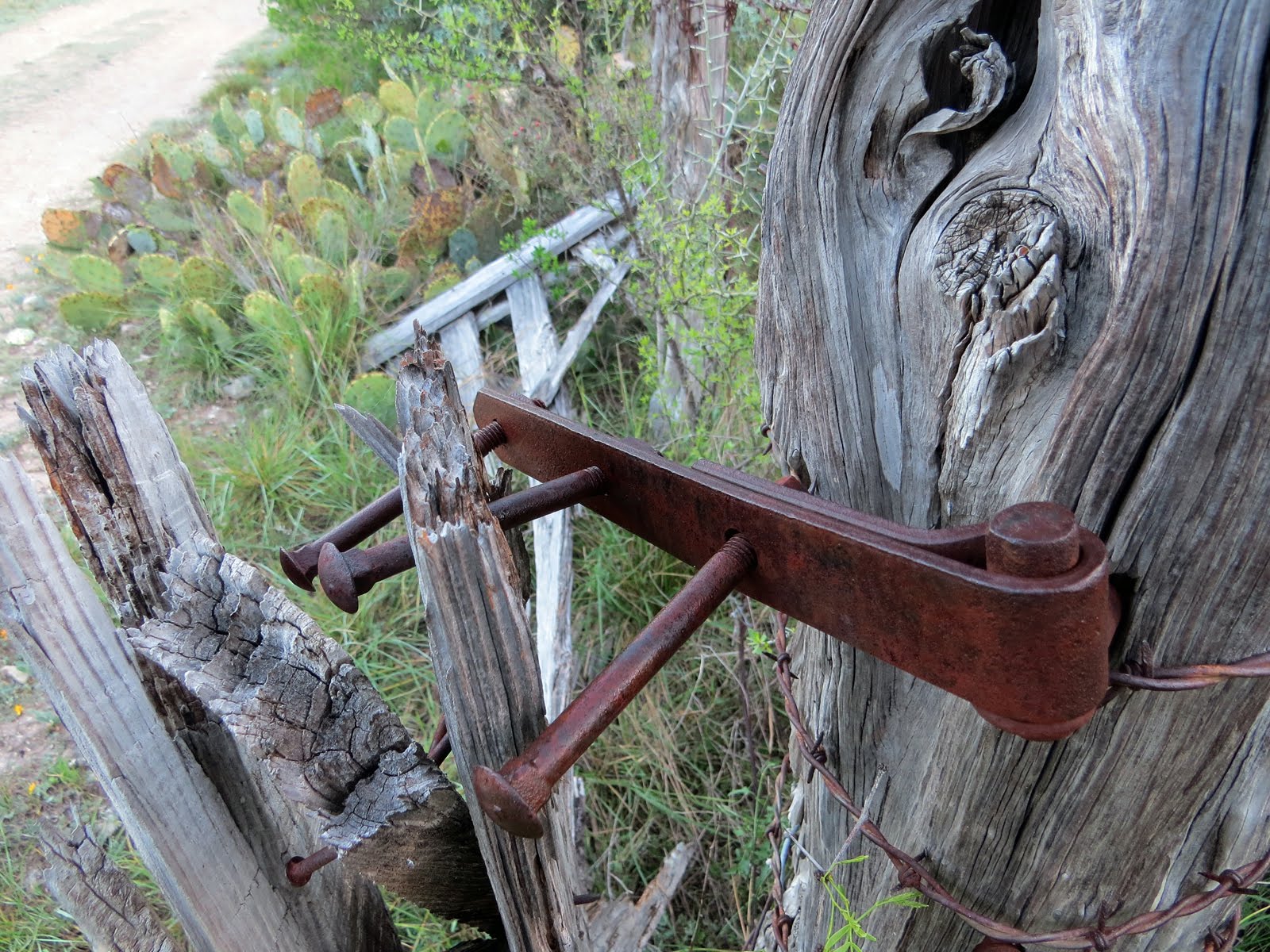 and even less time has passed since it was last used to control livestock. 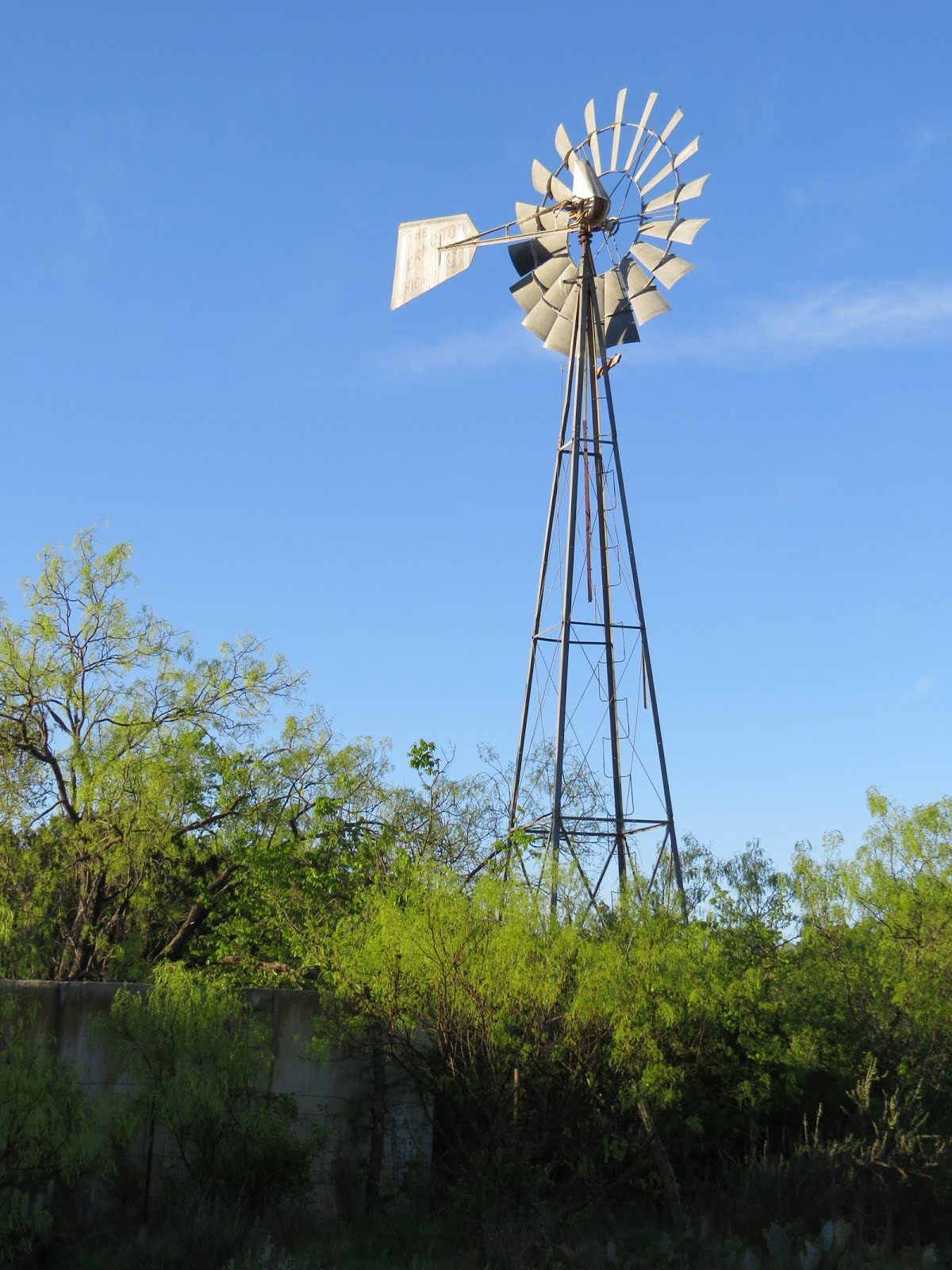 Again, this hike had the mixed variety of lush canyons with water nearby 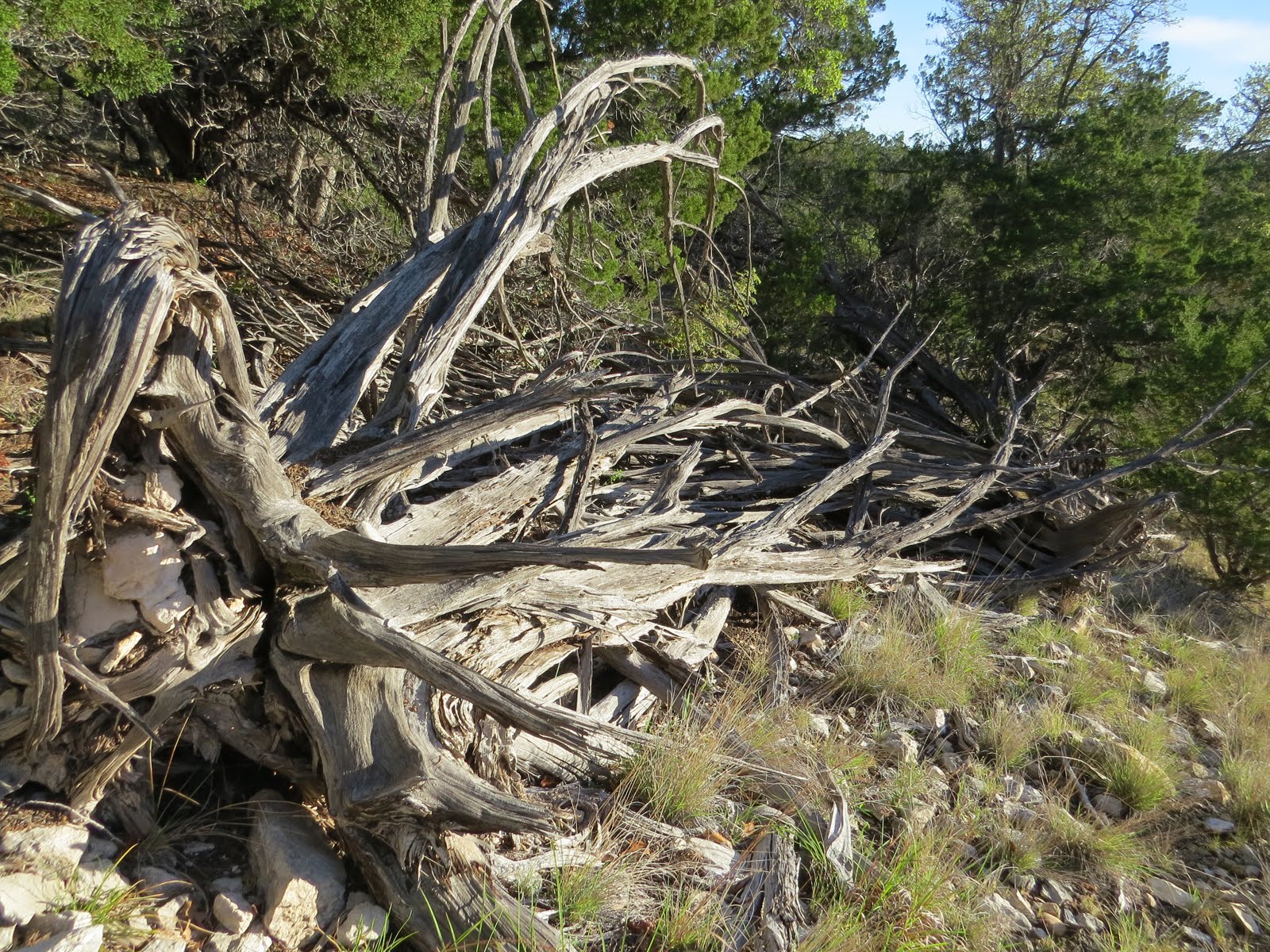 and the more arid ridge-tops. 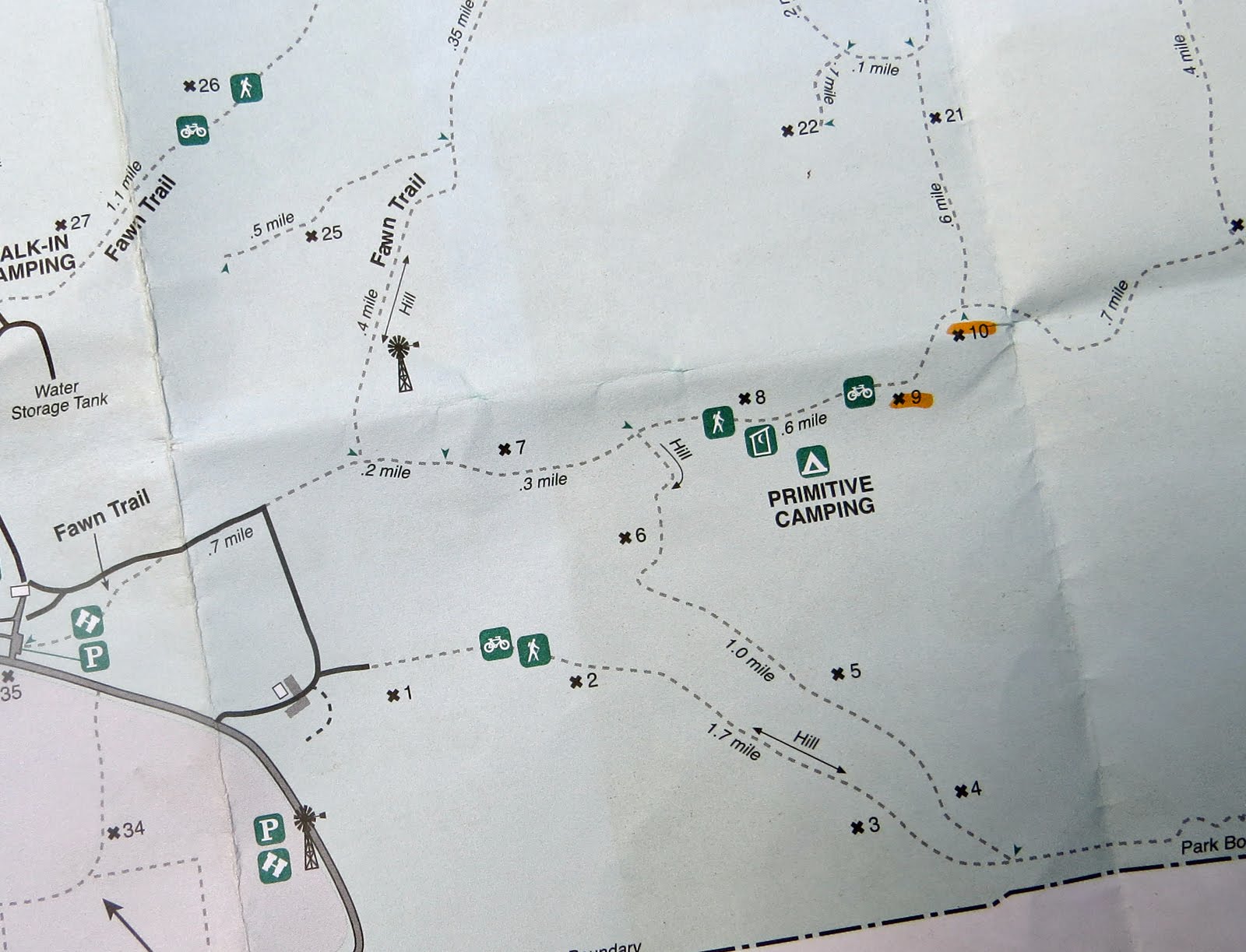 Like many Texas State Parks, this one hosts several public hunts every year, including the annual Youth Hunt where parents are mandatory, as is the Hunter Safety course, but only the youth are allowed firearms.

If you are lucky enough to get picked in the lottery for one of these public hunts you are assigned, and escorted to and from, a fixed blind (Wouldn't do to have the cityfied public stalking all over the hills shooting each other now would it?!)

In this particular park it pays to carry both the facilities map as well as the trail map with you. The trail markings on the facilities map are rudimentary to say the least, but  the locations of the blinds, not marked on the more accurate trail map, are identified on it with numbered X'es. These blinds make great reference points to keep yourself oriented when hiking. 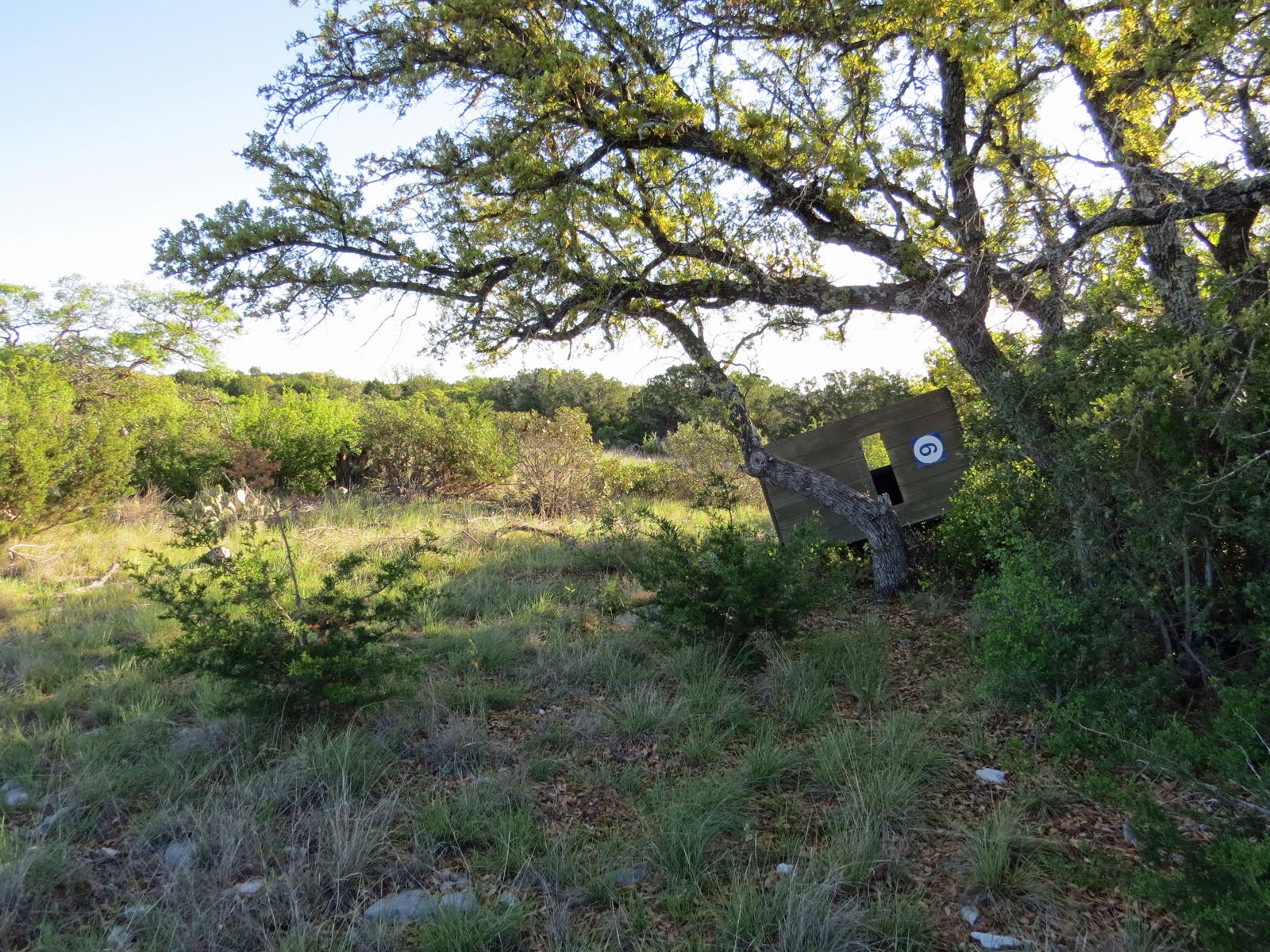 The blinds aren't anything fancy, but after the storm a couple nights ago some of them are going to need a little attention anyway! 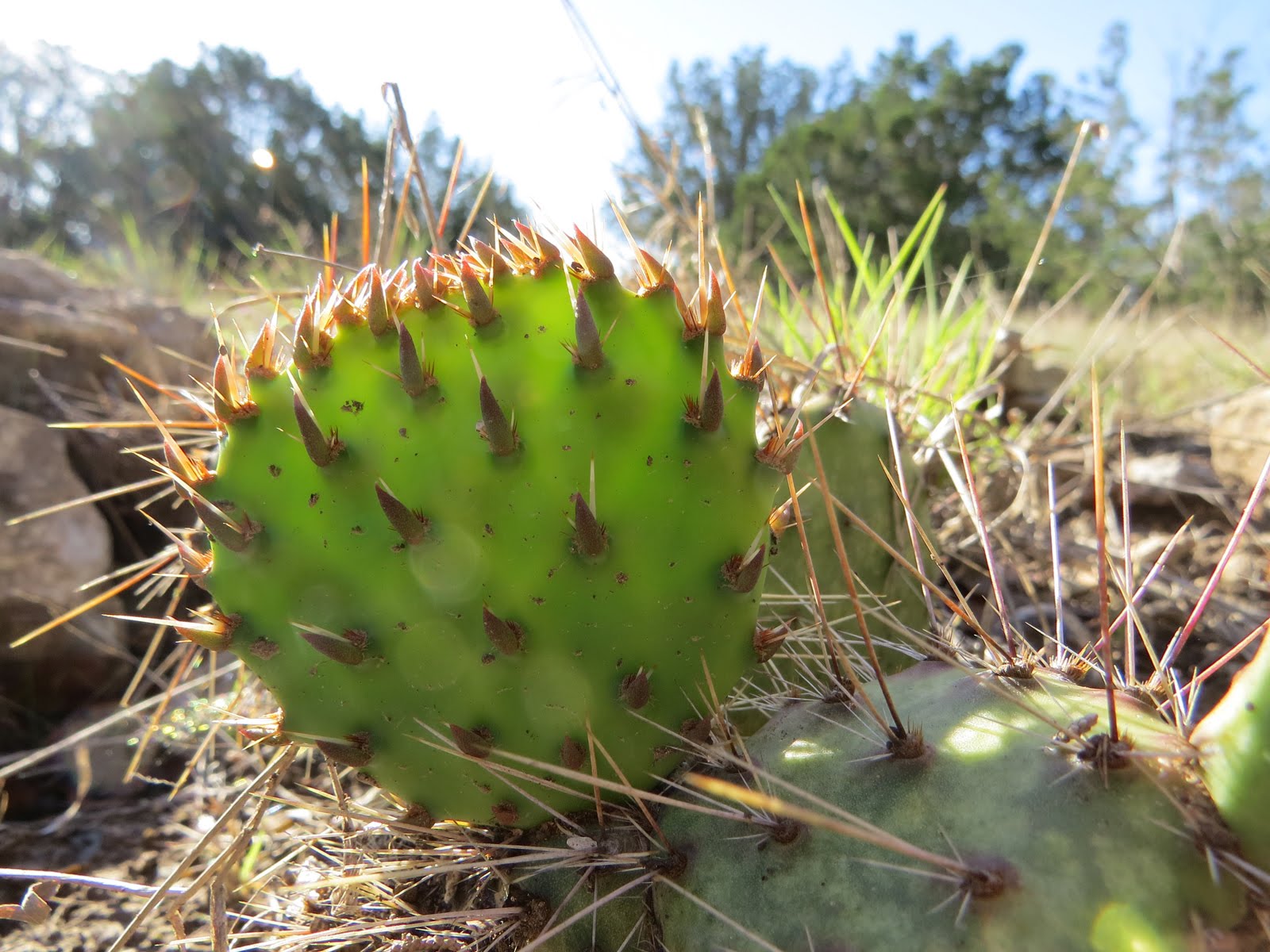 The noon light presents some photographic challenges like flat light and harsh shadows, but even when the sun is closer to noon than dawn it can still produce some incredible lighting, such as here somewhere up on the ridge between West and Mid Canyons.

While I was taking this photo, all crouched down a few feet off the trail in my head-to-toe, blend-into-the-background, khaki hiking clothes, a deer casually crossed the trail some distance ahead of me without realizing I was there then slowly moved out of sight behind a stand of Mesquite as it casually worked on it's mid-morning browse.

I readied the camera and crept forward, closing the 50 feet between me and where the deer crossed the trail one careful foot at a time. I knew trying to channel Daniel Boone was a lost cause since the vast majority of us, with our shoe and pavement inspired heel-banging stride, hard lug soles to protect our soft feet and more familiarity with drywall and Pergo floors than brush and grassy meadows, have long since lost the skills to move quietly, in nature or otherwise, but there was no one around to see me fail so what the hell.

Eventually I approached the spot where I was going to be able to see around the Mesquite she disappeared behind and I slowed even more. Reaching out, toe first, one short, careful, calculated step at a time, gently shifting my weight forward only after I had established firm, quiet(ish) contact so I could take the next step. 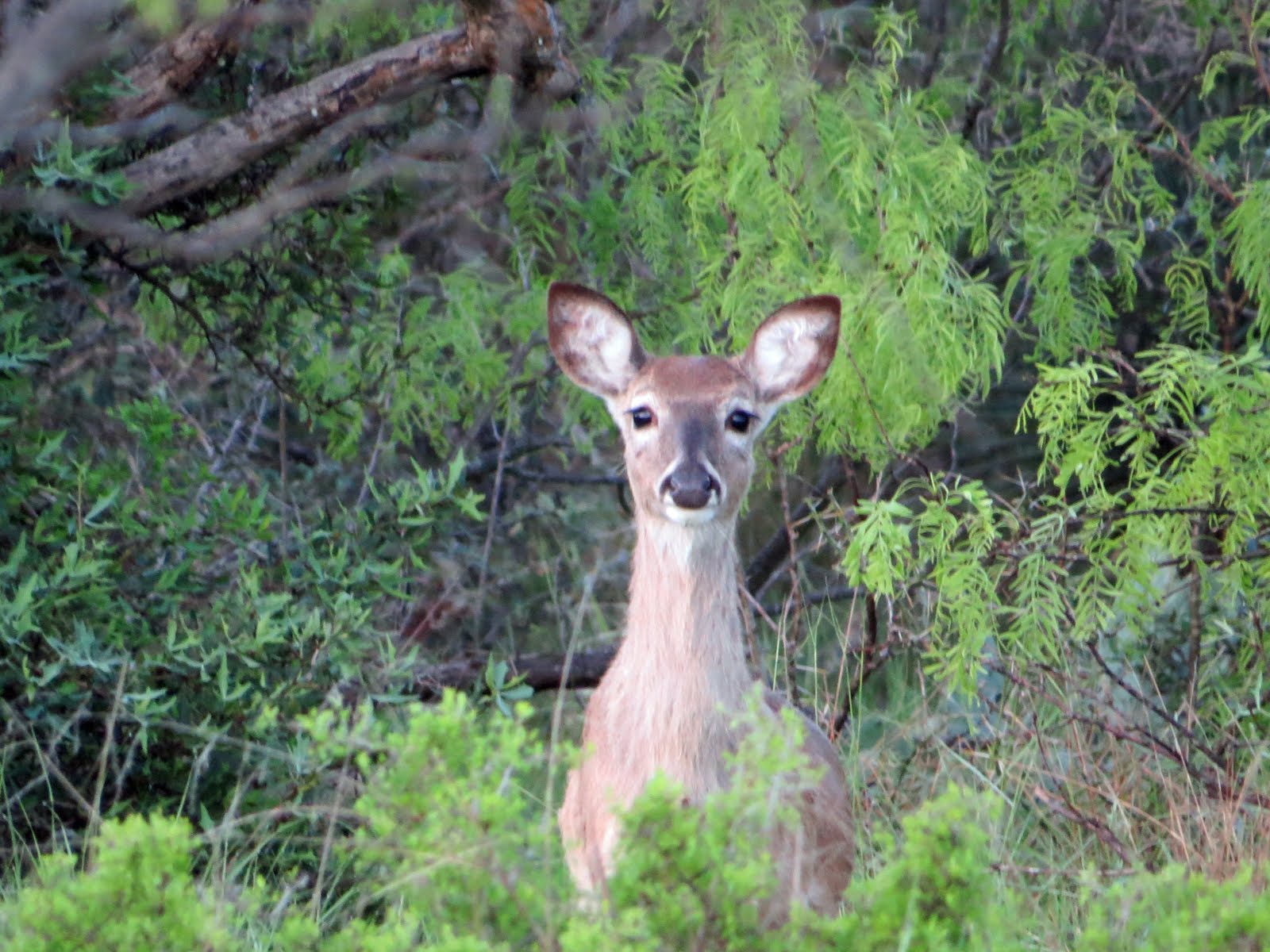 I don't know which one of us was more surprised!

I had preset the camera to rapid fire and got 4 of these face-to-face shots at 10 shots per second before she overcame her disbelief and bolted. 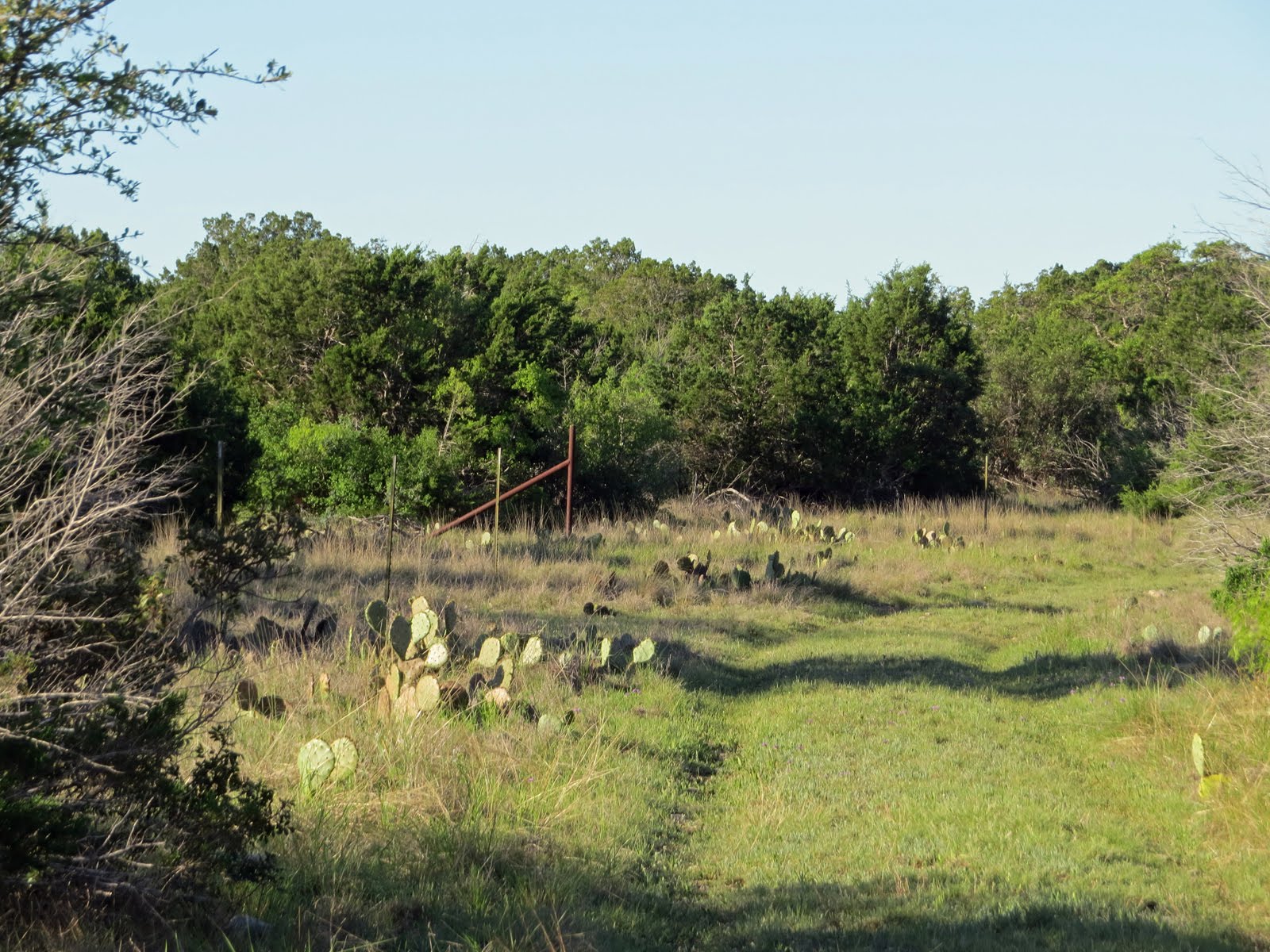 She made a panicked arc out in front of me then approached the fence line from right to left at full speed.

I tried to follow her with the camera and mashed down on the shutter just as she made the leap over the fence with that breathtaking grace that only deer seem to be able to master, but the camera had to think about exposure and focus and by the time it finally started snapping shots it was too late. 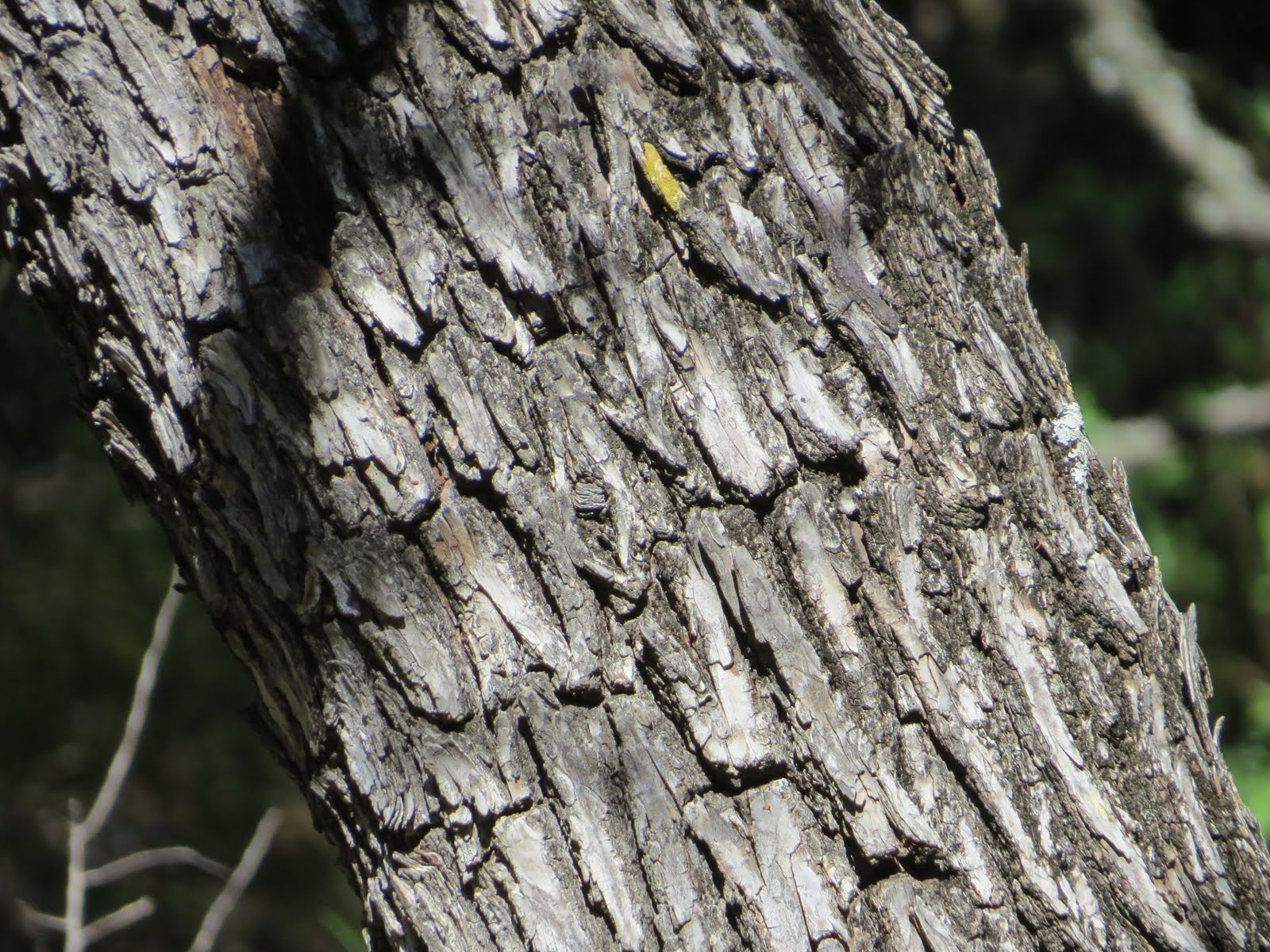 My photographic luck (or skill. . .) wasn't any better later on when I had moved on down into the canyon and caught a flicker of movement against the bark of this tree.

I stood there for a long time waiting for the lizard that had been there to move back around the tree to the sunny side, my side.

Now my hiking gear, including the 4 liters of water that I stubbornly insist on carrying, clocks in at 25 pounds and a measly 1.3 pounds of that is the camera, but that damn thing got awful heavy on me as I stood there!

At one point the lizard did come around the edge of the trunk, but it stopped in half shade - half sun, so I waited patiently for it to move just a little farther. Which it eventually did, but in the wrong direction!

Shortly after that I decided the camera, which by now weighed somewhere around the 20 pound range all by itself, was just too dang heavy and I gave up. (Well there goes my dream of NatGeo hiring me as a photographer. . .) 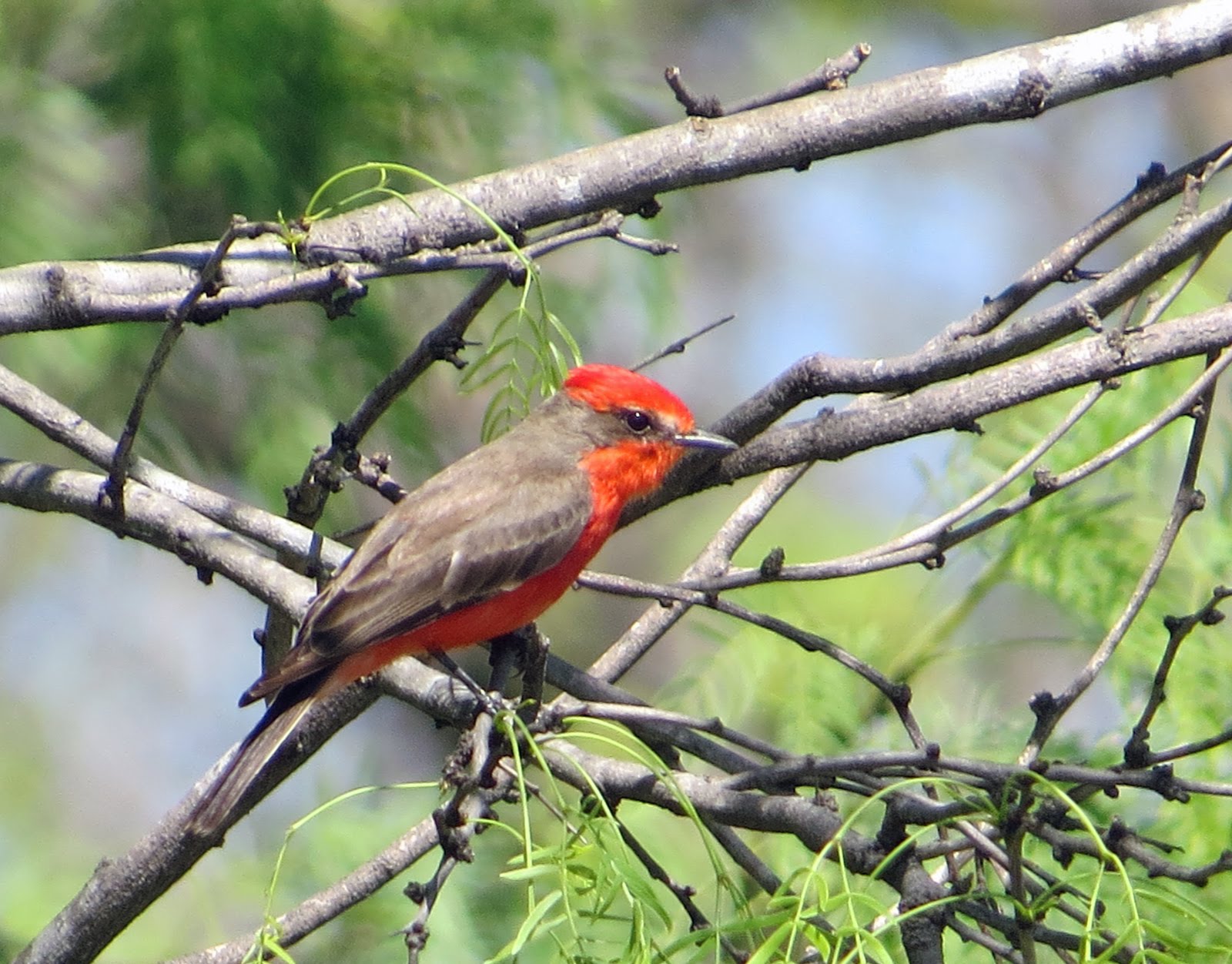 I hadn't taken a half dozen steps away from that tree when I got this shot of a male Vermilion Flycatcher, though I can't help but think that after watching my previous failures at wildlife photography he was just giving me a pity-pose.