It was a beautiful morning. One to be appreciated after all the rain and gloom we've had the past couple months. (I think we've used up our annual quota of 60 days of clouds all in one shot!!)

The sun was leaking through the trees to the east and poking at the gaps around the barn doors so I opened them up and stepped out to just stand there and soak up some D.

That's the point where everything went to shit. . .

Instead of being hugged by some rays I was mugged by an electric coop crew clearing right-of-way a half-mile to the south of us.

Then kicked in the nuts by people talking loud in the vicinity of the gate - probably bicyclists trying to recover after a serious uphill grind, (Doesn't matter which way you come from, it's all uphill to our gate which seems to be a popular break-spot)

Taunted by a single-engine plane snarling through the sky above

And if that wasn't enough, had my head drilled by a truck going by on the county road singing that tuneless knobby-tire-whine.

I was ready to march down there, throw all their tools into the chipper and tell the coop-dudes I'm going to take myself off-grid forever.

I had to hang tight to the nearest tree to keep myself from running up to the gate and marching those damn cyclists back to the city where they came from. (OK so they probably came from a B&B in the town of 200 five miles away, but same thing. . .)

If my arms were long enough I would have reached up and snatched that plane right out of the sky and fed it prop-first into the coop wood-chipper.

And I attempted to use some of that wizardry that seems to popular nowadays to put a thrown-rod hex on that truck. 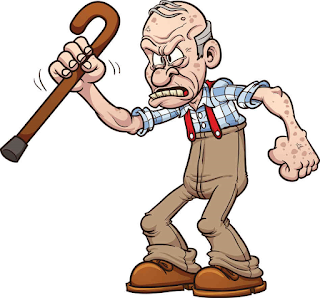 Just when the hell did I turn into the neighborhood curmudgeon???

Though I have to admit, it seems to fit me like a tailored suit.