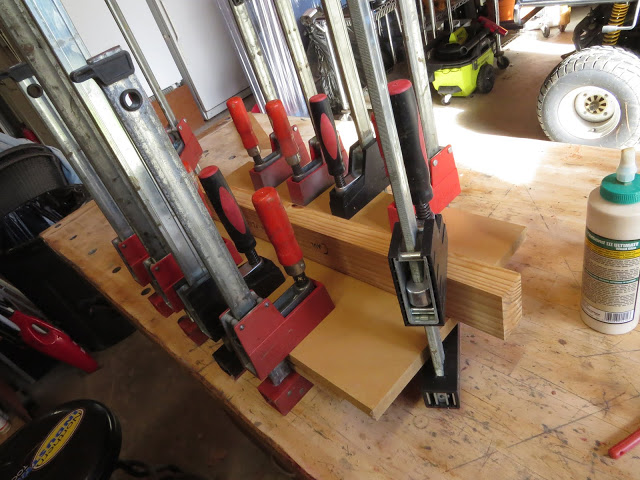 When I left off at part 1 of this post I had just glued my Cedar slab to a substrate and had to walk away while it cured overnight, which was time standing around that I really didn't have since Mom's birthday was barreling down on me. 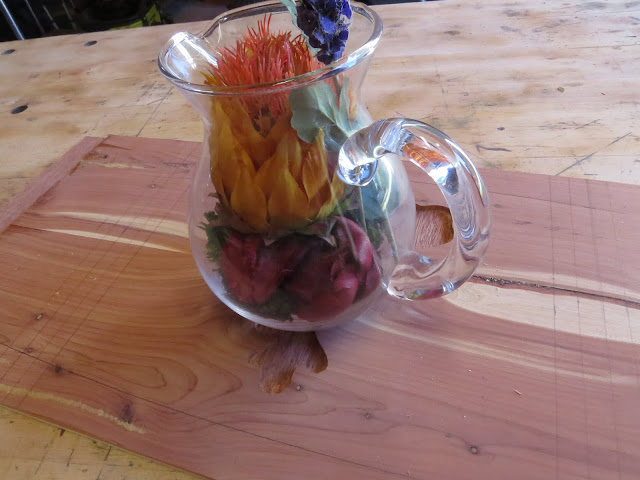 Released from the prison of the glue-up, but before I glued the leaves in place, since that will take another overnight chunk of curing time, it was time to trim the slab down to its final size.

I don't know if she will use it that way, but in my mind's eye this vase sits on the slab, which will be the base of a tray, which sits on her table.

With the vase in place for visualization purposes I messed around with getting just the right size figured out, as you can tell from the various pencil lines to the right and left.

I had already settled on the sides, at the top and bottom, being slightly curved. 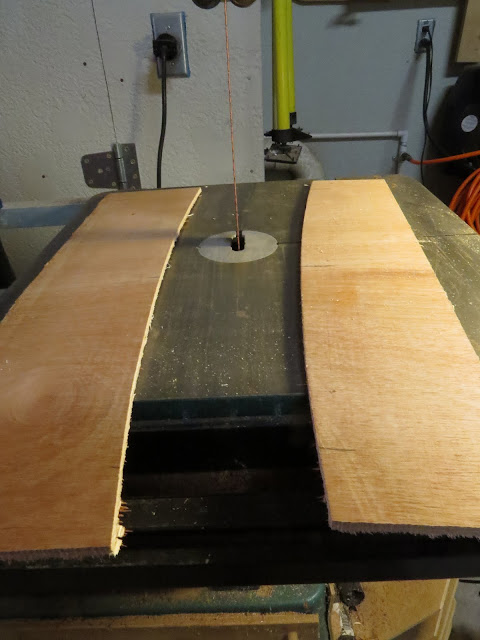 I came up with just the curve I wanted by bending a springy piece of wood in my hands until I liked the curve, then, while holding that curve, getting The Wive to trace it onto a scrap which I then cut at the bandsaw so I could use it as a template. 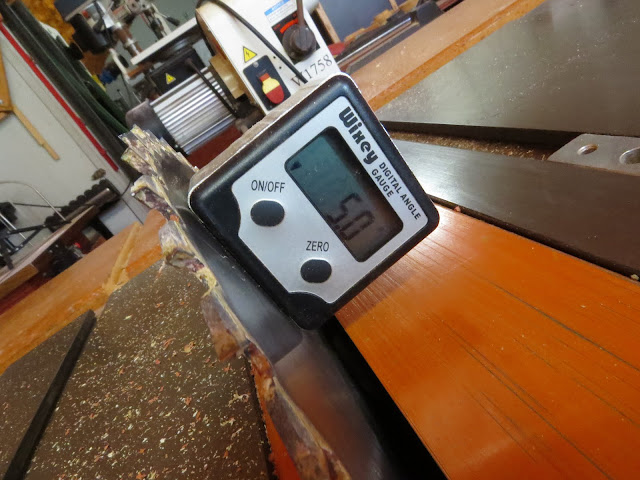 With the trimmed size of the slab determined I set both the tablesaw (for the straight end-cuts) and bandsaw (for the curved side cuts) to the 5 degree angle I had designed for the sides and ends to slant outward. 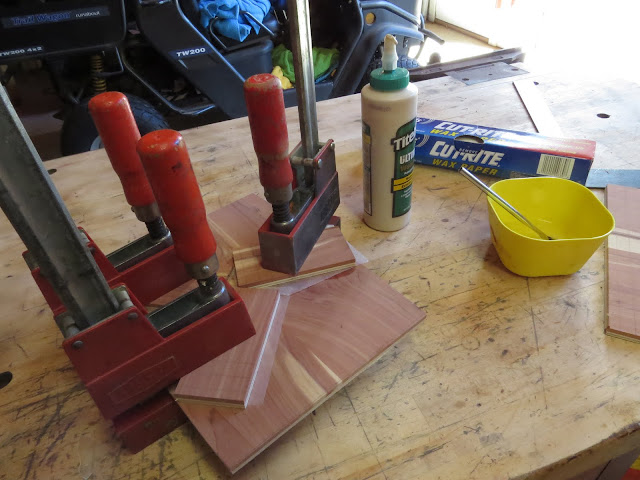 With the slab trimmed to final size it was finally time to glue the three leaves into place and walk away until the next day. 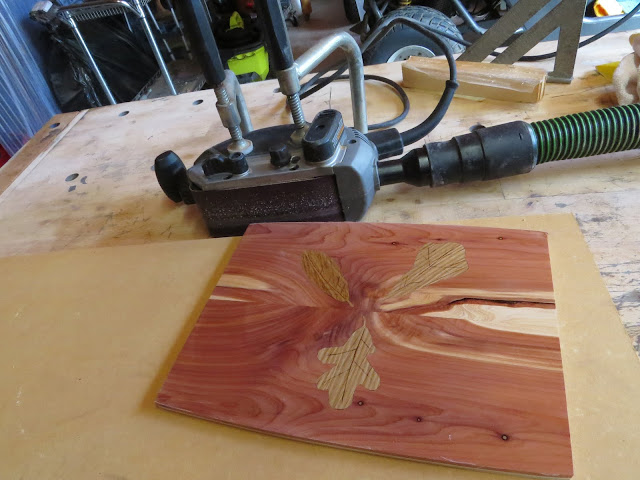 OK, This is where the mice and men stuff comes in, you know, best laid plans and all that.

Even with the necessary clamps and straps in the way I could see that that 5 degree angle was just bad. Bad composition, bad form, bad flow, bad everything!

So, after wasting time agonizing over this monumental fail, here I am clamping a belt sander to the bench so I can very carefully sand the angle off the curved sides and make them vertical again. 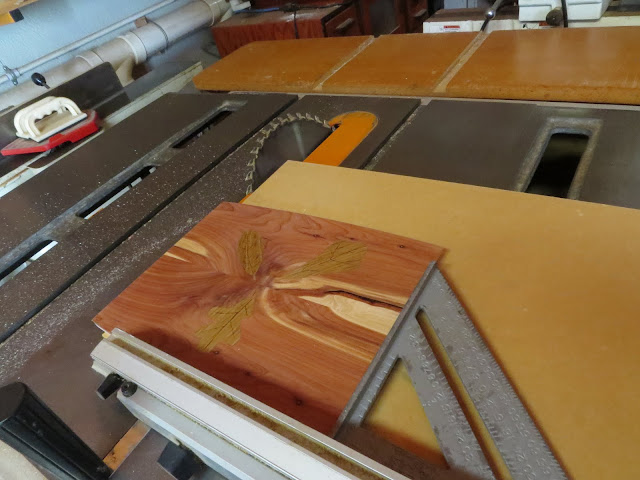 And back at the table saw, carefully bracing and wedging the slab, since I no longer have a straight edge to reference off of, (I originally cut the ends while the sides were still square then curved the sides at the bandsaw.) as I change the 5 degree slant on the ends to 20 degrees. 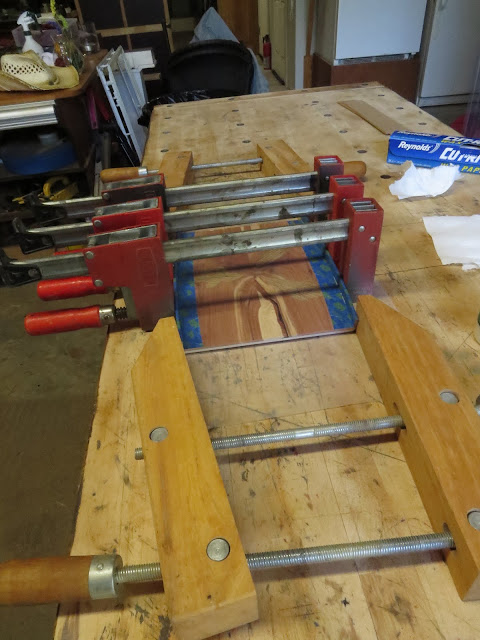 By now, what with all the dry-fitting of the complicated angles, the growing realization that this was just plain ugly, the time wasted in processing this monstrous blunder, and finally repairing the mess, I'd burned up most of a day and, because I had procrastinated so much in getting started on this project in the first place, had to work well into our usual popcorn and TV time that evening to get the now vertical sides glued to the base so they could cure overnight.

It's hard to see in photos, which seem to straighten them out, but by looking at the angle of the jaws of the far clamp you can get an idea of the amount of curve I'm dealing with here. 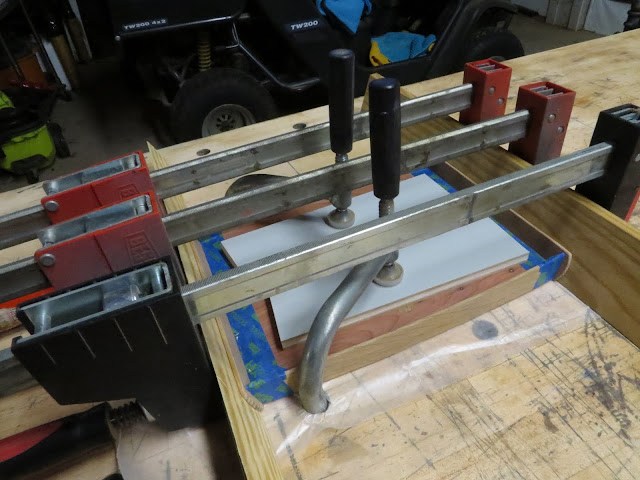 To make up for the late night, the next day was a short one as I glued the ends of the tray into place.

I started by slicing a scrap but straight bit of 2X4 down the middle at a 20 degree angle. By flipping one of the resulting pieces over, these formed clamping blocks to translate my vertical clamp-jaws into the proper angle.

The bench-clamps in the middle are holding the assembly down so it doesn't squeeze up and escape as I apply clamping pressure from the ends. 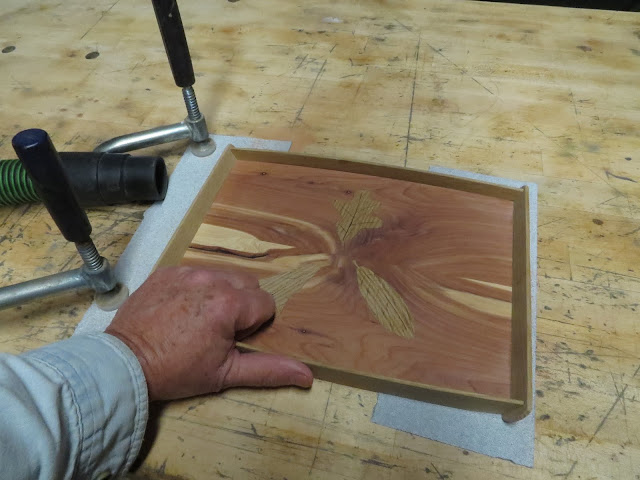 The next day, after the ends had plenty of time to cure, I clamped a half-sheet of sandpaper to the bench, and using the other half as a spacer to keep the tray flat, I sanded the bottom edge of the angled ends flat and square with the bottom of the tray. 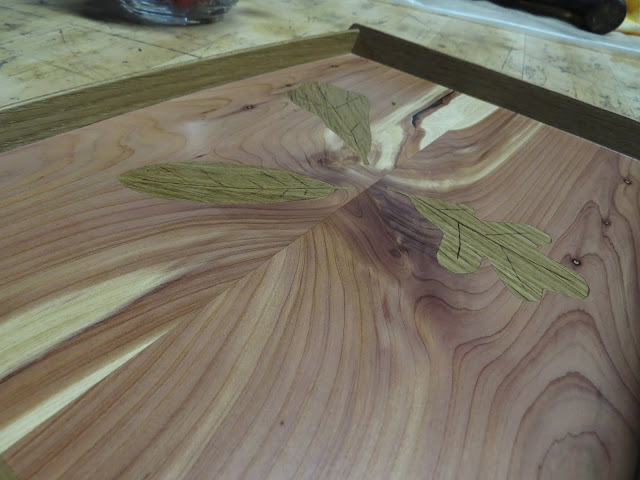 For some reason, probably because I was scrambling to wrap this project up in time, I didn't take any photos of applying the finish or the final glue-up where I covered the bottom of the tray with black felt and then carefully trimmed it to fit, 'polishing' the cut edges with a quick pass of a propane torch. 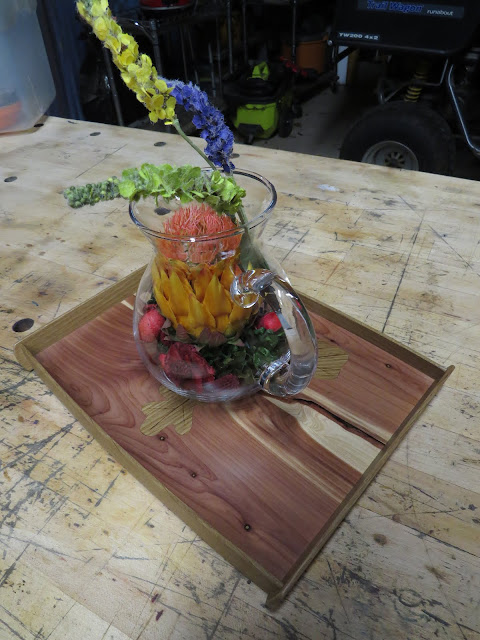 But I did finally hand it, and the vase, over to the USPS, then tracked it nervously through a vicious cold-snap that had even the post office bottled up next to the fire as my package sat, almost within sight of Mom's mailbox, for two days, but it finally made it there with a half-day to spare!

Right about now is when I should vow to never procrastinate again, but that can wait. . .