I knew way back in early - well, let's just say many months ago - that Mom was looking for a new centerpiece for the dining table in her downsized apartment. I also knew that its a rule that mothers are required to gush and grin and fawn over refrigerator artwork from the hands of their children. And, of course, since I'm the good son, (OK Mom, you can stop laughing now. . .) I also knew that she had a birthday coming up. 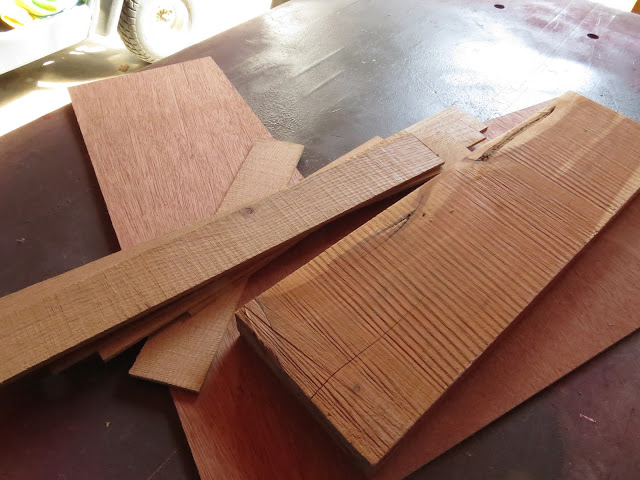 But that, knowing her birthday is coming up, didn't keep me from fiddling and farting around until suddenly The Day was sneaking up and coming at me like a freight train.

I'm not one of those that's necessarily better under pressure, nor am I the type that enjoys and thrives on pressure. No, I'm the guy that pays the month's bills just as soon as the final statement has been posted to get it done and out of the way. (OK, technically I schedule the payments then since they aren't actually paid until 2 days before coming due.) Yet somehow I found myself scrambling around frantically gathering supplies while under an ever tightening deadline. 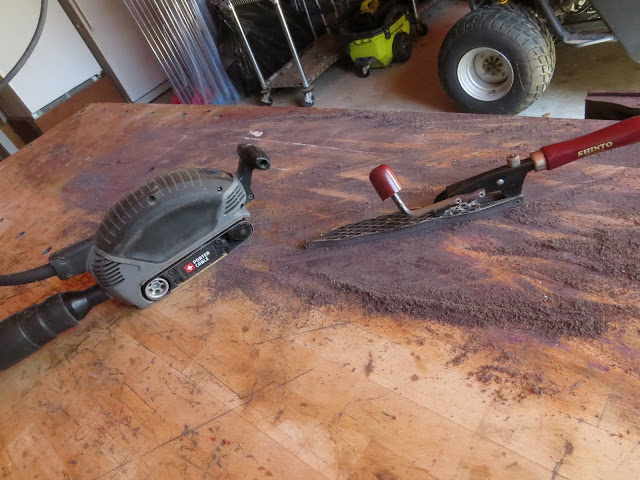 But first I had to clean up the workbench which had suffered greatly under a plethora of small projects and over-spray. (You try painting the wire of Christmas tree lights with a spray-can because seeing green wire against a brown trunk bugs the crap out of The Wife! Oh, and next time she can tape off all 150 bulbs!) 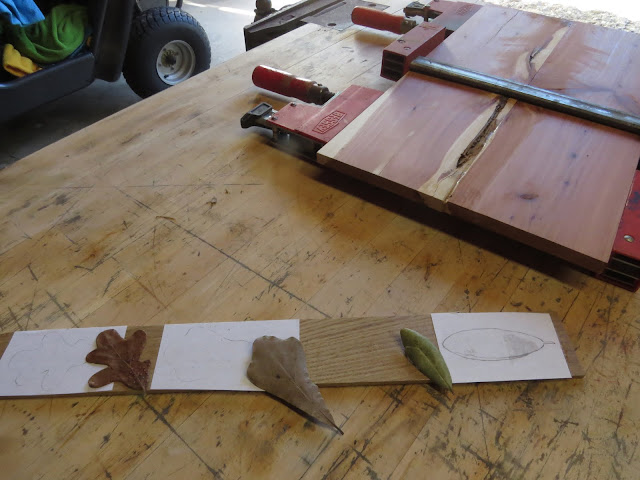 After getting the workbench clean enough to actually work on, I split that chunk of Red Heart Cedar (All the wood was harvested from the property) at the band-saw and edge-glued it back together to create a larger slab.

With that having to cook overnight I spent a few minutes wandering the property looking for just the perfect (from left to right) Post Oak, Water Oak, and Live Oak leaves.

I traced each one onto paper which I then cut out and glued to one of the small slabs of oak. 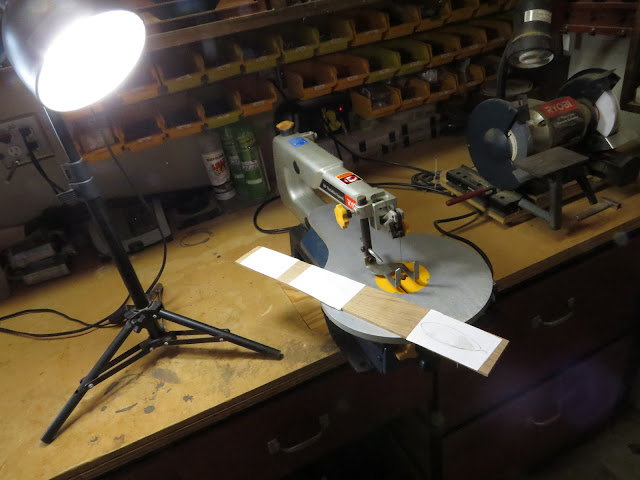 Next it was time to set up the scroll-saw and cut the leaves out.

Prior to this, because I knew I was down to my last blade and scroll-saw blades don't usually last very long for me since I tend to break them, I bought a fresh pack of assorted blades. There were only a few in the pack that I could use, but that assortment was all I could find in a hurry. . .

Except. . . When I lifted the scroll-saw off the wall-peg where it is stored, three more packs of blades that I had completely forgotten about dropped to the floor! (If this sounds suspiciously like the recent battery incident, it is, and clearly I haven't yet learned that lesson.) 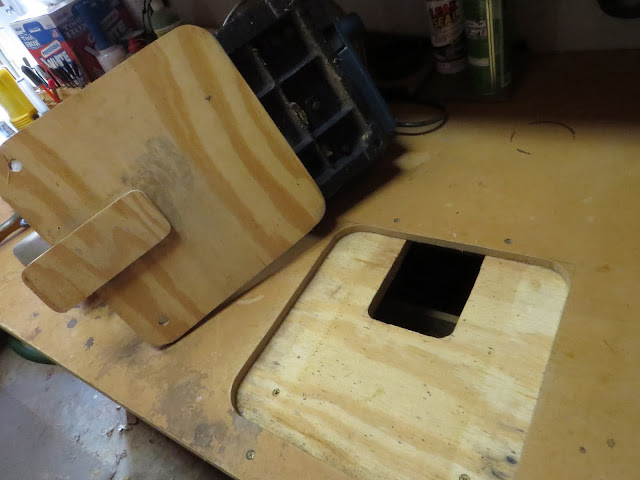 A quick detour here because, well, I've already nearly run myself out of time to get this done so what's the harm in wasting more of that time, right?

When I built my shop I included a cutout in the fixed workbench. I also cut a number of "plugs" that fit into that cutout and have mounted them to the bottom of some of my smaller, bench tools.

If you check back to the photo prior to this one you can just barely see one of these plugs attached to the bottom of the grinder now sitting to the right and how the plug on the bottom of the scroll-saw fits into the bench.

Now all I have to do is drop whatever tool I'm working with at the moment into the cutout in the bench and it is firmly stabilized. As an added bonus, I drill holes in the plug which makes it a snap to hang unused tools up out of the way. 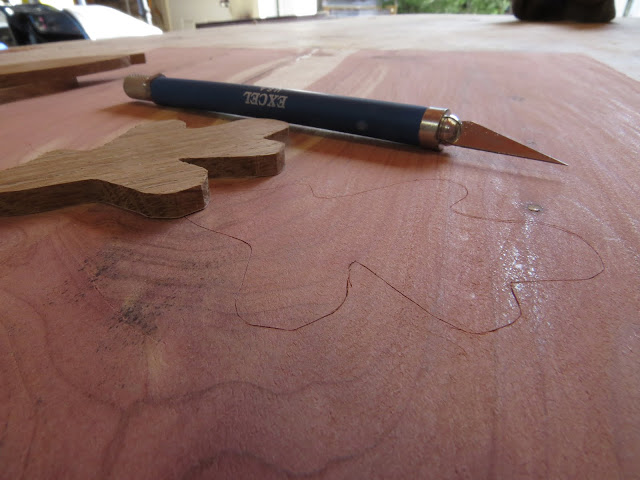 Once the leaves are cut out at the scroll-saw, and the glued up Cedar slab is cleaned up and planed down, I messed around with arraigning the leaves on the slab until I was reasonably happy, then carefully traced the outline of each leaf onto the Cedar with a fresh #11 blade. (Pencil lines, even from the finest mechanical pencil, are too thick and imprecise for this step. The old cabinet makers struck most of their lines with blades and finding these marks on the dove-tails of drawers and insides of cabinets is one way of authenticating a piece.) 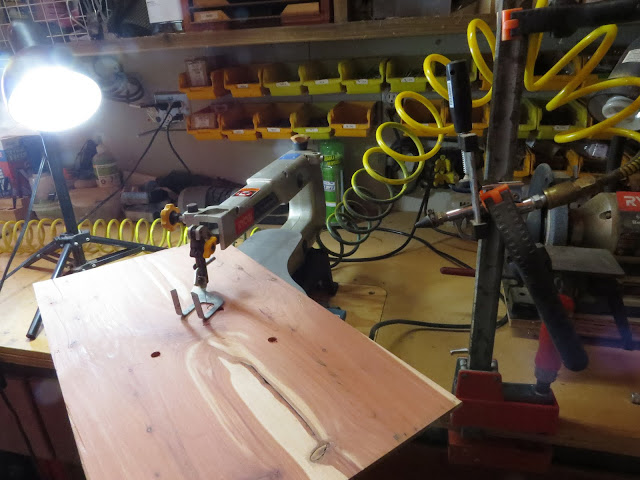 Then I drilled a hole inside each leaf-tracing and headed back to the scroll-saw where I snaked the blade up through each hole in turn so I could cut the shape away.

My particular saw used to have a little puffer thingy on it that would use the up and down motion of the arm to blow sawdust away from the blade so I could see what the heck I was doing. It worked fine but unfortunately didn't work long, or at least not long enough. A long time ago now the little bellows that made the thingy work split wide open and it quit puffing.

Now I use a nightmarish concoction of air-hose and various clamps to blow a gentle but cold (This was January in my unheated shop) stream of air at the juncture of wood and blade. 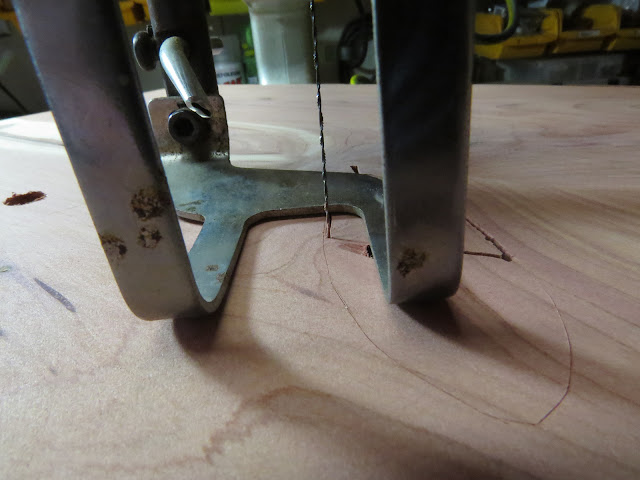 I'm using a spiral blade here, which is great because it cuts in any direction which means I don't have to keep spinning and turning that largish slab so a traditional blade can follow the line, but the spiral blade does take some getting used to and before I did any real cuts I used up some time I didn't really have in making some practice cuts on a scrap to get my 'feel' back.

Back on the real cuts, the trick is to cut just inside the line. No pressure here, but if you wander over to the other side of the line the piece is ruined. Like I said, no pressure but - well - tick tock. 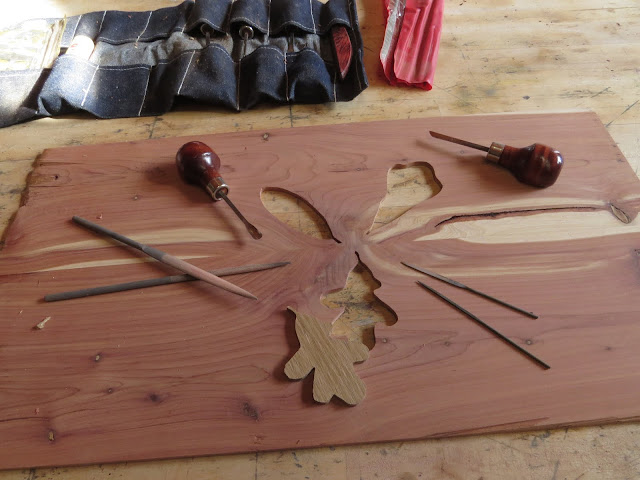 The next step is to use a variety of carving knives and files to fine-tune the holes in the slab to perfectly fit the leaves so they will drop right in.

Thought the finished product might look like it, technically this is process I'm using is not inlay. If that were the case a leaf-shaped depression would be carved into a thick slab, instead this technique here is officially marquetry, but who really cares?  After all, you can call me anything you want and it doesn't really make a difference. (OK, I know what you're thinking, and I'll concede that if you call me something nasty, and it's true, it might sting a little.) 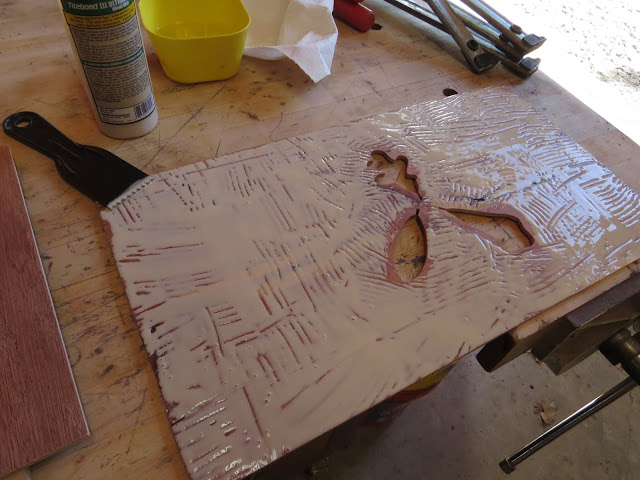 With the leaf-holes all cleaned up and ready it was time to glue the slab onto a substrate. In this case a scrap of luan (Just barely poking in over on the left.) left over from when I built The Van's latest cabinet doors. 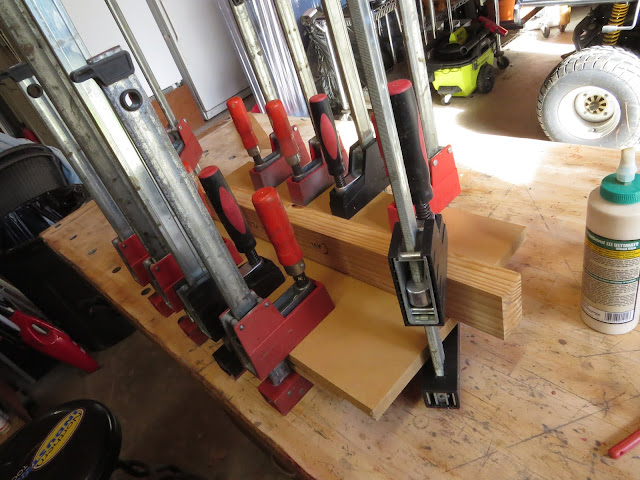 Wanting to make sure I got a good, solid glue-up I clamped the sandwich between some scraps of MDF.

MDF, while send-me-to-the-chiropractor heavy, and choke-my-lungs dusty when cut or sanded, is relatively soft which means it not only won't mar the material under it but it will also conform to minor defects and variations which makes it perfect when clamping glue-ups.

I also threw in a caul to put some pressure there in the middle where the clamps around the edges don't reach. A caul is a heavy piece of wood with a slightly convex face that puts pressure out in the middle of the field when clamped at both ends.

Ten might seem like an awful lot of clamps for this small glue-up,but none of them are gorilla'ed down since squeezing out the glue kind of defeats the purpose. I just used lots of them to ensure a fairly even clamping pressure across the entire surface and cranked each one down to a light-medium.

Oh - you get the wood reference in the title but what about the mice and men?