Closing Out Some Chapters, But the Saga of Elmer Continues


Yep. I said the saga continues!

Just about one year ago the family circled the wagons to get Elmer, my 90 year old father-in-law, transported from his winter fishing-camp (Travel trailer parked in a campground on the Texas golf coast) back up to his daughter Dale's house in Missouri. It was quite the logistical operation but we all, even Elmer, survived, though at the time he was pretty convinced he was dying, (For real this time! Honest!) and frankly he looked it.

But that was hardly the first time he's slid down that chute greased with a lifetime of smoking, chicken-fried steaks, biscuits and gravy, and physical injuries brought on by general clumsiness. So none of us were too surprised when he recovered, once again. (Well - OK, maybe some of us were a bit surprised. I mean even his own doctor can't figure out how come the man is still alive! A good five years ago, prior to one of the road-trips to get him from Missouri to Texas for the winter fishing season, his daughter pulled Elmer's doctor aside and asked what they should do if Elmer croaked in the car on the way down. "Oh no!" he said, "You don't want to go through all the paperwork and hassles if he dies out of state, so just prop him up in the back seat with a blanket, head straight back here, and call me when you get close.")

But once again, from the very jam of death's door, Elmer rallied and we were, depending on which of us you ask, mildly to moderately surprised.

Though we certainly have been shocked by some of the changes that he's implemented, all on his own, in the months since!


But the latest curve-ball thrown by that old man (OK, perhaps feebly dribbled across the floor since his throwing arm - well - isn't anymore.) was him calling us the other day and asking if it would be alright to give the travel-trailer away, as is, where is! 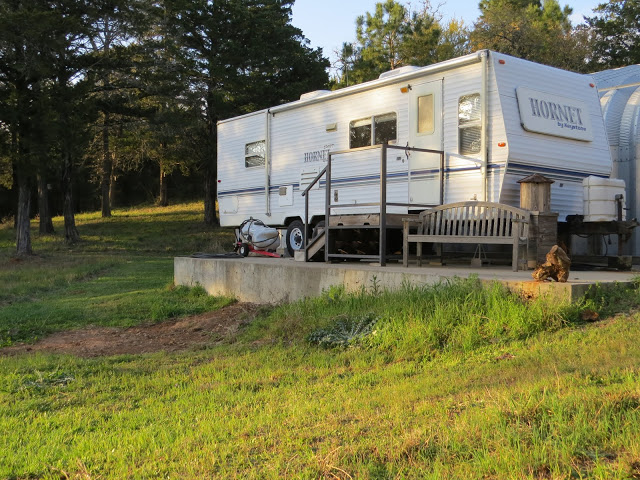 I nearly fell over!

He loves that travel-trailer. In his entire life, which, you'll have to agree, is pretty damn long, that Keystone Hornet is the only place he's ever lived on his own. The only place that was all his, no sharezees, just his to clean, or trash, all by himself. So our plan, even though there was clearly no way he could ever move back into it again, was to just leave it there behind Ronny's barn until he was gone so Elmer could at least continue to dream of life in that trailer.

We weren't looking forward to the hassle of disposing of it later, but for now it brightened Elmer's day once in a while by just being there, or so we thought.

But surprised or not, before my sweaty palm-print had dried on the phone, I was in the safe, pulling out the title, signing it, (Fortunately, when we bought the trailer for Elmer back in 2007 we put it in our names, not his, figuring on a future situation just like this.) and stuffing it in an envelope to send to the new owner like right now! (Though The Wife did talk me out of making a special trip to town just for that.)

Yippee!  There's 27 feet of monkey off our backs! 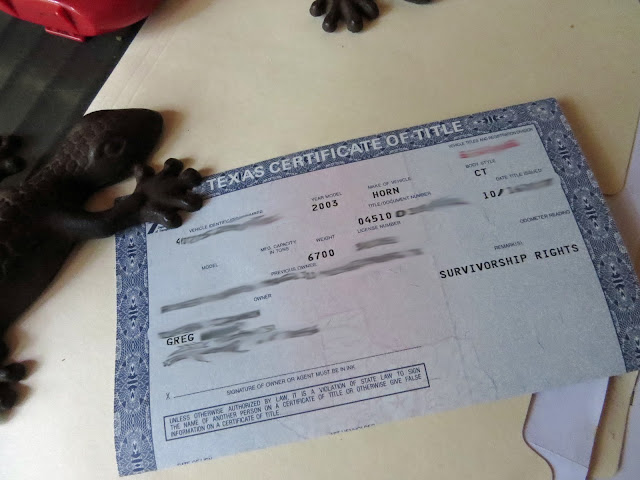 In the mean-time Elmer continues to roll, stutter, glitch, and plod on even though we have been expecting "the phone call" for quite some time now.

(Unfortunately, when "the phone call" did come back in January it was because Dale's son had been murdered. He was trying to do the right thing by protecting a woman in a domestic-violence situation, but that only tempers the shock and pain only so much.)