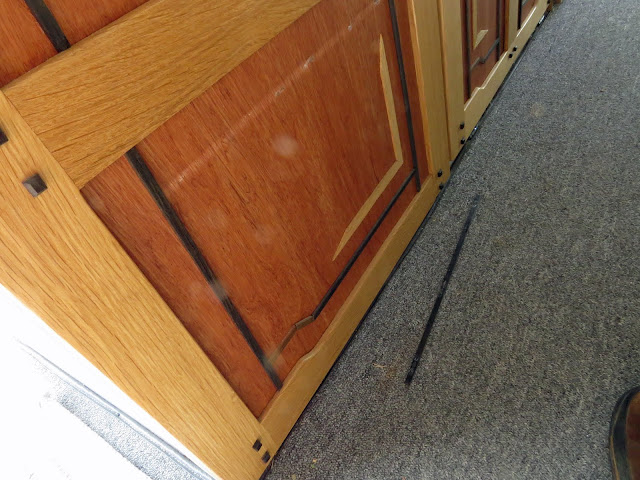 You see all those fuzzy spots in this image I took the other day while watering the batteries in The Van?

If you think they look like the result of a really dirty lens, you're right. Only problem is the dirt isn't on the outside where I can get at it, but rather on the inside where all I can do is look helplessly into the black-hole of the 50X zoom lens at the bits of dust and debris that have collected in there.

I tried smacking the side of the lens rather briskly, probably more briskly than is good for it, in an attempt to shift the crap over to the edge where it wouldn't be so obvious, but no luck. That junk, collected over years of less than ideal conditions, was stuck tight. 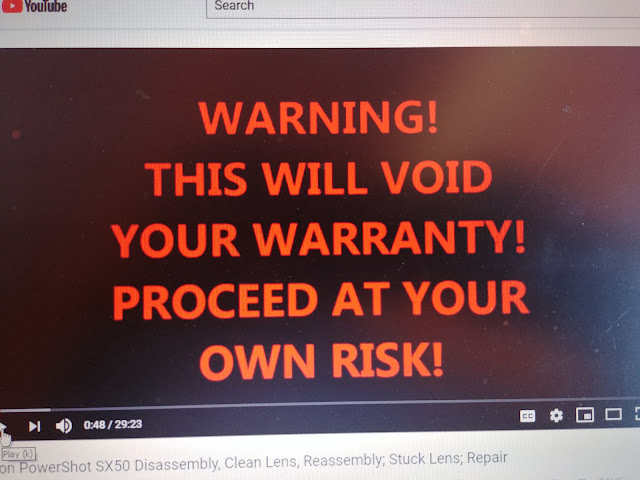 So I did what any reasonable, (desperate) modern man would do. I went hunting on YouTube for a fix, and I found one! Though it starts off a little shaky, but then again my camera has been out of warranty for - well, I don't know how many years, so I continued on. 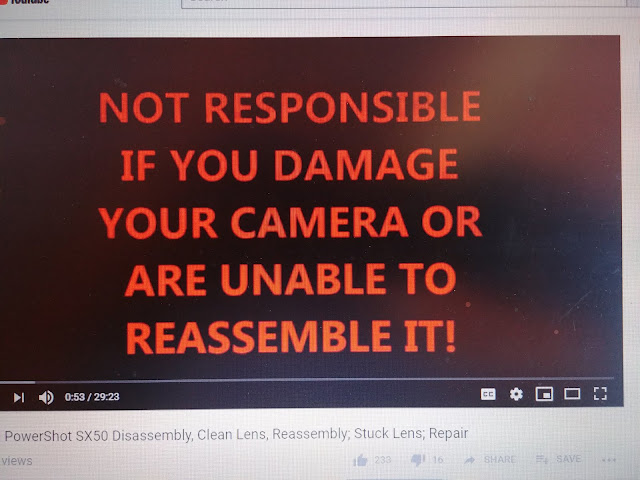 But frankly things weren't getting any better. . .

Except that the camera was pretty much useless in the state it was in so how much worse could it get?!

I don't usually watch videos because of our limited monthly allotment of satellite internet bandwidth but I made an exception this time. If I run out of bytes I (and The Wife) will just have to suffer pre-2000 connection speeds until the end of our billing period.

First I watched the video straight through from start to finish. 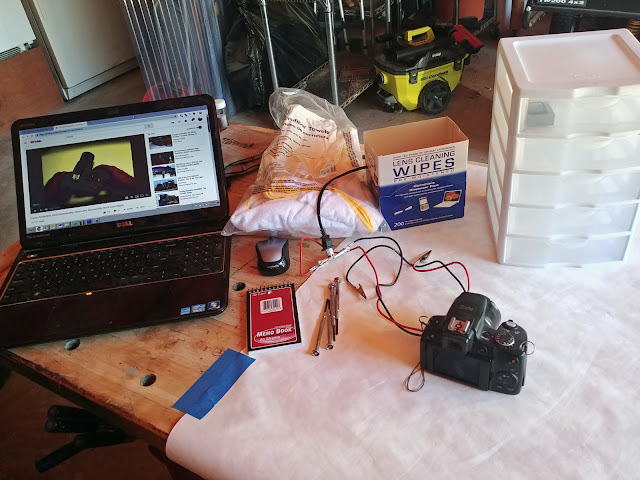 Then I taped a piece of leftover Tyvec to the workbench to give me a clean, bright surface to work on and gathered all the crap I was going to need for this operation, including a handful of clean, never been out of the bag, micro fiber towels.

The notebook is for labeling everything as I went, the storage drawers are for keeping the larger bits sorted as I proceed, and a couple of smaller, divided storage boxes, out of frame to the right, are for screws (Oh so many screws!) and assorted teeny bits.

The black and red jumper wires each have one end clipped to separate legs of a lamp-plug and will be used to discharge the flash capacitor (through the lightbulb in the lamp) when I get to that point. Having worked with electricity all my career I know first hand that getting zapped hurts! Getting zapped by a big cap hurts even worse! 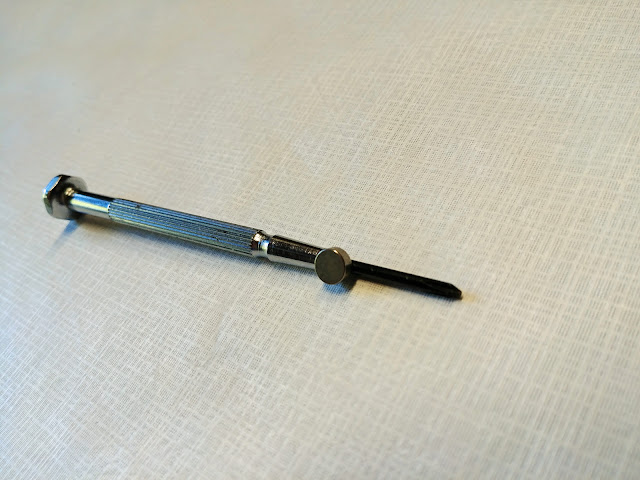 I also, using a trick I often resort to, turned my little Philips screwdriver, the one that will be used exclusively for disassembly, into a magnetic tip that hangs onto the teeny-tiny screws. I've got stacks of assorted sizes of rare-earth magnets and I grabbed one of the smaller ones and just let it hang there on the side of the screwdriver. 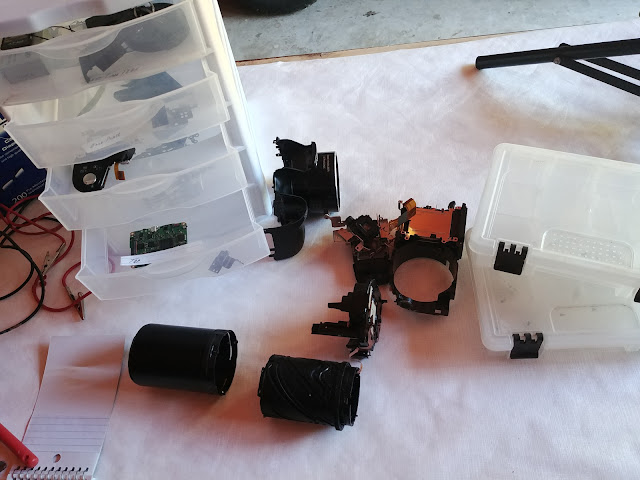 The video is 30 minutes long, the first 18 or so being disassembly, the rest re-assembly. It took me one hell of a lot longer than that, starting and stopping the video every step of the way, sometimes backing up and going over it again, to eventually get my camera broken down to it's multitude of component parts. (The drawers are loaded from top to bottom in disassembly order. The little compartments in the tiny storage boxes are loaded with screws from left to right, front to back, one assembly per, also in disassembly order.)

None of these lenses went easily into the night. I had a struggle getting all the dust and debris off of each one, and since I don't exactly have a clean-room to work in, keeping it off was no picnic either. 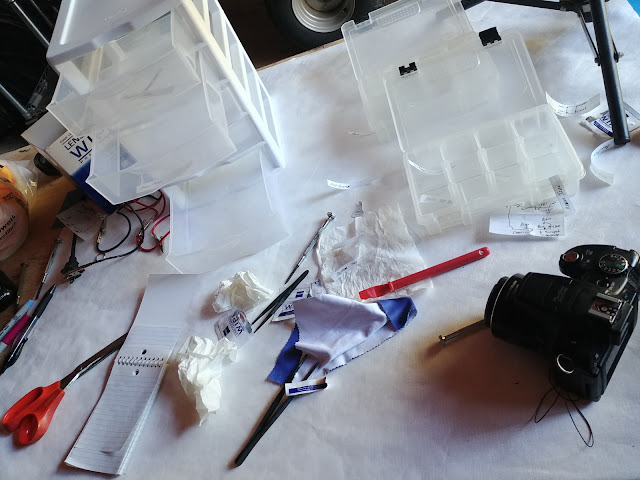 Now came the moment of truth! Or rather the hour and half of truth, as I worked my way through the second half of the video and put my camera all back together again.

This was where I would find out if I was buying a new camera next week, or if I could leave the emergency fund alone for just a little while longer. 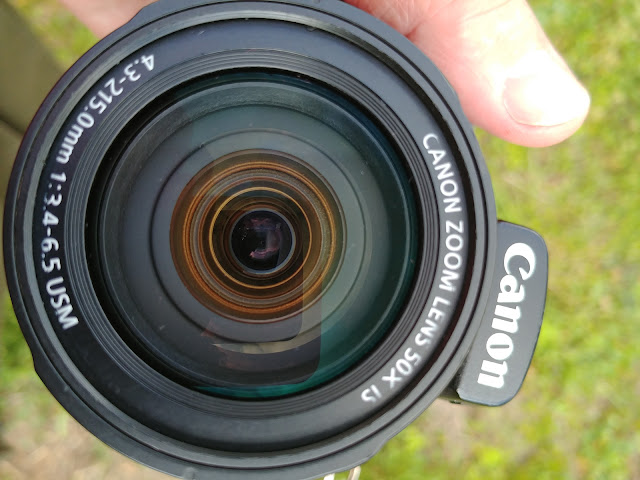 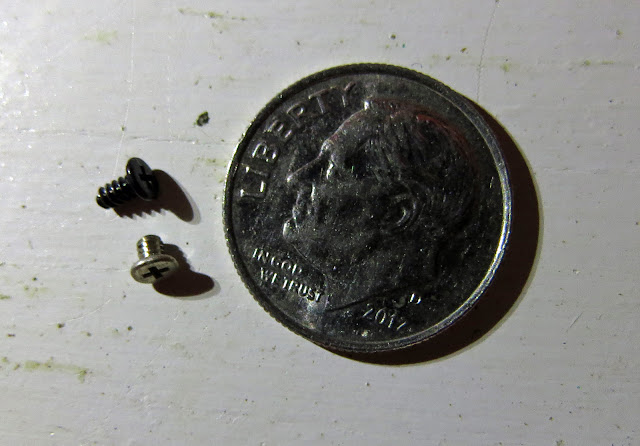 Once I finished the reassembly with no parts and only 2 screw left over (There are a LOT of screws inside this tiny camera! I think some of the parts and assemblies in there were put in place just for fun, to hell with function! and was it really necessary to use 8 screws to secure a 1.5 inch by 1.75 inch metal plate in place??) I took a long break before I worked up the nerve to put the battery back in and turn it on.

My initial reaction was "CRAP!", or something to that effect. . .

But it was just a setup screen that I'm not used to looking at. Once I put in the time, date, and timezone I was looking at the normal screen, which was good. Really good.

Even better was the camera taking sharp, clear photos at various degrees of zoom.

You would assume, well at least I did, that with a zoom range of 24 to 1200 mm the lens assembly would be pretty damn delicate and finicky, but that's not the case. After being taken apart and reassembled by a rank amateur the image is still crisp at all zoom levels and over the years I have thrown this camera down on the hard at least three times, (Not on purpose but shit happens!) once hard enough to visibly distort the outer case around the lens assembly, but those sudden stops seemed to have no effect on the camera.

So, after a full afternoon hunched over with my face a few inches from the work (I see close up much better without my glasses but am significantly nearsighted so have to be really up close and personal.)  did I do any good?

The debris inside the lens is, except for one small scratch off to the side of the larger lens, gone and when I point the camera at the sun I no longer have constellations of fuzzy spots looking at me.

On the other hand, now that the inside crap is gone, I'm quite aware of a tiny nick in the outside surface of the outer lens. It looks like a bit of white dust but no amount of cleaning will budge it. But then considering what that camera has been through, one nick near the outer edge of the lens isn't bad. Not bad enough for me to consider replacing the camera at this time anyway.
Posted by greg at 9:30 AM