Adventures With a Nightjar


You're far more likely to hear a Nightjar than you are to see one, and considering that they are nocturnal that's not so surprising.

Where I grew up in Michigan we had the Whippoorwill variety. With it's distinct call, usually heard at or just after dusk or at or just before dawn, we knew they were around, but I can't remember ever actually seeing one.

Here in Central Texas, at least on our property, we have the Chuck-Wills-Widow variety. Not only is the call different, consisting of three separate "words" as opposed the the Whippoorwill's slurred two-word sound, and some say it sounds like the bird is saying "chuck" (a short sharp cluck sound) "wills" (a slightly less accented bridge between the chuck and the widow) "widow" (an exuberant, loud, and sharply punched, two syllable finish) but at 12" long this bird is also about 25% larger than the Eastern Whippoorwill.

I've known since we first moved out here that we had this particular type of nightjar on the property, it's kinda hard not to since these things are also much louder than the Eastern Whippoorwill, but until recently I had never actually seen one.

There's a reason for this.


They look like bark, or leaf-litter, and when in trees, instead of perching across branches and standing up they perch along them and hunker down for the day, often with their heads right down on the branch as well. (This one must have been startled by, or at least 'interested' in, the photographer.)

But this spring-summer I have had the opportunity to see one almost every day. That's because she has nested right near where three of my trails intersect at the back of the property.


And I use the term "nested" loosely since they don't build nests but just lay their one or two eggs on a bit of ground that looks good. 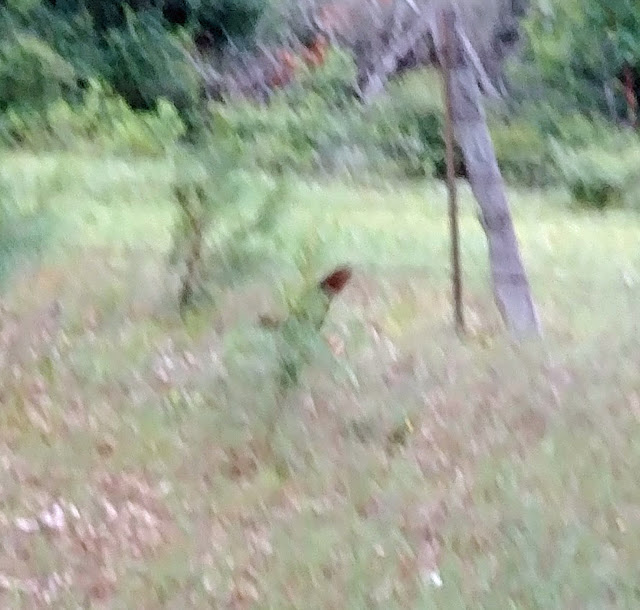 But even then she's not easy to get a decent look at, let alone a usable photo of. Here I have the camera (cellphone) in burst mode and in this frame you can see (Well maybe you had to be there. . .) her swooping in behind a seedling long-leaf pine near the back fence as she does her "broken wing" routine. 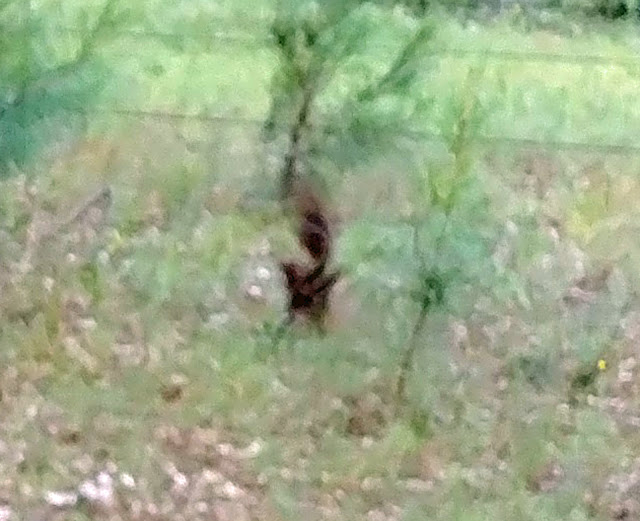 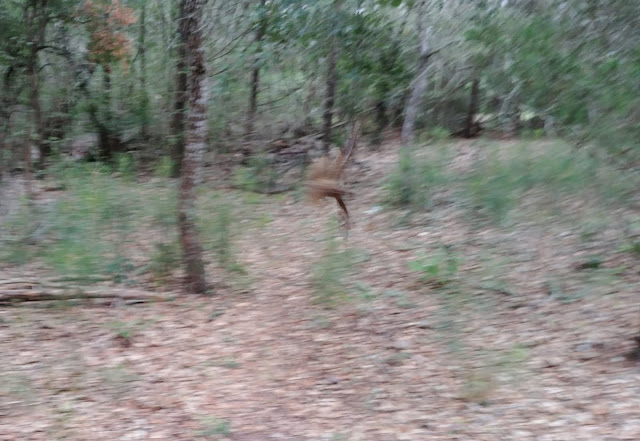 Another time she played chicken with me, swooping straight at me until swerving off at the last moment. It happened so fast I wasn't sure I caught any images until I got my phone back to the computer later.

Every day I'm back there (which is actually every 3rd or 4th day because I have temporarily bush-whacked new trails back there that loop around where she's at so I don't disturb her too much and I only go check on her a couple times a week.) I manage to get brief glimpses of her, but she's really good at keeping something, rock, leaves, branches, between me and her so I can't really get a good look. 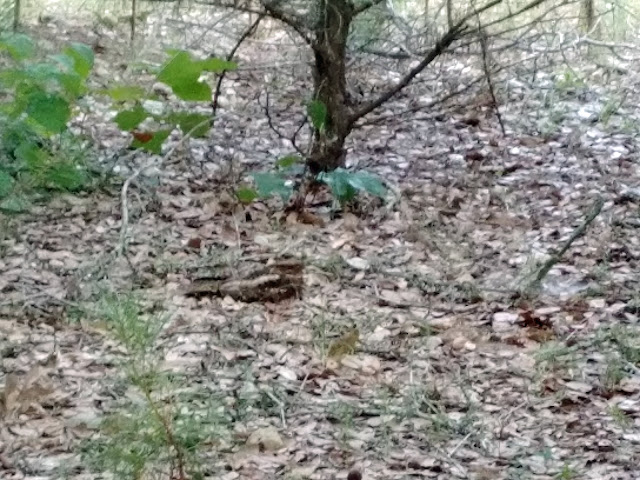 Despite her proximity to the trail it took me a couple weeks to figure out the general area where she was actually coming from, then a few more days of stalking (Which really just consisted of me moving carefully up one of the three trails as I approached the area) before I managed to capture this shot.

See that bit of bark laying on the ground just left of center? That's her. 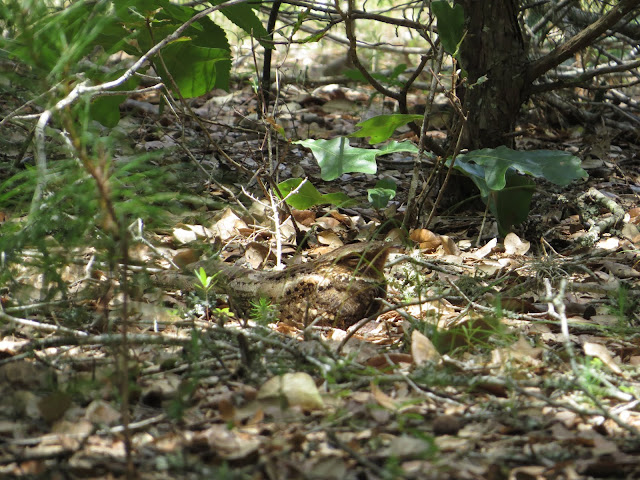 I came back one day with my real camera and, at nearly full zoom, managed to get a slightly better photo

She looks all serene and relaxed here in the dappled sun, 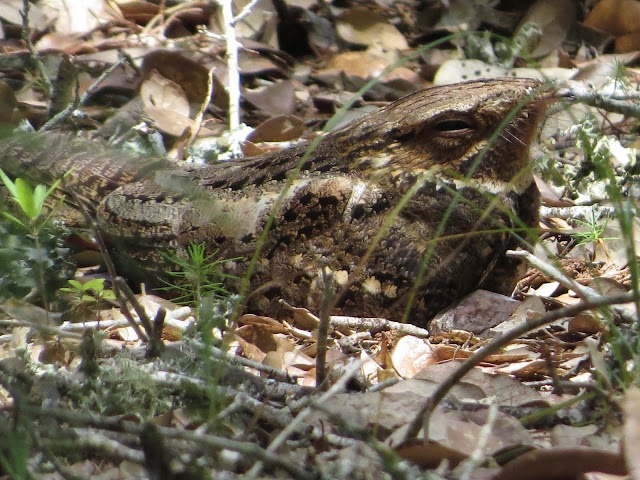 but zoom in closer and you can see that she's keeping an eye, tucked up under that heavy brow, on me. (I wonder if that heavy brow helps when they run into things in the dark?)

The next instant she was in the air. 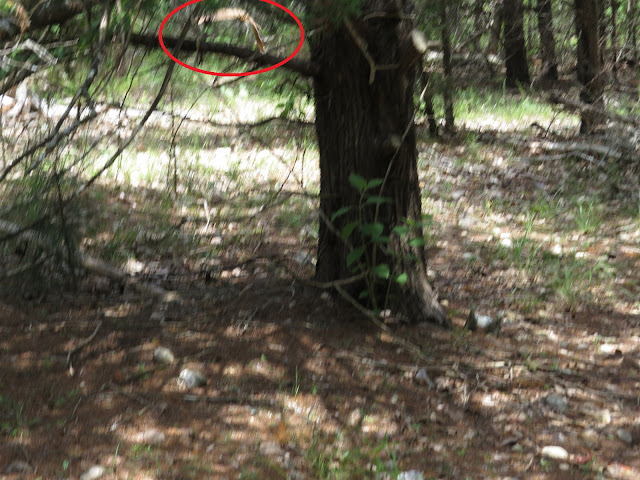 But burst mode on my real camera 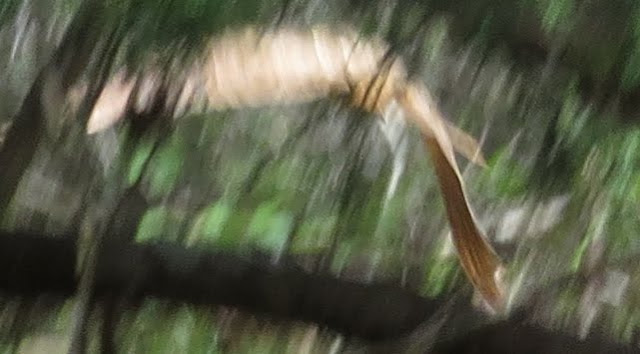 didn't do much better at capturing her. 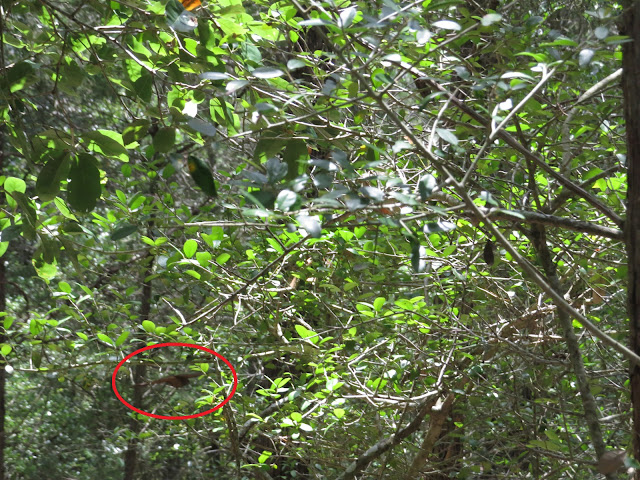 She was too fast for using the viewfinder or screen 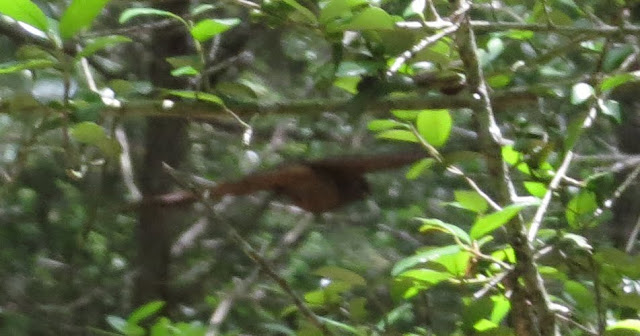 so it was just point and track in the general direction while holding the button down, and these were the only two images of some 50 that captured her at all. 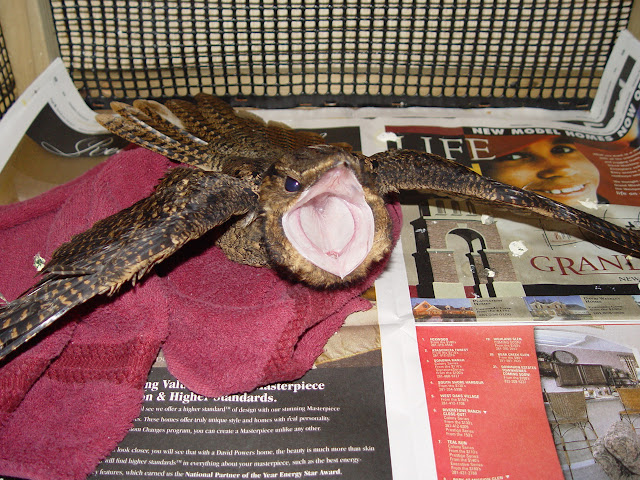 As this photo from a bird-rescue place shows, it's no wonder these things are so loud!

They have a small beak, but a really big mouth. This helps with snatching up insects out of the air in the dark.

I had hoped to eventually catch a glimpse of the hatchlings, but it was not to be. A few days ago she was sitting on her two eggs as usual, today she was gone and there is no sign of the eggs, nor any bits of shell, at all.

Early Ornithologists postulated that sometimes Nightjars will pick their eggs up (In their beaks as they have very short legs and tiny feet.) and move them, but the general consensus among today's Ornithologists is that that is highly unlikely.

Given the various snakes, raccoons, possums, bob-cats, coyote, fox, and feral hogs we have running around, a far more likely explanation is that her eggs were found and eaten, including the calcium-rich shells.

Sad, but it's all part of the natural process.