OK, I have managed to horse The Van over Middlemarch Pass, (Or was it more like The Van dragged me over?) but I can't stand around patting myself on the back for too long because I have places to be today.

First stop is Fry's in Sierra Vista for food and fuel. Yep the place was crowded, in fact I think a significant percentage of Sierra Vista's 40,000 inhabitants were there on this Sunday, but I survived - barely - butchadowhachagotado.

Next stop is the home of a fellow blogger.

He was busy yesterday hauling supplies up the steep Carr Canyon road to keep the participants of a memorial bicycle ride watered and fueled and I really expected him to be just as busy today as the ride continues, but I texted him when I got to town and he said come on over, so, like any self-respecting on-line stalker, I did.

Not to give away too many details, but he has a pretty sweet setup. Nice place on a quiet street within minutes of all the amenities that a town of 40 or 50 thousand has to offer. Mountain views to the east, south and west that, because of Arizona laws protecting natural waterways, dry or not, will never be obstructed by houses or other development.

The Wife and I might have more space out here on the property than he does, but he has all the amenities available that we don't. In addition to a well equipped regional hospital minutes away, he has great cell service, inexpensive high-speed internet and cable, streaming, trash pickup, mail delivery, all things we had to give up. 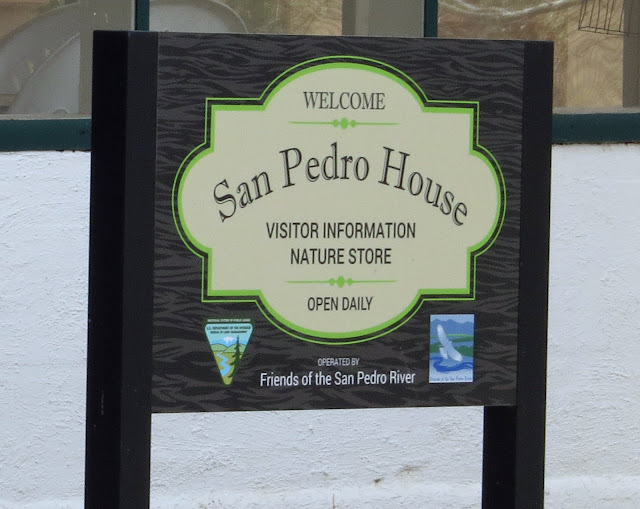 I was expecting a short visit with him before I moved on, but despite his pretty active day yesterday he said he was up for some outdoor activity today.

His town, so I let him choose. And Sierra Vista has a lot to chose from. It's an outdoors-oriented kinda town.

But I have to say, I was pretty damn nervous, standing there in his kitchen waiting to hear what he decided we were going to do. You see, this guy is a hard-core bicyclist that has more bikes in his spare room than I have pairs of pants! (And these are not cheap bikes like my $120 Big Box Beater Bike!)

I just knew if he chose a bike ride (Sierra Vista is pleasantly riddled with bike trails and there are even more rides to be found in the surrounding area which includes a lot of BLM and Forest Service land.) me and the Quad-B were going to be lagging back there in his dust and thoroughly disgraced.

Fortunately for me he chose a hike in the San Pedro Riparian National Conservation Area using the San Pedro House as our starting point.

San Pedro house is only a few minutes drive from Sierra Vista, but the San Pedro Riparian Nca starts at the Mexican border and runs some 40 miles north, averaging nearly 2 miles across, with the San Pedro River running up the middle the whole way.

San Pedro House is one of about 8 different trailheads scattered along the length of the Conservation Area, including one to the ruins of a Spanish presidio and another to a Clovis archaeological site.

There's a lot of exploring to be done along this strip of protected land. 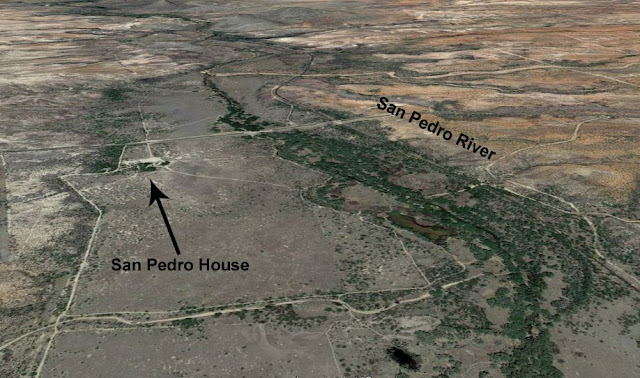 And when I say the river runs up the Conservation Area, in terms of map-speak I mean it literally. You see, the San Pedro is one of the few entirely north-bound rivers in the country.

This river starts across the border in Mexico at Laguna los Patos (Duck Lake) as Rio San Pedro, changes to the Americanized San Pedro River at the border, continues up the full length of the San Pedro Valley, ducks under I-10, continues running north as it slips along the east side of the Santa Catalina Mountains, and finally flows into the Gila River near Winkleman. (The Gila then flows west to eventually empty into the Colorado River, which is flowing south at that point, right back into Mexico.) 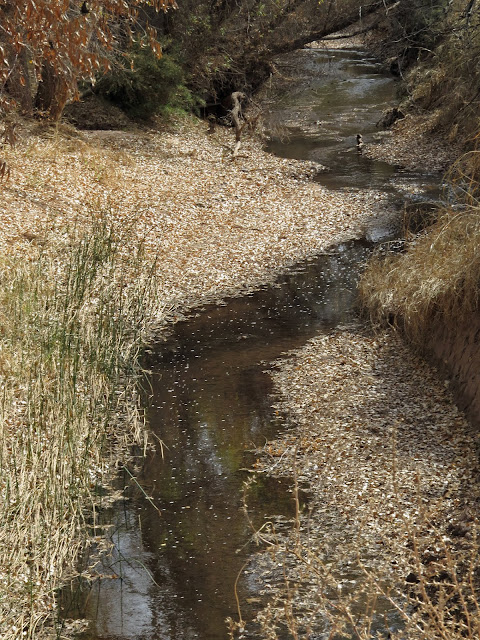 And when I say the San Pedro flows I don't mean that euphemistically. This is one of a handful of Arizona rivers that actually has water in it year round. 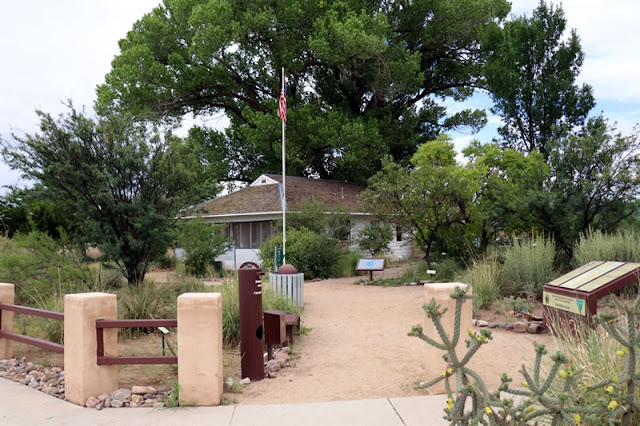 We started our particular hike at what used to be a modest ranch-house which has now been restored as the San Pedro House and is run as a bookstore and gift shop 7 days a week by volunteers. But be aware, the gates don't open until 0930 and close again at 1630, so early and late hikers are out of luck. 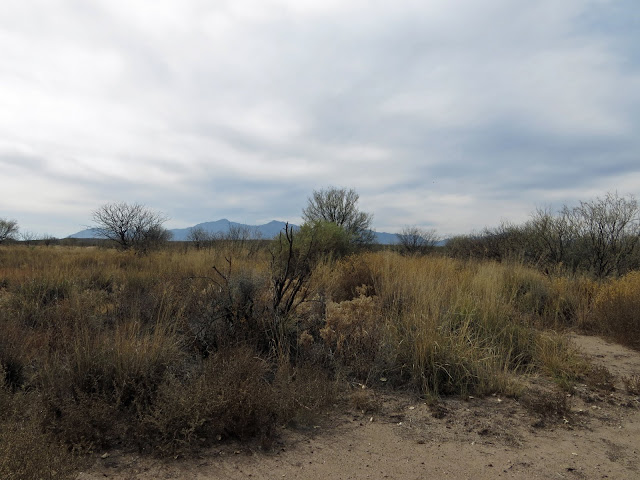 In its day this ranch, sitting out here on the fertile floor of the high-desert valley 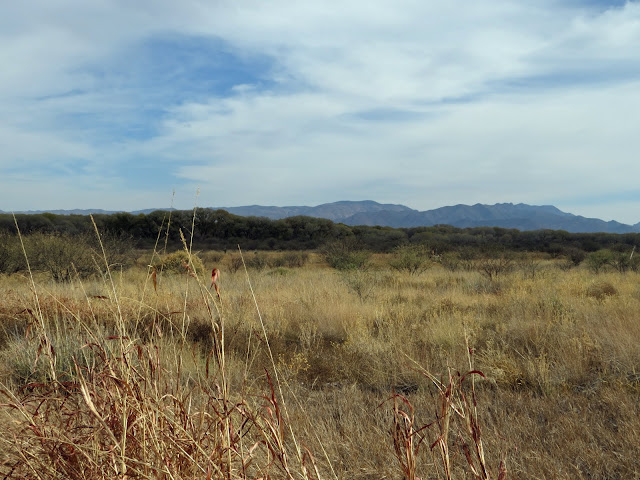 with a reliable source of water near by and surrounded by mountains, grew alfalfa and other livestock feeds. 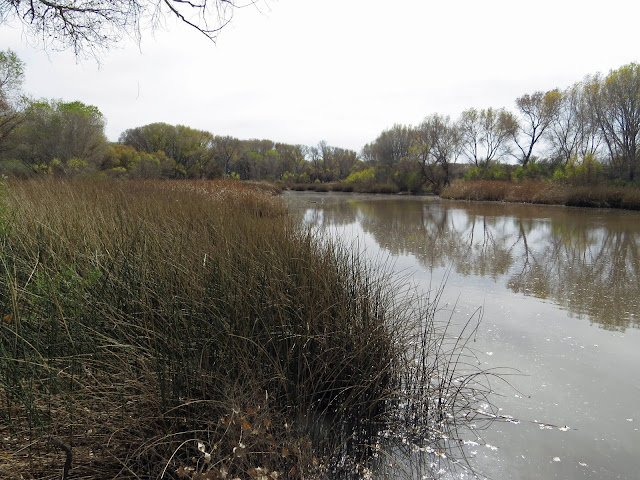 Today that same watered fertility makes it one of the most 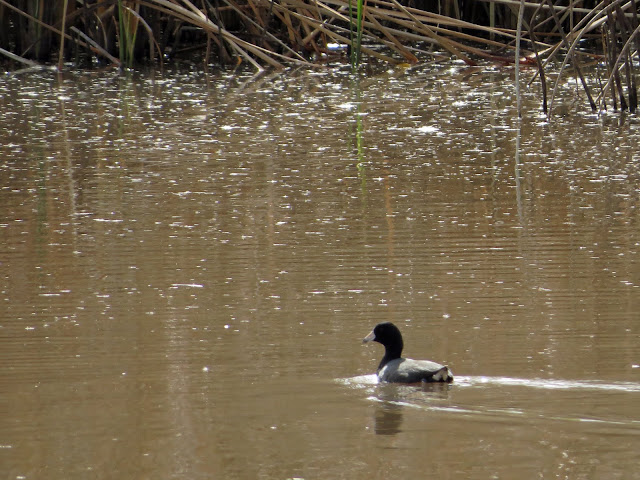 important fly-ways in the southwest. 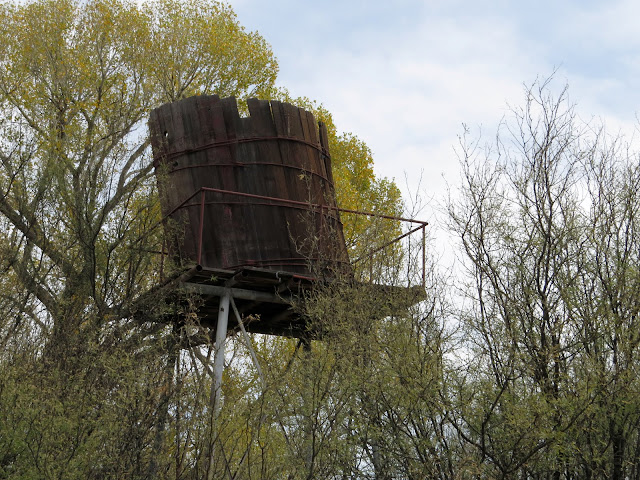 The era of the ranch is obviously over, but that has made way for an era of conservation and protection of the native species of the area, and that's a nice thing to see. 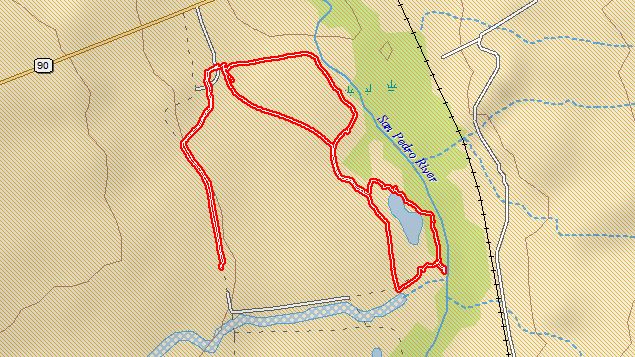 We didn't hike so much as just wander around.

In the 3.5 miles we covered in our lazy fashion the elevation varied a whole whopping 30 feet. I think this was the flattest hike I was on so far this entire trip, and the change was nice.

Now that my host has given me a taste of the conservation area I have put it on my list to explore more of it next time I'm here.