Middlemarch Road Over the Pass - Or Not?


To avoid confusion, and any possible shaming or official visits by the Corona police, I'm adding this clarifying face-wash note because there is actually a little talk of, and even actual, socializing in the next few posts.

For years my normal mode of living has been social distancing, I just didn't know that's what it was called. (Until the past couple months "weird" was a commonly used descriptor, which is maybe slightly kinder than 'his cornbread isn't cooked in the middle', which has also been overheard.) So while many of my current posts, up until the next couple after this that is, may look like I'm carefully following today's social distancing rules, that wasn't the case. In reality, for security reasons I don't post real-time and the hikes and events described actually took place back in November. You know, back before the stores ran out of toilet paper for no damn reason other than our own stupidity. . .

And even if there was a good reason behind the run on ass-wipes, every responsible household in the country should have already had enough supplies of all kinds on hand to survive a little while without our beloved (desperate?) trips to the store because the potential for a disruption to our very fragile infrastructure and/or supply-chain is always there. Grid failures, sudden bush-wars, (Especially when you have an Emperor rather than a President - - OK, OK, I'll admit that several times a day he really is the smartest man in the room, after all, I assume he goes to the bathroom by himself. . .) hurricanes in the south and east, ice storms and blizzards in the north and northeast, tornadoes in the mid-west and south, flooding - well - flooding almost everywhere, earthquakes, wild-fires, volcanoes  - you get the idea.

Anyway, I didn't plan on this turning into an alienating rant so now back to our regularly scheduled programming.

It's time to leave the Cochise Stronghold Campground and head on over to Sierra Vista this morning to re-supply and see about hooking up with a fellow blogger.

To get from here to there I have a few choices. 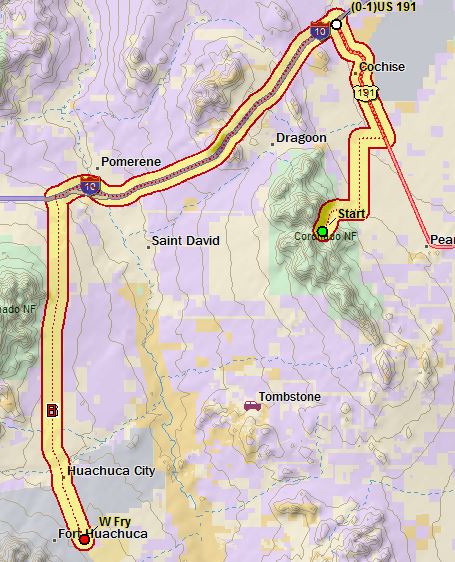 Take the obvious, and safest, and highwayiest and boringest route, about 80 miles end to end, around the northern end of the Dragoons then down the west side of the San Pedro Valley, 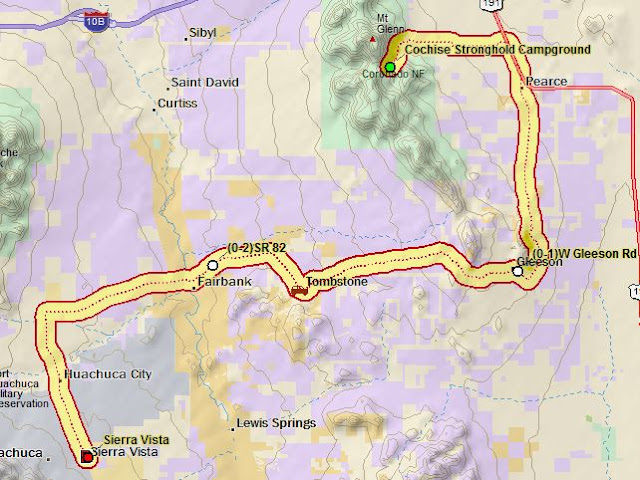 take the less boring but still safe, about 70 mile, route around the south end of the mountains and across Gleeson Road, (This is the route The Cowboy and the Southern Bell of Restoration Cowboy Style, bloggers with a winter home in the area, seem to use during building-supply runs so it must be safe, or at least safe-ish) 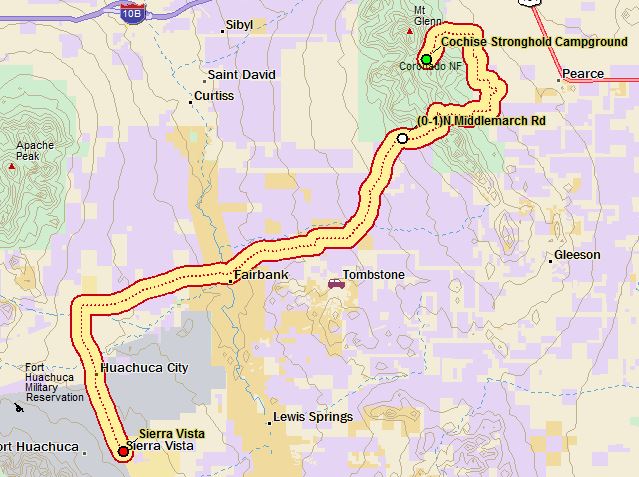 or I could grow a pair and take the 55 mile route across Middlemarch Pass on a three number Forest Service road. (Forest Service roads come in 2, 3, and 4 number roads. Generally the higher the quantity of numbers the less road-like the road is.)

One of the benefits of growing older is that I no longer feel the need to prove that I have a big dick, (At least not all the time.) an urge that is almost undeniable for young and middle-aged men, and, admittedly, a surprising number of older men too.

Why else do you think we're prone to shooting guns at every opportunity, putting unnecessary lift-kits and ridiculously large tires on our rides, lighting the biggest fireworks available, running the loudest exhaust we can get, and prefacing so many stupid stunts with "here, hold my beer"?

But at the same time I've been age-mellowing out I have also become aware that my opportunities for do-overs are diminishing. 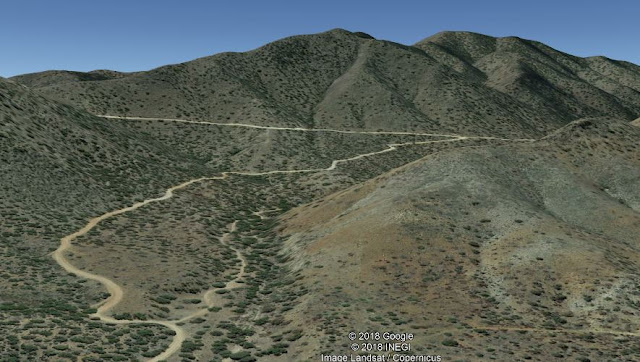 So what it boils down to is, if I don't attempt the pass now will I actually have another chance later? And if not is the future regret of not going for it when I had the opportunity going to outweigh the short-term warm-fuzzy sense of security I get from taking the safe way around?

Well after days of waffling one way then the other to the point of exhaustion over this philosophical, as well as practical, question, I still wasn't sure what I was going to do as I pulled out of my campsite.

In fact it wasn't until I actually turned east towards Middlemarch Canyon Rd instead of continuing south on the wide pavement of US-191 to Gleason Road, that I knew for sure I was at least going to take a look at that route over the pass.

After all, I could always turn around if it proved to be too much for the size of my old-man balls. (Only that's not always true is it? Opportunities for turning around on these roads diminish in direct proportion to the decreasing quality of the road and it's easy to find that you have passed the point where you are irrevocably committed, whether you want to be or not!) 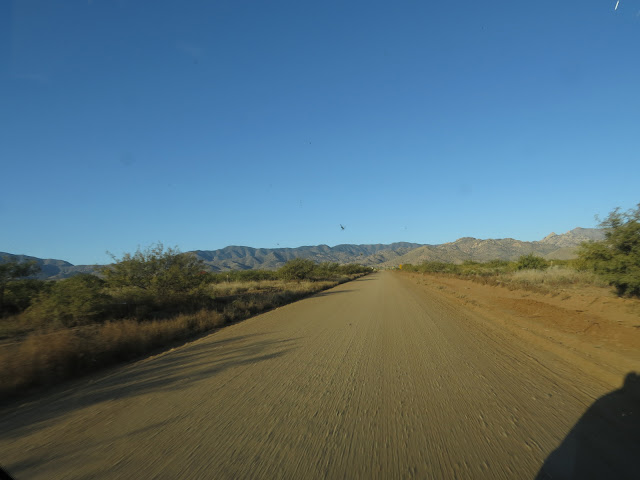 Pearce Road, which leads from the highway, through the remains of the ghost-town of Pearce and on to the eastern end of Middlemarch Road, is great, but the mountains are still a ways away here. 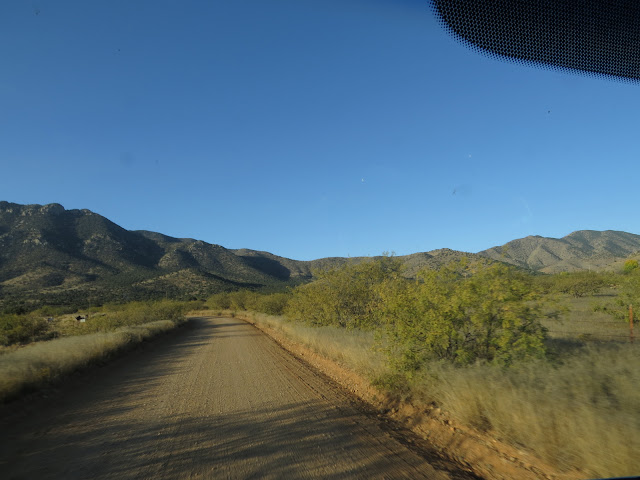 Middlemarch Road is narrower, but still pretty much an any-vehicle-you-want road here in the valley outside the National Forest boundary. 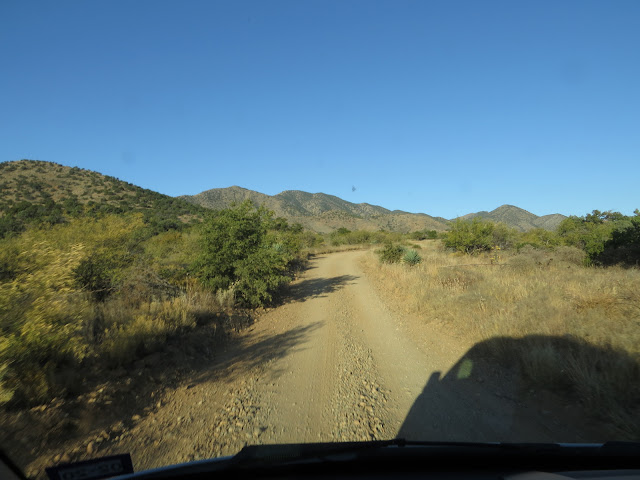 OK, now we're back inside the National Forest and the road has abruptly narrowed to a single lane, though down here in lower end of the canyon there's still plenty of flat-ish ground alongside to move out of the way of oncoming traffic. - - Or to turn around and take the more sensible route - - 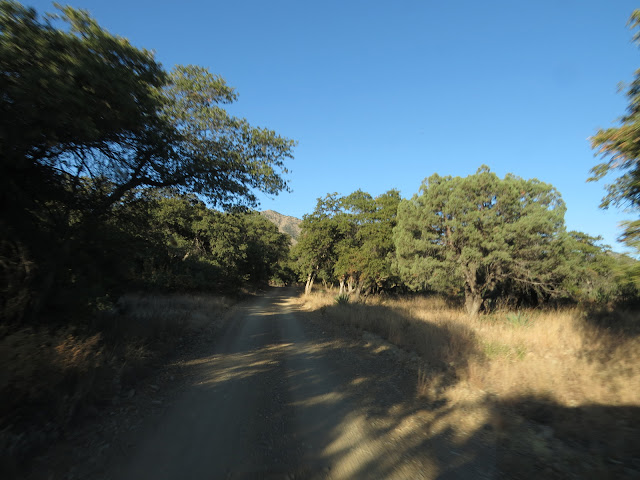 The road gets a bit tighter as I get further into the canyon, but the grades have been minimal so far. Which, come to think of it, is actually pretty worrisome since I have to gain 1000 feet of elevation to reach the pass regardless, so delaying the climb simply means the grades out in front of me are going to be that much steeper.

So far the road has looked pretty dang good in these photos, but remember, I'm far less inclined to take photos when trying to negotiate the butt-puckering more challenging spots. . . 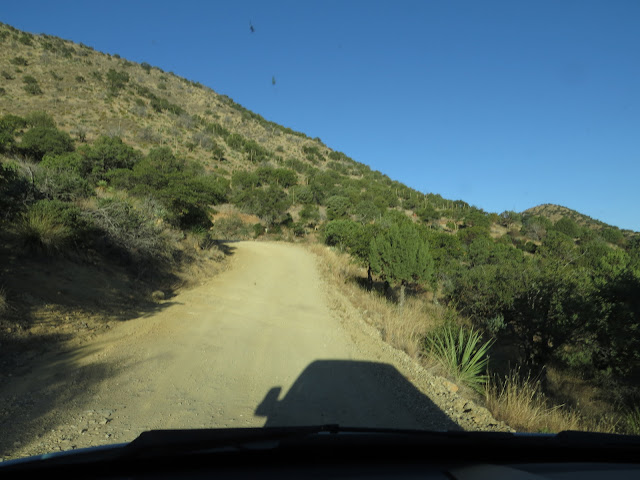 Oh yeah! You can't really see it in the photo, but now we're climbing!

The nice thing about true 4-wheel drive vehicles is the ability to shift down into the Low range when confronted by steep grades that require a lot of pulling. - - Huh? Oh that's right. The Van is 2-wheel drive - - My bad.

Fortunately for me it's also a diesel and develops its max torque at a mere 1400 RPM. That's about 6 MPH in first gear, which is good when you are trying to lift a 7000 pound van up steep and rocky "roads". (Horsepower is what determines how fast you can hit the wall, torque determines how far you can power your way through the wall once you hit it.)

But you see that turn up ahead?

That's the sharpest, steepest switchback in the road, so I have to put the camera down now because in a moment I'm going to be (hopefully!) up behind those bushes on the left side of the photo. 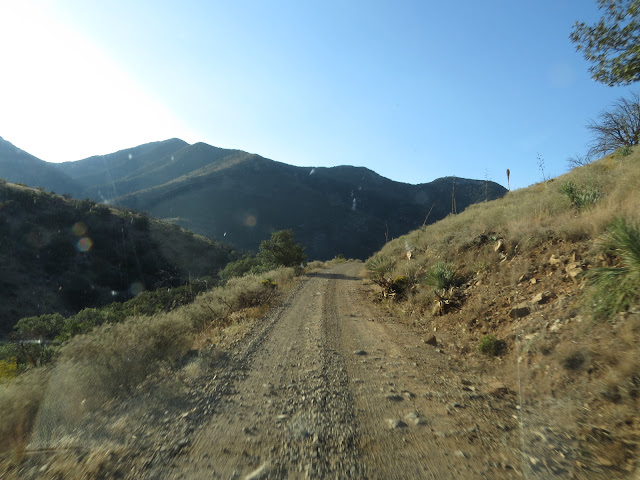 OK, we made it around the switchback and after I get around that there curve up ahead the pass itself shouldn't be too much farther. At least that's what I'm hoping since I've already kinda exceeded my excitement quota for the day. . .

But it is still steep here and these rocks embedded into the road might cause a bit of a traction issue, so it's time to down-camera again.

Depending on ambient air temps, under normal circumstances The Van runs a coolant temp of 196 to 204. Right now she's holding steady at 225, which, while significantly higher than normal, is well below the 250 degree max and even a safe distance below my personal limit of 240. (Of course, up here just how the hell would I pull to the side and let things cool down if I do hit that 240 limit?) 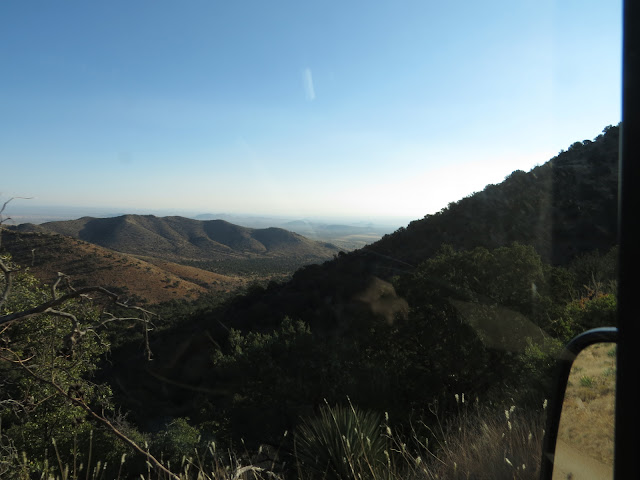 This final stretch up to the pass is an iffy bit of road, with no place to make-way for opposing traffic, though technically, since I'm upbound, I'm the one with the right-of-way, (This is normal protocol because it's safer for a downbound vehicle to back up against the force of the engine than for an upbound vehicle to coast down backwards relying completely on brakes for control.) though we all know that there are people out here that take their cut out of the middle and to hell with everyone else, but I risk it anyway and stop to roll the window down and take a quick photo of where I just came from, though the road below, just underneath the drooping tip of that branch on the left side of the photo, is difficult to see in the shadow of the ridge.

And yes, I'm holding onto the camera real tight because if I drop it right here it's definitely gone! 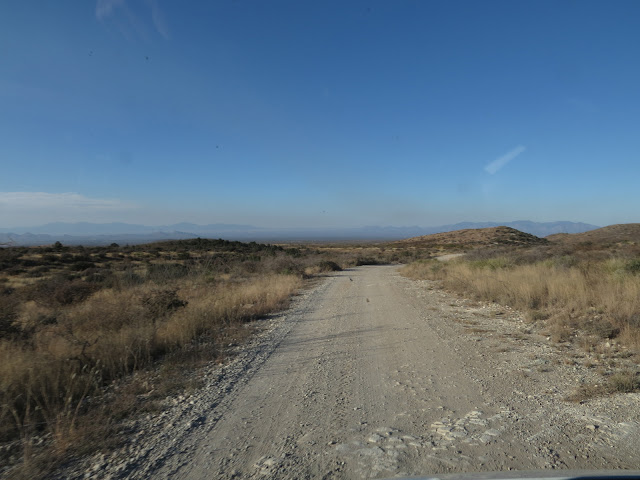 OK. I just topped over the pass and there's an immediate improvement in the road in both degree-of-grade and 'move over' (or turn around!) opportunities. 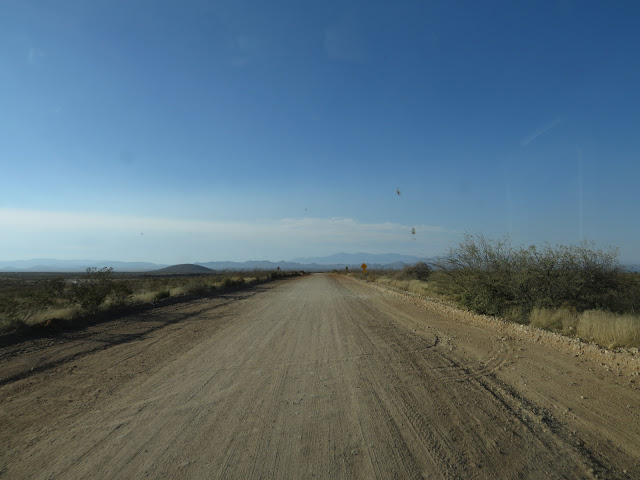 where the road once again becomes spaciously wide and smooth.

See those wide shoulders? See the wheel-tracks in the one on the right? These shoulders are smoothed out regularly and the border patrol likes to drive the wrong way down them with their head hanging out the window looking for foot-tracks in the dirt.

I thought about it, but only briefly. OK. Honestly, it wasn't really all that hard to resist the urge to pull over and lay down a bunch of boot-tracks that looked like they were crossing the road and disappearing into the desert. . .

These border-guys have no sense of humor and though I may have proved that I'm carrying a pair (More likely missing a few marbles!) by crossing the pass in The Van, my balls aren't that big!

So it wasn't a walk in the park, in fact of the three passes I have, or will, cross on FS roads this trip Middlemarch, though not the longest or highest, was probably the most challenging in terms of combined road-surface and grade - and pucker-factor.

I certainly wouldn't recommend that any but the more robust of class-Bs or shortest of trailers behind a good strong vehicle attempt it, and perhaps not even those if 2-wheel drive and powered by a gasoline engine. And trying to drag a 'normally' constructed (read thrown together as quickly as possible with cheap materials and staples)  travel-trailer over the pass is just begging for tossed contents, busted furniture, failed appliances, and leaking windows as the road-surface thrashes things around back there - assuming you don't fall off the road first that is.

Now, what do you mean you drank my beer?!!